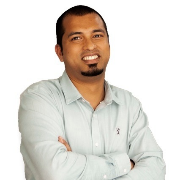 Cultural and historic highlights of the United Arab Emirates

When you think of the United Arab Emirates, the glitzy shopping malls and gleaming skyscrapers of the nation’s modern megacities almost certainly spring to mind. However, the country’s rich culture and history can still be discovered, even in the heart of Dubai and Abu Dhabi. 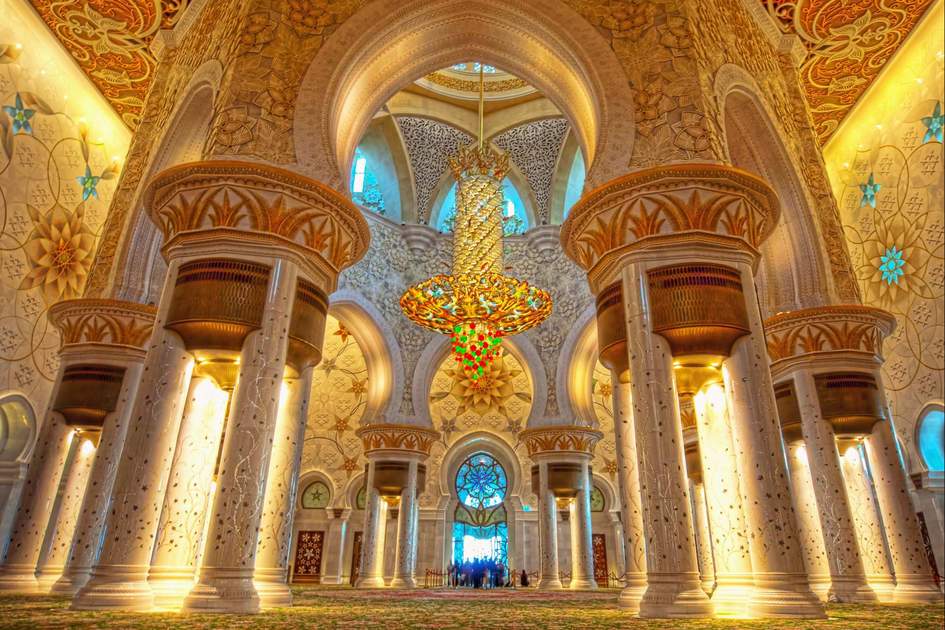 Dubai and Abu Dhabi, in the popular imagination at least, are more concerned with racing to build the world’s tallest building than with cultivating and celebrating their own culture and history. Dubai in particular has a reputation of being a product of the recent past, with striking aerial photos showing how the modern city seemingly sprang up from nowhere in the mid-20th century, a humble fishing village transformed into an oasis of wealth and modernity on the frontier of the Arabian Desert.

All of this, of course, is true – and the UAE’s ravenous, oil-fuelled appetite for development is undeniably striking when experienced up close, enchanting and disquieting in equal measure. For many visitors, though, all the shopping, dining and air-conditioned convenience can obscure the country’s history and culture. Here we take a look at the cultural and historic highlights of the United Arab Emirates.

On the banks of Dubai Creek, north of the glitzy hotels of Jumeirah and the artificial islands of the World archipelago, lies the historic heart of the city. A good place to start exploring is the Dubai Museum, where reconstructions of souks, palm-thatched barasti houses and fishing and pearling boats give a feel for what life was like in the region before oil wealth ushered in the new age; archaeological finds exhibited here stretch all the way back to the Bronze Age. Fittingly, the museum is housed in the oldest building still standing in Dubai: the Al Fahidi Fort, which was built in 1787 and resembles the square, circular-towered forts which dot the deserts of neighbouring Oman like enormous sandcastles.

Having learned about the region’s history, explore the wider Al Fahidi Historical Neighbourhood, which sprawls to the east of the museum in a convoluted maze of winding alleyways, open courtyards and traditional buildings, today housing art galleries, cafés and teahouses. Keep an eye out for barjeel, the quarter’s distinctive square wind towers which rise above the rest of the buildings. These ingenious pieces of engineering were an early form of air conditioning, catching cold air at the top and funnelling it down to keep houses and buildings cool in the desert heat. 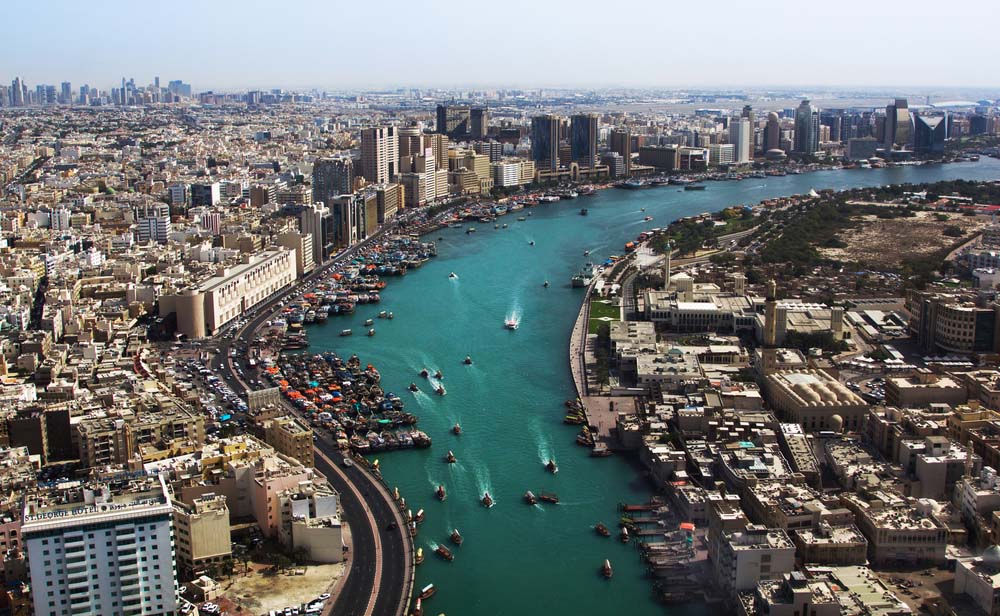 For all the column inches devoted to space-age edifices like the Burj Khalifa, and for all the dirhams amassed every day through the cathedrals of consumerism that are Dubai’s modern shopping malls, the traditional influence of Islam continues to hold sway over daily life here. The Bur Dubai Grand Mosque is testament to that fact – a bone white complex whose buildings are topped with more than 50 domes, and the city’s tallest minaret. Non-Muslims cannot enter the main building, but they can ascend the minaret to take photos and appreciate the views over the city.

Next door is the Textile Souk, where wooden pillars, stone walls and a thatched ceiling frame rows of stalls piled high with spices, fabrics, and ceramics and presided over by pushy shopkeepers – a more memorable, if less relaxing, retail experience than most on offer in Dubai. The city’s shipbuilding yards at Al Jaddaf, meanwhile, where traditional dhows are stitched together from teak and rosewood, offer a chance to see a time-honoured craft tradition in action before it disappears forever. 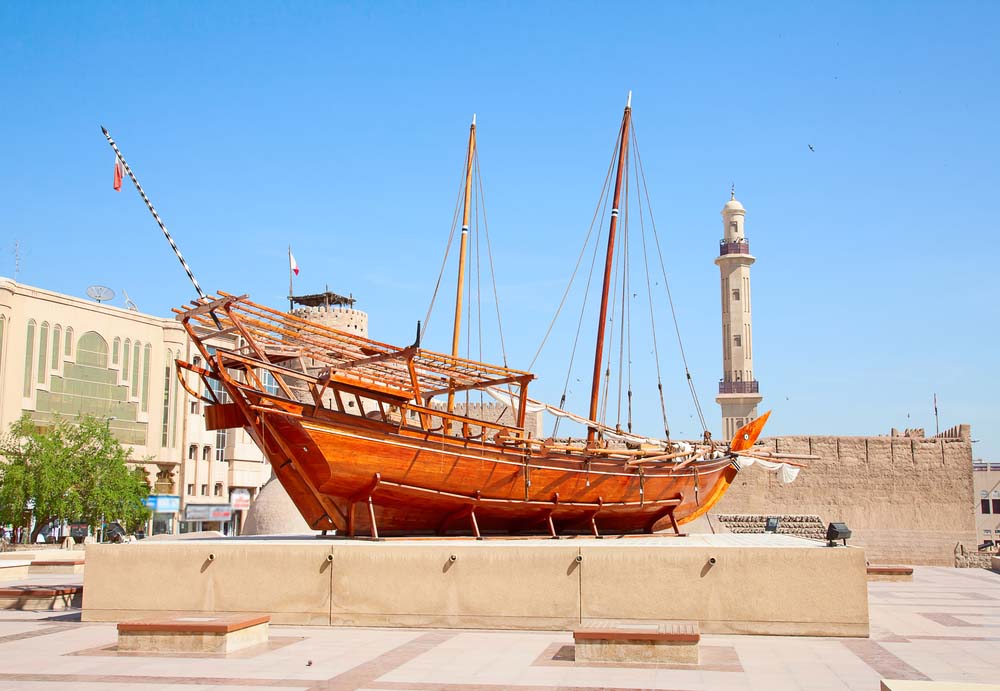 The country’s capital city, Abu Dhabi, makes clear the fact that the UAE’s staggering wealth and fast-paced development is by no means divorced from its traditional cultural life. The Sheikh Zayed Grand Mosque, named after the nation's beloved father, is among the most impressive mosques in the world: nearly 100,000 tonnes of pure white marble, propped up by ornately gilded pillars and reflected back in serene mirror pools – the whole thing is an exercise in taste and balance.

It’s also unusual among mosques in the region in being open to non-Muslims, with free guided tours giving an insight into the story of the mosque and its many standout features. These include the world’s largest carpet (hand woven by thousands of Iranian artisans) and some of the world’s largest chandeliers – featuring millions of Swarovski crystals – the largest weighs in at 11 tonnes. For a more down-to-earth experience of traditional life in Abu Dhabi, the Heritage Village offers a striking snapshot of life before the riches from oil flooded in, with Bedouin tents, palm houses, and artisans creating glassware, textiles and pottery. 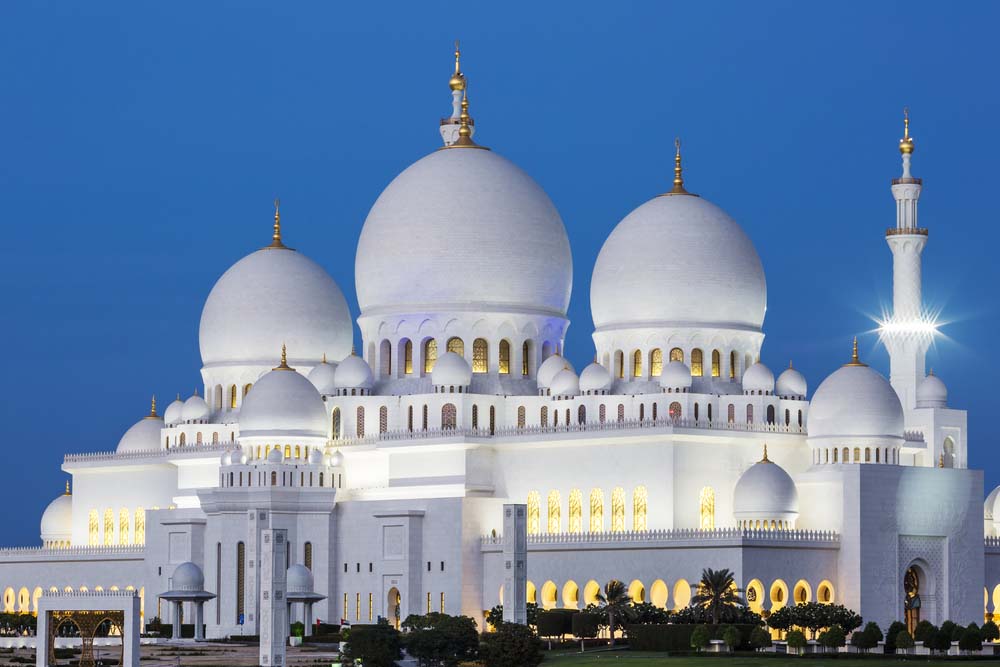 While Dubai and Abu Dhabi offer plenty of opportunities to taste the traditional life of the UAE, it becomes even easier as you venture away from the big cities. Al Ain (‘The Spring’), a 90-minute drive inland from Abu Dhabi, is a cluster of green oases surrounded on all sides by the parched expanse of the Arabian Desert. Once a vital stop on caravan trading routes, the area has been inhabited for more than four millennia and is a treasure trove of archaeological riches.

In the north of the city lies the Hili Archaeological Park, where circular tombs were left behind by the Bronze Age Umm an-Nar civilisation as long ago as 2500 BC. The appealing chaos of the city’s camel market, meanwhile, offers a glimpse into one of the Middle East’s great sporting obsessions, with the chance to watch future camel racing champions being sized up, bought and sold along with cows, sheep and songbirds. Afterwards, head back into the city to decompress at the serene Al Ain Oasis, where thousands of date palms, still fed by millennia-old falaj irrigation channels, shade winding pathways which offer some escape from the heat of the sun and the bustle of the city. 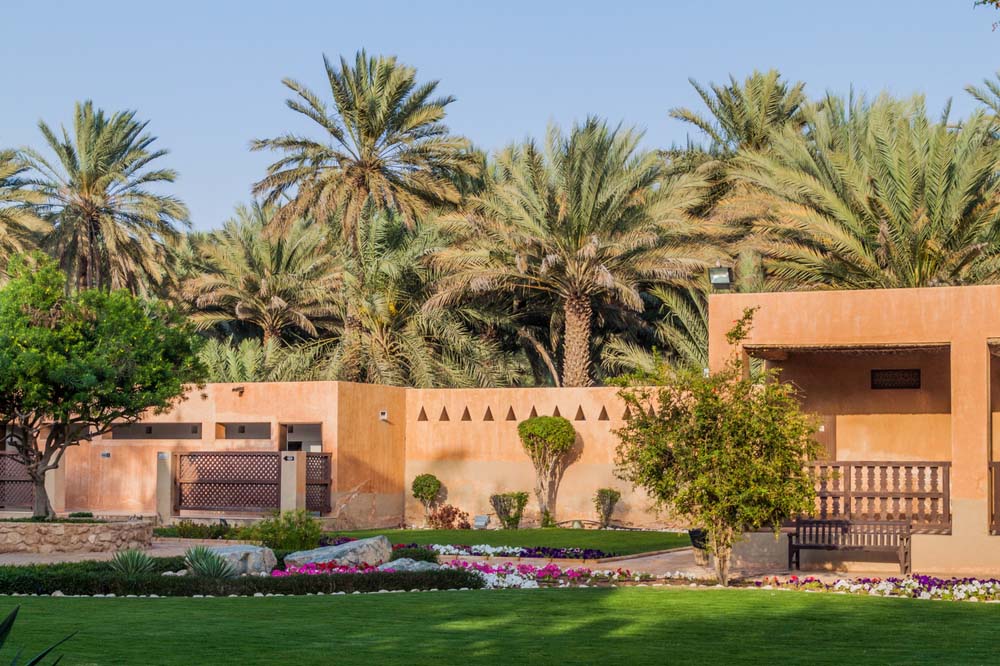 Venture to the country’s less visited corners and yet more tradition and history reveal themselves. Sharjah is officially the Arab region’s Capital of Islamic Culture, and it has the institutions to match, from the in-depth Museum of Islamic Civilization to the superb Sharjah Art Museum – housing perhaps the finest collection of Arabian art in the world. The dhow yards, rustic forts and traditional markets of low-key Fujairah, Ajman and Umm al Qaiwain feel even further from the glitzy malls and beach resorts which so often define the UAE in the popular imagination. All leave no doubt that, beneath the future-facing glitz and glamour, lies a country with a rich heritage easily accessible to visitors, but all too often overlooked. 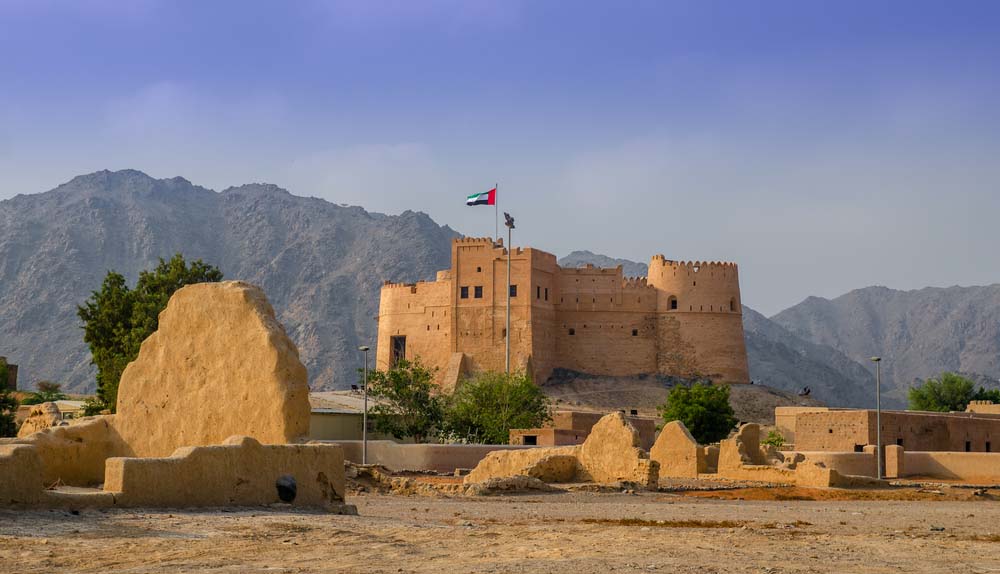 Ready to take a trip to the United Arab Emirates?

Our local experts can help you to plan and book unforgettable trips to the UAE. Simply get in touch to let us know your ideas for the trip and when you would like to travel. We will then create a personalised itinerary that you can amend until you're completely happy with every detail before booking. Take a look at our existing itineraries for inspiration, and keep in mind that they can all be tailored to meet your own specific needs.