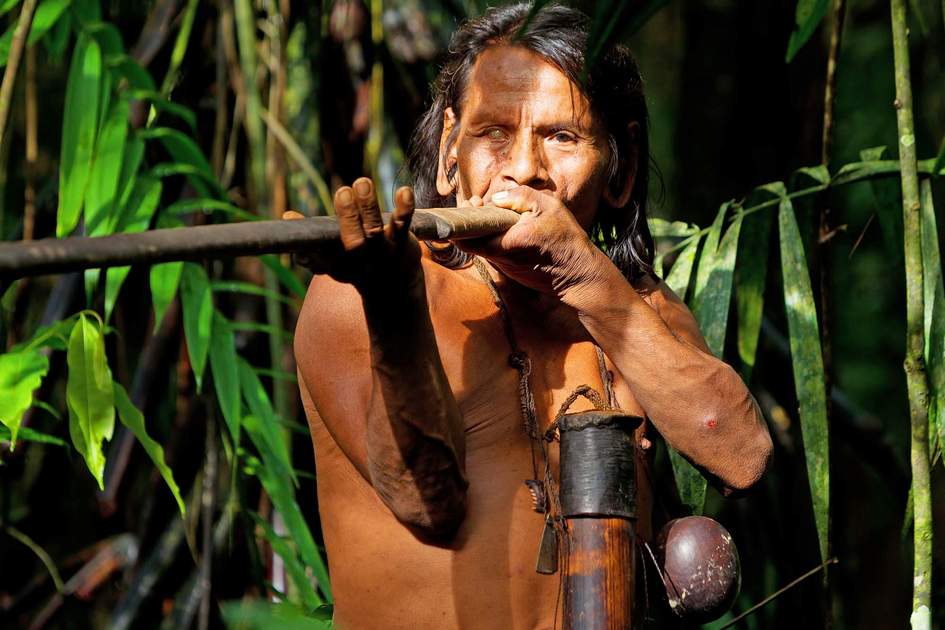 As part of our focus on Ecuador as Destination of the Month, we look at the country's few isolated Amazon tribes. Despite legislative protection, the outlook for them is bleak, due to the onslaught of the modern world.

At most, there are just 400 tribes believed to be living in Ecuador’s northeast Amazon refusing contact with mainstream civilization. Most of the evidence known of these rainforest warriors still clinging to their Stone Age way of life stems from violent encounters. In 1987, as oil companies encroached on land inhabited by the Tagaeri people, Coca’s Spanish-born bishop Alejandro Labaka sought to contact them in a last-ditch pitch for their survival. He and Inés Arango, a Colombian nun, gave their lives in the attempt as they were found dead. The ensuing media exposure, however, kept the oil industry at bay, as Labaka had hoped.

Nevertheless, conflicts continue. Many of the Huaorani people today work for oil companies or in tourism; some also work with the loggers. Through 2008, poachers of rare rainforest woods were found dead, fatally wounded by the Huaorani’s heavy spears. Encouraged by loggers and poachers, in March 2003 a group of Huaorani sought to avenge a Tagaeri “kidnapping” by killing up to 30 forest dwellers, including women and children, who were burned to death inside a large dwelling. But the dead were members of the previously unknown Taromenani who had moved into the jungle building abandoned by the Tagaeri. The judicial authorities did almost nothing to investigate the Taromenani killing.

Members of the two tribes are so few that they fit inside just a few homesteads, each of which can house some 60 people. While these can be widely dispersed amid the jungle, pressure from the 21st century is great from inside Ecuador and from across the border in Peru.

Aware of the race against the clock to save the two tribes, the Correa government has set up half a dozen control posts staffed with police and scientists to stop access to the “intangible zone” established for their protection in and around the southern part of the Yasuní National Park. The government also says it is doing more to control the boom in the smuggling of hardwoods to the US and Colombia.

Most oil companies demand proof of vaccination and special permits from visitors in an attempt to protect the tribes from the common diseases that eradicated so many other natives since the arrival of the first Europeans. Contact with anyone from tourists to other tribes could wipe them out in one devastating epidemic. To the exasperation of the government, however, the “intangible zone” means nothing to the Tagaeri and Taromenani as they roam to hunt, and live in such proximity to the last outposts of mainstream society that they can steal machetes and axes from nearby tourist lodges and illegal logging camps. Despite their recent “discovery,” the modern world has already influenced the Taromenani, who use plastic string and bottle caps to decorate their spears and necklaces.

Environmentalists say that current steps to protect them are too little too late. Some advocate a more aggressive, pre-emptive attempt to vaccinate them against disease before a plague can break out. This, however, would end their isolation, exposing them to the cultural dislocation that has affected other peoples, particularly the Cofan and Huaorani, who also first encountered Western society only a few decades ago. Such is the pressure from the greedy outside world that their traditional way of life will almost certainly end in the foreseeable future, even if they are to survive.

This month we're posting a Panama-hat-ful of fascinating articles about Ecuador, including a guide to the best islands to see in the Galápagos, Ecuador's vanishing rainforest, and the country's impressive volcanoes.