The A6 from Colombo to Trincomalee meets the A11 bound for the east coast at Habarana, making it an ideal starting point for a drive combining the elephant country of Minneriya and the ancient ruins of Polonnaruwa... 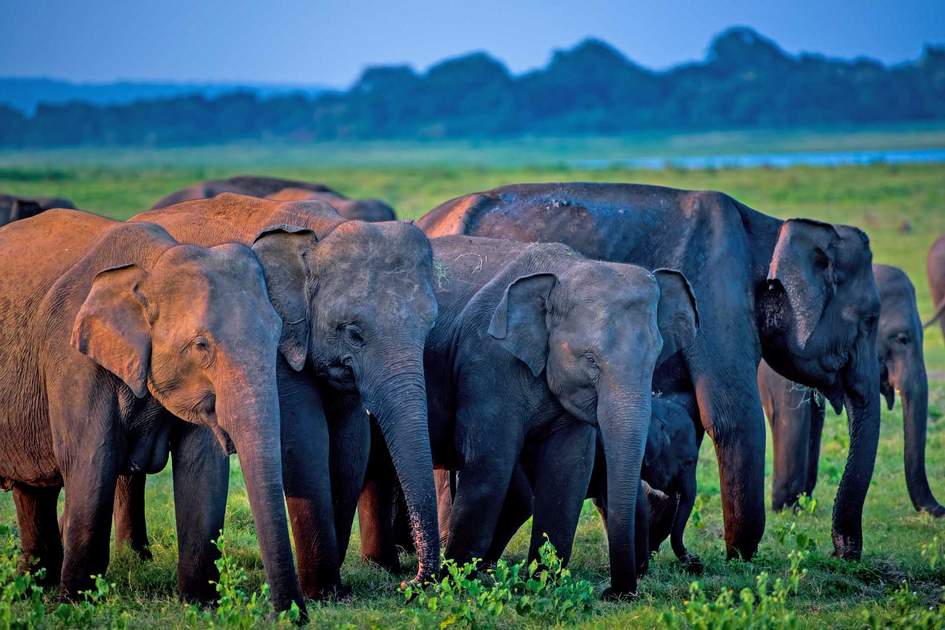 From Habarana, start early to have the best chance of spotting wildlife in Minneriya and head off along the 43km (27-mile) stretch of road from the Habarana junction towards Polonnaruwa. This is one of the loneliest roads in the area and it’s not unusual to see wild animals, including deer, monkeys and iguanas, along its length. Now a quiet town, Polonnaruwa was at its zenith of power and glory in the 11th century and was the island’s capital city for 200 years.

Drive northwards to the Habarana Junction to join the A11 to Polonnaruwa and the east coast. At the 32km (20-mile) marker, a car park on the southern side of the road marks the entrance to the Minneriya National Park (daily 6am–6pm; charge). It is best to visit the park very early in the morning or after 3pm to see the most wildlife. The fascinating museum (daily 6am–6pm; entrance with park ticket) is also worth seeing for its wildlife relics, including elephant and lake-crocodile skeletons.Visit Minneriya National Park and see the elephants with Insight Guides' Sri Lankan Wildlife Discovery trip.

During the dry season, as rivers and lakes dry up across the surrounding areas and waterholes turn to baked mud, more than 300 elephants converge on the retreating waters of the Minneriya Tank at the centre of the park. This massive meeting of elephants – popularly known as ‘The Gathering’ – is the largest of its kind in Asia, as pachyderms from across the region converge on one of the region’s last reliable sources of water, travelling from as far away as Trincomalee to drink, eat, socialise and search for mates. The Gathering takes place from July to October every year (best during August and September), although wild elephants can be seen year-round in the park – and even beside the road. 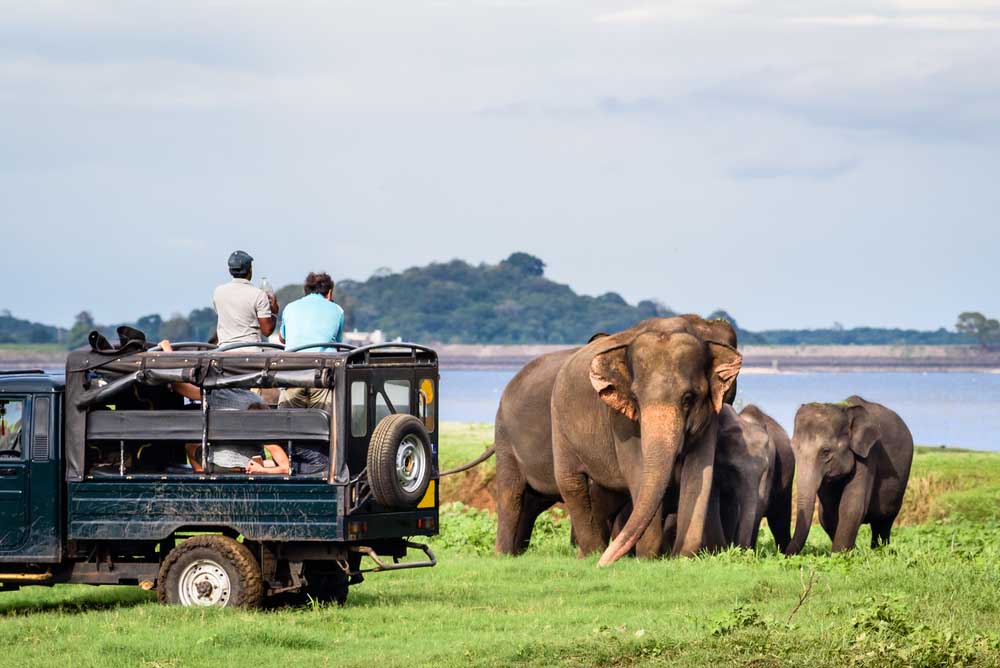 On the road to Polonnaruwa, look out for unusual yellow road signs warning of land monitors crossing the road – a startling sight as they scuttle away from approaching traffic. About 1.5km (1 mile) before Polonnaruwa, the remains of ancient ruins and centuries-old brick walls suddenly come into view on both sides of the road.

Continue until you reach the turning south to the enormous Parakrama Samudra man-made lake. Queen Elizabeth II herself spent a night here in 1954, and it remains a good place to stay or just visit for a light lunch of rice and curry or fresh fish straight out of the waters below. Visit Polonnaruwa as part of Insight Guides' Culture and Coast trip.

Stretching out in front of the rest house, the Parakrama Samudra (Sea of Parakrama) A is a vast reservoir of water created by the legendary Parakramabahu (1153–86), Polonnaruwa’s greatest king, who famously proclaimed that not one drop of water should escape into the ocean without it being of some service to man. Today, as it was in ancient times, the reservoir is the lifeblood of the region, providing precious irrigation water for some 7,365 hectares (18,200 acres) of paddy land.

Drive south along the lakeside Pothgul Mawatha (Bund Road), constructed on top of the lake’s embankment. After about 1.5km (1 mile), a small gate on your left opens into a park (daily; free) where you’ll find one of Polonnaruwa’s most famous relics: a 12th--century statue B of a man holding a scroll thought to be either King Parakramabahu himself or Agastaya, an Indian religious teacher.

Return along Pothgul Mawatha to the Polonnaruwa Museum (daily; 9am–5.30pm; charge) beside the embankment to purchase a ticket to view the ruins. As you enter the main archaeological site, the impressive remains of King Parakramabahu’s Royal Palace (Vejayanta Pasada) are to the right. Of the original seven floors, only three remain. A staircase leads nowhere, but its former grandeur can be imagined.

In front of it is the Council Chamber. Some fine elephant carvings have been preserved, but even the best craftsmen make mistakes – look for the five-legged elephant near one of the entrances.

Nearby are the remains of the Kumara Pokuna (Royal Baths), an exquisite stepped bath of cut stone. Underground stone conduits feed it with water from the Parakrama Samudra. Only two of the original five crocodile spouts for water are still intact.

A number of ruins are concentrated in the Quadrangle, a short walk to the north. Climb the steps to the Sathmahal Pasada (Seven-Storey Dagoba) on the right. Its former seven floors show a distinct influence from Burma, with which King Parakramabahu established meaningful contacts.

Next to the Sathmahal Pasada is the massive 9m (30ft) long Gal Potha (Book of Stone), one of the longest and heaviest of its kind in the world. The enormous slab of stone, 1.5m (5ft) wide and over 60cm (2ft) thick, is inscribed with the great achievements of Parakramabahu’s successor and nephew, Nissankamalla, who indulged in an orgy of monument- and temple-building in a bid to outdo his uncle. A footnote reveals that the Stone Book was brought from Mihintale, over 100km (60 miles) away. The 25-ton book is believed to have been transported to its present site on wooden rollers tugged by elephants.

On the other side of the Hatadage are the fragmentary remains of the Atadage, built by King Parakramabahu’s predecessor, King Vijayabahu, which once housed the Buddha’s tooth. The altar opposite the Buddha image is believed to be where King Nissankamalla listened to Buddhist discourses.

The Thuparama temple, the only building in the Quadrangle with a roof, contains nine statues of the Buddha. One is broken but others, made of quartz and containing mica, glisten magically in the light of a candle or torch. One statue is believed to have had gems embedded as eyes which emitted strange rays when sunlight streaked in from specially constructed angled crevices.

Leave the Quadrangle, head north and turn right at the first crossroads towards the Shiva Devale, a circular relic house where the yoni and lingum, symbols of fertility, are worshipped by Hindu women seeking blessings for conception. Return to your vehicle and drive north to the Rankot Vihara (Golden Pinnacle), a colossal red-brick dagoba standing 40m (125ft) high with a circumference of 170m (550ft). The remains of the Alahana Pirivena (university) and the Royal Burial Grounds are located nearby.

Drive to the car park and alight to visit the well-preserved Kiri (Milk) Vihara, a dagoba named for the milk-white stucco that once covered the entire dome, and the image house, Lankatilaka, which has thick 17m (56ft) walls and a head-less statue of the standing Buddha. Across the road is the Gal Vihara (Rock Temple), home to an exquisite quartet of 11th-century Buddha statues, carved out of sheer rock, including a huge reclining Buddha, 14m long but extraordin-arily graceful, despite its dimensions.

Taking a trip to Sri Lanka: how to get started

Insight Guides can help you with the planning and booking of your trip to Sri Lanka. You can browse our existing trips to Sri Lanka here. Alternatively, simply get in touch with us, tell us your interests and budget, and our local experts will tailor a Sri Lankan itinerary to your suit your individual tastes. You can then adjust your itinerary until you are completely happy with it!

Looking for more things to do in Sri Lanka?

When to go to Sri Lanka

We were incredibly well looked after and truly enjoyed touring this beautiful country. Car was spotless, clean, and comfortable.