How to explore Tokyo's Asakusa district

Experience the lively atmosphere around one of Tokyo's most famous temples on this walk through Asakusa, followed by a short cruise down the Sumida River to a beautiful bayside garden. 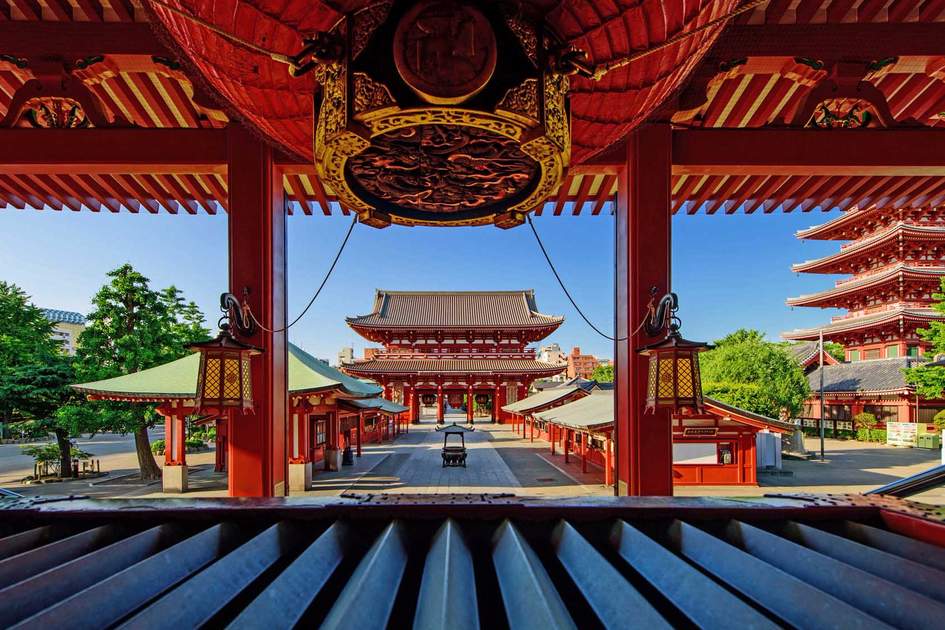 This traditional Tokyo district, north-east of the Imperial Palace and centred around the major Buddhist temple Senso-ji, has retained the bustling commerce in the heart of the Edo-era Shitamachi ('low-city'). Festivals are constantly celebrated here, and it's a great area for traditional craft and souvenir stores.

Enshrining a golden statue of Kannon, goddess of mercy – said to have been fished out of the nearby river in 628AD – Senso-ji is Asakusa's spiritual centre. The temple's central compound is best approached after passing under the Kaminari-mon (Thunder Gate), an impressive wooden entrance flanked by leering twin meteorological deities (Fujin, god of wind, on the right, and Raijin, god of thunder, on the left).

Stretching for about 400m/yds from Kaminari-mon to Senso-ji's main hall of worship is Nakamise-dori, a perpetually thronged avenue of colourful stalls selling an amazing variety of products, from the traditional (rice crackers and paper fans) to the bizarre (cloths for dogs).

Either side of Nakamise-dori you will find more of the traditional craft shops that make browsing around Asakusa such a pleasure. Beside Kaminari-mon to the right is Kurodaya in business since 1856, the shop sells traditional woodblock prints and wash paper products. Where Nakamise-dori crosses Denboin-dori, turn left to find Yonoya Kushiho on the left. The shop is much sought out for its traditional hairpieces, ornaments and exquisite boxwood combs.

Now head right from Nakamise-dori along Denboin-dori and turn left up Metoro-dori to arrive at Fujiya, specialising in tenugui (hand-printed towels with original designs). A little further up, to the right, Hyakusuke is another esoteric shopping experience, having supplied local geisha and Kabuki actors with cosmetics for more than 100 years. 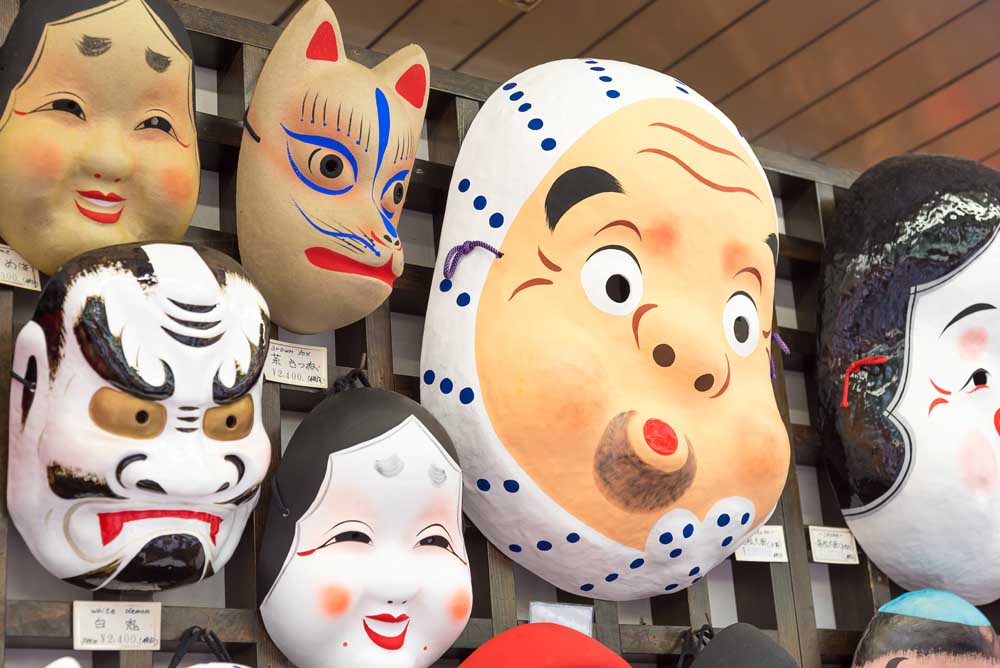 At the head of Nakamise-dori, a second gate, the imposing double-storeyed 0, disgorges visitors into the wide open grounds that surround the Senso-ji. Acrid clouds of incense waft from a large bronze burner that stands here. Visitors immerse themselves and their clothing in this 'breath of the gods' before mounting the broad stone-flagged steps that lead to the temple's main Kannondo hall.

Behind Kannondo, the Asakusa-jinja is dedicated to the fisherman brothers who found the Kannon statue back in the 7th century and their lord Haji-no-Nakatomo, who built the original hall to enshrine it in 645. Sadly, this remarkable golden image has remained hidden away in the inner recesses of Senso-ji ever since.

The western half of the Senso-ji compound houses Gojuno-to, an impressive 1973 reconstruction of a five-story pagoda first built at the temple in 942. Its towering vermilion outline stands beside the Denbo-in, the residence of Senso-ji's head priest. The building itself is closed to the public, but check to see whether access is permitted to the garden at the small booth just left of the pagoda.

West of Senso-ji lies Asakusa's raunchy entertainment district. Adult cinemas, strip clubs, old-fashioned public baths and street bakers are some of the features here. Another local institution is the rickety amusement park Asakusa Hanayashiki. Dating from 1872, most of the rides and game machines here have a certain vintage quality about them. There's also an eerie obakiyashiki (ghost house).

Just west of the amusement park, turn left and follow Rokku Broadway, a shopping street that runs parallel to the main Kokusai-dori. After you pass the department store ROX, turn right to the main road. Cross over and turn left to reach Miyamoto Unosuke Shoten, a shop with a huge collection of traditional Japanese festival wear and musical instruments. On the stores fourth floor an impressive display of percussion instruments constitutes the Drum Museum. Around the corner, to the right, is the popular Okonomiyaki restaurant Sometaro. 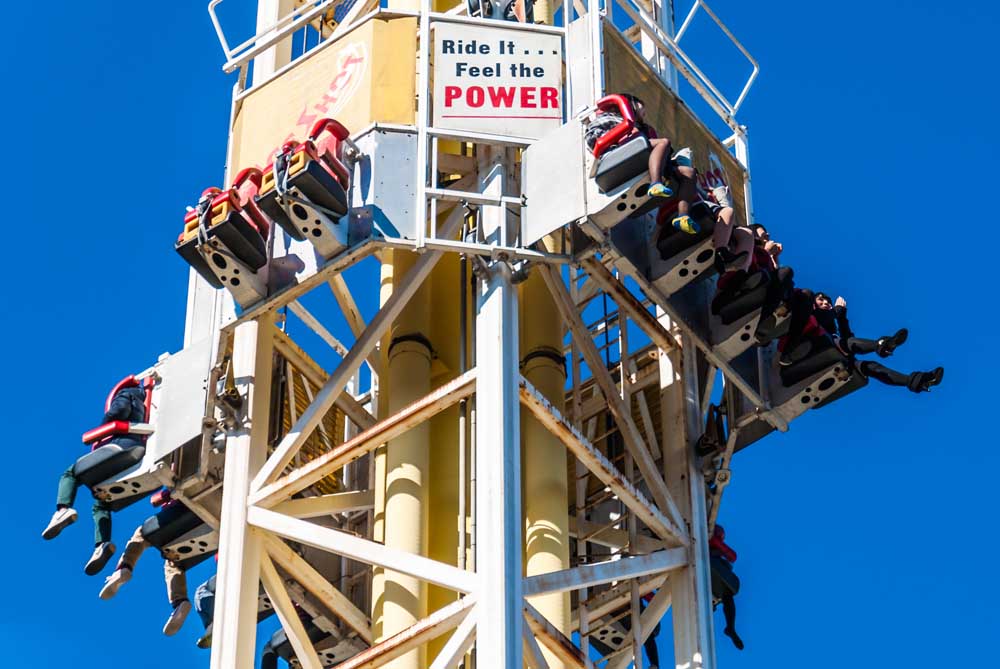 From Sometaro, keep walking a few blocks west past the rear of the temple Tokyo Hongan-ji to reach Kappabashi-dori, the heart of Kappabashi or Kitchenware Town, a wholesale restaurant equipment area. If you have ever wondered where those life-like plastic food displays in restaurant windows come from, here is your answer.

Return to Kaminarimon-dori and continue to the Sumida River; you can grab a drink nearby at either Gallery ef or the Venerable bar Kamiya. On the other side of the Azuma Bridge (Azuma-bashi) stands one of Tokyo's wackiest pieces of architecture - Super Dry Hall, a beer hall designed by Philippe Starck for the Asahi Beer Company. Is it more a sculpture than a building.

Asakusa also makes the best jumping off point for Tokyo Skytree. It's a 15-minute walk across the Sumida. Alternatively, you can get the train to Tokyo Skytree Station. Tokyo's newest landmark, the Skytree is a broadcasting tower that at 634m (2,080ft) is the second-tallest structure in the world. This feat of engineering barely broke a sweat during the 2011 earthquake. A visit to its observation decks, at 350m (1,148ft) and 450m (1,476ft) offers amazing views of metropolitan Tokyo out to Mount Fuji and the distant exurbs 70km (43.5 miles) away. 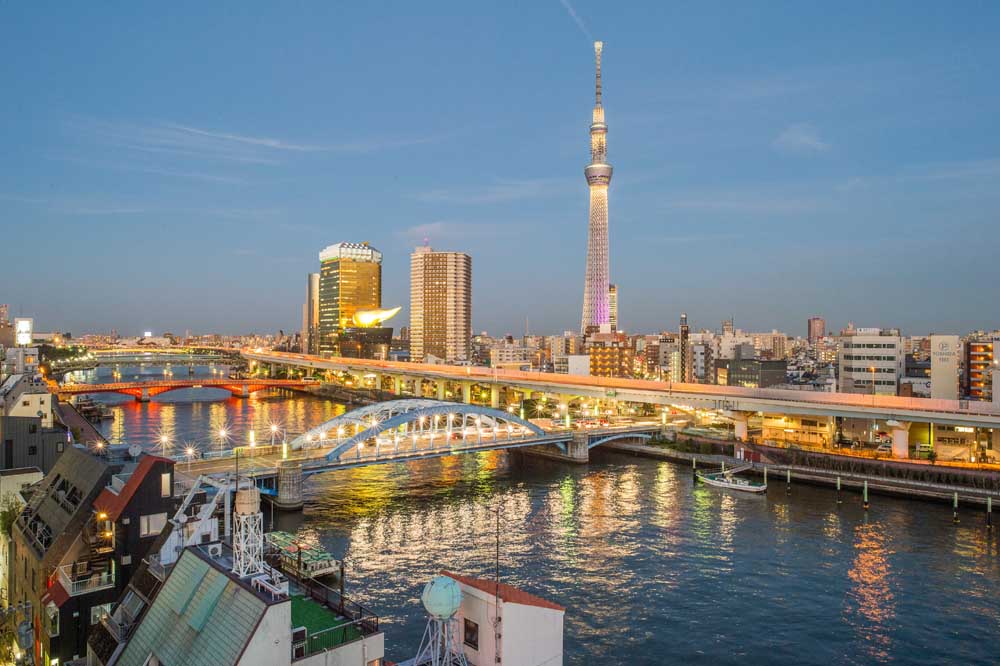 View of Sumida River, with the Tokyo Skytree in the background. Photo: Shutterstock