India is now, more than ever, a genuinely world-class culinary destination. From sugary sweets to Bombay duck, fresh Goan seafood to creamy curries, here are our top 10 Indian food experiences to try on your holiday 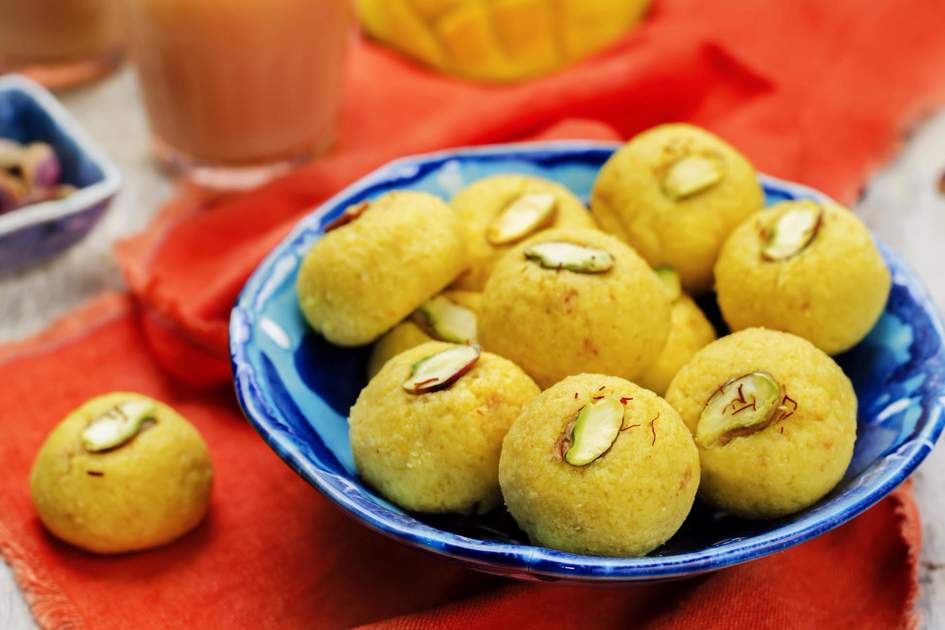 The rich variety of food that India has on offer will make your trip that bit more memorable. Visitors travelling to India having had Indian cuisine at home may be surprised to discover just how different the real thing is. A simple explanation for this is that the majority of what pass for ‘Indian’ restaurants abroad are, in fact, Bangladeshi, meaning they serve a cuisine similar in style to that found in the Indian state of West Bengal but are markedly different to that found elsewhere in the country. These food experiences will show you the punch, power and delight of genuine Indian cuisine…

Ahimsa, or non-violence, is one of the central tenets of the Hindu faith, and by extension includes the practice of vegetarianism. The variety of vegetarian dishes readily available in India is unrivalled.

The style of vegetable cooking is determined by the cereal or main dish with which they are served. Deep-fried vegetable crisps are perfect accessories to the sambar and rice of Tamil Nadu. The thick avail stew of Kerala cooked in coconut oil, or the kaottu in a coconut and garam sauce, are perfect for rice-based meals. Sarson ka sag, mustard greens, are eaten with maki in the Punjab, while the delicately flavoured chorchori of Bengal complements the region's rice and fish.

With such a rich and varied range of meat-free dishes in India, vegetarians may never want to go home. Book onto Insight Guides’ India: From Delhi to the Desert tour today and start your culinary discovery of the country.

Meals in the south revolve around rice, which comes in two forms: white and red (the latter being parboiled before it’s dried so that the grain absorbs the goodness of the husk). Rice is eaten with dal-based soups, thin and sour rasams, and thicker sambars, often flavoured with tamarind. Sambar powder gives them their fragrant taste, made of spices such as coriander and methi (fenugreek) seeds. They are finished by tempering: chillies and whole spices are heated in oil until the important black mustard seeds ‘pop’, then the flavoursome mixture is poured over the dish. Dry vegetable dishes are also served with rice, alongside yoghurt and fiery pickles. Uncover South India’s foodie secrets on our Magical Kerala trip.

Wander around the Khau Gullies (‘eating lanes’) of Fort or Churchgate at lunchtime or just after offices close: pao bhaji – a spicy tomato and red lentil mush served in a fluffy white roll – is a tired commuter's favourite. The other quintessential local snack is bhel puri – a scrumptious heap of rice, vermicelli, potato and crunchy pieces of puri mixed with chopped tomatoes, onions, coriander, and a twist of tamarind and lemon juice.

If you happen to be in Mumbai around Ramadan, make sure to visit the streets next to the Minara Masjid, just off Mohammed Ali Road. Here, the streets are given over to a lively night market, where Muslims from across the city come to break their fasts. A mouth-watering array of grilled kebabs, pungent curries and piping hot rotis are on offer, as well as racks of traditional milk sweets. The market gets into its stride around 9pm and lasts throughout the night. 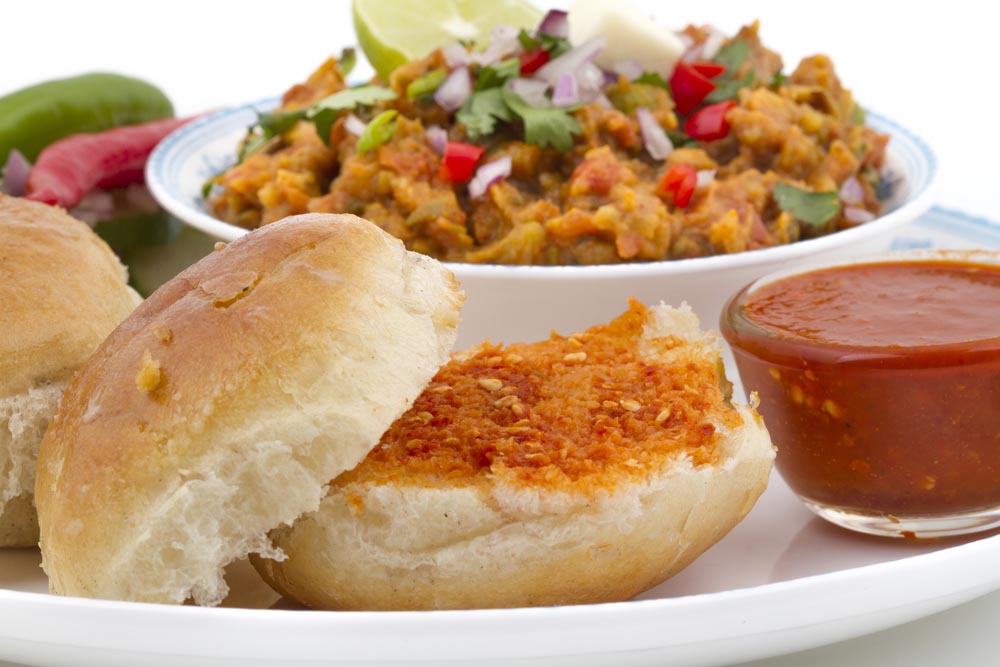 Pav Bhaji, an Indian street food snack and a must-try on your holiday. Photo: Shutterstock

Often too sweet for the non-Indian palate, the huge array of Indian confections and desserts are largely milk-based. Bengal is particularly well known for its confections. These include the rasagulla, sandesh, rasamalai and the steaming hot gulab-jamuns. Typical of the north are the barfis (milk cakes), some of pure milk, others of coconut or various types of nuts. Crisp golden jelabis, dripping with syrup, made even in the tiniest bazaars all over the country, are breakfast and teatime favourites. Tuck into the best of India's confectionary while enjoying Insight Guides’ The Essential Golden Triangle trip.

Muslim influence in India’s food repertoire is most evident in the cooking of meats. The fastidious Mughals transformed local recipes, developing what has become known as Mughlai cuisine, with its luscious sauces of dahi, cream and crushed nuts. An amazing variety is on offer, including the rich kormas and nargisi koftas (meatballs shaped around a hard-boiled egg) of Lucknow; the pasandas or mutton steaks cooked in almond sauce; the biryani, a layered rice and meat concoction famous in Hyderabad and a variety of kababs that literally melt in the mouth.

6. Drink a cup of chai or specialist tea

Today, India is the world’s second-largest producer of tea, after China. Around a century and a half ago, tea was only enjoyed by rural communities but has now become the national drink.

Specialist teas, such as Darjeeling and Assam, are rightly renowned, but chai might be the quintessential Indian tea. It is a sweet, spicy, milky tea, often served after a meal (usually in the North). Having a morning chai can also feel like an integral part of any train journey – especially after a bumpy overnight journey. 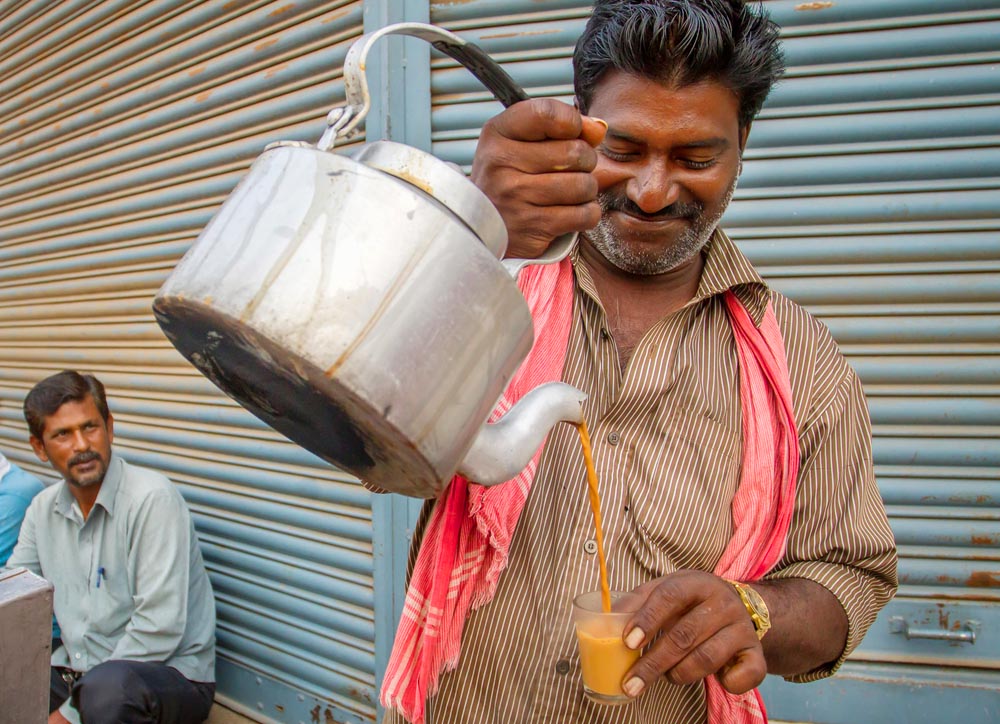 7. Get to grips with Bombay Duck

The very mention of ‘Bombay Duck’ may conjure up visions of fowl curry, but it is in fact the ‘marine lizard fish’, or 'bummalo' in Marathi. Thousands of bummalo fish can be seen drying on the rigging of trawlers moored on the quayside at Sassoon Docks in Mumbai – though be careful if you try to photograph them: the fish market stands next to an important naval base.

To serve, the fish is typically fried and presented as a starter, although it can also be incorporated into curries.

8. Brave the fire of Chettinad cuisine

To dismiss the notion that only mild vegetarian thalis are available in South India, try fiery Chettinad cuisine, which uses lamb, quail, crab and many unusual spices, pepper and lichen for flavouring.

The Chettinad region lies on the coastal plain between Tiruchirapalli and Madurai, homeland of the Chittiar merchant community. Their villages, now partly deserted, have some of the finest family mansions in South India. In the 19th century, the Chettiars were known as the bankers of South India, and their immense wealth was poured into gold, jewellery and, most impressively, their houses. While many Chettiars have left the area, their culinary legacy remains intact.

The Brahmin cooks of Udupi’s Krishna Temple are credited with originating India’s best-loved snack – the masala dosa. Made of semi-fermented rice- and lentil-flour batter, which is griddle-fried into a crispy pancake, dosas are one of many delicious, but labour-intensive, dishes served in ‘Udupi’ cafés in towns and cities across the country. Book onto Insight Guides’ India: From the Ganges to the Golden Triangle tour today and compare dosas from around India. 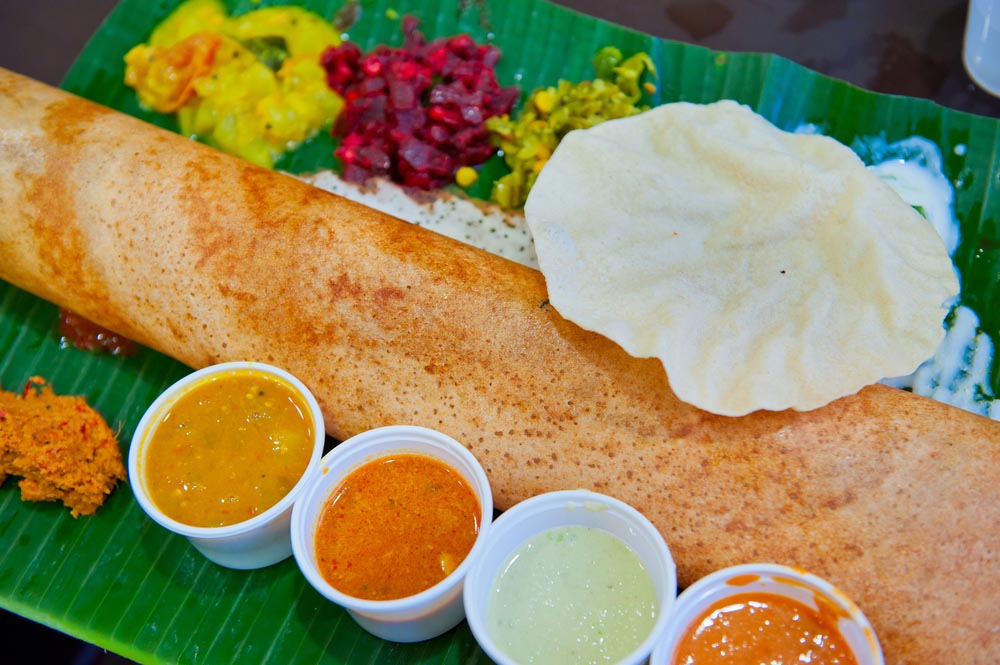 Dosa, a crispy savoury pancake from the south and a must-try Indian food. Photo: Shutterstock

Goan cuisine makes use of the fish and has a distinct Portuguese influence. Coconut, kokum, palm vinegar, chillies and cashews are also common ingredients in Goan cooking.

Goa is India’s most popular and renowned beach resort, and has its fair share of bars, restaurants and shops, too. For the freshest produce, eat at one of the local beach shacks, or a restaurant that displays the catch of the day. The menu might feature shark, mackerel, kingfish, pomfret, crab, prawns, oysters or squid.