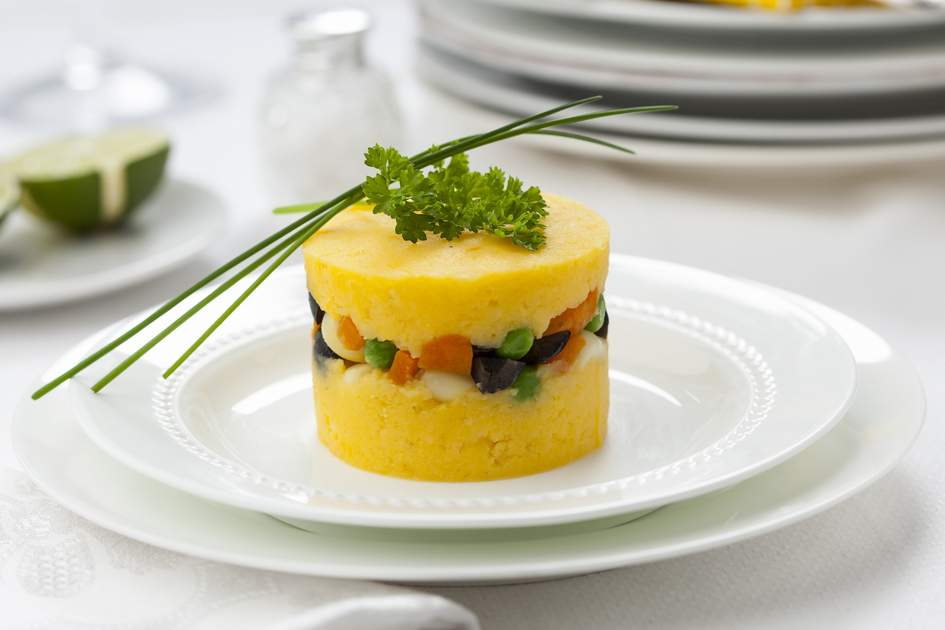 Causa rellena made from Peruvian potatoes.

The experimental and evolving trend of novoandina cooking has put Peru at the vanguard of Latin American cuisine. Highland ingredients once disdained as “Indian food” have been discovered by the Lima elite. Upscale restaurants now serve the high-altitude quinoa grain, along with delicious highland potatoes, aguaymanto, an acid wild Andean berry, and alpaca meat, esteemed for its low fat and cholesterol content.

Although he didn’t start Peru’s novoandina movement, no chef epitomizes the country’s culinary rise more than Gastón Acurio. Hands-on hard work and a talent for his country’s myriad dishes have helped Acurio create a franchise comprising of 44 restaurants worldwide.

After studying at Le Cordon Bleu in Paris, Acurio returned to Peru and in 1994 he opened his first restaurant, Astrid y Gastón, with his wife (and winner of the 2015 S.Pelligrino Latin America Best Pastry Chef Award), Astrid Gutsche.

Another husband-and-wife team, Virgilio and Pía Martinez are the force behind Central where, according to their culinary philosophy, every dish is a homage to Pacha Mama (Mother Earth). Ranked fourth in the S.Pelligrino World’s 50 Best Restaurants list in 2015, Central has redefined classic Peruvian dishes with creations such as hot ceviche of langoustines and corvina fish, and pseudocereals with quinoa and kañiwa (a quinoa-type grain).

Experience Lima with our private tailor-made trip: The Andes to the Amazon. Peru Explored

Established in 2004, this understated restaurant located in the San Isidro business district is known for its emphasis on exotic, but sustainable ingredients. Chef Pedro Miguel Schiaffino works with farming cooperatives in the Peruvian Amazon and elsewhere in Peru to ensure a steady supply of such wonderful-sounding ingredients as giant pajuro beans and Amazon river snails.

Peru’s chifas (Chinese restaurants) are well known, but its Japanese heritage is equally influential on the culinary scene. Maido in Miraflores is considered to be the best of its kind, serving exquisite Nikkei (Peruvian-Japanese fusion) dishes.

Famed for his appearances as a judge on MasterChef Perú, chef Micha Tsumura has conceived such novel takes on Peruvian classics as guinea pig with yucca cream, and liquid nitrogen ceviche tiradito. The 15-course Nikkei Experience, a perfect melding of the two cuisines, covers everything from ceviche to traditional chicken stew.

Through a focus on traditional ingredients, Peru's dynamic chefs have created a cuisine that reflects the country's varied geography and cultural heritage. And as the movement for seasonal, local produce continues to grow, they are sure to find ever more inventive ways of using the gastronomic bounty their country provides.

Read more: Where to go in June, July, August

Read more: Where to go in September, October, November