Top 6 cities to explore in Mexico

Fabulous museums, exquisite restaurants, imposing plazas and charming neighbourhoods are just some of the attractions to be found in Mexico’s immensely varied urban destinations. From colonial settlements to cool hotspots, here is our guide to the top cities to explore in Mexico. 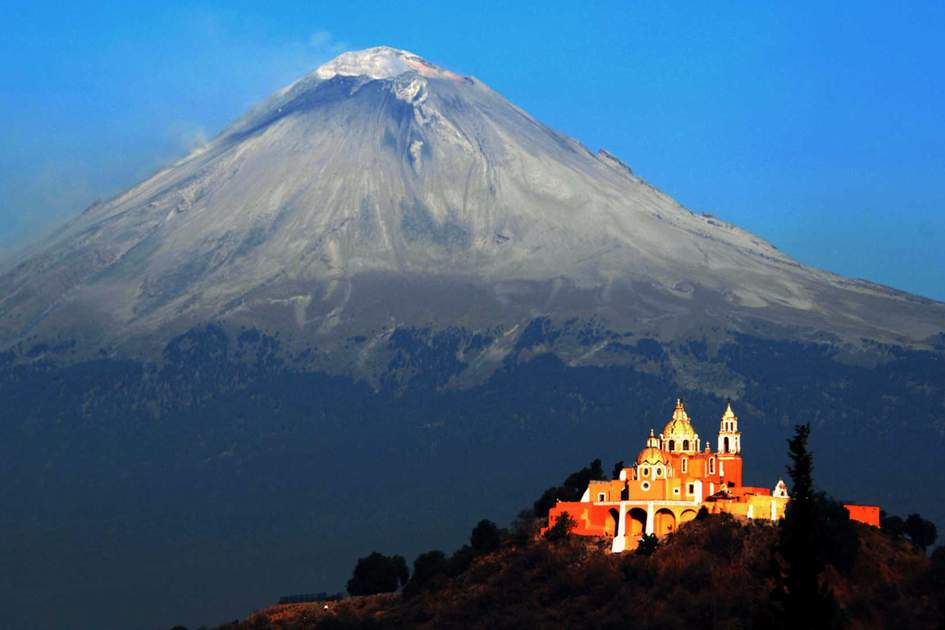 The core of Mexico’s giant capital and its surrounding region is teeming, sometimes overwhelming, but always fascinating. The city has everything, from bustling markets to all-night clubs and ultra-chic hotels. Experience this for yourself on Insight Guides' Mexico City to the Yucatán holiday, which includes historical guides tours and visits to ancient ruins.

Most of Mexico City’s major sights are in a central area that stretches west from the Zócalo (main square) to Chapultepec Park, the location of the anthropology museum. North and south of the park are the fashionable districts of Polanco, Roma, and Condesa, with many of the best restaurants and most stylish nightlife. Farther south are the charming old colonias (neighbourhoods) of San Angel and Coyoacán, with their Bohemian feel and memories of Diego Rivera and Frida Kahlo, and the floating gardens of Xochimilco.

Mexico City makes a base for all kinds of day and weekend excursions: to pre-Hispanic ruins at Teotihuacán and Tula, colonial towns, and Baroque churches in sleepy villages; or to shop for silver in Taxco, relax at spa resorts in the lush hills of Morelos or sail on a mountain lake at Valle de Bravo.

Puebla, culturally one of the richest of Mexico’s colonial cities, known both for the uniquely colourful style of its historic buildings, many clad in Talavera tiles, and the special qualities of its cuisine. In spite of being a growing industrial centre, with an enormous Volkswagen auto plant, Puebla has preserved a good deal of its old character, and possesses some of the most impressive colonial art and architecture in Mexico. Don't believe us? Explore the city's rich culture on Insight Guides' Magnificent Mexico and Mayan Treasure trip.

One such gem is the elegant cathedral, the second largest in the country. Overlooking, naturally, the main square, it was consecrated in 1649, and combines the refined architecture of the Spanish Renaissance with more ornate Baroque styles. The exterior is severe and somber, while inside the main altar, another work by Manuel Tolsá, is like a miniature Roman temple. The angel statues around the atrium are symbols of the town, the original name of which was 'Puebla de los Angeles'. 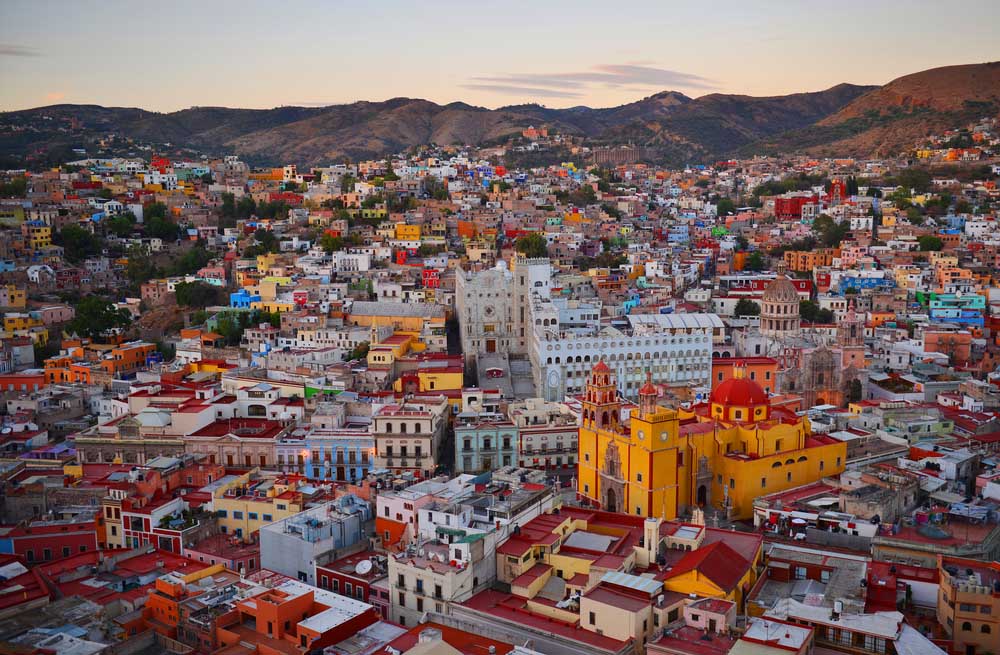 Cuernavaca, capital of Morelos state, is also a weekend resort where capitalinos go for clean air, a pleasant climate and relaxation. It has always attracted the capital’s elite: Aztec emperors built temples here, and Cortés a palace; artists, retired North Americans, and even the fugitive Shah of Iran have also chosen to settle in this flower-filled “city of eternal spring”. In the 1930s, writer Malcolm Lowry (using its Náhuatl name, Quauhnahuac) made it one of Mexico’s mythical cities in his novel Under the Volcano, as the place where his British Consul drinks himself to death. More recently – in contrast – exhilarating landscapes, the fine climate, and fast-flowing rivers have made Cuernavaca and Morelos one of Mexico’s most popular areas for adventure and health tourism. The city itself has grown rapidly, but a weekend here still comes as a welcome escape from the cacophony of the metropolis.

In the centre of town, the Plaza de Armas is flanked by the Palacio de Cortés, which the conqueror had built on the ruins of a pre-Hispanic temple. It now houses the Museo Cuauhnáhuac, a substantial collection of pre-Hispanic and colonial artefacts from the surrounding area. There is also a series of murals by Diego Rivera depicting 400 years of Mexican history, from the Conquest to the Revolution.

The city of Guanajuato, which in the local tongue translates to “Hill of Frogs,” is the capital of the state and one of Mexico’s most famous tourist spots. In colonial days it was the centre of a rich mining area and one of the greatest producers of silver in the world.

A Unesco World Heritage site, Guanajuato is charming, romantic, and sometimes eerie. This well-preserved city is built in a ravine and on the banks of a river; no street runs in a straight line; all go their crooked ways, up and down steep hills, some falling into an abyss; in some houses the entrance is through the roof. Tunnels and streets wind their way along the basements of the town’s old buildings, with steps intermittently leading to a square or winding alley. Buildings new and old are brightly coloured and give the vistas a fiesta-like feel even when nothing in particular is going on. 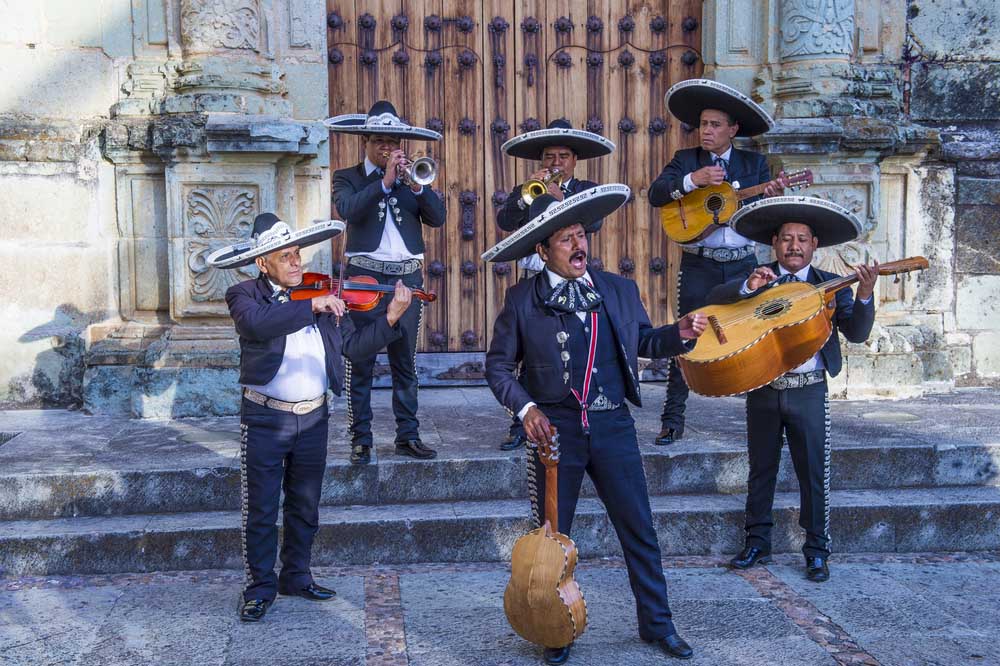 Mariachis perform on the street in Oaxaca, Mexico. Photo: Shutterstock

The Spanish city of Villa de Antequera de Guaxaca, now known simply as Oaxaca (pronounced wa-ha-ca), was founded in 1529 near an indigenous settlement called Huaxyacac, which means “Place of Gourds”. At an altitude of about 1,500 meters (4,920ft), its mountain climate is splendid – never too hot and never too cold. Oaxaca’s centre received Unesco World Heritage status in 1987 and still retains much of its old world charm, and ecotourism trips to remote ruins are growing in popularity.

The city has a population of a little more than 500,000 inhabitants and an unexpectedly cosmopolitan atmosphere. The indigenous influence is stronger here than in any other state capital, the Spanish colonial architecture is superb and well preserved, and there are some fine museums and a thriving artistic community.

Stop by the city for two nights and soak up the unique cultures on Insight Guides' Magnificent Mexico and Mayan Treasure trip.

Maya and Spanish traditions are inextricably intertwined in the fascinating capital of the Chiapas highlands, together with a touch of modern style.

At an altitude of 2,100 meters (6,890ft), San Cristóbal de las Casas, capital of Los Altos, is many visitors’ favourite town in Mexico. It is a city of immense colonial charm, with mostly one-story houses with red-tiled roofs and walls in blue, green, and ochre around secluded patios, and the scent of wood smoke lingering in the air. The cool mountain air is sparkling, and plenty of likeable restaurants, surprisingly trendy cafés, and attractive hotels make this a very relaxing place just to spend some time and soak up the atmosphere.

Insight Guides can help you with planning, organising and booking your trip to Mexico. Simply, get in touch and share your budget, interests and travel style. Our local experts will create an itinerary exclusive to you and your requirements, which you can amend until it's just right. Alternatively, browse and modify ready-made holidays to create your dream trip today.

We got everything that we wanted and more. An amazing service. We couldn't be happier!