What you need to know: Sri Lanka's Temple of the Tooth

The Temple of the Tooth is the most important pilgrimage place in Sri Lanka, and home to the revered Tooth Relic of the Buddha, believed by many Buddhists to be the most precious thing in the world. Here's what you need to know before making your visit 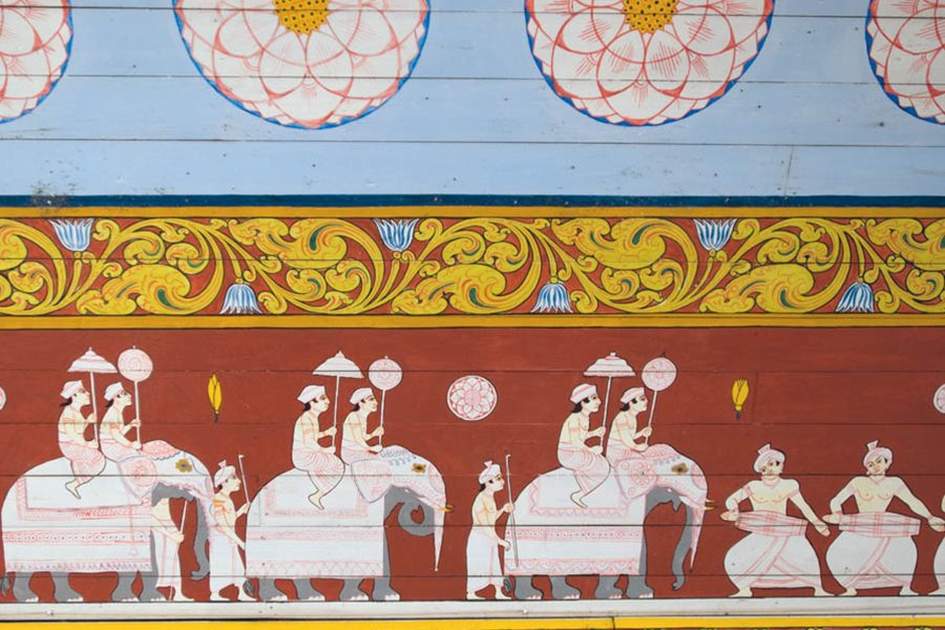 Dalada Maligawa frescoes within the Temple of the Tooth, Kandy Sri lanka
PrevNext

Set in a beautiful location amid Sri Lanka's precipitous central hills, the island's cultural capital is a city called Kandy, home to a vibrant traditional arts scene as well as what many Buddhists believe the most precious thing in the world – the Tooth Relic of the Buddha

It is believed to confer kingship on whoever possesses it and is kept inside seven caskets placed inside one another, like Russian dolls. The outer casket, about 1.2 metres (5ft) in height, is of silver gilt, but all the others are of beaten gold. Perhaps not surprisingly, given its incalculable value, it is hardly ever put on public display.

This relic now resides in Kandy's Temple of the Tooth. On attaining nirvana, the Buddha was cremated, but mourners managed to rescue parts of his mortal remains from the fire, including a tooth. This precious relic was kept in India for the following eight centuries, until its existence was threatened by a resurgence of militant Hinduism. It is said that the Tooth fell into Hindu hands, but attempts to destroy it with a sledgehammer succeeded only in breaking the hammer. The Hindus gave it back.

Fearing for its future, King Guhasiva of Kalinga, in present-day Orissa, hid the relic in the hair of his daughter, Hemamala, who was then spirited away to Sri Lanka. Arriving in Anuradhapura, the Tooth was installed in a specially built temple, while a lavish procession (the antecedent of today’s spectacular Kandy Esala Perahera) was initiated, with the Tooth paraded through the streets of the ancient capital on the back of an elephant.

The Tooth remained in Anuradhapura for the next five centuries, until being taken to Polonnaruwa, and thence to Dambadeniya and Yapahuwa. In 1284 an invading Pandyan army captured the Tooth and took it back to India, where it stayed for four years until it was recovered by Parakramabahu III. Henceforth, a special bodyguard was assigned to watch over it.

Explore both the Temple of the Tooth and Polonnaruwa with a local guide on Insight Guides' Perfectly Sri Lanka adventure.

The right to rule Sri Lanka

Increasingly, it was believed that whoever possessed the Tooth had the right to rule Sri Lanka, transforming it into an object of enormous political, as well as spiritual, significance. Following its recovery from the Pandyans, a succession of Sinhalese kings carried it around with them as they established transient capitals in various parts of the island; first at Kurunegala, then Gampola, and then Kotte.

In the 16th century, the Portuguese captured the Tooth and shipped it to Goa where, before the assembled eyes of the Portuguese viceroy, a bishop and numerous dignitaries, it was pounded to dust, the dust burnt, and the ashes thrown into the sea. That should have put paid to the Tooth, but not so, apparently. The remnants reassembled themselves on the sea bed, enabling the Tooth to fly back to the island of its own accord. It finally arrived in Kandy in 1592, and has remained there ever since.

The British, who briefly gained possession of the Tooth after the fall of Kandy in 1815, inspected the relic and decided that the discoloured object was definitely a tooth, but that at 5cm (2 inches) in length it was more likely to have come from a crocodile than a human being. They overlooked the fact that the footprint on Adam’s Peak, a strange impression on the bare rock at the summit which some believe to be the Buddha’s footprint  is 1 metre (3ft) long.

Ready to take your trip to Sri Lanka?

Read more: The 10 best things to do on your holiday in Sri Lanka

Which is the best month to visit? Our guide to when to go to Sri Lanka

What to do on your trip to Sri Lanka: 11 essential experiences

Learn more: How to get off the beaten path in Sri Lanka

Overall: I wanted to thank you for handling the organisation of our ground transportation and tour-guide services during our recent holiday in Sri Lanka. As quite experienced independent travelers we were initially a little wary of having a dedicated... Read more