Justifiably well-known for the expansive, awe-inspiring temple complexes at Angkor, in the northwest of the country, the southeast Asian nation of Cambodia also offers a host of other magnificent monuments. Here is our guide to temples in Cambodia. 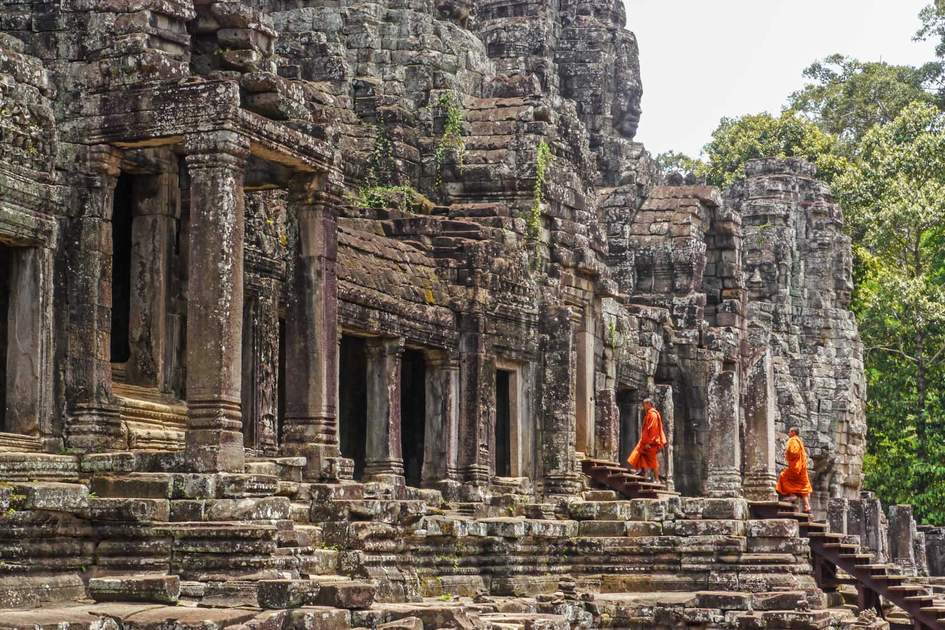 For many travellers to the country, the primary reason for their visit to Cambodia is to see the world-famous temples of Angkor. The stupendous array of ancient religious monuments making up what was the capital of the Khmer empire at its zenith during the 12th century are undoubtedly unforgettable, but by venturing further afield you can also experience a wealth of other majestic Cambodian temples.

Angkor Wat is the highlight of a visit to the Angkor region – the great temple is unsurpassed by any other and the sheer scale of the complex is staggering. Construction of this monumental masterpiece, originally established as a Hindu temple dedicated to the god Shiva, is thought to have begun in the 12th century. Of the vast quantities of stone used in creating it, the majority of its exposed surfaces are elaborately carved to an incredibly high standard.

Walking to the central shrine across the 200 metre-wide moat and along the main causeway is a humbling experience. At the end, the temple’s main towers rise up an astonishing 65 metres through three separate levels. At the third level there are five great towers – one at each corner, and the great central spire – all of which are conical, tapering to a lotus-shaped point. The temple houses a variety of galleries featuring carved statues and bas-reliefs depicting historic battles, hindu gods and scenes of heaven and hell. The central sanctuary at the third level of Angkor Wat affords superb views across the full temple site allowing visitors the opportunity to fully grasp the stupendous scale of the entire complex – a truly unforgettable experience. 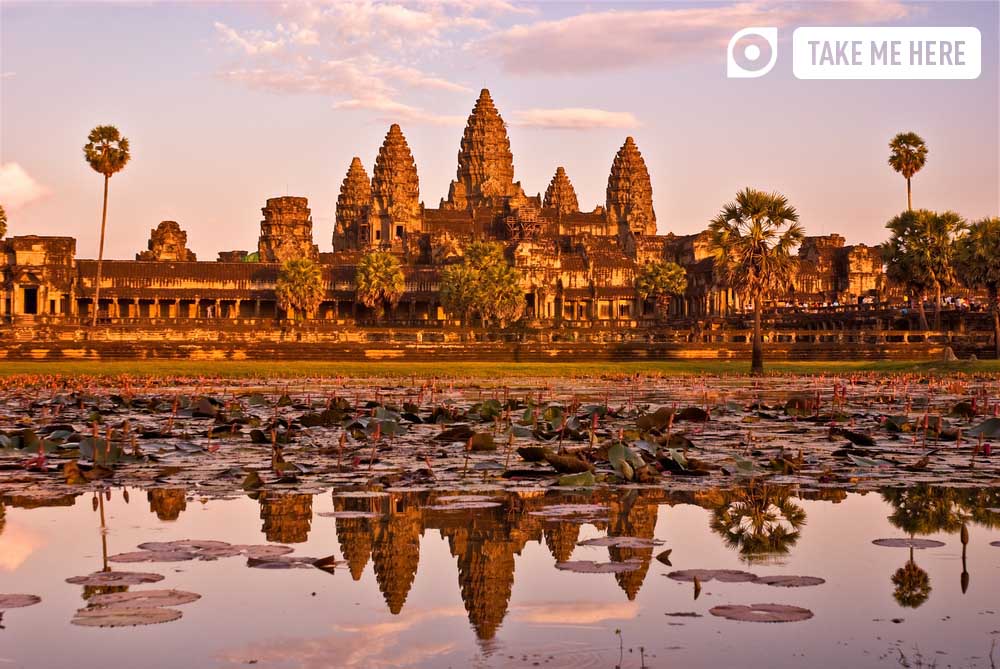 Angkor Thom encompasses an expansive square area of land enclosed within an 8-metre-high defensive wall and outer moats around 100 metres wide. At its centre stands the Bayon, which is probably the most celebrated Cambodian temple after Angkor Wat itself.

Thought to represent a symbolic temple mountain, the Bayon rises on three levels, the first of which houses galleries featuring some of Angkor’s most remarkable bas-reliefs depicting historical scenes of some of the Khmers’ battles as well as domestic and everyday scenes. On the third level you can examine the vast, enigmatic faces and sublime smiles of the bodhisattva Avalokitesvara, which are carved onto dozens of eroded stone towers. 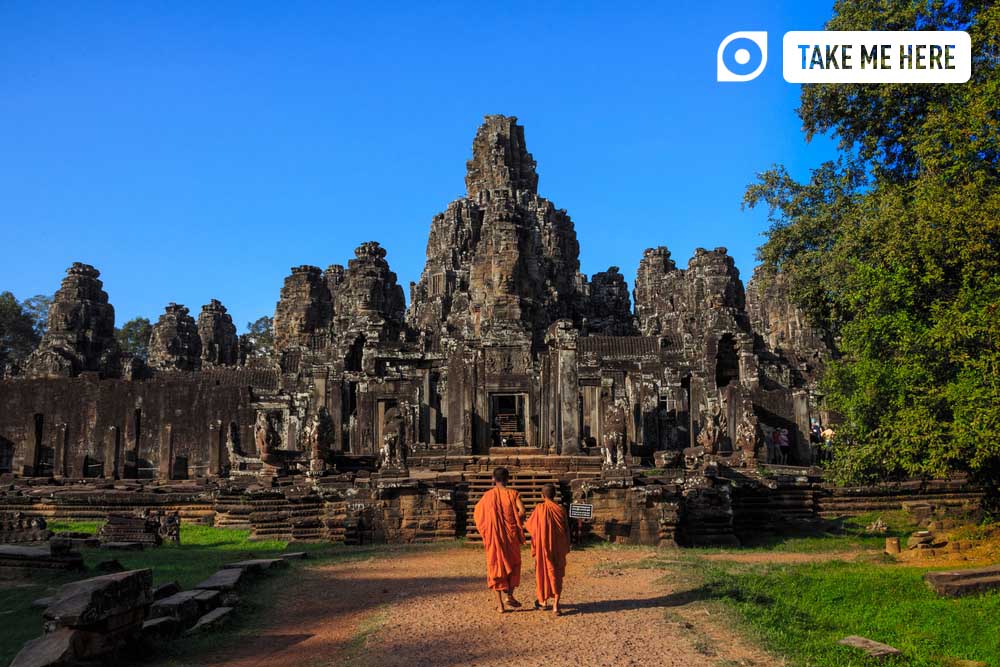 Another of Angkor's profoundly impressive monuments, the majestic Pre Rup, dating from the 10th century, is the quintessential ancient Khmer temple-mountain. Stairways guarded by lions lead up on all four sides of the magnificent pyramid which is crowned by five towers rising above the surrounding forest canopy. Less visited than other nearby sites, you can enjoy relative peace and quiet as you explore the temple’s intricately carved reliefs of male and female Hindu divinities and numerous shrines. The temple’s upper levels are popular spots for watching the sunset over the jungle.

A 2-hour drive east of Angkor, lie the expansive, overgrown ruins of Beng Mealea, which was built from sandstone in a style reminiscent to that of Angkor Wat, following a similar layout. Covering one square kilometre and with a 45 metre-wide moat, the site was clearly of some consequence. The largely unrestored temple gives visitors a good idea of what French archaeologists must have found when they originally arrived at Angkor. Vast piles of mossy masonry lie tumbled amongst huge trees and glimpses of intricate carvings peep out from the jungle-enveloped ruins. Attracting fewer visitors than the Angkor temples, you can savour Beng Mealea's lost-in-the-jungle atmosphere and discover fine traces of carvings on lintels, walls and pediments as you explore. 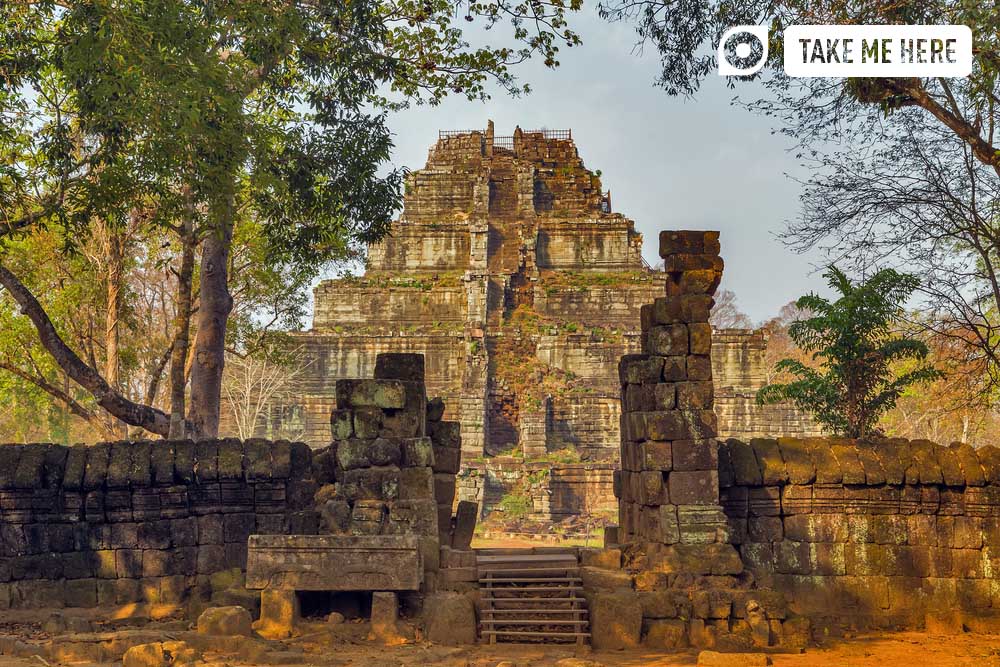 An hour’s drive further northeast from Beng Mealea takes you to one of the more remote temple sites in Cambodia at Koh Ker. More than 40 major monuments, most of which have been largely engulfed by jungle, are spread across a wide area. The most memorable of those that are open to the public is the Prang, a 35 metre-high, seven-tiered sandstone ziggurat which brings to mind the great Mayan pyramids of Central America. Climb the 160 stone steps leading to the summit to take in breathtaking panoramic views of the surrounding tropical forest and mountains on the horizon. 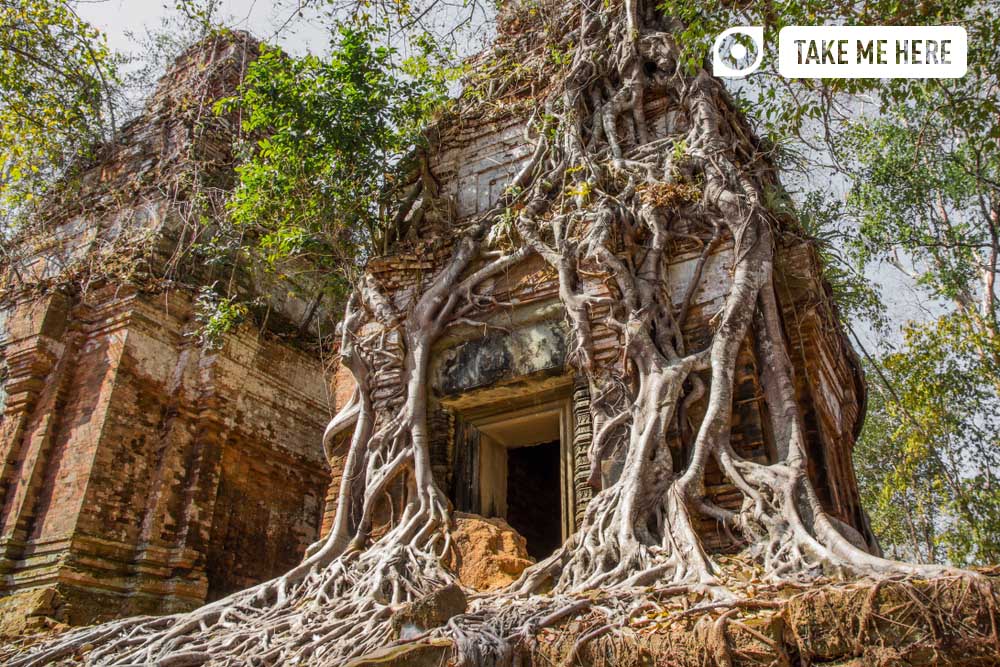 Close to the border with Thailand, the impressive temple of Preah Vihear, dedicated to Shiva, sits high up on an escarpment overlooking the plains of Cambodia. The sandstone temple’s four enclosures are laid out in a row, and the well-preserved gopuras of each are adorned with numerous intricate carvings of Hindu deities. Each successive enclosure takes you up higher, until you reach the summit, from where there are sweeping views of the craggy Dangkrek mountain range in the distance.

One of Cambodia's most memorable destinations, Banteay Chhmar lies in the northwest of the country, a 3-hour drive from Siem Reap. The temple complex covers an area of around 3 square kilometres, with nine smaller temples surrounding the citadel. Though large sections have collapsed into large piles of masonry, parts of the temple have survived intact making it possible to appreciate examples of the magnificent carvings for which it is best known. There are a number of towers adorned with the four faces of the bodhisattva Avalokitesvara, as well as complete galleries and shrines featuring statues of the Buddha and impressive bas-reliefs of Hindu gods and scenes from the ancient Hindu epic the Ramayana. 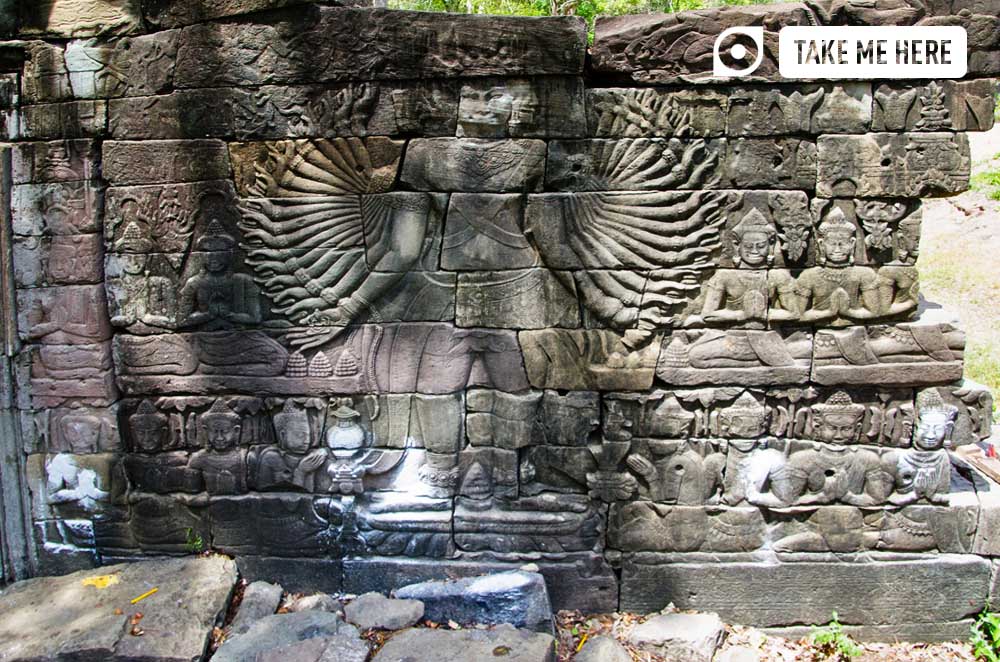 Ready to discover temples in Cambodia?

Our local experts can help plan wonderful trips for you in Cambodia. Simply get in touch, letting us know when you would like to travel and your ideas for the trip. We will then create a personalised itinerary for you, which you can amend until you're fully satisfied with every detail before booking. Browse our existing existing itineraries for inspiration, and keep in mind that all of our planned itineraries can be tailored to meet your specific needs.

Sophea was excellent from the point of getting in contact with them to the end of our 1 day tour of the lost city. A very polished service and our guide was very passionate and well informed in the history of Cambodia. I would definitely use this service again and recommend them to anyone in a heart beat.