What you need to know: Thai cuisine

Explore the surprising diversity of Thai cuisine, how to eat it, local specialties, the frightening prospect of eating insects and the more reassuring prospect of tasty desserts... 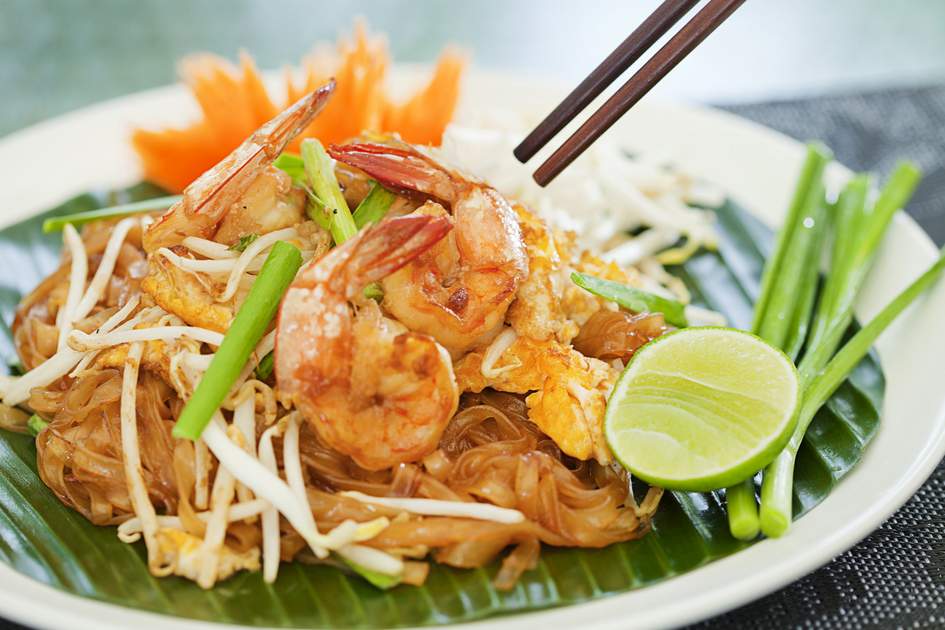 Thai food is expanding faster globally than any other cuisine, and it’s easy to see why. Less a dining experience than a sensory overload on different levels, it’s one of the few cuisines in the world capable of drawing people to a country purely on its own merit...

Thai cooking is not just about tongue-numbing and tear-inducing spices. Regional, ethnic-migrant and fusion styles of cooking combine to create a variety of exciting and complex flavours that appeal even to the serious gourmand.

It may be the explosive spiciness of Thai food that initially overwhelms, but what’s most impressive is the extraordinary complex balance of flavours that lie underneath. And contrary to what most people think, Thai cuisine is not all blatantly spicy; most Thai meals will include a sampling of less aggressive dishes, some subtly flavoured with only garlic and mild herbs.

The variety of foods and cooking styles is immense, as each of Thailand’s four regions have given rise to distinct cuisine variations. The northeast is influenced by Laos, the south by Malaysia and Indonesia, the central area by the cuisine of the Royal Thai kitchens (the one foreigners are probably most familiar with) and the north by Myanmar and Yunnan (in China).

Tourist centres such as Bangkok, Chiang Mai, Pattaya, Phuket and Ko Samui have restaurants as diverse as Brazilian, French, Japanese and Italian (the country’s favourite western food). Adding excitement, especially in Bangkok, are restaurants experimenting boldly with Asian and Western ingredients and methods of preparation.

Experience this for yourself on Insight Guides' Bangkok Gourmet holiday: where you'll have a private cooking class in a traditional Thai kitchen, rustling up local specialities and national dishes.

How to eat Thai food

Most Thai meals have dishes placed in the middle of the table to be shared by all; the larger the group, the more dishes you get to try.

Rice is the staple; in the past it sustained workers throughout the day with just small portions of chilli, curry or sauce added for flavour. Even now, many rural Thais eat large helpings of rice with just small morsels of dried or salted fish. Jasmine-scented Thai rice is one of the most delicious varieties found in Asia.

The small but very fiery Thai chillies (prik) come in red or green forms, but both pack a potent punch. When sliced and served in fish sauce (nam pla) as a condiment, it’s called prik nam pla. 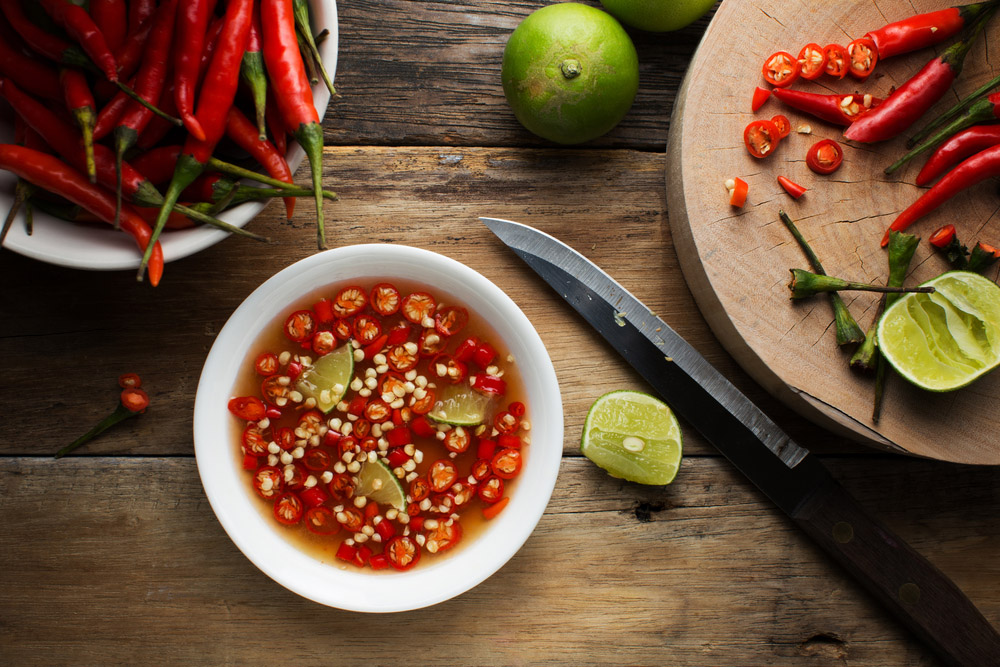 A lack of rural transport infrastructure until the late 20th century and geographical obstacles, such as the mountains in the north, have resulted in significant local variations within the four regions of Thailand, often forged by ingredients available locally or the cultural character of village communities. Some towns are celebrated for “the best” version of a particular dish or product.

Phetchaburi, a coastal city south of Bangkok, is reputed to have the best palm sugar in Thailand. Consequently, it is famous for desserts, notably a legendary yellow bean pudding called khanom mor keng. Phetchaburi’s central market also has stalls selling khao chae, which is rice in chilled water flavoured with fragrant herbs. The dish originated from the Mon, who populated areas mainly in the west of Thailand, from around the 6th century AD. Traditional Mon dishes are still found in stalls around Kanchanaburi, and in Bangkok, on the island of Ko Kret.

Close to the borders with Myanmar, near the towns of Sangklaburi, Mae Sot and Mae Hong Son, tea-leaf salads are common, along with a snack called miang, consisting of chopped ingredients like grated coconut, dried shrimp and chilli wrapped in tea leaves. By talking to locals while travelling, you will find some less well-known culinary gems.

Kaeng is usually loosely translated as curry, but it covers a broad range, from thin soups to near-dry dishes such as the northern kaeng ho. Many kaeng are made with coconut cream, like kaeng ped (red curry), kaeng khio waan (green curry) and kaeng massaman, a rich, spicy-sweet dish of Persian origin with meat, potatoes and onions. Kaeng without coconut milk include what are known as “jungle curries”, which are very spicy.

Fish and seafood often feature in Thai cooking. Trang is famous for its soft-shell crab, and if you’re visiting Satun, be sure to try the speciality black fried squid (cooked in its own ink). Other dishes to try are hoi malaeng poo op maw din (mussels in their shells, steamed in a clay pot with lime juice and herbs) and poo pat pong karee (steamed chunks of crab in an egg-thickened curry with crunchy spring onions). Mud crabs caught fresh on the Gulf coast beyond Chonburi are said to be the best in Thailand.

Add a stop at any of the destinations above to experience the local take on Thai cooking on a trip with Insight Guides: browse suggested itineraries online now. 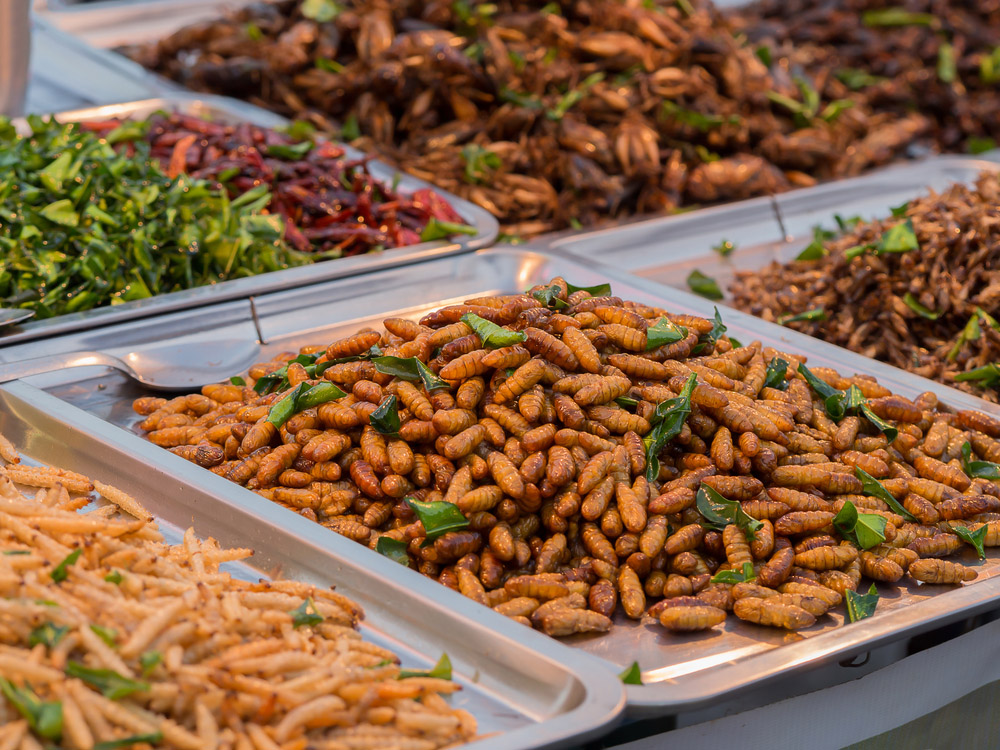 Would you try these fried insects while in Thailand? Photo: Shutterstock

Farmers in Thailand’s northeast region make extra income by catching insects to sell to local food stalls. They may look gruesome and even revolting to the uninitiated, but these spiky and multi-legged creatures are rich in nutrients. The takkatan (grasshopper) has the flavour of deep-fried crispy pork skin, the mawn mai (silkworm) is somewhat nutty, and if you fancy a maeng da (water beetle), the females displaying bright orange eggs are said to be the tastiest. Be sure to rip off the legs and shell first: they slide down your throat more easily. Insect cuisine is now also found in tourist areas, and insects are even canned for export, mainly to Japan.

Explore floating markets with a local expert on Insight Guides' Bangkok Culture holiday: they'll help you find the creepy-crawlies and alternative snacks... If you want to try them for yourself!

Khanom (desserts) come in a bewildering variety, from feathery light concoctions with crushed ice and syrup, to custards, ice creams and an entire category of cakes based on egg yolks cooked in flower-scented syrups. After-meal desserts, served in small bowls, are generally light and elegant. Kluay buat chee has banana slices in sweetened and salted warm coconut cream. Kluay kaek uses bananas sliced lengthwise, dipped in coconut cream and rice flour, and deep-fried until crisp. Another favourite is taap tim krawp (water chestnut pieces covered in red-dyed tapioca flour and served in coconut cream and crushed ice), and sangkhaya ma-praoawn, a coconut cream custard steamed in a coconut or a small pumpkin.

Many desserts are inventive – you may finish a rich pudding before realising that its tantalising flavour comes from crisp fried onions. Look out for vendors who sell khanom beuang, crispy shells filled with strands of egg yolk cooked in syrup with shredded coconut, sweet and spicy dried shrimp, coriander and coconut cream.

If you sample nothing else in Thailand, don’t miss the heavenly khao niao ma-muang (sweet mango with sticky rice and coconut cream). 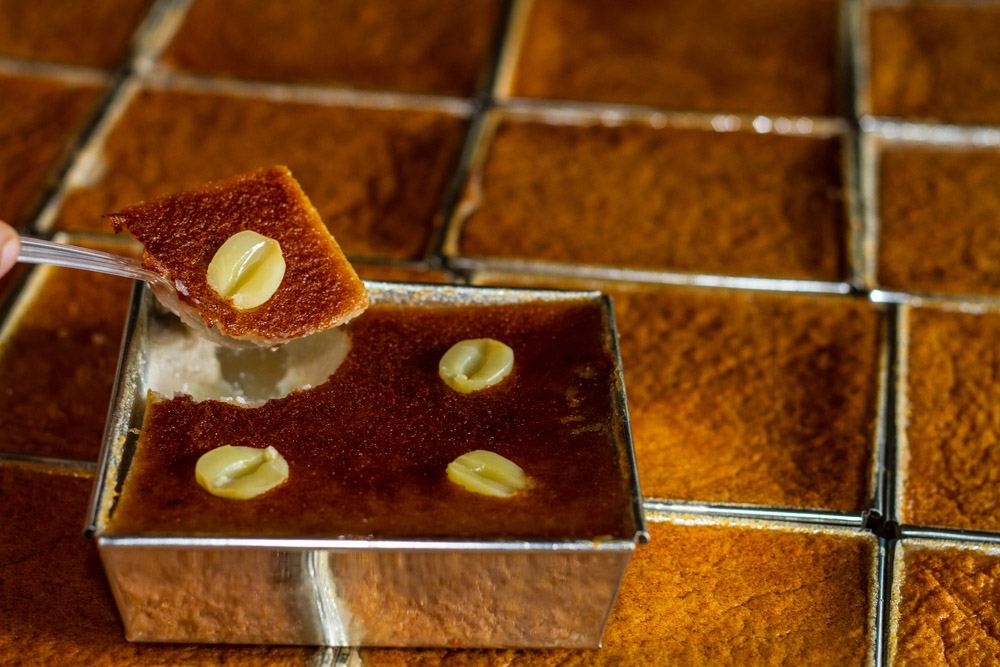 Ready to take your trip to Thailand with Insight Guides?

A pool with a view: where to find Thailand's best infinity pools

Phuket's vegetarian festival: what you need to know

A local's guide to Chiang Mai: escape the crowds and see the secret side of the city