Touring temples is an unforgettable part of any trip to Thailand. Its ancient cities are home to evocative, crumbling ruins, while new and unusual structures are being built all the time to challenge and redefine Thai tradition. Here are some of Thailand’s most unforgettable temples. 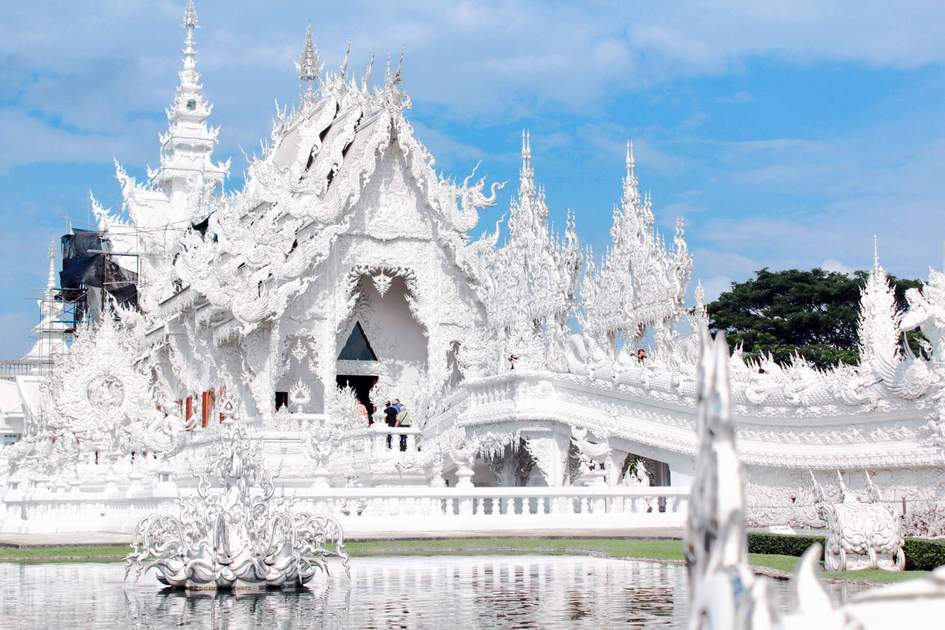 Thailand’s most famous temple is also its most sacred, as the home of the Emerald Buddha: a centuries-old statue, cut from semi-precious green stone, which is considered to be the great protective symbol of Thailand. The temple itself is most notable for its huge golden chedis (bell-shaped structures) housing relics of religious and royal figures and a rarefied location on the grounds of the royal palace. Wat Phra Kaew was built in 1782, but it’s so beautifully maintained that it could quite easily be brand new.

Another of Bangkok’s most iconic temples is Wat Pho, the capital’s oldest and largest temple. A temple has stood here since the 16th century, but the current structure was built in the 1780s and has been grandly expanded and embellished in the centuries since. Wat Pho is perhaps most famous as the home of Thailand’s most recognisable reclining Buddha statue, a 46 metre-long gilded statue, covered in gold leaf, of the Buddha lying back with his head resting on his hand. This posture represents the moment of death, with the Buddha about to enter nirvana. Wat Pho is also the home of traditional Thai massage, and lessons are still available here. 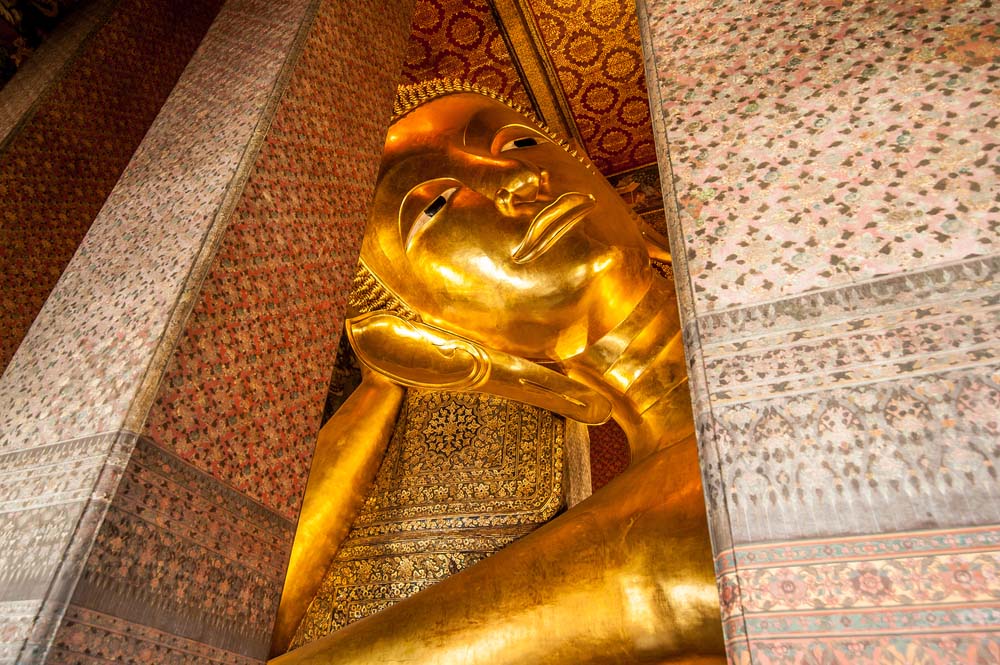 Ayutthaya was the seat of a powerful Siamese kingdom between the 14th and 18th centuries. The city was violently destroyed by the Burmese in 1767, but today its ruined temples are incredibly atmospheric. Wat Phra Si Sanphet was considered the holiest, and it remains the most impressive, with its three stone chedis remarkably intact. At nearby Wat Phra Mahathat is Ayutthaya’s most eerily beautiful sight: the head of a Buddha statue emerging from (or disappearing into) the strangling roots of a fig tree.

Not all of Thailand’s most beautiful temples are ancient or semi-ruined. Some are brand new, and one of the most remarkable of all is still being built. Wat Rong Khun, outside the northern town of Chiang Rai, is part temple, part art exhibit, the brainchild of artist Chalermchai Kositpipat. Gleaming white and studded with chips of mirrored glass, the temple is ornately decorated with striking scenes from Buddhist mythology; to enter, you have to cross a bridge over a sea of outstretched hands, symbolising doomed souls in hell. By way of contrast, murals inside depict pop culture icons such as Michael Jackson and Neo from The Matrix. The temple remains a work-in-progress, but when it’s finished (currently projected to be in 2070), it will include a prayer room, meditation hall and monastery. 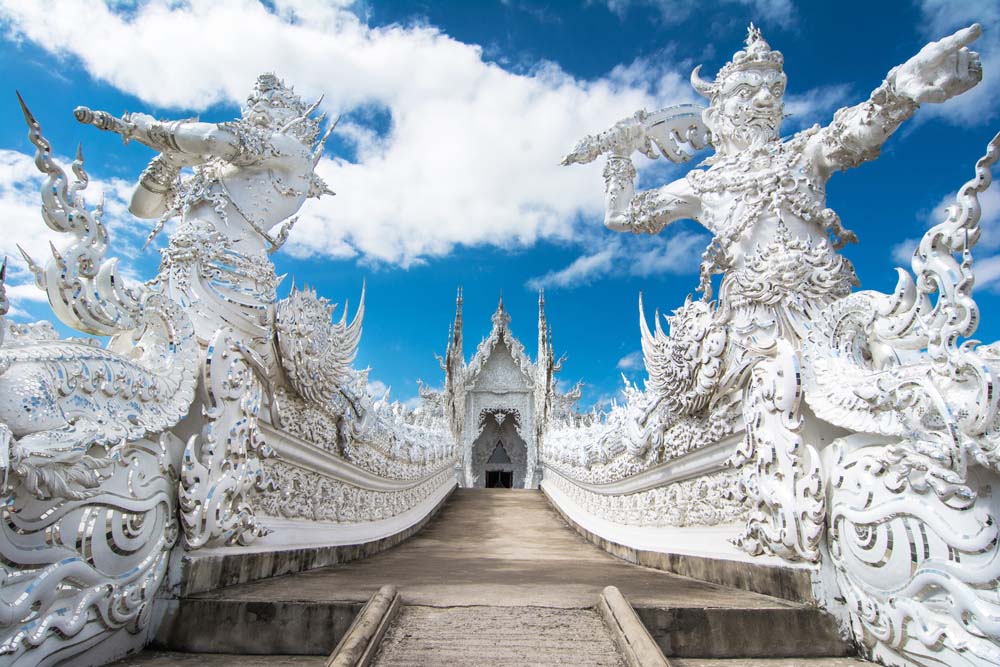 Thai temples, you’ll notice, love a Buddha statue – but there are none bigger than the aptly named Great Buddha at Ang Thong’s Wat Muang. Standing at a whopping 92 metres tall, this is not only the biggest Buddha in Thailand, but the seventh-tallest statue of any kind in the world. Interestingly, eight of the current top ten depict Buddhist figures – either the Buddha himself or Guanyin, the bodhisattva of compassion. Wat Muang’s Great Buddha is constructed of concrete painted in shimmering gold and took 18 years to build.

There are so many candidates for the title of Thailand’s most beautiful temple, but Bangkok’s Wat Arun has to be in the running. It is named for Aruna, the Hindu god of the dawn, and it is gorgeous at both sunrise and sunset; its surface is covered in incredibly ornate coloured porcelain, which glitters to stunning effect in the twilight. The decoration depicts scenes from Indian mythology, and the structure of the temple, radiating outwards from its central multi-tiered tower, represents the mythical Mount Meru, centre of the Hindu and Buddhist universes. Wat Arun is so iconic that its image appears on Thailand’s 10-baht coin. 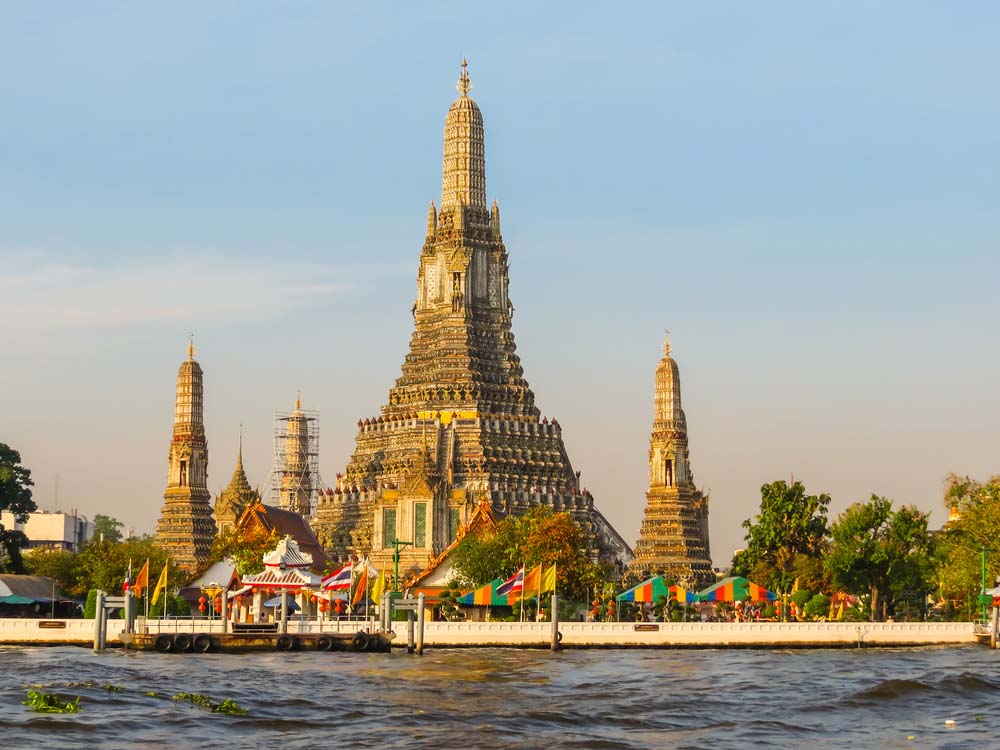 Like Wat Rong Khun, this stunning place is evidence that Thai temples are not necessarily bound by restrictive rules. Amazingly, its name is an understatement rather than an exaggeration: the glittering green pagoda was built by monks from more than 1.5 million recycled beer bottles. More and more buildings are being built on the site in the same way, including a crematorium, monastery buildings, and prayer rooms. It is considered one of the world’s great examples of sustainable architecture.

Perched on a mountainside overlooking Chiang Mai, this stunning temple is one of northern Thailand’s most beautiful. There’s a cable car to take visitors up the mountain to the temple, but if you’re up to it, take the stairs – lined with nagas (snake deities), this 304-step staircase is the longest of its kind in Thailand, and makes for a dramatic entrance. Inside the temple are beautiful gilded Buddha images, as well as statues of Hindu deities, such as the elephant-headed god, Ganesh. 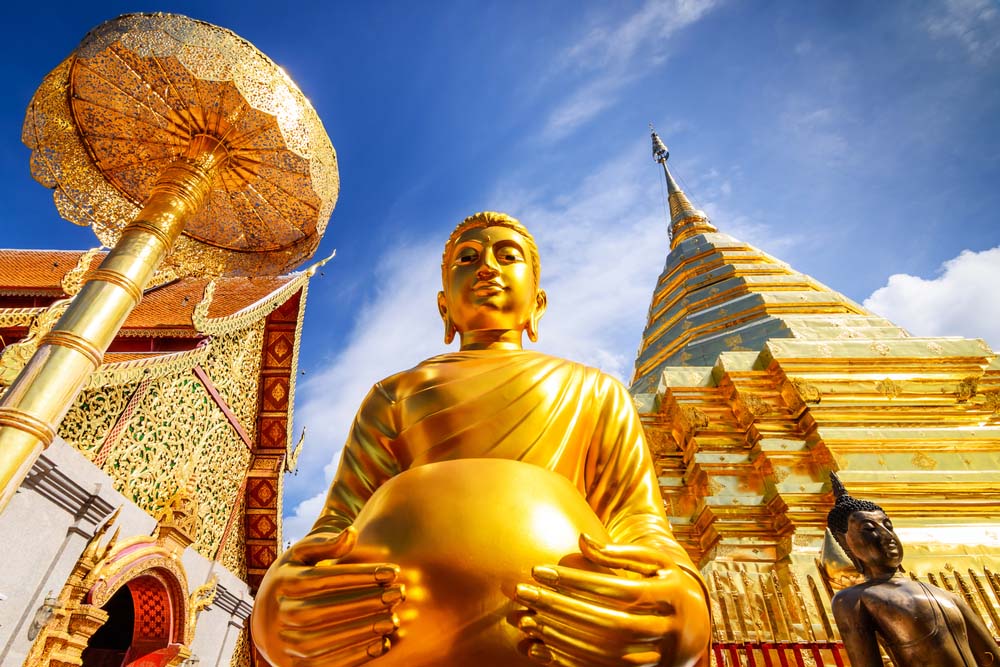 Chiang Mai, Thailand’s second city, is absolutely tiny compared to Bangkok but is its equal in the temple department – it’s not for no reason that it’s known as the 'City of Splendid Wats'. Perhaps the most splendid of them all is Wat Phra Singh, built in 1345 to house the ashes of King Kham Fu. The temple is also home to the Phra Buddha Sihing, a famous Buddha statue, and wall murals depicting life in Chiang Mai in centuries past.

Translating as the Temple on a Glass Cliff, this remote place remains off the tourist trail, but it’s worth seeking out – the nearest big town is Phitsanulok, around a 90-minutes drive to the west. Completed in 2004, this monastery-temple has a stunning design, with its surfaces covered in colourful mosaics which bring to mind Gaudí’s Modernist buildings in Barcelona more than a traditional Thai temple. There’s also a striking statue depicting five Buddhas overlooking the mountains, each one smaller than the last, in a nested arrangement like a Russian matryoshka doll. 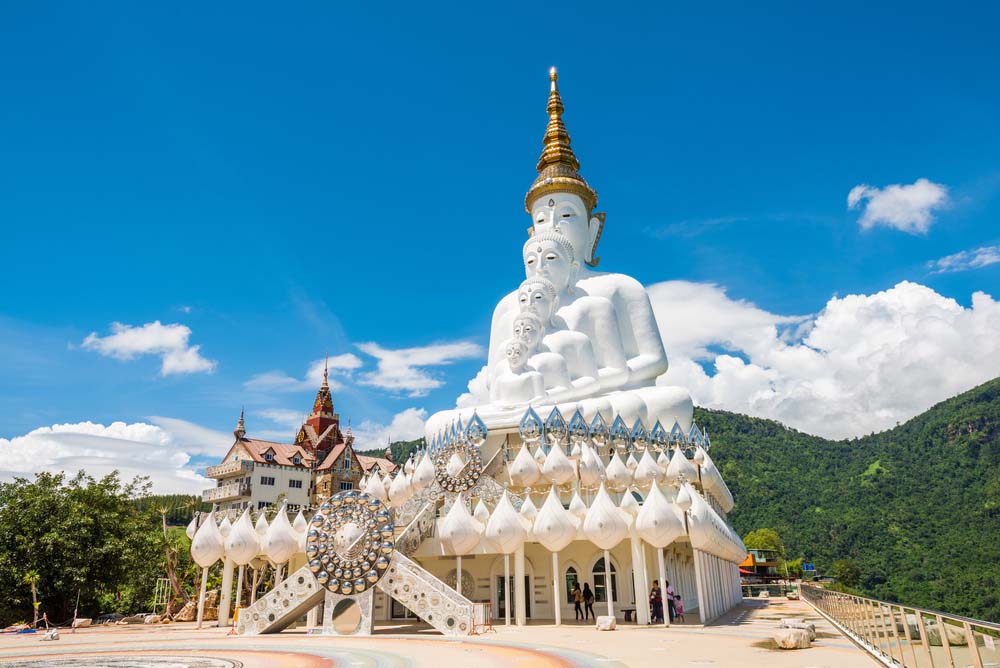 Ready to take a trip to Thailand?

Insight Guides can help you plan incredible trips to Thailand. Simply get in touch to let us know your ideas for the trip and when you would like to travel. Our local experts will then create a tailor-made itinerary especially, which you can amend until it's exactly how you want it. You can browse our pre-planned itineraries for inspiration, and keep in mind that they can all be tailored to suit your specific needs.

Our family thanks you so much for organizing such an amazing trip for my son and I, in a short couple of weeks before the holidays. The entire trip was meticulously planned, all with only a few tidbits of information in interests and needs. We had continuous contact and people checking in on our well being and satisfaction with itinerary. Each and every guide and driver along the way were friendly, gracious, knowledgable, kind, well organized and had a great sense of humor! We could not have asked for a better adventure!