A perfect day in Bologna

Bologna packs in everything you could want from an Italian city break: Medieval and Renaissance heritage, sophisticated culture and, of course, incredible gastronomy. Here's our top tips for how to spend 24 hours in the city 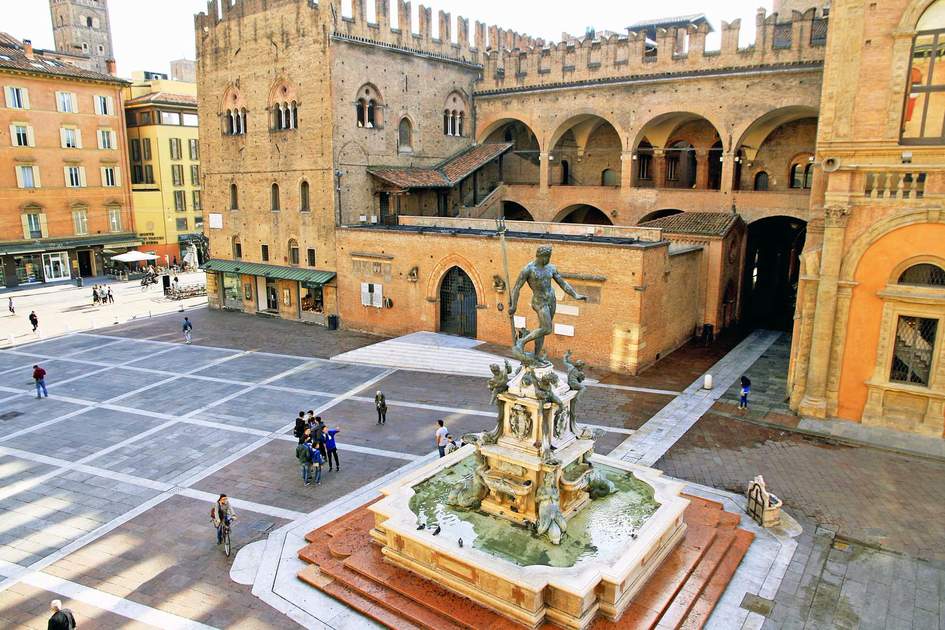 9.00am: Breakfast on Piazza Santo Stefano

Kick off the day with coffee and diet-busting brioches at the Caffè Sette Chiese on Piazza Santo Stefano. Secure a seat under the arches of the portico for fine views of Santo Stefano, the city's most hallowed spot. After breakfast wander through the delightful jumble of medieval churches, cloisters and courtyards, where gentrification has resulted in many a chic gallery and café.

10.00am: Browse galleries and shops on Strada Maggiore

From Via Santo Stefano take the Corte Isolani, a quaint medieval warren of galleries and cafés, to Strada Maggiore where porticoes and palatial homes, once home to ruling families, line the street. This area of the historic city has always been the most fashionable quarter. Browse in elegant antique shops and/or visit the delightful Museum of Music and Gothic Church of Santa Maria della Vita.

Head for Piazza del Nettuno, host to Giambologna’s celebrated statue of Neptune, and beyond to Piazza Maggiore, which is overlooked by the Basilica di San Petronio. This sweeping square is the symbolic heart of the city, a showcase for daily life, from Prada-clad beauties to protesting students and traditional sausage-makers. Take the pulse of Bologna's everyday life, then take a peek inside the monumental interior of San Petronio.

Plunge into the maze of medieval alleys off Piazza Maggiore with tantalising delis, fresh food stalls and a chic covered food hall, the Mercato di Mezzo. The ancient grid of gastronomic outlets around here is as boisterous and atmospheric as in its Medieval heyday. For lunch, grab a piadina (sandwich) crammed with Parma Ham, Mortadella and local cheeses, or head for Tamburini at Via Caprarie 1, a famous gourmet deli and café. Insight Guides' local experts can direct you to the best, most authentic food in the city. Submit a trip request today and they'll plan, organise and book your entire trip for you, including where to eat. 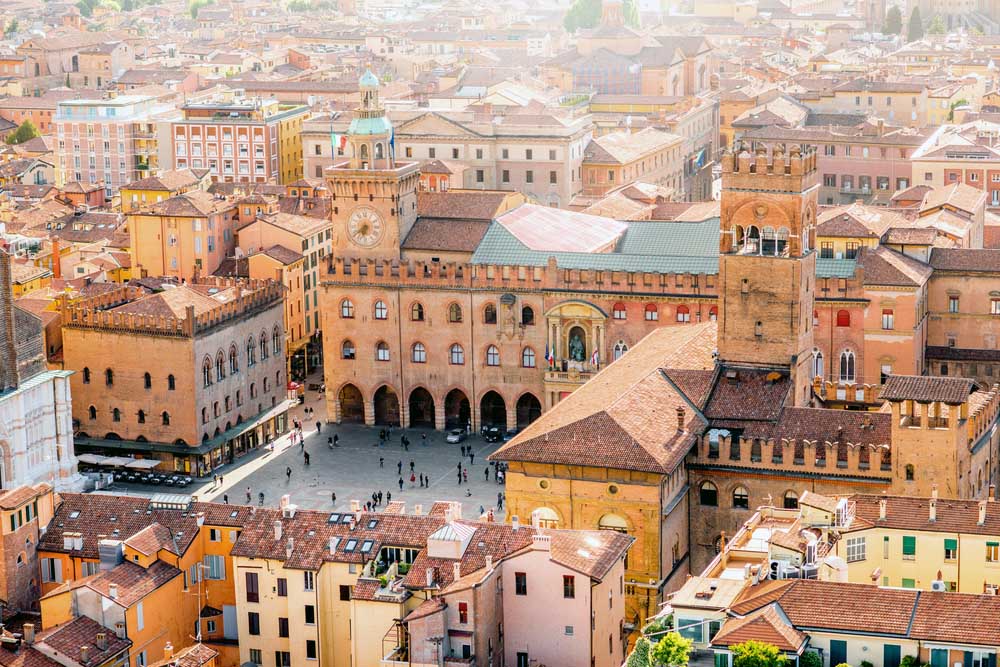 2.00pm: Enjoy coffee and window-shopping by the ancient university

Take Via dell’Archiginnasio where porticoes shelter elegant designer stores. Visit the frescoed Palazzo dell’Archiginnasio, first seat of Europe’s oldest university and where, in the Teatro Anatomico, some of the earliest dissections in Europe were performed. Take a restorative coffee at Zanarini, an upmarket café with divine cakes on the corner of Piazza Galvani.

Head northeast to the Due Torri and gawp at the tipsy towers. These are the most potent symbols of the Medieval city, when Bologna bristled with around 120 towers and date back to the 12th century; they were probably originally used as watchtowers. Offload a few calories by taking the 480 steps to the top of Torre degli Asinelli. Wander around the nearby former Jewish Ghetto, now home to some delightful artisan workshops.

By organsing your Bologna holiday through Insight Guides' local experts, you can take this excursion as part of a guided tour. Submit a trip request today, to begin planning your adventure.

4.00pm: Absorb the energy of the university quarter

Wander along Via Zamboni for a flavour of the university, which was founded in the 11th century and is the alma mater of many illustrious names, including Petrarch, Erasmus and Copernicus. Today, it remains the top university in Italy and attracts over 80,000 students annually. The district is diverse and eclectic, and you will pass noble palaces converted to bustling faculties, bohemian bars, eclectic cafés and arty bookshops.

Time for a drink! Head to Le Stanze, the private chapel of the one-time Palazzo Bentivoglio at Via del Borgo di San Pietro 1, for a unique combination of cocktails and 16th-century frescoes. Palazzo Bentivoglio was sacked and destroyed in 1507 by the masses, discontented with the rule of the Bentivoglio dynasty. 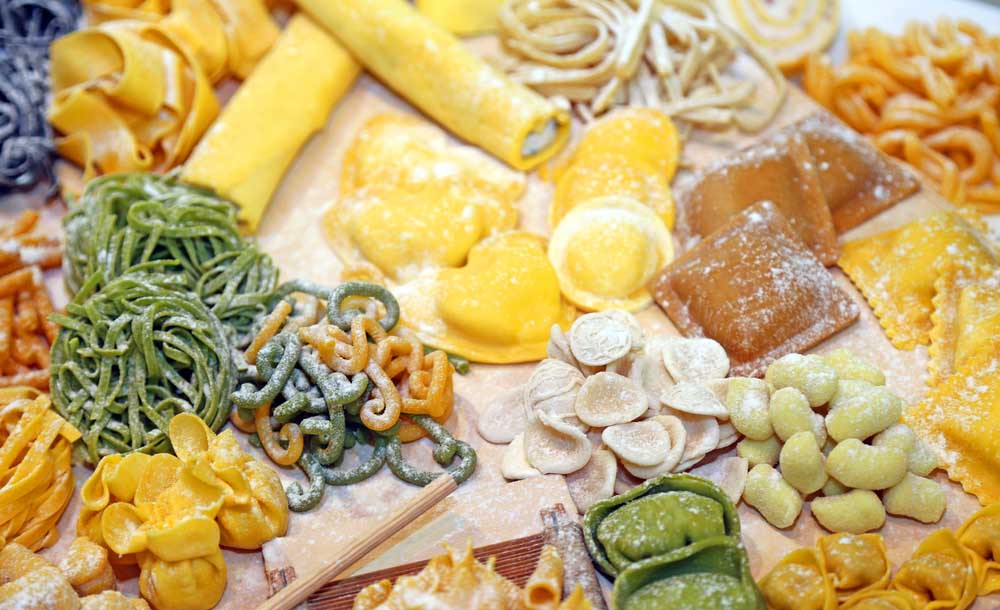 Bologna is famous for its different types of homemade pasta. Photo: Shutterstock

8pm: Dive into pasta at a trusty trattoria

Close by, dine on fabulous Bolognese pasta (made on the spot as you will see) at Dal Biassanot, Via Piella. Beside the restaurant take a peek through the Finestrella (little window) di Via Piella over the canal and you might believe you were in Venice. Bologna is known for its incredible plates of pasta – tortellini is especially popular – so don't miss out!

10pm: Late-night jazz in the cellar

Listen to the best live jazz in Bologna at Cantina Bentivoglio, Via Mascarella 4/B, in the antique cellars of the Palazzo Bentivoglio. As a lively university city, though, there is no shortage of bars, clubs, live music and cinemas in which to enjoy late-night entertainment.

Ready to take a trip to experience the best of Bologna?