Top 7 things to do in Mandalay

Mandalay's best things to do range from marvelling at the country's glitteriest site at the Maha Muni Pagoda to crossing its longest bridge at U Bein. Here's what not to miss on your trip to Myanmar's second city 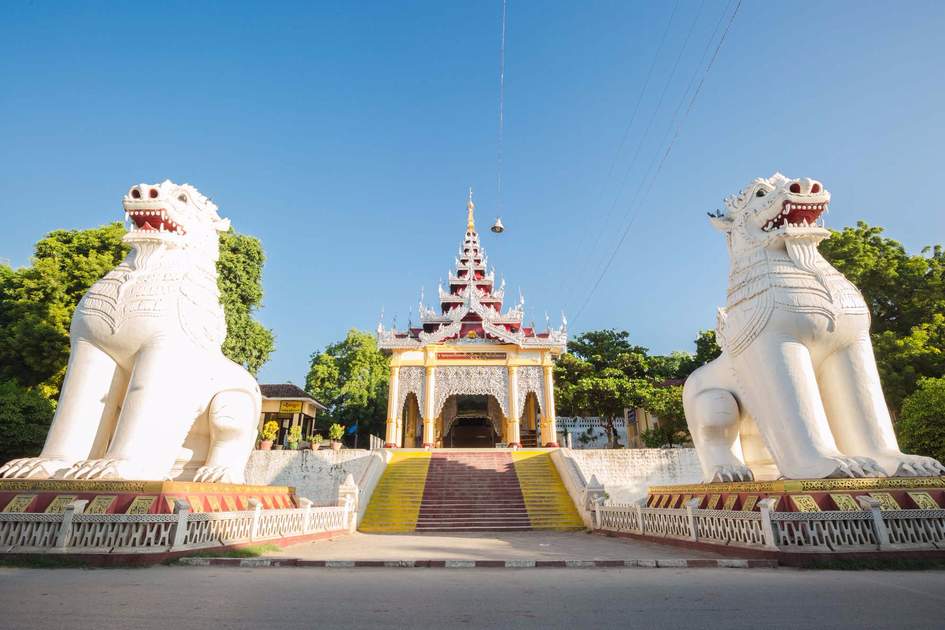 Since its creation as a royal capital, Mandalay has been a byword for everything that’s most exotic about Myanmar – from gilded pagodas to secretive walled palaces. The modern reality is somewhat different… With chaotic traffic and little peace and quiet. But give Myanmar’s second city time and you’ll discover plenty of sights and experiences worth of inclusion on your holiday itinerary

Insight Guides can help you with planning, organising and booking your trip to Myanmar. Simply, get in touch and share your budget, interests and travel style. Our local experts will create an itinerary that is exclusive to you and your requirements, which you can then amend until it's just right. Alternatively, browse and modify ready-made holidays to create your dream trip today.

The way to get your bearings on arrival is with a barefoot ascent of Mandalay Hill, the sacred stupa-studded hillock overlooking the northeast corner of the royal palace, from where an extensive, mesmerising panorama extends over the sprawling city.

Rising 240m above the city and its surrounding plains, Mandalay Hill has been an important pilgrimage site for Burmese Buddhists for centuries. It’s also an unmissable stop on your Myanmar itinerary. The most frequented southern route comprises 1,729 steps, taking around 40-45 minutes for you to reach the top. Along the way, you’ll meet friendly astrologers, palm-readers and souvenir paddlers who ply their trades. A friendly ‘no thank you’ and they’ll leave you to it. Four different stairways converge two-thirds of the way up the hill at the impressive, gold-plated Shweyattaw Buddha.

Go early to watch the sunrise over the city and to beat the midday heat. Alternatively, join Insight Guides' Myanmar Discover holiday for a guided trip to the top at sunset.

Remember to take your shoes off at the start of the hill, and bring something to wipe your feet with once you finish your descent (trust me, they get very dirty!).

2. Track down the world’s largest book

At the base of Mandalay Hill’s southeast stairway and surrounded by a high wall, is Mindon’s Kuthodaw Pagoda. Its central structure, the 30-metre-high Maha Lawka Marazein stupa, built in 1857, was modelled on the Shwezigon Paya in Nyuang U, near Bagan (which is an absolute stunner). The 729 whitewashed pagodas that surround it were erected in 1872 to individually house the marble tablets upon which, for the first time, the entire Tripitaka (the traditional term for the Buddhist scriptures) was recorded in Pail script, veneered with gold leaf. When first unveiled, it took 2,400 monks six months to recite the text, which is often dubbed ‘the world’s largest book’. Explore this mesmirising site for yourself on Insight Guides' Myanmar Highlights holiday.

No list of things to do in Mandalay would be complete without the city's most revered Buddhist shrine, the Maha Muni Pagoda. From the moment you enter, you’ll feel the magnificence for yourself from the hushed tones of worshippers and the unending glittering of the Buddha statue lying ahead. Rising 3.8m in height, it is covered in pounded, shimmering gold. So many offerings have been made to this one particular Buddha statue, that they a form a 15cm-thick, uneven carapace extending all the way around to the back of the statue. You’ll see the uneven, bumpy evidence of this across the statue’s legs. Come face-to-face with this revered site on Insight Guides' The Best of Myanmar tour. Away from the main attraction, in the temple’s northern corner, you’ll find six impressive bronze statues of Khmer origin, taken from the great temple of Angkor Wat. 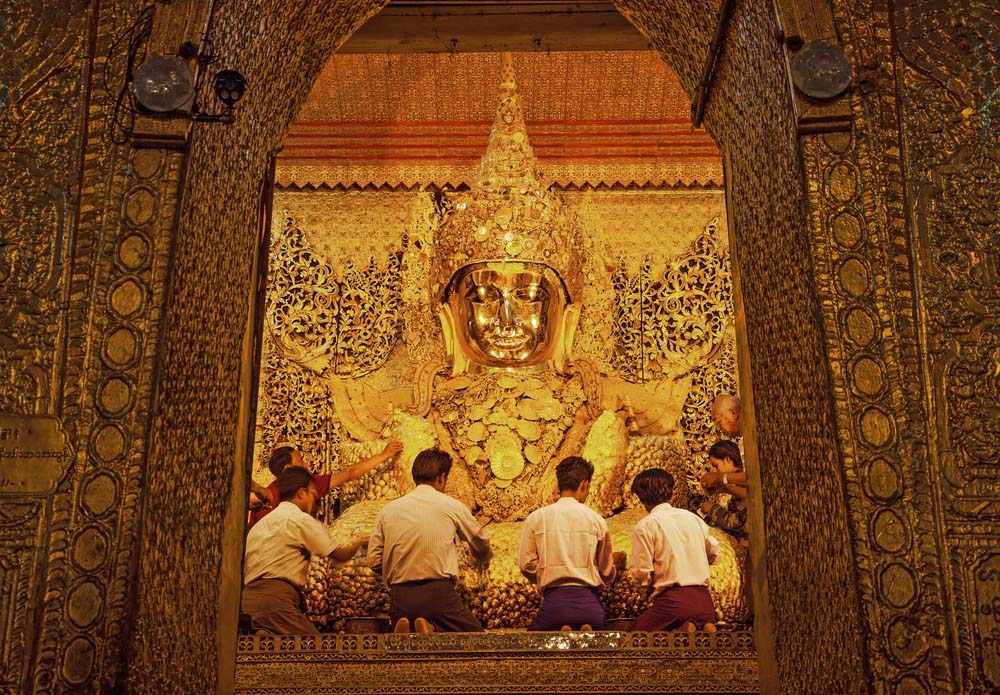 No list of things to do in Mandalay would be complete without including the grand Buddha statue in Maha Muni Pagoda. Photo: Shutterstock

The beautiful Shwe In Bin Kyaung, situated just south of 35th road in the heart of the city’s monastery district, was donated by a pair of wealthy Chinese jade merchants at the end of the 19th century. Richly carved with decorative motifs and scenes from the Buddha’s life, it retains a delightfully tranquil, off-track feel. The monastery’s style feels different to others around the city; made mainly from teak and dull in colour, it offers an alternative to the usual gold-coated, shiny sites. Come early in the morning and you’ll catch hundreds of monks streaming through its precinct and through the surrounding tree-lined lanes on their way to prayers.

South of the city centre, on the road to Amarapura, you’ll find the craftsmen’s quarter. Using the same skills and methods as their forefathers, the main focus of their work is, of course, religious sculptures: Buddha images in all positions, Buddha footprints, lotus-blossom pedestals and even an occasional statue of the Virgin Mary, as a throwback to colonial days and the early missionaries. You can observe Buddha figures being hewn from alabaster and marble by stonemasons on a street near the iconic Maha Muni Pagoda.

Gold leaf is produced in a large number of workshops in the southeastern section of Mandalay. This venerable craft is extremely old, and even in the 21st century, the manufacturing process is carried out according to a time-honoured tradition. When travelling around Mandalay, you should make a point of visiting other artisans, among the most interesting of which are the skilled silk and cotton weavers of Amarapura.

The mass of traffic and multi-lane highways around the city make it difficult to explore on foot. Organise a tour of the best workshops on your holiday with Insight Guides (like on Day 7 of Insight Guides' Myanmar: Ancient Treasures itinerary), where you can explore the city by bicycle, motor-taxi or with a private taxi.

On 84th Street, between 26th and 28th roads, is Mandalay’s most important market area and a great zone for aimless wandering, souvenir hunting, and people watching. The colonial-era buildings that originally stood here burned down long ago, to be replaced by more modern, Chinese-style precincts. Sprawled across a 12-acre site, Mandalay’s oldest market is home to all types of buys and buyers. As well as fresh produce and flowers, you’ll find local handicrafts, clothes, jewellery and furniture shops crammed in the maze of narrow back streets. Prepare yourself for a manic Mandalay experience: this place is a business market so you’ll find busy stalls, rushing shoppers and frantic bargaining. 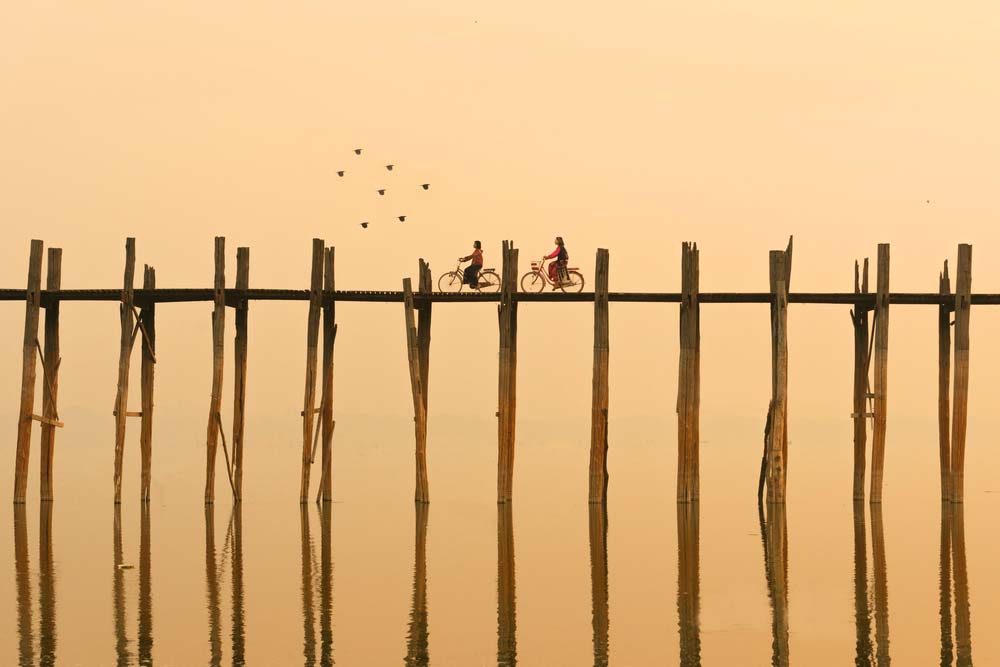 Crossing the U Bein Bridge as the sun rises is one of our favourite things to do in Mandalay. Photo: Shutterstock

7. Cross the iconic U Bein Bridge

To the south of the city, lies Lake Taungthaman, a seasonal body of water which dries up in the winter and leaves a fertile, arable land in its wake. It is spanned by the 1.2km-long U Bein Bridge, the longest teak bridge in the world. Little altered in two centuries, it takes around 10-15 minutes to cross on foot. The best time to view the bridge is early in the morning, when hundreds of locals (from farmers and market stallholders to groups of monks) begin their day by crossing over. Bypass the many tourists that arrive for the sunrise by watching from the far eastern side. Tea-sellers dotted along the bridge provide a short pit-stop as you cross. Alternatively, you can hire a small motorboat or paddleboat from the western shore and take to the waters. Our local experts can organise either for you on Insight Guides' Myanmar Dreams trip; review the full itinerary online now.

This blog was originally published on November 16, 2016

We have just returned from a fantastic tour through Vietnam which was booked through your company. Our guides on the trip were top class! We would like if possible to pass on thanks to all of them. They were all brilliant. From serious to funny, all great organisers and extremely knowledgeable in Hanoi, Hue, Hoi An and Ho Chi Minh City.