The capital of Italy's northern Piedmont region, Turin is a seductive city, where ornate cafés overlooking Baroque squares. A former industrial powerhouse, the city has reinvented itself as a hub of the arts, design and gastronomy. Here is our look at the top reasons for visiting Turin. 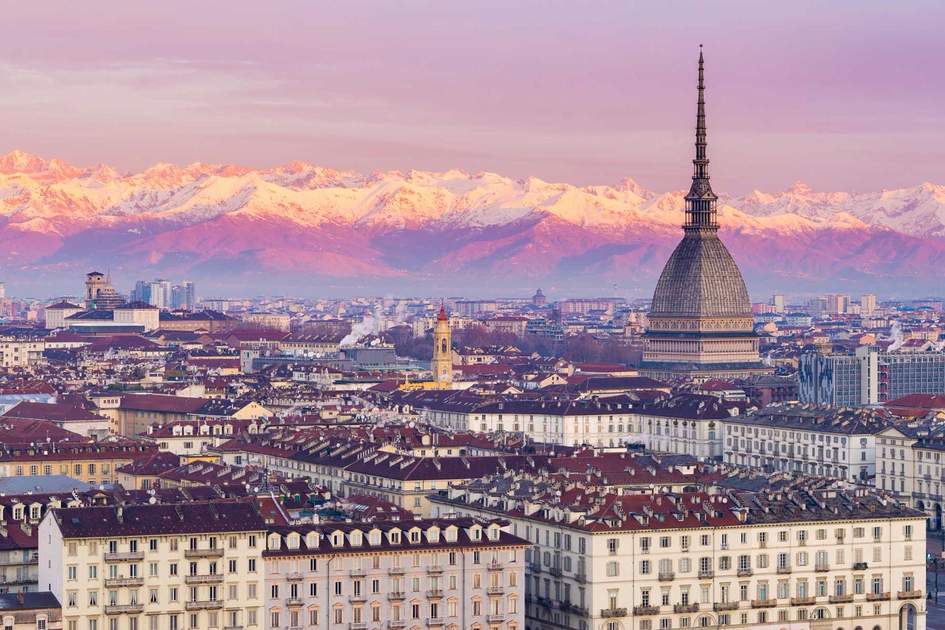 Turin now prefers to cast itself as a vibrant, visionary city, proud of its contemporary arts scene, its cinematic heritage and its cutting-edge design. The city has built on its car manufacturing heritage to become a place for all creative industries. Turin’s innate conservatism is being challenged by the city’s burgeoning new districts and by the success of Lingotto Fiere, an exhibition centre born out of the former Fiat factory.

As the cradle of Italian café culture, Turin abounds in opulent coffee houses and chocolate shops. Caffè Al Bicerin is the oldest, dating back to 1763. Still retaining its historic charm and elegance, this was once a popular haunt with the aristocracy, and has an impressive list of wildly famous visitors including Friedrich Nietzsche and Alexandre Dumas. Turin’s famous coffee-based drink, the bicerin, traces its origins to this café.

There are many more beautiful and atmospheric cafés in the city, usually with arresting décor, decadent chandeliers and ornate mirrors, carved wooden interiors and a mouth-watering array of rich cakes and pastries. Later on, between 6pm and 8pm, the ritual of the aperitivi remains an excuse to sample Turin’s aperitifs and tapas in beguiling old-world bars.

Founded in Piedmont in 1986, the Slow Food movement has conquered the world with its crusade against junk-food culture. Its manifesto declares: ‘Let us rediscover the flavours and savours of regional cooking and banish the degrading effects of fast movement’. Carlo Petrini, the founder explains: ‘The goal of this movement is the propagation of leisurely, more epicurean eating habits, and a more enlightened and patient approach to life.’

Italy remains one of the leaders in food and wine tourism, with hundreds of strade dei sapori (food trails) and strade del vino (wine trails). Turin is the capital of slow food, and where better to sit back and enjoy its menu of aristocratic Italian cuisine and the finest wines. Sample the delights of slow food at the bi-annual Terra Madre Salone del Gusto, staged in locations around Turin's city centre. 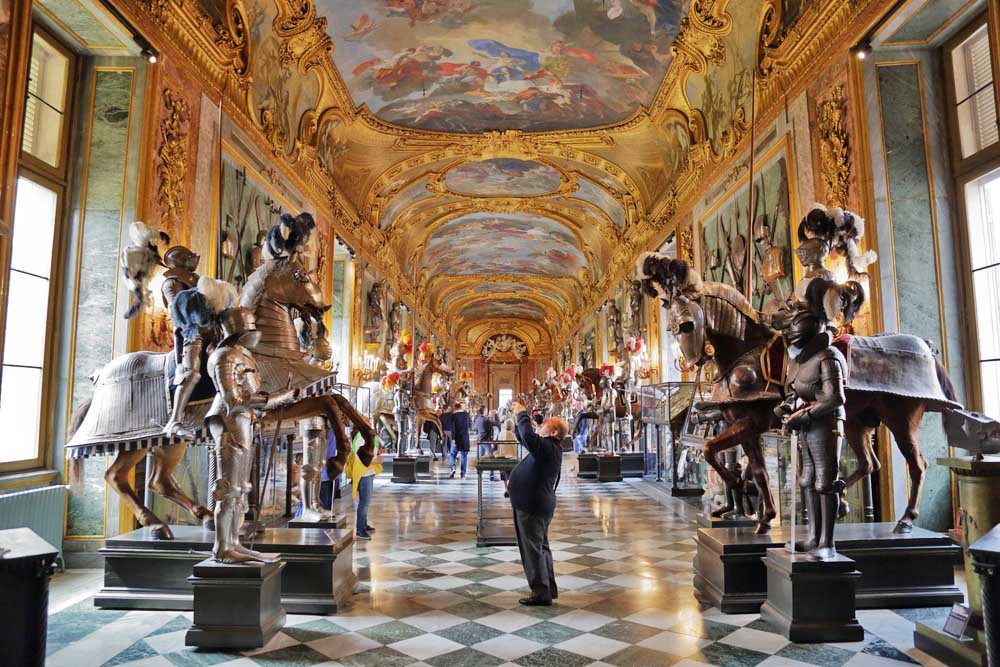 Turin’s creative confidence is demonstrated in the glut of cool art galleries and the stylish Luci d’Artista festival, which celebrates contemporary art installations in public spaces. The festival, aiming to promote Turin’s art scene, sees its streets transformed with Christmas lights and installations created by some talented artists.

In terms of galleries, modern art lovers will be tempted by the GAM (Galleria Civica d’Arte Moderna e Contemporanea). The museum has excellent visiting exhibitions and an illustrious permanent collection featuring works by such luminaries as Picasso, Modigliani, Chagall, Renoir and Klee. For more contemporary art, visit the Fondazione Sandretto Re Rebaudengo, where cutting-edge art is showcased in a minimalist gallery in the gritty San Paolo district.

To the west of the city, at the gateway to the Valle di Susa, lies the eye-catching Castello di Rivoli, which houses the Museo d’Arte Contemporanea. The imposing Baroque building, designed by Juvarra, contrasts with cutting-edge installations. Works by avant-garde artists such as Jeff Koons contrast dramatically with the stuccoed interior. There are around 400 pieces in the permanent collection, and major temporary exhibitions are also staged.

There’s also the Merz Fondazione and the Parco Arte Vivente PAV, a landscaped open-air exhibition space with an ecological theme.

There are several renowned museums worth visiting in Turin, many housed in opulent palaces. The Museo Civico di Arte Antica (Museum of Ancient Art) includes a copy of part of the famous Book of Hours of the Duc de Berry, illustrated by Jan van Eyck. The MAO (Museo d’Arte Oriental) showcases oriental art in an eclectic collection divided according to theme. The Galleria Sabauda in the Palazzo Reale is made up of the main art collection of the House of Savoy. This gallery is a treasure trove of Italian Masters, Dutch and Flemish artists and French landscape artists. Also open to the public are the Royal Armoury and Museum of Antiquities.

Then there’s the revamped Museo Egizio (Egyptian Museum) housed in the Palazzo dell’Accademia delle Scienze, off Via Roma. As the greatest assemblage of Egyptian treasures outside Cairo, the collection is unmissable. Its centrepiece is a statue of Ramese II, one of the masterpieces of Egyptian sculpture. Across the road in the Palazzo Carignano is the Museo Nazionale del Risorgimento Italiano, reopened in 2011 after renovation to coincide with the 150th anniversary of Italian Unification. Its 30 rooms display Italian nationalism through the eyes of not only Turin, Piedmont and Italy, but the whole of Europe too.

For its sheer theatricality, the star-studded Museo Nazionale del Cinema (Cinema Museum) is hard to beat. Set in a show-stopping, cavernous, former synagogue, the museum is dissected by a panoramic, glass-walled lift. This is the iconic Mole Antonelliana, a local landmark.

From 1906 to 1916 Turin was the world film-production capital, until overtaken by Hollywood. The story of cinema is told through myriad means, from film clips to costumes ranging from Marilyn Monroe’s bodice to Fellini’s scarf, coat and hat. The ride in the lift to the top leads to spectacular views over the city and the Alps.

Turin has a multitude of lovely piazzas, palazzos and churches in its historic centre. Piazza Castello is a huge rectangular Renaissance square planned in 1584; in its centre stands Palazzo Madama, a 15th-century castle. Here too is the Baroque church of San Lorenzo, once the royal chapel. The royal residence was the 17th-century Palazzo Reale. From its balcony, Prince Carlo Alberto declared war on Austria in March 1848. Saunter around and take in the atmosphere.

Behind the Palazzo Reale, in Piazza San Giovanni, are the Renaissance Duomo (cathedral) and Baroque Campanile. The Duomo was damaged by fire in 1997, but fortunately the flames did not consume the Cappella della Sacra Sindone. The chapel contains the Turin Shroud, for centuries believed to be the shroud in which Christ was wrapped after the Crucifixion. The cloth is imprinted with the image of a bearded man crowned with thorns. Although controversy reigns about the authenticity of the shroud, thousands of fervent believers, including Pope Benedict, prayed before it on its most recent outing in 2010.

Spending some time wandering around Turin’s historic heart is a pleasant experience, and one not to miss when visiting the city.

It is no surprise that the car capital of Italy has a fine car museum. It can take hours to explore the Muzeo Nazionale dell’Automobile. The museum has a vast exhibition space, and has a first-class library and documentation centre, a bookshop and an auditorium. Exhibits include the earliest Fiat, the Itala that won the world’s longest automobile race (between Peking and Paris in 1907) and an elegant Rolls-Royce Silver Ghost.

This area south of the city centre was the heart of Turin’s car industry. The Fiat company, founded in 1899, made Turin the city of cars. The areas of Lingotto, Italia 61, Mirafiori and Millefonti, once the powerhouse of the industry, have been transformed into a multi-million-euro ‘suburbs project’, with many sports and leisure facilities, which were constructed for the 2006 Winter Olympics.

Turin still represents Italian passion for design and speed. In the revitalised Lingotto district, Turin’s former car factory is gorgeous enough to welcome the suitably high-tech NH Lingotto Tech, an Art Deco hotel with a racing track on the roof – an emblem of Turin’s prestigious design heritage. This spectacular rooftop test track was the setting for a Mini Cooper car chase in the iconic Italian Job movie but is now the preserve of hotel guests with a head for heights and a passion for jogging. 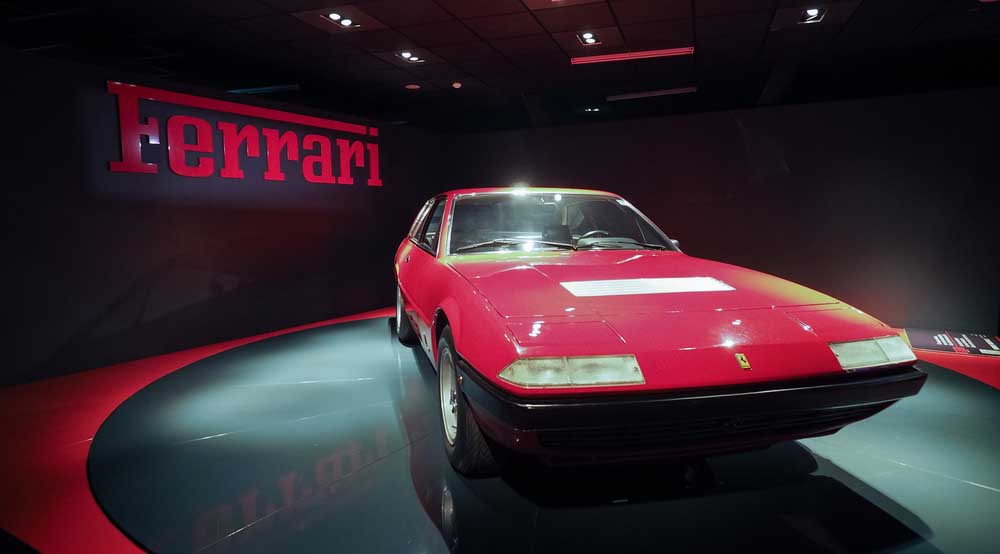 Lingotto’s final surprise is reserved for foodies. Eataly claims to be the world’s largest food and wine centre. Appropriately for Turin, it has a history: the factory that originally produced Vermouth has become a gastrodome in the fullest sense of the word. The aperitif was first invented here in 1786, when Carpano produced Vermouth by means of a secret blend of white wine and an infusion of herbs.

Today, reborn as a food laboratory, Eataly is dedicated to the tastes of Italy. As well as meals, curious visitors can take part in cookery courses, wine-tastings, ice cream-making or quiz top food producers and well-known chefs. Naturally, Eataly works with Slow Food because, in Turin, eating is always about food culture as well as flavour.

Ready to take a trip to Italy?

Simply get in touch with us to share your ideas for your trip and let us know when you would like to travel. Our local experts will then create a personalised itinerary based on your preferences, which you can amend until you're completely happy with every detail before booking. Our existing itineraries in Italy can offer inspiration, and keep in mind that all of our planned itineraries can be tailored to suit your specific requirements.