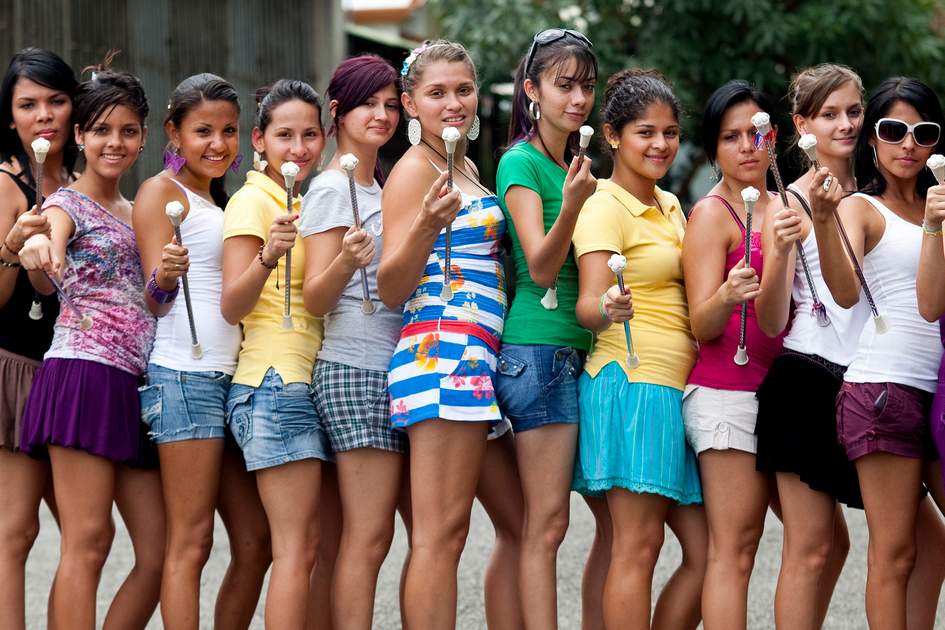 Culturally speaking, our destination of the week, Costa Rica, is not a simple place, but "we are all Ticos" is the proud claim.

Along with the overwhelming majority of Spanish-heritage Ticos, there are four other distinct ethnic groups. The people of Guanacaste have dark skin, and resemble their Nicaraguan neighbors in manner and accent. In the southern, mountainous regions of the country, the Amerindians of Costa Rica, who were here long before the Spanish, belong to six discrete linguistic groups. Though they increasingly speak Spanish, they still debate whether it is more important to retain their indigenous cultural identity or to assimilate more into mainstream Costa Rican culture. The blacks of the Atlantic Coast are the country’s largest immigrant minority; they speak Caribbean-accented English and talk with pride of their Jamaican heritage. Sino-Costa Ricans are called Chinos. Descendants of indentured laborers, they own many of the bars, restaurants, and stores, especially in small towns. And all these different races are Costarricenses. 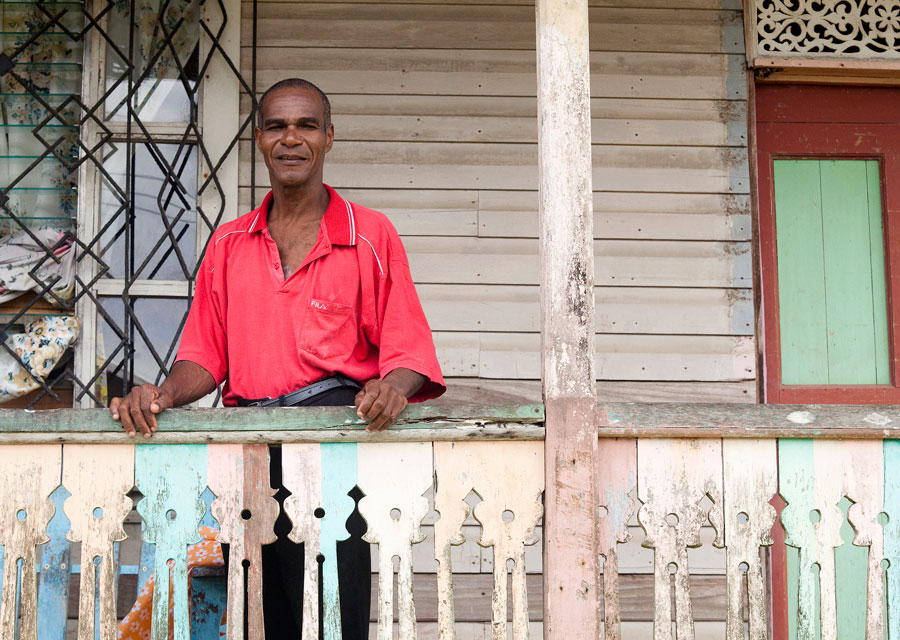 A Cahuita resident on the verandah of his wooden house in the traditional architectural style.

Costa Ricans call themselves Ticos in a reference to their use of the diminutive ending "ico": "Un momentico, por favor" (Just a little minute, please) or "chiquitica" (nice little girl). You’ll also hear a lot of "cito", as in "cafecito", (a nice little coffee). There is a sweetness to the way Costa Ricans speak Spanish. For instance, they will use the gentle verb "regalar" (give me, as in a present) rather than the direct "dar" (give me) when ordering in a restaurant. Ticos are politically temperate, too. Demonstrations protests, strikes, and rallies are common events, yet people behave respectfully, and election day has a distinctive party atmosphere.

A Latin American writer once observed: "The problem is that the Costa Rican looks too much to the North. He should be looking to the South." But even if he did, the Tico would insist that he is just as different from his southern neighbours as from the northern. Just go to Guatemala, Panamá, or El Salvador, and observe the differences. These countries are only short distances away, but the Costa Rican is as different from these other Latin people as, say, the Swiss is to the Italian, or the German to the Dane. Costa Ricans revel in the difference and are unabashedly proud of it. 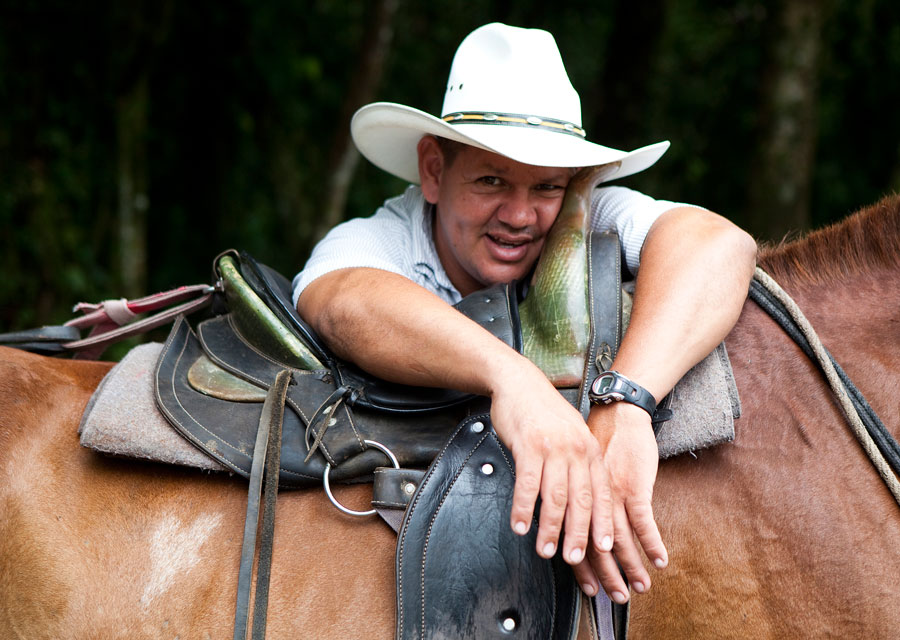 Horseback rider in the northeast.

To fly to Costa Rica, leaving behind the numbing babble of Los Angeles or the crowded bustle of Western European cities, and to head for a small town here is like leaping backwards to an earlier time. But it is not an earlier time by North American or even European standards; it is somewhere more idealized and far more precious.

In the villages and small towns of Costa Rica there is a connectedness, a familial unity. On the street, people will nod and say "Buenos Días" or "Adiós" even to complete strangers passing by. The family is still the main focus in this country. Young people usually live at home until they are well into their twenties and thirties, and some even stay at home after getting married.

The pressure of life in the cities is essentially at odds with this national character. But even for busy city people, the extended family is the focus of their social life, and many city families retain close links with their rural past, spending most weekends and holidays at family fincas (farms). 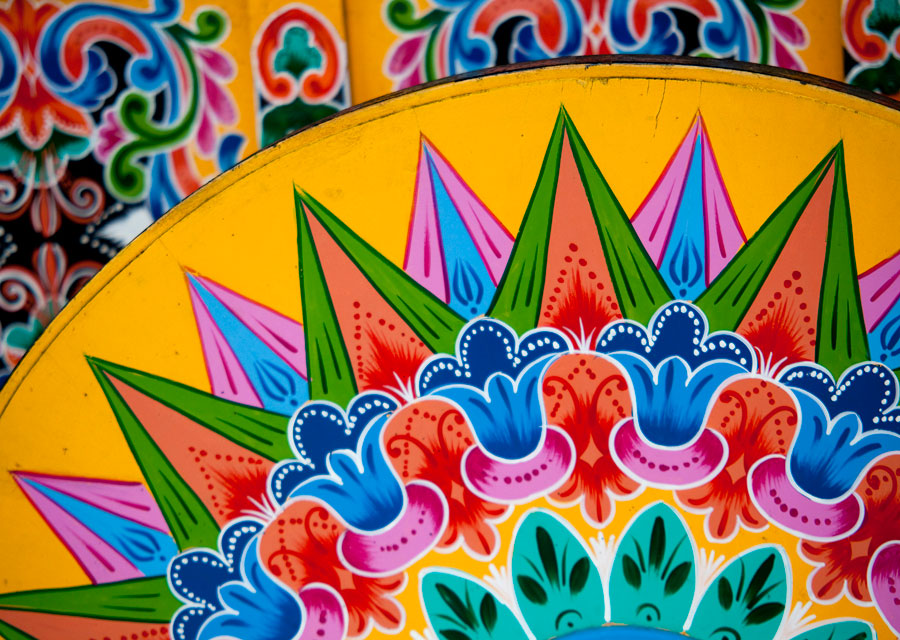 A traditional hand-painted ox-cart in the mountain town of Sarchí.

Costa Rica is a fragile country, sandwiched between politically volatile Nicaragua and Americanized Panamá. Foreign investors are able to buy whatever appears profitable; political and economic refugees come in from other parts of Central America; and drug dealers infiltrate the shores and ports of this relatively violence-free country.

Yet somehow you feel that Costa Rica will endure. Though Costa Ricans may not be perfect, they are essentially a democratic, benevolent, and peaceful nation. There is a kind of strength in their fragility. After coming to visit, many people from all over the world are inspired to do whatever they can to ensure the survival and intelligent growth of this vulnerable country and its peaceable people.