A flash of black and orange, a muffled growl from the jungle... spotting a tiger in the wild is truly magical. India is home to 70 percent of the world’s wild tiger population and where you are most likely to glimpse one of these majestic, elusive and endangered big cats. Here is our guide to tigers in India. 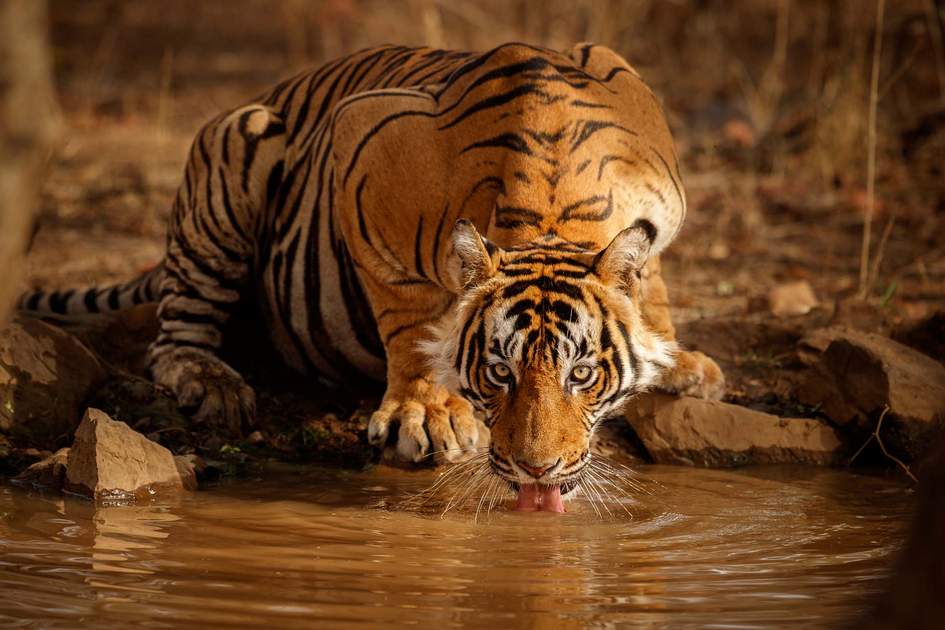 A hundred years ago there were more than 100,000 tigers living in the wild. After a century of decline in numbers as a result of habitat loss, retaliatory killings and poaching, today there are around 3,800 remaining tigers. However, numbers are on the rise due to the ongoing conservation efforts of organisations including the Golbal Tiger Forum. In India, there are around 50 reserves which support 70 percent of the tigers living currently living in the wild. Read on to discover some of the best places to see these magnificent animals in their natural habitat.

As one of the smallest parks and with a tiger population that is largely unfazed by humans, Ranthambore offers one of your best opportunities to see a Bengal tiger in its natural jungle habitat. With its proximity to India’s ‘Golden Triangle’ (Delhi–Agra–Jaipur), exceptional wild- and birdlife in addition to the tigers, and the atmospheric medieval Ranthambore Fort as the jewel in the crown, it is also one of the most-visited. There are estimated to be around 42 tigers in Ranthambore and with stripes as unique as fingerprints – and personalities to match – almost every tiger here has a story. There is Machali, the magnificent (toothless) ‘queen mother’, who loves to pose for photographs; her adventurous daughter, Krishna, who has two small cubs; naughty Arrowhead, who battled her siblings to gain prime waterside territory, and mighty Kumbha, who rules the roost and has fathered at least three litters. Jeep safaris can be booked through your hotel – for the pinnacle of luxury, stay at the tented camp of Suján Sher Bagh – or directly through the park. 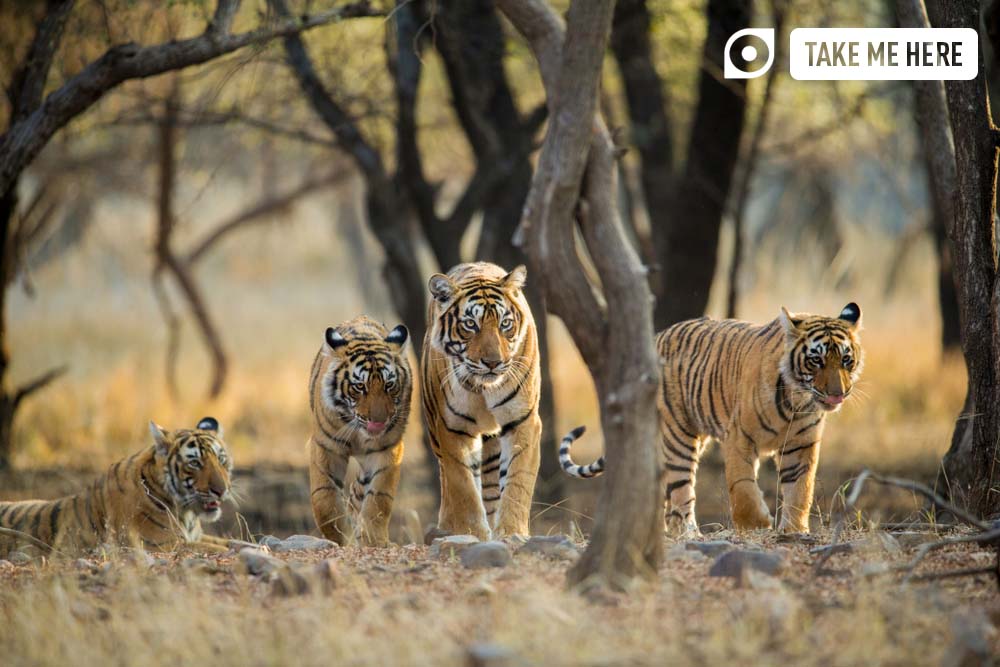 This national park is considered by many to be India’s premier national park and the place where Project Tiger was first launched in 1973, Corbett’s pristine forests shelter a population of around 164 Bengal tigers – the highest density in India – as well as 600 elephants, Asiatic bears, endangered Ghariyals, mugger crocodiles and more than 50 different species of birds of prey. The park is named after Jim Corbett, a British hunter-turned-conservationist, who was known for hunting several man-eating tigers and leopards and was instrumental in establishing India’s first national park. There are five different zones of the park to visit, with Dhikala having the best range of accommodation and variety of wildlife. Safaris are either taken in 6-seater jeeps or larger minibuses, and tours, ranging from two to four days, can be booked through the park. Corbett also offers overnight stays in the jungle at the Dhikala forest lodge – a basic but unforgettable experience.

With lush sal and bamboo forests and vast open grassland, Kanha National Park inspired Rudyard Kipling so much that he used it as the setting for his much-loved collection of stories The Jungle Book. Kanha is the largest national park in India and some say the most impressive. It supports a population of around 96 tigers, as well as sloth bears, black buck, nilgai, hyena, monkeys, mongoose, leopards and rare swamp deer, which the park has saved from near extinction. Accommodation in and around Kanha ranges from the park’s own rustic Kanha Jungle Lodge to the more upmarket tented camp (with pool) of Bagh Villas Jungle Camp and Spa. Due to its relatively remote location it is worth combining a visit to Kanha with a trip to the nearby tiger reserve of Bandhavgarh – which is known for its tiger sightings and has five wonderful tree house lodges in the heart of the jungle. 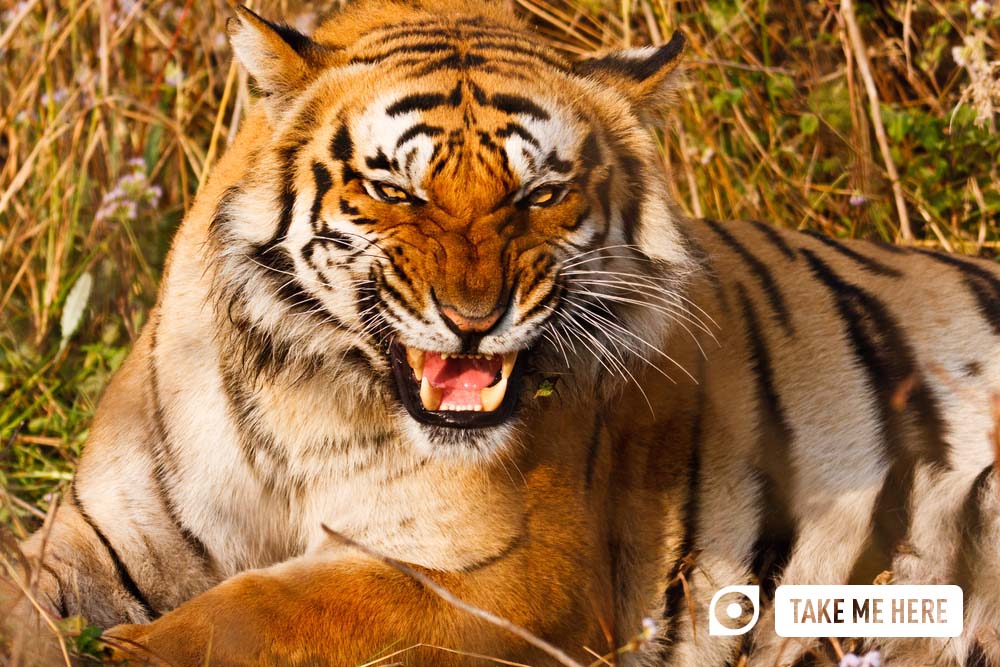 • Ensure your lodge provider has a Travel Operators for Tigers PUG eco rating certification, meaning that they follow best practice        and meet higher ecological and ethical standards as well as benefitting local communities

• Travel between October and June, when the weather is (relatively) cool and dry

• Ensure you use a reputable guide

• Reflect on the fact that tigers are, as the WWF states: ‘a vital link in maintaining the rich diversity of nature’. When we protect just    one tiger, we preserve 25,000 acres of forest

Insight Guides can help you with planning and booking your trip to India. Simply get in touch to let us know your ideas for the trip and when you would like to travel. Our local experts will then create a tailor-made itinerary especially, which you can amend until it's exactly how you want it. You can browse our pre-planned itineraries for inspiration, and keep in mind that they can all be tailored to suit your specific needs.