Top 10 things to do in Jordan

Locations straight out of the Bible, spectacular drives amongst Red Sea coral reefs and camel treks through deserts are all waiting to be experienced in Jordan. Here are 10 of the top places to go... 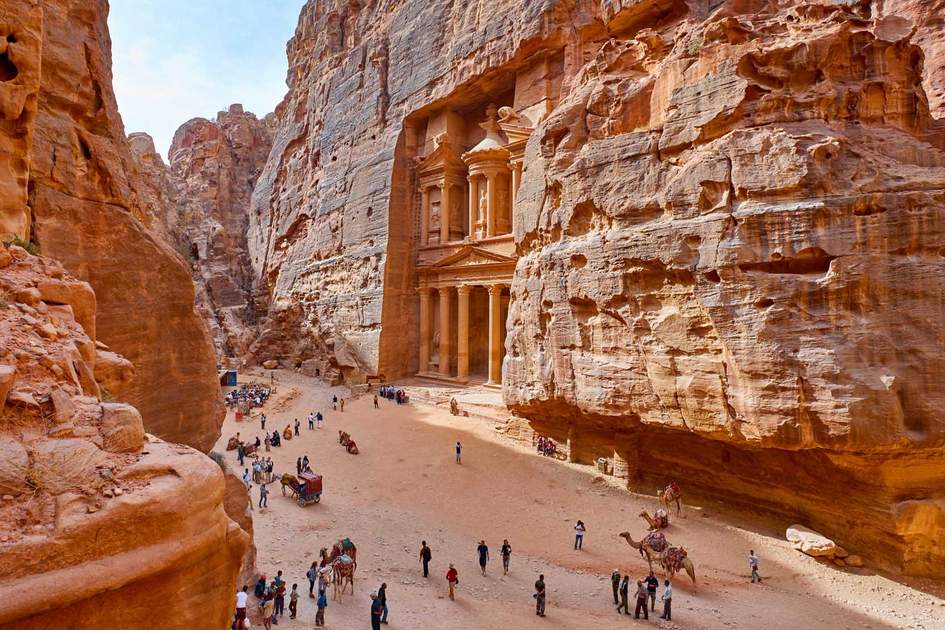 The temple-mausoleum of Al Khazneh in the ancient city of Petra in Jordan. Photo: Shutterstock
PrevNext

Lying a few kilometres south off the Desert Highway (Al-tariq al-sahrawi), this stunning landscape of soaring cliffs, pinnacles and desert dunes has inspired many travellers, including Lawrence of Arabia who made it famous. Be inspired yourself by booking onto Insight Guides’ Treasures of Jordan trip today. Pilgrims, traders, herdsmen and caravans have journeyed here for millennia; few have been untouched by it. The area takes its name from the largest and grandest of a whole network of wadis (valleys), which have long offered the easiest passage through the area to the nomadic Bedouin and trading caravans en route to or from the Arabian peninsula. Around 6,500 Bedouin, mainly of the Howeitat tribe, are thought to live here, though many are now settled or semi-settled in the villages around Wadi Rum. With 105,000 visitors in 2016, tourism is a lucrative business here, and many Bedouin today serve as guides or run the camps of the area.

Bobbing like a cork in the viscous waters of the Dead Sea is a must-do activity, which you can experience with Insight Guides on the Discover Jordan tour. One of the country’s top attractions, the Dead Sea, part of the famous Great Rift Valley, lies less than an hour’s drive from Amman. The area continues to draw visitors from around the world for its unique water qualities, climate and historical and spiritual significance. Round the experience off with a massage or beauty treatment using Dead Sea mud in one of the luxury spa hotels. 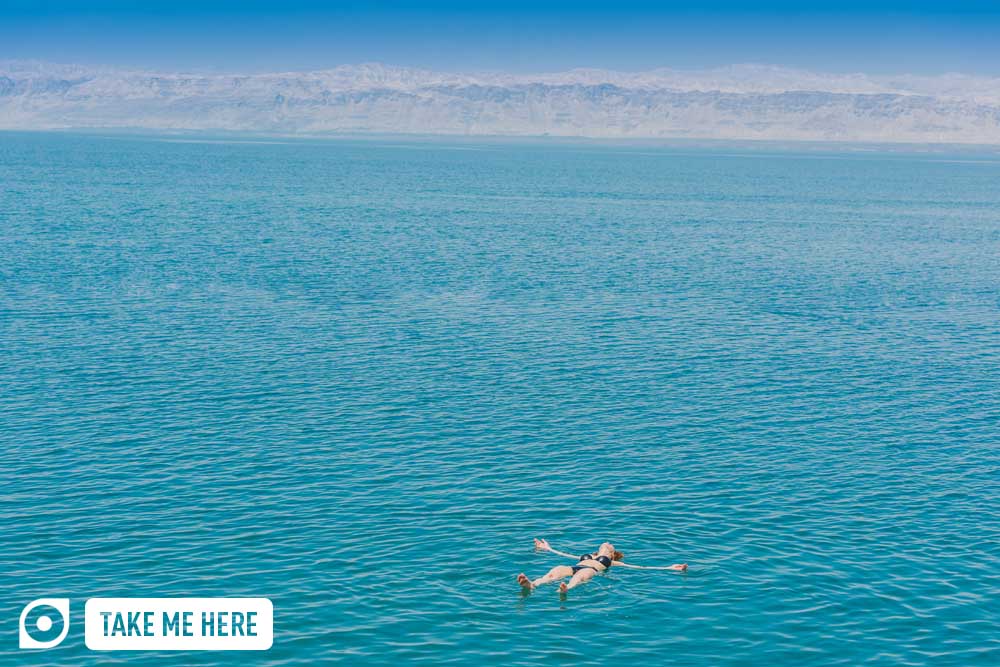 Dubbed the ‘Pompeii of the East’, Jarash in northern Jordan is one of the best-preserved and most evocative Roman towns in the world. The spectacular ruins are rivalled in Jordan only by those of Petra. And while Petra relies partly on the amazing beauty of its natural setting for its impact, Jarash is a man-made treasure, built over fertile rolling highlands. As part of the Roman Decapolis, Jarash enjoyed a high degree of prosperity, wealth and civic development. Its diversity of economic activity – iron-ore mining, agriculture and trade – supported a rich culture quite at home with luxurious living. Greek inscriptions at the South Theatre (Almasrah al-janubi) give the names of wealthy donors. The monuments of Jarash also tell the tale of the empire’s decline. The fragmented remains of splendid baths indicate the destruction wrought by successive earthquakes, while a concentration of churches – many built out of stones taken from pagan temples – testify to the rise of Byzantium, by which time Jarash, the Roman entity, was almost over. Visit today on the Treasures of Jordan trip.

Attractive and tranquil, Ma’daba contains one of the great treasures of the early Christian period: the Ma’daba Map. The earliest-known map of the Holy Land, it’s just one of myriad ancient mosaics that litter the town. Relatively affluent, culturally mixed (more than a third of the population is Christian, and a good number of immigrants have made their home here) and well used to tourists, the town has a relaxed, laid-back air that many travellers take to. It also has a good range of hotels, restaurants and cafes, as well as well-touted attractions.

The famous rose-red, rock-cut city of the Nabataeans, hidden in a valley in southern Jordan, is a Unesco World Heritage Site and one of the Middle East’s must sees. Uniquely, it combines spectacular ancient ruins with sensational natural scenery. In 2007, the site was voted worldwide as one of the ‘New Seven Wonders’. From sunrise to sunset, a steady stream of tourists tread the millennia-old footpaths, yet the numbers never manage to diminish the majesty of the place or its mystery. Though Petra was first and foremost a Nabataean city, the magnificent funerary monuments and prolific references to gods, animals and mythological beings combined with the looming rockscapes and continual shifts of light and shade create an almost supernatural era. The city is exceptionally well preserved. All but abandoned by the late 8th century, the architectural and artistic details of the monuments appear amazingly fresh. In many places, the carving is almost as sharp as it must have been 2,000 years ago. Though Petra has helped shed much light on the relatively sophisticated and cosmopolitan culture of the Nabataeans, whole powerful kingdom-confederation stretched from the Red Sea all the way to the Euphrates, much remains shrouded in mystery. Exactly when, why and how the kingdom went into decline, for example, is still unclear, though archaeologists believe that Petra still holds many secrets that are just waiting to be revealed. With a reputed 80 percent of the city still unexcavated, that’s very likely. See the ancient city come to life on Insight Guides’ Discover Jordan itinerary. 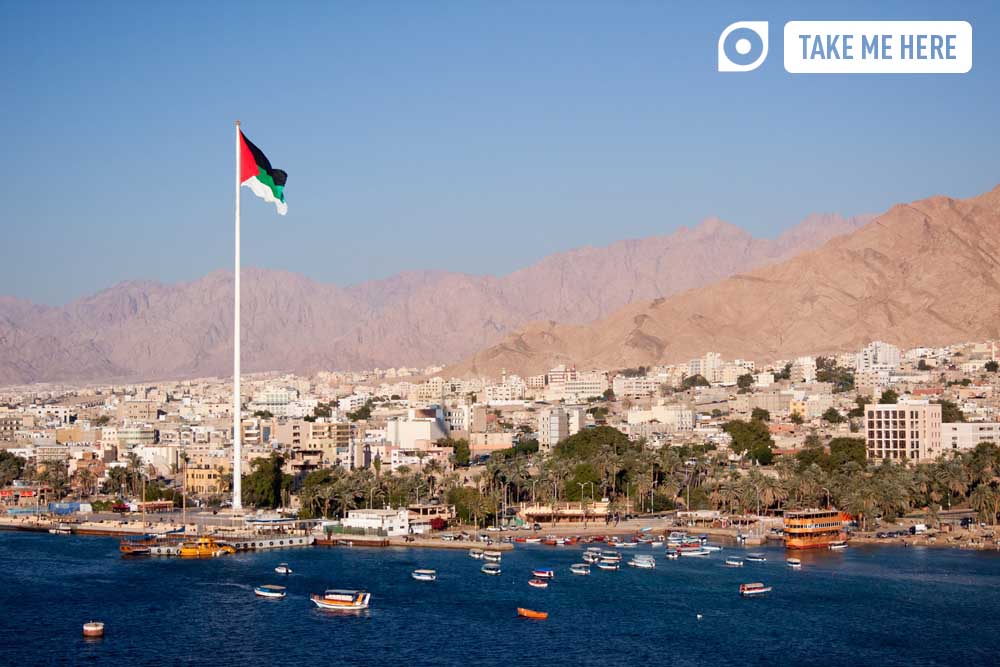 As Jordan’s only outlet to the sea, the port city of Al-‘aqabah evokes a feeling of freedom and a promise of fun and relaxation to most Jordanians, who flock to their country’s only real beach resort whenever possible. It is known for its clean, sandy beaches and agreeable climate, especially in the spring, autumn and winter. When the temperature in Amman is a chilly 0-10 degrees centigrade, in Al-‘aqabah it can be a pleasant 25 degrees. The main appeal of Al-‘aqabah for most travellers lies in its offshore coral reefs. Deep water lies close to the Golf coast, creating a fascinating marine environment where divers may encounter a wide variety of species, including the largest fish in the world, the whale shark. The marked diurnal tidal range also supports an interesting array of shore life that can be investigated at low tide, with rocks carpeted in creatures such as limpets, chitons and periwinkles that have adapted to survive the constant to and fro, from submerged world to air and strong sunlight. Insight Guides’ Discover Jordan tour takes in this marine paradise.

In Jordan’s far north lie the impressive and atmospheric Roman ruins of Umm qays. Sitting on a long, high promontory, the views from here are breathtaking. As the guides like to point out, it overlooks four countries: Jordan (the North Jordan Valley), Syria (the Syrian Golan Heights), Israel and the Palestinian Territories (Lake Tiberias or Sea of Galilee) to the northwest. Umm qays is also unique in another way: it consists of two quite distinct historical components – the late 19th/early 20th-century Ottoman town clustered on the summit and largely built from stones reused from the classical town below.

Lying in western-central Jordan, Dana is Jordan’s largest, most diverse nature reserve. Hiking one of the beautiful trails makes a great break from the cities or Roman ruin trail. Dana Biosphere boasts four quite distinct ecosystems. A research facility to study the local flora, fauna (including the rare ibex) and archaeology is ongoing, as is an initiative to revive village life (many of the former residents have migrated to more modern towns) and restore the old village houses, turning them either into living quarters or handicraft and organic foodstuffs centres.

East of Amman lies a string of Ummayad strongholds, rising from the flat and barren earth, which served as pleasure palaces and hunting lodges. Explore them in style with Insight Guides on our Discover Jordan tour. Settlement is limited, and though Bedouin still eke out a living here, their survival is a testament to their timeless resourcefulness and endurance. In 1896, Alois Musil, an Arabist from Prague, was told by Bedouin of richly decorated buildings deep in the desert. Two years later he returned, and within a few days found two of these palaces, Qasr at-Tuba and Qusayr ‘amrah. In the following months and years, several more were discovered. Though not quite ‘palaces’ (the meaning of the Arabic word qasr), nor castles (as they are called in English), they are nonetheless exceptional examples of Islamic domestic architecture in its earliest days, taking inspiration from Byzantine and Persian art, but also showing the beginnings of a unique and original style and personality. Don’t miss the stunning frescoes at the Unesco World Heritage Site of Qusayr ‘amrah. 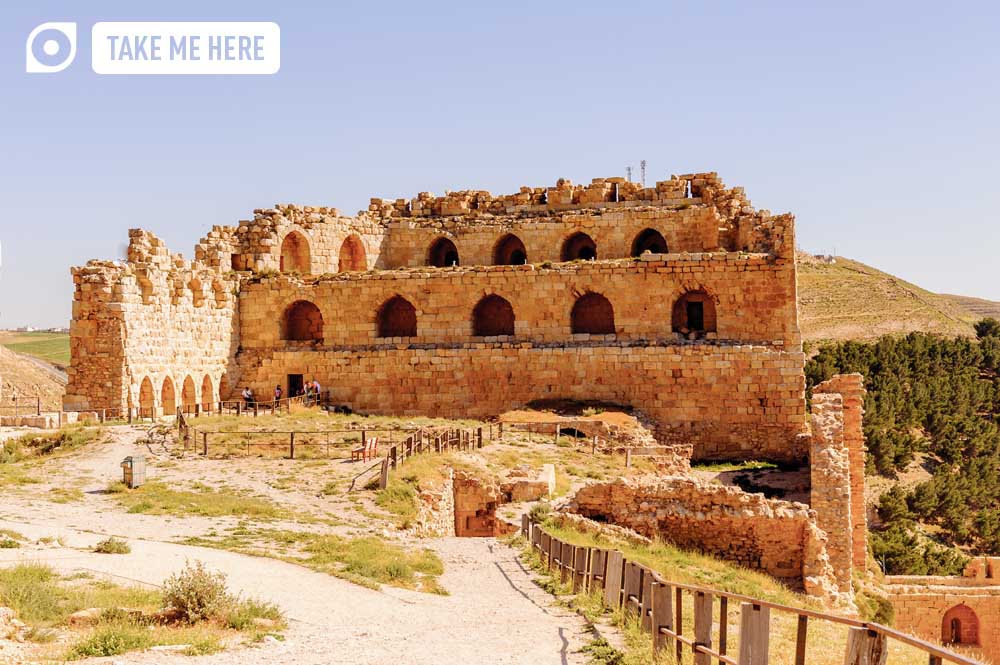 As impressive for its vast walls and sturdy defences as its colourful and bloody history, Al-karak is one of the most fascinating crusader castles along the King’s Highway. Though sadly in the news more recently as the focal point of a terror attack later claimed by ISIL, this is one of Jordan’s greatest historic sites. It has always been valuable because of its strategic position at the head of the Wadi al-karak leading west to Palestine. The visible remains of the castle date mainly from the Mamluke era. Originally, access was by small tunnels hewn through the rock and these are still visible under the impressive facade, which links four square towers above a stone glacis (a slope, often artificially strengthened). A boardwalk takes visitors through tourist souvenir stalls and along the edge of a fosse en route to the entrance of the castle. There are superb views along the way down to the Dead Sea. Al-karak is a castle to be explored; there are many dark passages, cavernous holes and the occasional sheer drop (many of them unfenced, so beware). Because the castle was occupied and altered by successive powers right down to the brief Independent Republic of Moab in 1920, it is difficult to sift one period historically from another. Much also remains buried beneath modern Al-karak. You’ll be in safe hands if you decide to visit with Insight Guides – book onto Treasures of Jordan today for the experience of a lifetime.