Top 5 things to do in Bogotá

Set high in the Andes, surrounded by the verdant peaks of the Cordillera Oriental, Colombia's cultured and cosmopolitan capital, Bogotá, is home to some of the best-preserved colonial neighbourhoods in South America. Read on for our selection of the top five things to do in Bogotá. 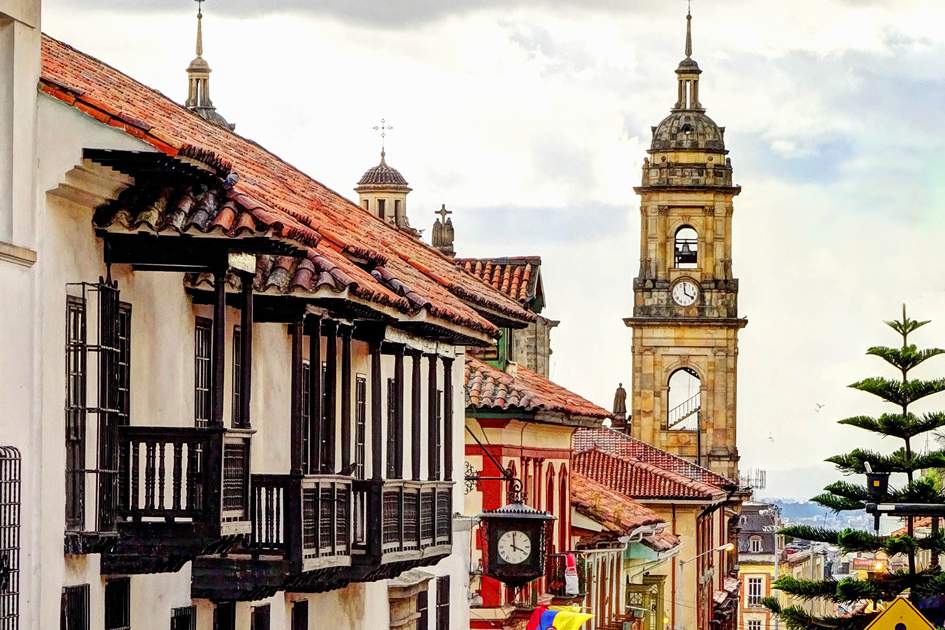 Touring the colonial Candelaria district is one of the top things to do in Bogotá, Colombia. Photo: mehdi33300/Shutterstock
PrevNext

As a modern capital city, Bogotá’s sprawling metropolis is ever expanding, but historic neighbourhoods and grand plazas at its cultural centre provide links to Colombia’s colonial past. While the pace of life in the city can be chaotic, this is also the intellectual hub of Colombia. In the streets of Bogotá, you will find numerous theatres, vibrant university life, world-class museums, bookshops, and excellent art galleries, all pulled together in an effervescent tumult.

The broad public square of Plaza de Bolivar is the colonial and historic heart of Bogotá. Lined with monumental buildings, its broad expanse attracts a cross-section of life in the city – young couples, families with children, students, international visitors, street-food vendors, and an ongoing flurry of pigeons, for which you can buy corn to feed. Presiding over it all is a statue of stately Simón Bolívar, clad in military dress and sword in hand. Many plazas in other towns and cities throughout Colombia and Venezuela are named after the great Liberator.

Buildings overlooking the square include the elegant, twin-towered 19th-century Cathedral; the National Capitol, accommodating the nation’s two houses of Congress; and the French-style Palacio Lievano, featuring an extensive colonnaded arcade along its front. On the north side, the Palacio de Justicia (Palace of Justice) dominates the plaza. The original building was badly damaged in 1985 when M19 guerrillas laid siege to it. Subsequently rebuilt, its muscular symmetrical design projects an image of fortification and security above all else. 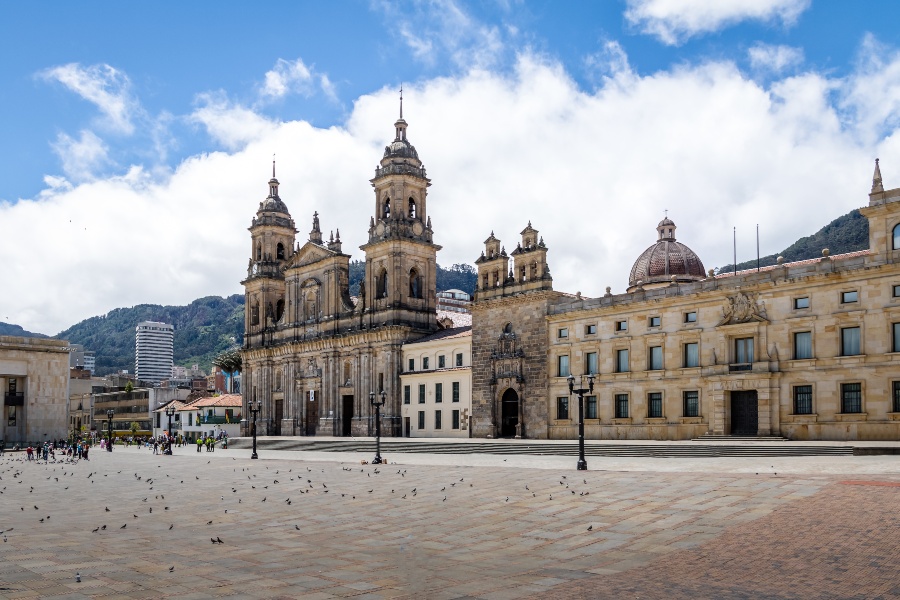 A short stroll away from Plaza de Bolívar, the picturesque quarter of La Candelaria is the cultural centre of the city. Single-story ochre and whitewashed buildings seem to creep up the hillside, their red-tiled roofs stretching out towards the city centre. Numerous carefully preserved colonial homes with internal courtyards have been converted into bars, restaurants, museums, hostels and boutique hotels, dotted amongst 18th-century churches and houses.

The higher streets of the district, along Carreras 2 and 3, have extravagantly graffitied walls, and at the corner of Carrera 2 and Calle 12b, the Plaza del Chorro de Quevado is a colonial square where Bogotá is believed to have been founded in 1538. There’s a modest fountain, a diminutive white chapel and a number of small cafés. Most interesting is the impossibly narrow, cobblestoned stretch of Carrera 2 leading off the plaza, lined with quaint houses and tiny bars and shops. 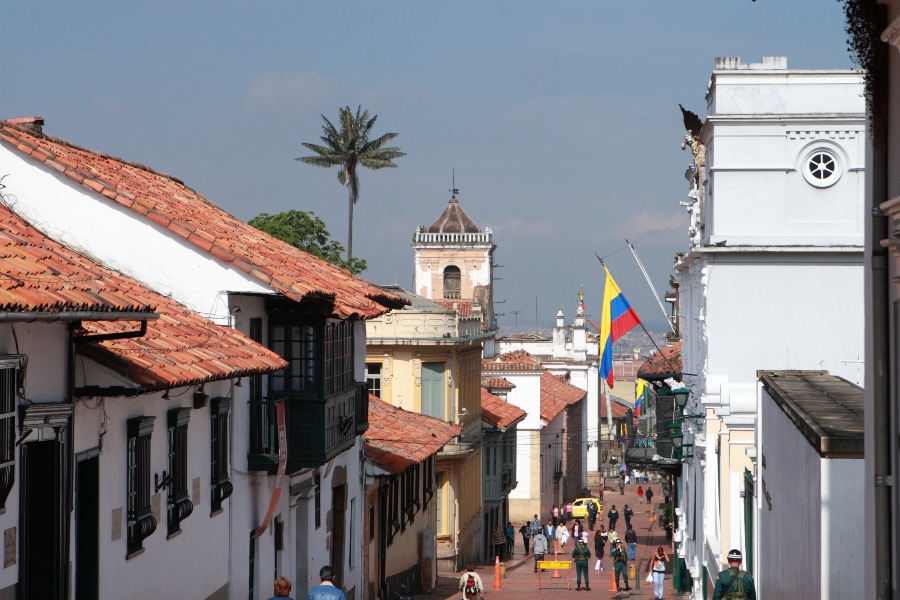 One of Bogotá's most impressive museums, the Museo de Botero houses one of the finest collections of modern and Impressionist art in Latin American. Tastefully displayed in an elegant colonial mansion a few blocks away from the Plaza de Bolivar, the collection was donated by Colombia’s greatest artist, Fernando Botero.

Numerous wonderful works by Botero are on display here – paintings, drawings and sculptures – all of which feature his signature style: figurative subjects displaying exaggeratedly plump proportions, and they primary subjects they deal with are life in Colombia and abuses of power. The collection also features masterpieces by European artists including Monet, Renoir, Matisse, Dalí, Braque, Chagall, Picasso and Miró.

The view over the expansive sprawl of Bogotá from the top of Cerro de Monserrate is the most spectacular you can have of the city. This verdant hill is crowned by the Santuario de Monserrate church, which is one of Bogotá’s most easily recognizable landmarks. You can take the funicular railway to the top, or ride the cable car over bushy eucalyptus trees until you reach your destination, at a height of 3,152 metres (10,340ft).

Alternatively, tackle the 90-minute hike up the stone footpath from the base of the hill to the summit 600 metres above. If you opt for the latter, be aware that robberies sometimes take place on the hill during the week. The safest time to go is early on Sunday morning, when you’ll be accompanied by dozens of Bogotános on their way up to attend mass in the church at the top. 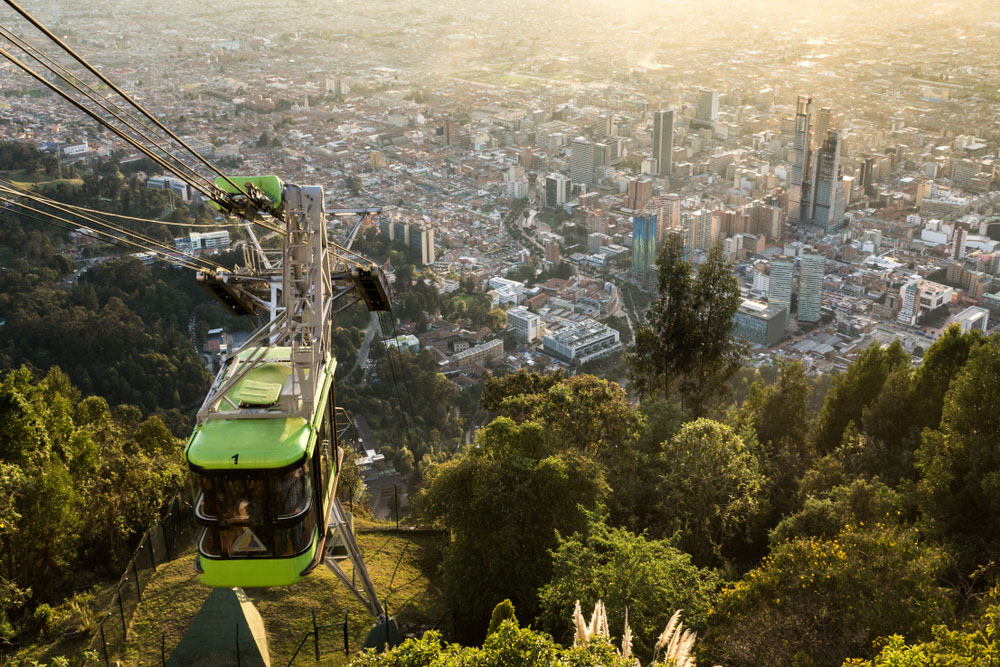 Housed within the Banco de la República building, overlooking the leafy downtown plaza Parque de Santander, Bogotá’s Museo de Oro houses the largest collection of gold ornaments in the world. Colombia has a pronounced and well-preserved indigenous heritage, and a visit to the museum provides a fascinating insight on this culture.

Displays focus heavily on pre-Colombian indigenous groups and their relationship to the land and precious metals, with one section devoted to the metallurgical history of Colombia’s tribes and the processes they used to mine and shape gold, bronze, and copper. The third floor features, La balsa de Eldorado, a small gold raft sculpture representative of the Muisca people’s ceremonial offering to their gods.

On the museum’s top floor, visitors are shut into a circular low-lit room where, to a soundtrack of running water and shamanic chanting, the lights gradually come on to reveal a breathtaking display of hundreds of gold pieces surrounding them, with yet more on display in the glass floor beneath their feet. 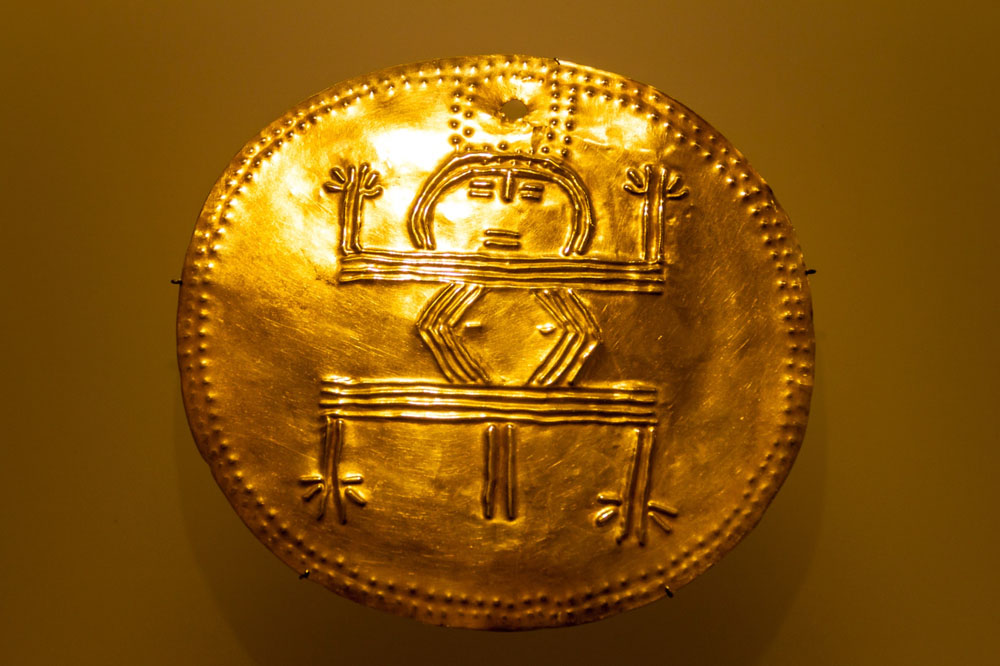 Golden plate in the Museum of Gold in Bogotá, Colombia. Photo: Matyas Rehak/Shutterstock

Ready to take a trip to Colombia?

Our local experts can organise fantastic trips to Bogotá and Colombia for you. To get started, simply get in touch to let us know your ideas for the trip and when you would like to travel. We will then create a personalised itinerary especially for you, which can be amended until you are happy with every detail before booking. You can browse our existing itineraries for inspiration, and keep in mind that all of our pre-planned itineraries can be fully tailored to suit your own specific requirements.