Top things to do on the Greek Islands

The Greek Islands rank among the most alluring realms in the Mediterranean. From visiting atmospheric old towns, ancient temples, and labyrinthine monasteries to exploring sandy shores and enjoying water sports off golden beaches, here is our look at the top things to do on the Greek Islands. 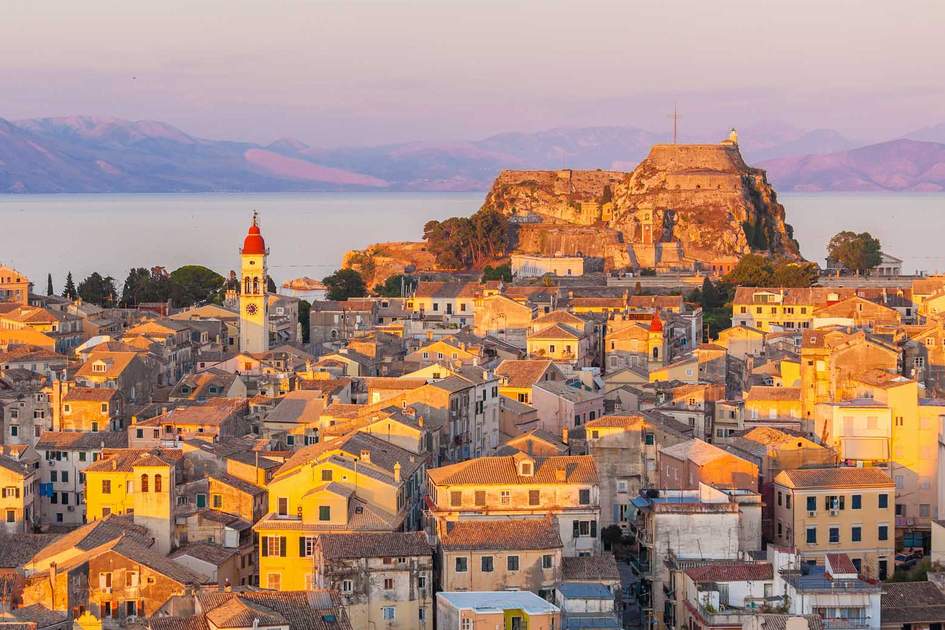 Clean, cobalt-hued seas, beaches of all sizes and consistencies, the availability of a range of sophisticated water sports, and up to eight reliably sunny months a year ensure a winning combination for the Greek Islands. With recent infrastructure changes and ongoing development of facilities for visitors, the vivid, rough-and-ready country that first attracted large numbers of artists, writers and the generally bohemian during the 1960s has finally come of age. Read on to discover our pick of the best things to do on the Greek Islands.

An unusual blend of the Ottoman and Venetian distinguishes this port, a double bay with ample eating, drinking and people-watching opportunities. This is Crete’s second city, its capital until 1971, and one of the oldest continuously inhabited cities in the world. The highlight of the Old Town is the double Venetian harbor, where broad quays are backed by characterful, colorful old buildings, their reflections shimmering in the water. The ambience is of the Levant and this is the place for the vólta or evening stroll.

Sights include the restored 1645-vintage Mosque of Küçük Hasan, by two years the oldest mosque in Crete; Fírkas Bastion; the Byzantine Museum, with icons, jewelry, coins, a floor mosaic and fresco fragments rescued from country chapels; the Archaeological Museum, located inside a former Franciscan monastery; and Etz Hayyim Synagogue, the sole reminder of Haniá’s pre-World War II Jewish community of about 350.

Book onto Insight Guides’ Along the Coast of Crete trip for the vacation of a lifetime.

The town’s three must-see indoor sights are the Museum of Asian Art, a collection housed (together with excellent changing exhibits) in the British-built Palace of Saints George and Michael; the Andivouniótissa (Byzantine) Museum in the Mourágia district, a medieval church crammed full of unusual icons of the 15th to the 18th centuries, many of them painted by refugee Cretan artists who came here after the fall of Venetian Crete in 1669; and the Archaeological Museum, where the star exhibit is the massive Gorgon pediment from an Artemis temple at Paleopoli. The more detailed pediment of a Dionysiac symposium, complete with the god, acolyte and lion, however, equals it.

The juxtaposed colonnades of this Doric temple on Aegina seem straight out of an M.C. Escher drawing; the piney hilltop site is everything you’d expect for an ancient sanctuary. The temple, in the northeast of Aegina, is the island’s main attraction and is exceptionally beautiful, commanding a splendid view of the gulf. Built around 490 BC in the Doric order, it is the only surviving Greek temple with a second row of small, superimposed columns in the interior of the sanctuary, and one of the most completely preserved.

A short distance below lies Agía Marína beach resort, now perking up after some very lean years, though there are much better tavernas – if not swimming – at quieter Pórtes, 8km (5 miles) to the south.

Santoríni’s whitewashed villages sit atop volcanic cliffs above midnight-blue caldera waters. It is an island shaped by geological turmoil, and one of the most dramatic in all of Greece. Sailing into the bay of Santoríni is one of Greece’s great experiences: broken pieces of an ancient volcano’s rim – Santoríni and its attendant islets – trace a multi-coloured circle around a deep submerged caldera which, before the cataclysmic eruption in about 1625 BC, was a hummocky volcanic plateau. The earthquakes, tsunami and rains of pumice that followed the eruption devastated much of the Aegean, and contributed to the end of Minoan civilization. The island’s long crescent, formed of solidified lava, seems at sunset still to reflect fire from the dormant volcano.

The sensual lines of Cycladic architecture, augmented here with anti-earthquake barrel-vaulting cemented with pozzolana (sandy volcanic ash), are doubly disarming on Santoríni, set against the smoky purple or rusty orange striations of weathered lava in the background. Thera is the island’s ancient name, and Thíra is the official one in modern times. Both Greeks and foreigners, however, prefer the medieval Santoríni, after Saint Irene, one of three sisters martyred by Diocletian in AD 304.

For a hassle-free holiday, with all the pestering details taken care of, book onto Insight Guides’ Historic and Mythological Cyclades Islands trip. 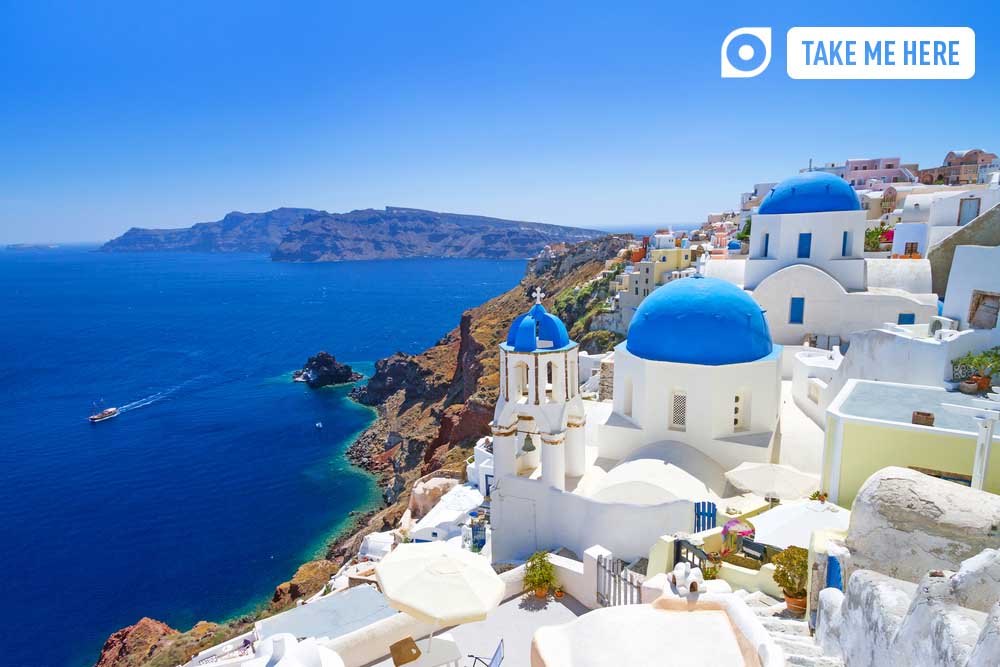 Founded in 1088, this labyrinthine monastery transcends the cruise-ship crowds besieging it with vivid frescoes, a rich treasury and unique architecture. A photogenic maze of interlinked courtyards, stairways, chapels and passageways, it occupies the site of an ancient Artemis temple. The Treasury houses the most impressive monastic collection in Greece outside Mount Athos. Among priceless icons and jewelry, the prize exhibit is the edict of Emperor Alexios Komnenos granting the island to Hristodoulos.

Over 1,000 meters (1,100yds) long and now open to visit along its full length, this tunnel bored through a mountain as part of an advanced water-supply system is among the top technological marvels of the ancient world. An aqueduct engineered by Eupalinos of Megara in the 6th century BC through the hillside northwest of town, the surveying was so good that two work crews, digging from either end, met with no vertical error and a horizontal one of less the 1 percent. Reopened in 2017 after long repairs, you can trace its entire length along the catwalk used to remove spoil from the water channel far below. Most people choose the 30-minute ‘second itinerary’, about halfway through the tunnel to the meeting point of the two crews. Wearing supplied helmets is mandatory, as you will bang your head on the low ceiling.

7. Sailing between the Ionian Islands

Sailing is a rewarding way of exploring the beautiful Greek Islands, whether in your own yacht, in a chartered boat or as part of a flotilla. Flotilla-sailing between the Ionian Islands is the best choice for novices; conditions are generally milder than in the open Aegean, but the scenery is every bit as gorgeous, and characterful anchorages are close together.

The islands of the Ionian Sea just west of Greece are dubbed the Eptánisa – ‘seven isles’. However, the seventh, Kythira, lies south of the Peloponnese and, while sharing history, culture and architecture, remains isolated from the other six islands.

Heavy rainfall makes the Ionians among the greenest of the Greek archipelagos. Olive groves, market gardens and vineyards are reminders that agriculture still plays a role in the economy. This same unsettled weather has ruined many a holiday: from mid-September until early June, storms can wash out beach outings without warning. But these squalls rarely last more than a few hours, and there’s usually a museum or tavern interior nearby to take shelter in. 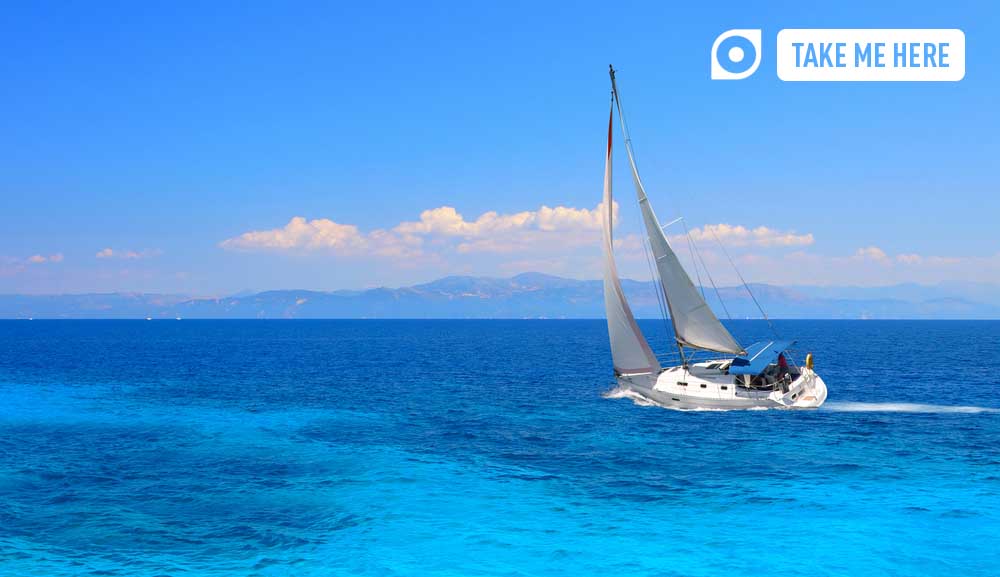 Improbably wedged into a cliff above Amorgós’s southeast coast, this monastery greatly impressed Le Corbusier on his 1911 visit. It is still the spiritual centre of the Cyclades, with a major festival held on 21 November each year. Newly married? Make the most of Agíou Ioánnou tou Theológou Monastery’s romance by booking with Insight Guides and selecting the Greek Island-Hopping Honeymoon trip.

The spectacular 11th-century Byzantine monastery is home to a revered icon of the Virgin from Palestine, as well as to three hospitable monks who treat visitors to a shot of rakómelo (spiced spirit) with loukoúmi, and a ground-floor treasury museum. The 20–21 November festival, despite being subject to dodgy weather, is attended by pilgrims from Athens and across the Cyclades. Below the monastery, Agía Anna and Kambí beaches are the most famous of several protected south-coast coves.

This island has more thermal springs than any other Greek island, thanks to its volcanic core; the Ottoman-era and domed Loutrá Géras on the eponymous gulf is the most user friendly.

Greece’s third-largest island, measuring 70 by 40km (43 by 25 miles) at its widest, Lésvos is the antithesis of the nisáki (cute little islet). Between far-flung villages lie 11 million olive trees that produce around 45,000 tonnes of oil every year. Shipbuilding, fish-curing, ouzo-distilling and livestock-rearing remain important, but no enterprise rivals the olive, especially since it complements the second industry – tourism.

Lésvos was a preferred Roman holiday spot, what with its thick southern forests, idyllic orchards and hot springs – the island’s thermal baths and spa facilities are still a considerable attraction. There are four restored medieval spas to choose from.

If Kefaloniá has become, somewhat reluctantly, ‘Captain Corelli’s Island’, lushly wooded Skópelos has enthusiastically embraced the sobriquet of 'The Island of Mamma Mia!', partly shot here in 2007, with tour boats offered to filmic locales. Not that the island was any less photogenic or alluring before then; its beaches are consistently underrated, and unlike Skiáthos, it has not suffered so many forest fires.

Skópelos town, exquisitely preserved, seems to exist in a 1980s time warp, but in the best sense: old-fashioned shops, atmospheric arcades and a generous sprinkling of churches. Its exceptionally fine vernacular houses are arrayed around a harbor lined with cafés and tavernas under mulberry trees. Slate roofs, wooden balconies, idiosyncratic shops and flagstone streets give Hóra a serenity and dignity rarely found in Skiáthos. The only specific attractions are the 18th-century Vrakatsa Mansion, the home of a leading family donated to the community by the last of the line in 2001, kept much as it was when they lived there; and the Folklore Museum, three floors detailing local costumes and crafts such as the vanished weaving tradition. 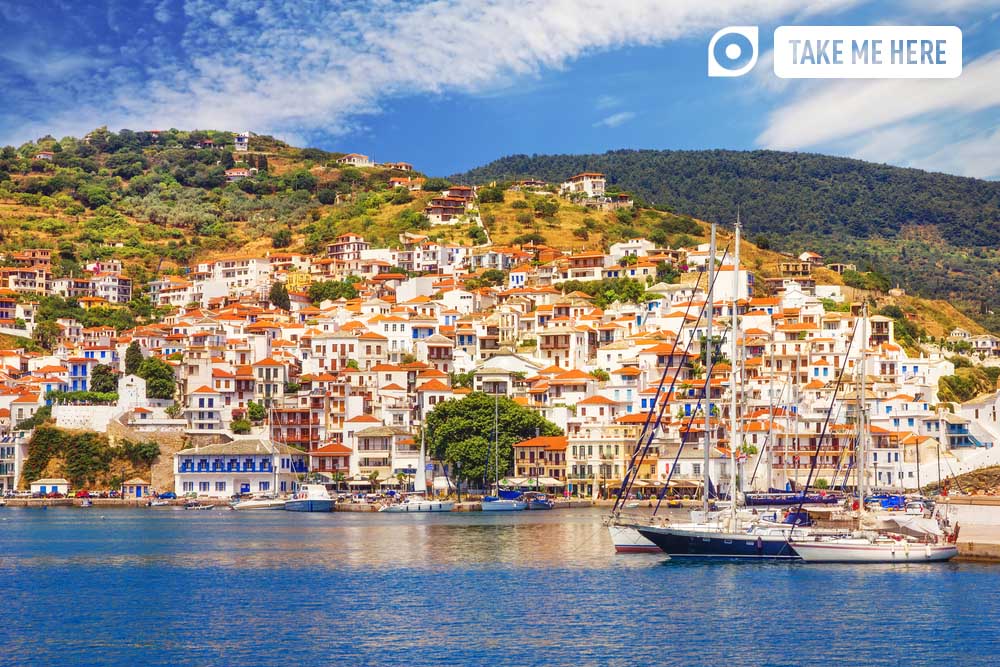 Insight Guides can help you plan and book incredible trips in Greece. Simply get in touch to let us know your ideas for the trip and when you would like to travel. Our local experts will then create a personalized itinerary based on your preferences which you can amend until you're totally happy with every detail before booking. Our existing itineraries can offer inspiration, and keep in mind that they can all be fully tailored to meet your specific needs.