The Vatican is quintessentially Roman. With over 2,000 years of history, no other place embodies so much politics, history, religion and art all rolled into one relatively small space. Each century has visibly superimposed itself upon the last, forming a great historic layer cake. Explore it with this perfect tour... 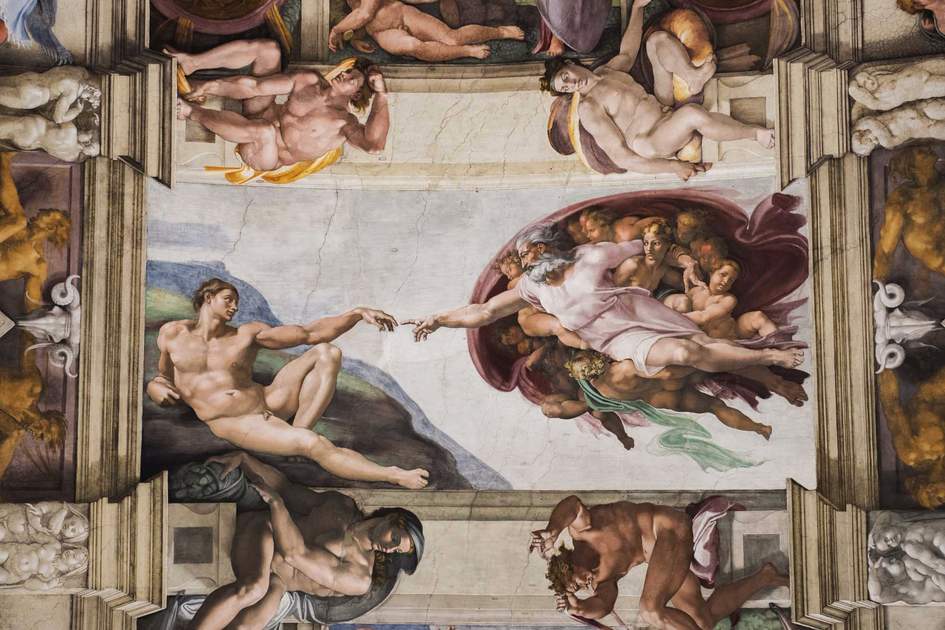 Detail of the Universal Judgement inside the Sistine Chapel in Vatican City. Photo: Shutterstock
PrevNext

The start of this route is the huge Piazza San Pietro. There is time to look around the Basilica of St Peter’s, climb the dome, and see Michelangelo’s Pietà before walking around the fortified walls of the Vatican Museums and the Sistine Chapel. The Vatican is one of the most significant tourist sights in the world, with close to 40 million visitors each year. Its role as a political and religious power is unique, and with fewer than 900 inhabitants it is the world’s smallest independent state. Vatican City was granted political independence from Italy in 1929, and the Pope is head of both government and state. The Vatican has its own postal system, currency, passport, licence plate, flag and police.

Points to note: The Vatican can be draining with the long queues at security. Pace yourself and bring a bottle of water. Going to the museums in the late morning or early afternoon can reduce the wait. Be sure to dress appropriately (no shorts, sleeveless tops or skirts above the knee).

Vatican City sits on a large hill. The name comes from the Latin, Mons Vaticanus (Vatican Mount) and predates Christianity. The complex of buildings was constructed over a first-century ‘circus’ built by the Emperor Caligula. The area was expanded by the Emperor Nero, who used it for games and for the persecution of Christians and other non-pagans. It was under Nero that St Peter was martyred in the circus complex. He was buried nearby on the Vatican Hill, and it was this tomb that became the centre of Christianity.

In 326 the Emperor Constantine built the first Christian temple above St Peter’s tomb. This became the heart of the Catholic church, and over the centuries the area around the basilica was expanded. The original building was torn down and built anew from the papacy of Julius II in 1506 onwards. What we now call the Vatican is primarily a Renaissance plan.

The giant elliptical-shaped piazza was added in 1656 during the final phase of decoration of the new basilica. Bernini was commissioned by Pope Alexander VII to create an architectural space that reflected the role of the church. The floor plan of the piazza is shaped like a giant keyhole, reinforcing the role of St Peter as the gatekeeper to heaven.

The focal point of the piazza is the Egyptian obelisk brought from Alexandria in 37 AD under Emperor Caligula. The fountains are by Maderno and della Fontana, while above Bernini’s colonnade are over 200 colossal statues depicting minor saints.

Under the north colonnade is the security checkpoint to St Peter’s Basilica. There is often a long queue here but it moves quite quickly. A second checkpoint near the steps is for clothing control.

Construction of the Basilica di San Pietro (Piazza San Pietro; 7am–7pm, until 6.30pm in winter) was a serious undertaking, with multiple architects, including Bramante, Raphael, Michelangelo (who designed the cupola, or dome) and Maderno, involved. After 120 years, the building was consecrated in 1626. 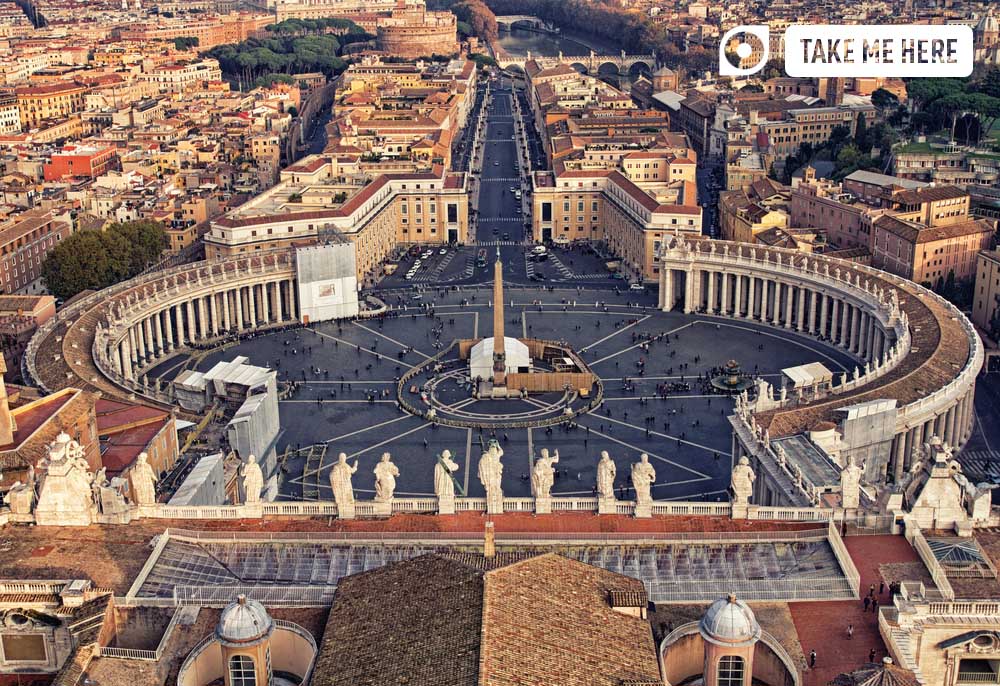 In the right chapel, protected by thick glass, is the statue of the Pietà by Michelangelo. This touching depiction of the death of Christ was completed in 1499 when the artist was only 25.

Down the central nave, past the side chapels, is a lovely 13th-century statue of St Peter by Arnolfo di Cambio. This is the official representation of St Peter, and is one of the few works of art that remains from the older structure. His foot has been lovingly kissed and petted for centuries.

At the centre is the massive bronze Baldacchino hovering over the Papal altar, and marking the tomb of St Peter. This emblematic work by Bernini was commissioned by Pope Urban VIII in 1624, and is the largest freestanding bronze structure in the world. It is dwarfed under Michelangelo’s stunning cupola. Just beyond the altar are more works by Bernini, the Throne of St Peter in Glory and window of the Holy Spirit. Past the apse, along the left side over a door, is the sombre monument to Pope Alexander VII. This late work by Bernini shows a bronze skeleton as the allegory of death, holding an empty hourglass.

There are separate entrances for the additional sites within St Peter’s. Entrances to the Tesoro e Sacrestia (Treasury and Sacristy; 8am–7pm, until 6.15pm in winter) are found on the south wall of the nave; the lower-level grottoes (8am–6pm, until 5.30pm in winter) are situated on the north side of the basilica, accessed from the front portico.

Another rewarding walk is the climb up to the cupola (8am–6pm, until 5pm in winter). Look for the entrance as it is often rerouted for crowd control. There is a lift part way, and then another 320 steps to the top of the spectacular lantern at the top of the dome.

A break is recommended before continuing to the Vatican Museums, which are about a 15-minute walk around the outside of the Vatican walls. Just a few streets off the Via Porta Angelica the dining options become slightly more tolerable and less of an obvious tourist trap.

If time is short, the Vatican Museums Café is an option, or you could try Tre Pupazzi on the Borgo Pio. Borgo Pio 92 is good for fast lunches; alternatively, grab an ice cream at the Gelateria dei Gracchi, which is a short walk away in Prati. 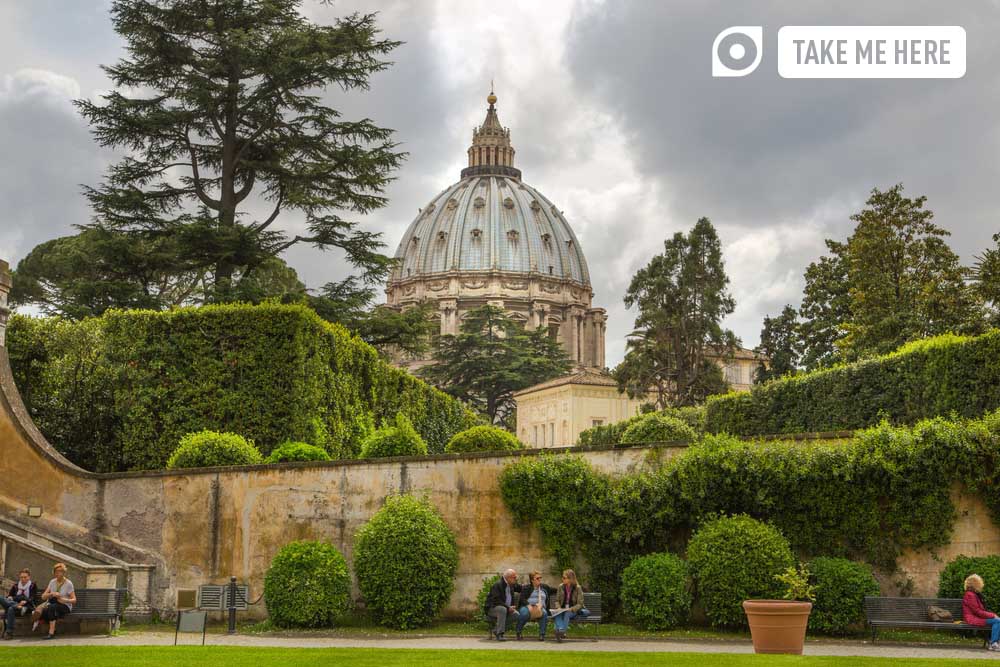 Continue along the walls to the entrance of the Musei Vaticani (Viale Vaticano 100; Mon–Sat 9am–6pm, last entry 4pm). At the entry is another security checkpoint, and ticketing is located on the first floor. Maps with suggested routes are available at the entrance desk to help navigate the nearly 30 separate collections housed within 1,400 rooms. It is so vast that it is impossible to see all of the sections in one visit, so choose your favourite route. All of the itineraries take visitors through the Sistine Chapel.

The idea of the papal collection dates to the early 1500s with Pope Julius II, who started by adding Classical statuary to the courtyard of the Belvedere Palace. In the same years he commissioned Raphael to redecorate his private apartments, Bramante to start construction of the new St Peter’s, and Michelangelo to fresco the ceiling of the Sistine Chapel, setting a precedent for future popes. The Vatican Museums were opened to the public in the 18th century.

On entering there is a choice of directions to follow. To the right, facing west past the terrace, is the chronologically arranged Pinacoteca (Picture Gallery). Of note is the Stefaneschi Triptych dating from 1298 by Giotto (better known for his frescoes in Florence). The altarpiece was commissioned for the main altar of the old Constantinian Basilica of St Peter’s. Further along are some lovely fresco fragments by Melozzo da Forlì, followed by three stunning altarpieces by Raphael. The two early works, The Coronation of the Virgin of 1503 and the Madonna of Foligno of 1511, are contrasted with the massive central panel of The Transfiguration of 1520. This was his last project and it clearly shows the influence of Michelangelo.

Successive rooms display an unfinished work by Leonardo da Vinci, some Titians and large paintings on canvas from the 1600s. Particularly interesting are Guido Reni’s Crucifixion of St Peter and Caravaggio’s unconventional Entombment.

Leaving the Pinacoteca, retrace your steps east to the central Cortile della Pigna (Pinecone Court). This open courtyard is named after the colossal bronze pinecone, displayed in a niche. The grand scale of the new St Peter’s dwarfed even this massive drinking fountain, and it was moved to its present location in 1608.

At the far edge is the corridor of the Museo Chiaramonti. The static display, with original numbering system, was first laid out by Antonio Canova and shows statues of emperors and gods, and portrait busts. Further down the gallery is the entrance to the Braccio Nuovo section, displaying the famous Augustus of Prima Porta. The staircase leads into both the Egyptian Museum and Belvedere Court.

Bramante’s magnificent Cortile del Belvedere (Belvedere Court) and the Museo Pio-Clementino house some of the world’s most famous Classical sculptures. This is the nucleus of Julius II’s collections.

Both the exquisitely proportioned Apollo Belvedere, and the dynamic Laocoön figure group, are showcased in side niches of the Octagonal Court. Further along is the Hellenistic Belvedere Torso, which hugely influenced Michelangelo’s work. At the centre of the Sala Rotunda (round room) is a porphyry basin from the Emperor Nero’s house.

Following the stairs and the flow of traffic takes you through a series of decorated corridors. The Gallery of the Candelabra is full of ancient Roman sculpture, which connects to the darkened Gallery of the Tapestries. The tapestries at the left side were made under the Flemish master weaver, Pieter Van Aelst, from incredible full-scale cartoons sent from Raphael’s studio.

Through the doors is the lengthy Corridor of Maps commissioned by Pope Gregory XIII in 1580, and based on the work of cartographer Ignazio Danti. The route continues through several decorative rooms that lead into the apartments of Julius II.

This series of rooms was remodelled by Raphael for the private use of Pope Julius II. They include the Room of Constantine and the Expulsion of Heliodorius from the Temple. The masterpiece is the reading room, called the Stanza della Segnatura (Room of the Signature). Raphael’s frescoes carry out a philosophical dialogue across the space. The Disputation of the Holy Sacrament, depicting a philosophical discussion of the spiritual truths, is juxtaposed with the School of Athens, a discussion of the tangible and intangible nature of philosophy. The central figures show Plato (left) with Leonardo da Vinci’s face, and Aristotle (right) with hand extended. 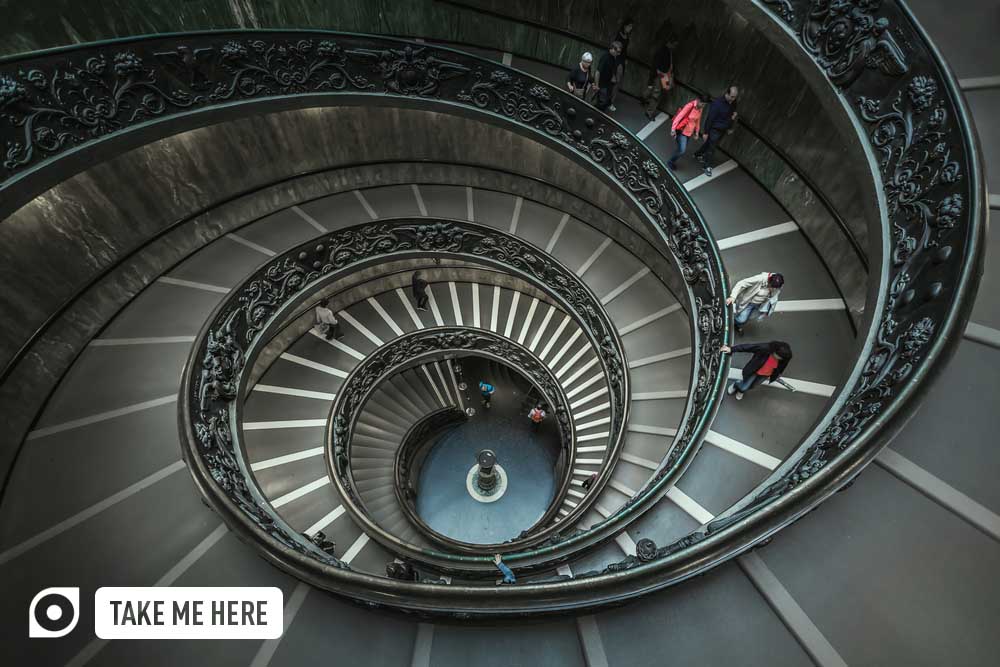 More is probably written about the decoration of the Capella Sistina than any other building in the world. The fortress-like chapel was started in 1475 under Pope Sixtus IV della Rovere, and great Renaissance painters, including Sandro Botticelli, Domenico Ghirlandaio and Pietro Perugino, executed the first phase of decoration. These wall frescoes illustrate scenes from the Life of Moses and Life of Christ. The ceiling decoration was commissioned in 1508 by Pope Julius II della Rovere (nephew of Sixtus IV). Michelangelo was given the task of creating a monumental image covering an area of 500 sq m (5,400 sq ft). The nine scenes from Genesis represent the Separation of Light from Dark, Creation of the Sun and Moon, Separation of the Waters, Creation of Adam, Creation of Eve, Expulsion from Eden, Sacrifice of Noah, The Great Flood and Deluge and Drunkenness of Noah.

Nearly 30 years later, Michelangelo was again commissioned to create the fresco on the altar wall for Pope Clement VII de Medici. The tumultuous portrayal of the Last Judgement has been considered both a supreme masterpiece and an affront to the church.

The exit from the Sistine Chapel generally passes by the entrance to the Vatican Library (closed to the public). The long corridor will bring you to the main exit, down the beautiful spiral ramp designed by Giuseppe Momo in 1932. For a meal, try Il Bar Sotto Il Mare, a few minutes’ walk north from the museum entrance.

Ready to take a trip to Rome?

If you are planning a trip to Italy, Insight Guides can help with the planning, organising and booking of your trip. Simply contact our local expert with details of the length of your trip, budget and places you would like to visit and they will plan your personalised itinerary. For inspiration browse Insight Guides ready-made Italy trips.