10 of the best Chinatowns around the world 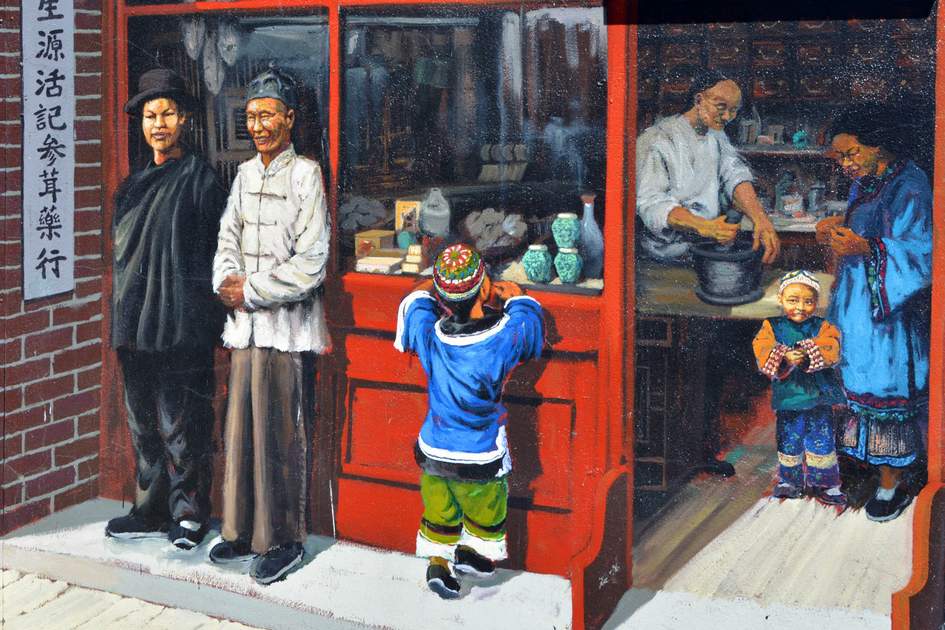 Chinatown: A mural in Vancouver telling the story of the local Chinese community.

When celebrating Chinese New Year, there's no better place to be than in Chinatown, unless you are lucky enough to be in China itself! Here, in no particular order, are our favourite Chinatowns across the globe. Which have you been to?

Cramped and colourful, San Francisco's Chinatown covers 24 square blocks and houses the second biggest Chinese community outside Asia (New York's is first). There are exotic emporia, temples, tea houses, restaurants, Chinese banks, schools, law offices, bookstores, laundries and factories recalling the sweatshops of earlier times. In order to enter through the front door, approach Chinatown from the Union Square area or the Financial District. Grant Avenue is the prime tourist promenade of Chinatown, but be sure to veer off to find a more authentic experience on Broadway and Stockton Street and the tiny alleyways in between.

Here, you can visit the Golden Gate Fortune Cookie Company, from where those typically American-Chinese sweets originate. You can watch the deft hands of the operators folding moist cookies around slips of paper enigmatically foretelling the fate of future customers at Chinese restaurants around the world. 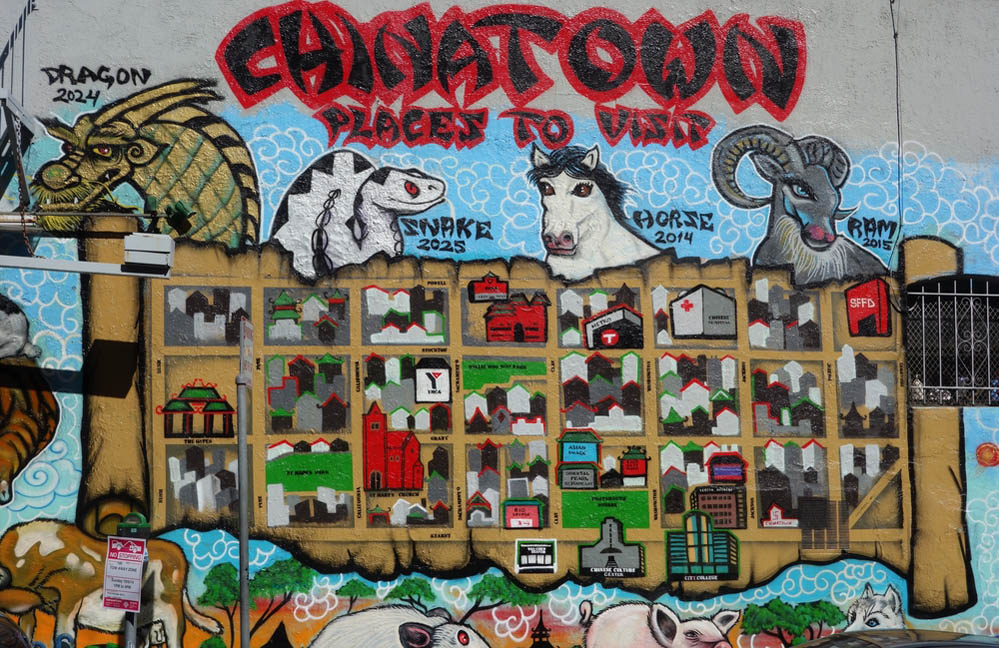 One of the oldest areas of the city, Bangkok's Chinatown retains narrow lanes of cluttered markets not much changed since its creation. Pungent food stalls, ornate Chinese shrines: loud, boisterous and frenzied, this is Bangkok at its visceral best. The beginnings of a real Chinatown came when King Taksin encouraged Teochew labourers and merchants to relocate from southern China in 1767, when he chose Thonburi as his new capital.

Chinatown's boundaries now stretch along the Chao Phraya, loosely from River City shopping complex to the edge of Pahurat Market. Chinatown has been hugely influential in Bangkok life since the beginning of the city. It is the centre of the gold trade and has a 200-year-old market, Taoist temples, and a 5-ton solid-gold Buddha at Wat Traimit. 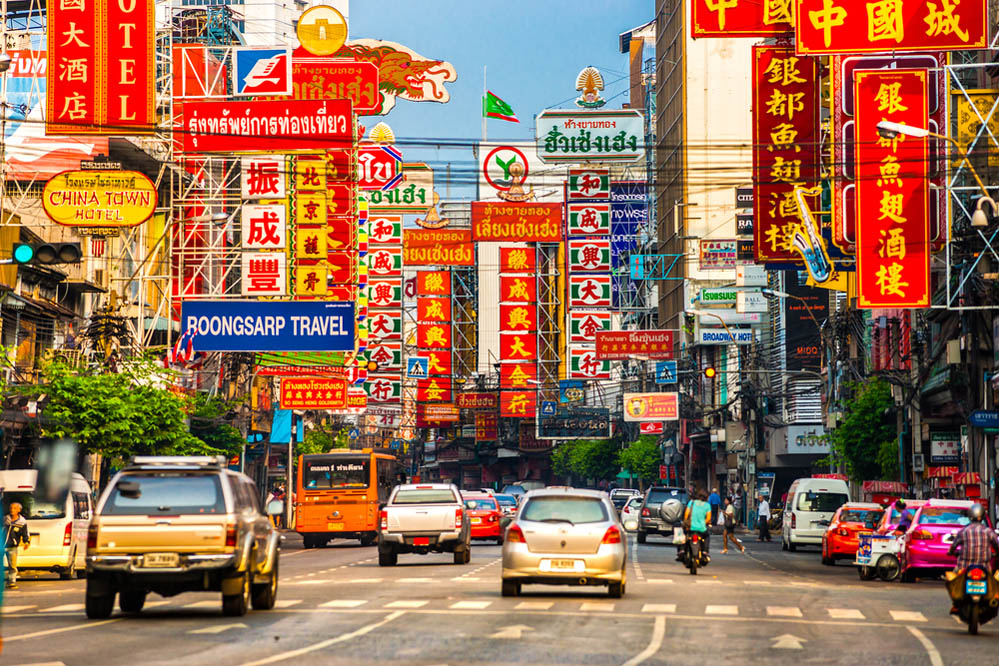 Toronto's central Chinatown runs west along Dundas Street and north on Spadina as far as College Street. There are several Chinatowns in the city, but this is the largest and best known since it has loads of stores and restaurants here that remain open until late at night.

It sprouted up on these streets in the 1960s after the original Chinatown near Queen and Bay was razed to make way for the new City Hall. Here, you'll find overflowing fruit and vegetable stands, Chinese herbalists and grocery stores. 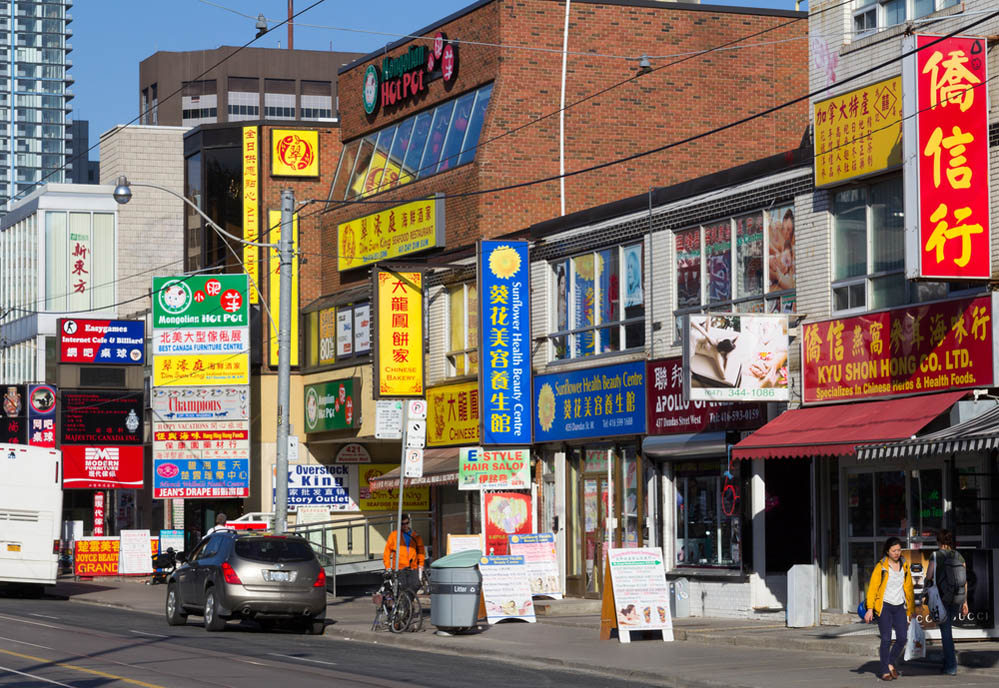 Gerrard Street, which lies between Leicester Square and Old Compton Street, is the main thoroughfare of London's Chinatown. Chinese immigrants, mainly Cantonese from Hong Kong, started to settle in the area during the 1950s. Street names are subtitled in Chinese, and the tops of telephone boxes resemble mini pagodas.

Eating out is the main attraction here, but there are also herbal and medicine shops to explore. On Sundays, a family outing day for the city's Chinese, there is a Chinese food market. Chinese New Year is celebrated in style, with massive papier-mache lions dancing through the streets. 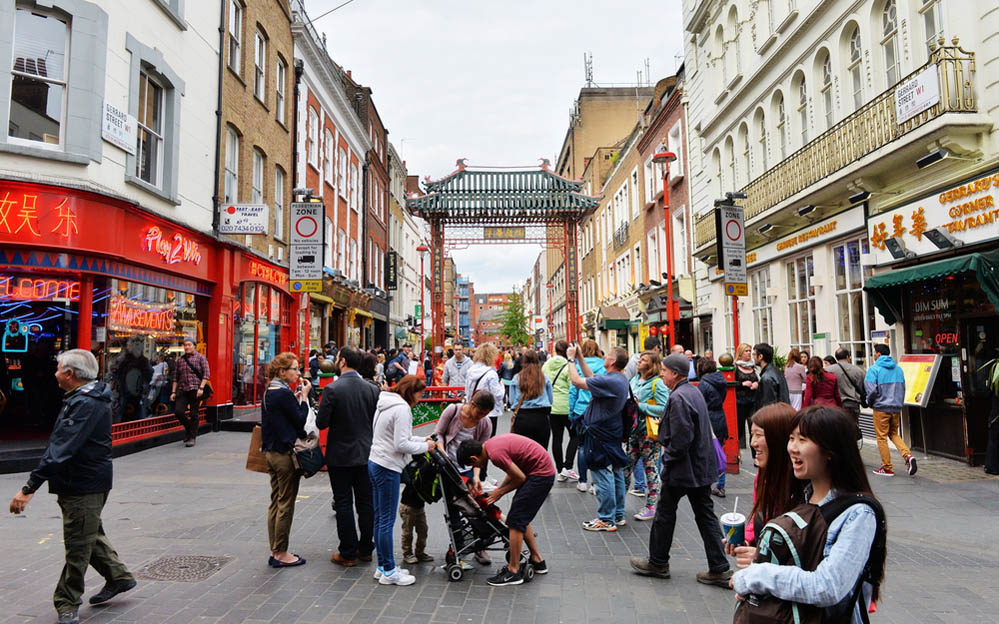 Manila, in the Philippines, has one of the world's major overseas Chinese populations, estimated at more than one million - and its Chinatown is the oldest in the world, established in 1594. It displays a mix of influences; the traditional Chinese apothecary selling dried sea horses and ginseng huddles close to a modern bank outfitted with automatic doors and shotgun-toting guards. Chinese restaurants operate next to Italian furniture shops, while Chinese immigrants hawk cheap wares on the street.

In traditional Chinese style, certain streets are known for selling a particular item. Ongpin Street is the king of gold and jade jewellery; Nueva Street vendors sell mainly office supplies. Head to Pinpin Street for furniture, and tiny Carvajal Street for the busy wet market and lunchtime dim sum with the locals. 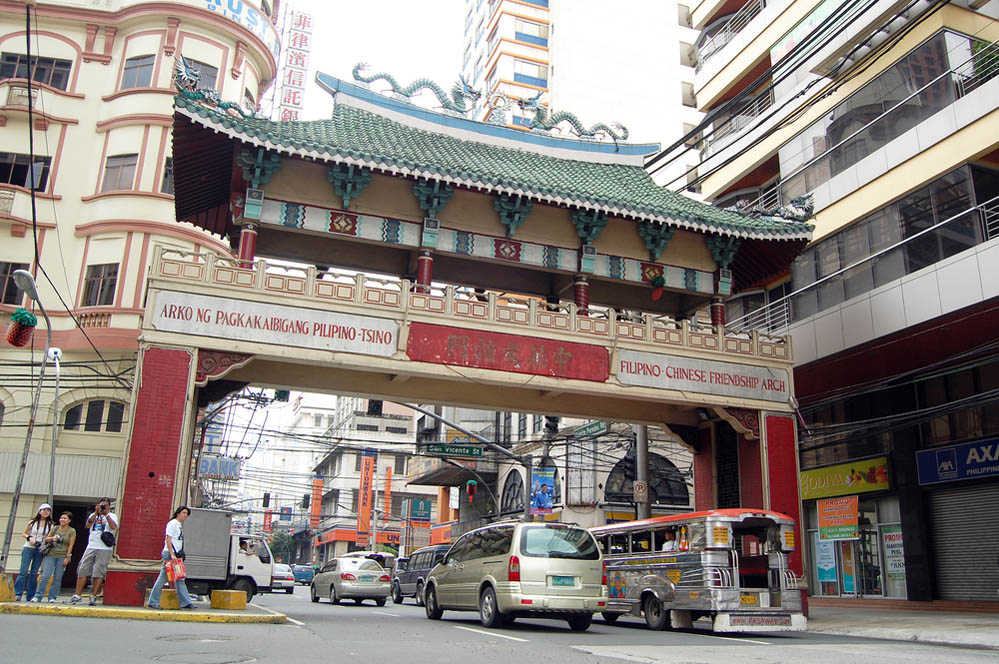 It may seem odd that Singapore, with a predominantly Chinese population, has a Chinatown. But this can be traced to Raffles' original town plan, which assigned the different races to various districts. Today's Chinatown is hemmed in by soaring high-rises, but vestiges of the traditional can still be seen.

Conservation shophouses are where you'll find decades-old businesses, which stand shoulder to shoulder with even older places of worship. Medical halls dispense traditional herbal cures and families flock to restaurants for dim sum at the weekends. Exotic sights and smells still dominate. There are rare Asian ingredients and frogs to be skinned in the fresh produce market. At certain times of the year, the streets are filled with the pungent aroma of durians.

One of the largest Chinese-American settlements in America, New York's Chinatown got its start in the 1870s, when Chinese railroad workers drifted east from California in the wake of anti-Asian sentiment.

Once squeezed into a three-block area, today's Chinatown encompasses around 40 blocks, swinging around Little Italy to Houston Street. Although Chinatown is now a little faded in some areas, half of its appeal is in negotiating the vendors, tourists and residents that fill its busy streets. 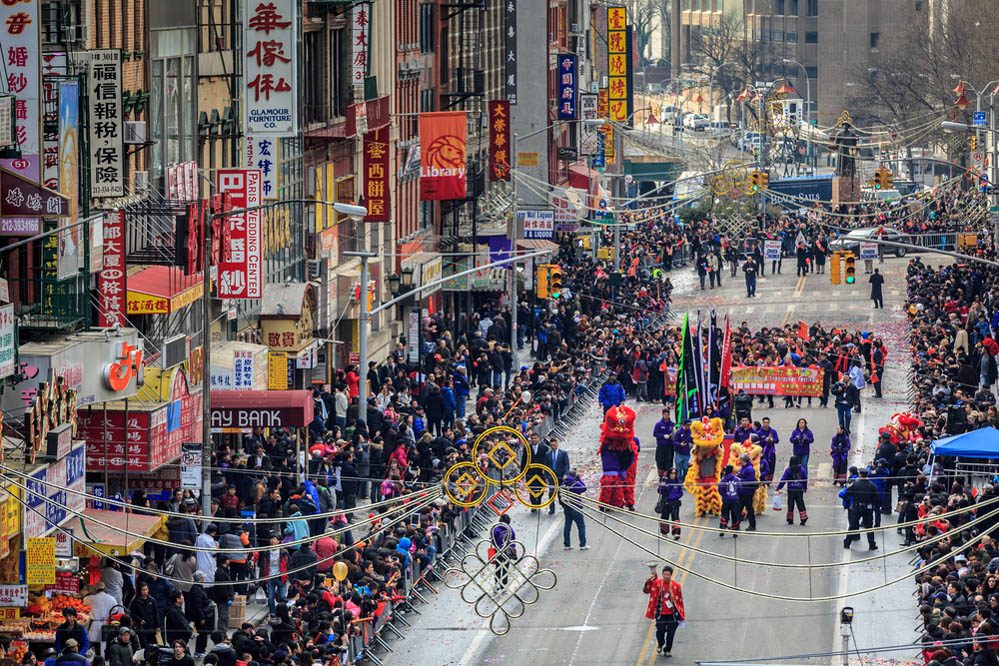 Paris's Chinatown is bordered by Avenue d'Italie and Avenue d'Ivry. The area is a mini-city of skyscrapers and streets lined with Thai groceries, Vietnamese noodle bars and Chinese tearooms. 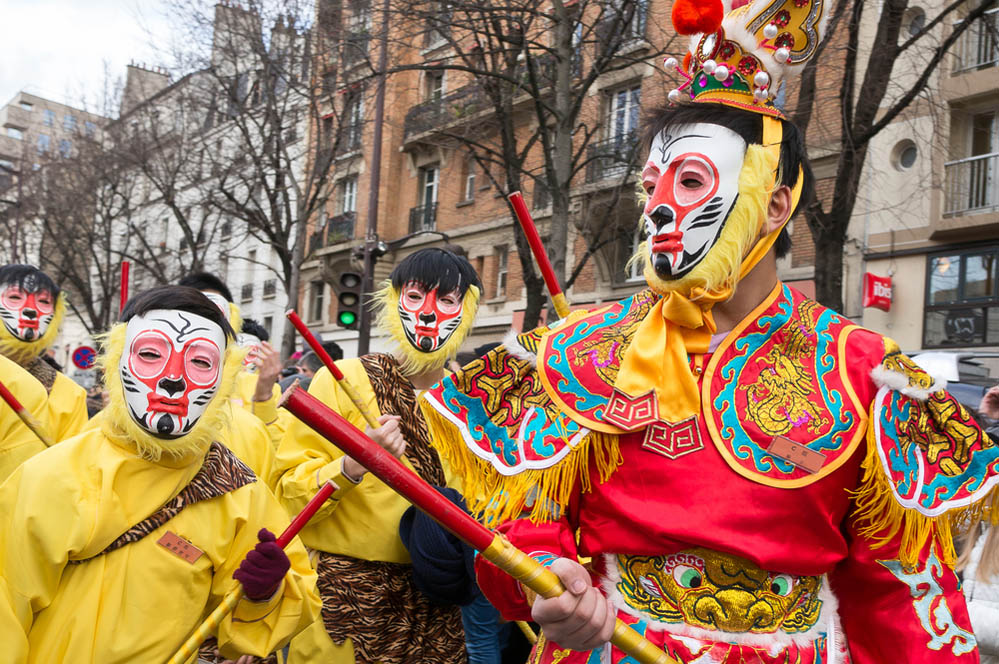 Vancouver's compact Chinatown, dating from 1885, is the biggest in Canada and the third largest in North America (after San Francisco and New York). It stretches for several blocks east from Main Street and its centre is a 10- to 15-minute walk from downtown. On Columbia Street is the Chinese Cultural Centre, which provides a good introduction to the role of the Chinese in western Canada's history. From esoteric Chinese herbs and spices, to jade and silks, there are numerous specialist shops along East Pender and Keefer streets to fascinate even the most shopping-averse. Vancouver's Chinatown is also the location of the world's narrowest commercial building - the Sam Kee Building. The property is just 1.5 metres deep.

Providing a sanctuary of nature within the bustling city, the Dr Sun Yat-sen Park and Classical Chinese Garden was built by 52 artisans who came over from China in the 1980s. It is thought to be the first full-scale classical Chinese garden built outside China. 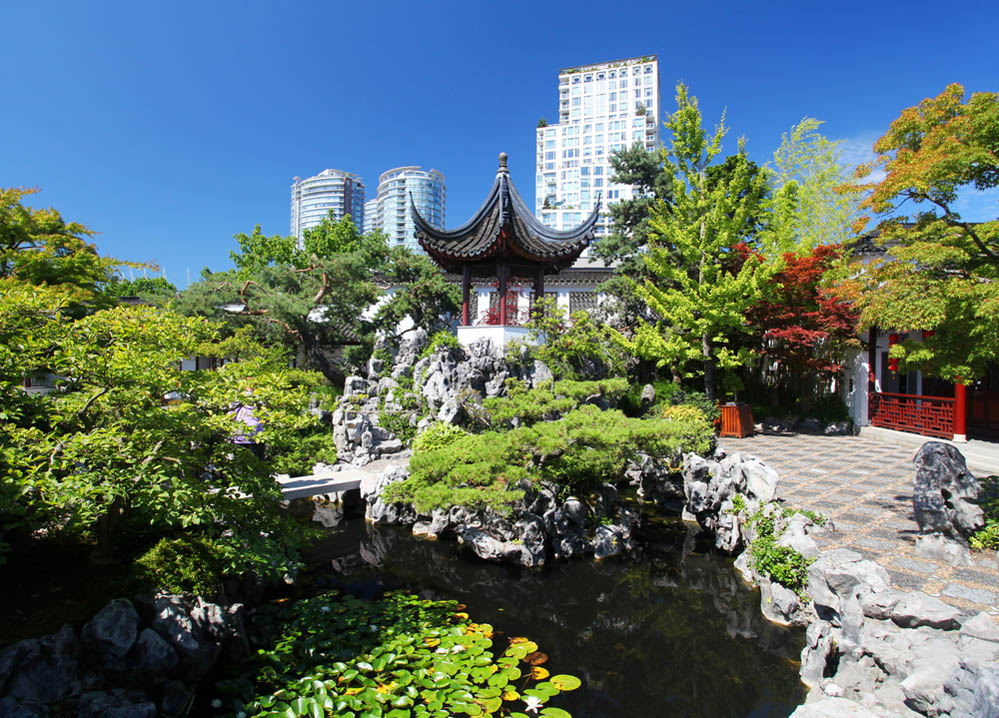 Cantonese-speaking Chinese immigrants arrived inMelbourne in great numbers during the 1850s, hopeful of making fortunes in the colony they described as "New Gold Mountain." They established an area where they could eat, gamble and smoke opium with their fellow countrymen on Little Bourke Street. The stretch between Swanston and Springs streets is frantically busy on Sundays, when a swathe of restaurants serve yum cha (dim sum). Aside from food, there are also several cool bars in Chinatown that are packed cheek by jowl on weekends.

Those keen to find out more about the history of the Chinese in Melbourne can pop into the Chinese Museum on Cohen Place. 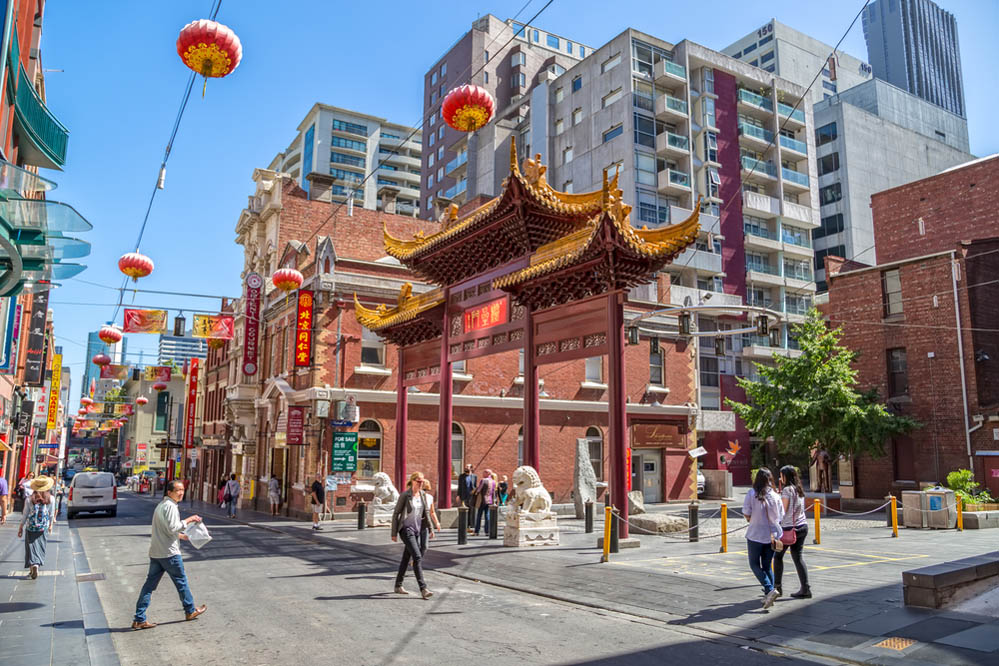 Book a trip: The Best of China