We all love Chinese food, but there's much more to China's cuisine than what we usually taste in the West. Read on to learn about what to explore and enjoy on China's brimming dining tables. Chopsticks at the ready! 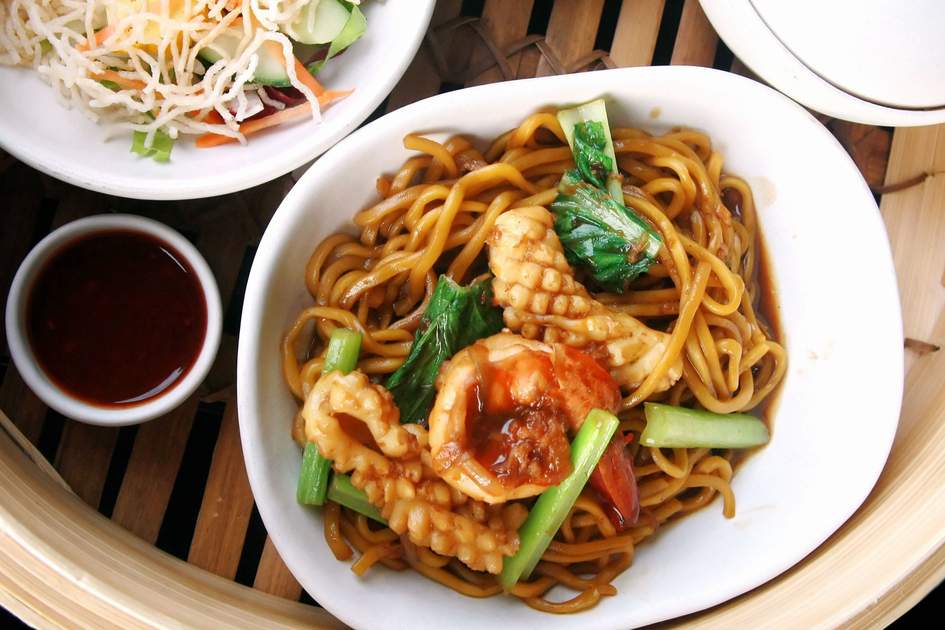 Almost every country in the world now has Chinese restaurants. But the authenticity of Chinese food suffers greatly when essential ingredients are hard to come by and the chef compromises with locally sourced substitutes. The most authentic Chinese food remains in China.

Taste a range of Chinese food and see all the major sights on our trip, The Best of China.

While Europeans were still dining on porridge and gnawing on bones, the art of good cooking was becoming an important part of China’s cultural heritage. French haute cuisine competes with it for subtlety and sophistication, although the Chinese have been gourmets a couple of thousand years longer. It’s no surprise, then, that Chinese food spans a vast variety of dishes using a wide choice of ingredients presented with sensitivity and flair.

Hard times and desperate hunger inspired the Chinese to make the most of foods others might have deemed inedible, including snakes, certain fish, and the lining gathered from swifts’ nests. Large animals that require pasture lands – cows and sheep, for example – are not as common as poultry and pigs. Without doubt, pork is the most popular meat, and when a menu doesn’t specify which meat is used in a particular dish, it’s usually pork. In addition, both freshwater and saltwater fish are highly prized. 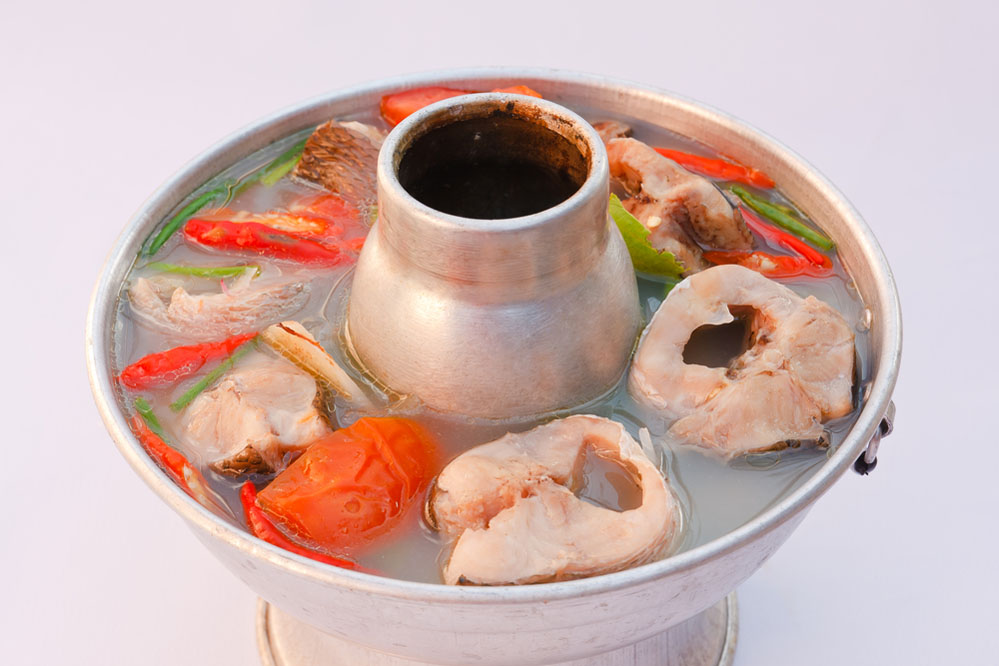 The range of vegetables cultivated in China is vast, particularly in the warmer south, and includes exotic delights such as a huge range of leafy greens, bamboo shoots, water chestnuts, taro and lotus root.

The most common method of cooking is stir-frying in a wok over a very high heat. Not only does this save fuel, but it results in both crisp texture and maximum vitamin retention. Deep-frying, steaming and braising are also popular, but slowly roasted or baked meats are not, and are usually produced only in restaurant kitchens.

Few Chinese dishes feature any one ingredient exclusively. The blending of ingredients and balance of seasoning is important; common seasonings are soy sauce, ginger, garlic, vinegar, sesame oil, soybean paste and spring onions. The Chinese revel in culinary contrasts: bitter and sweet, crunchy and tender, the yellow of the pineapple and the red of the pepper. 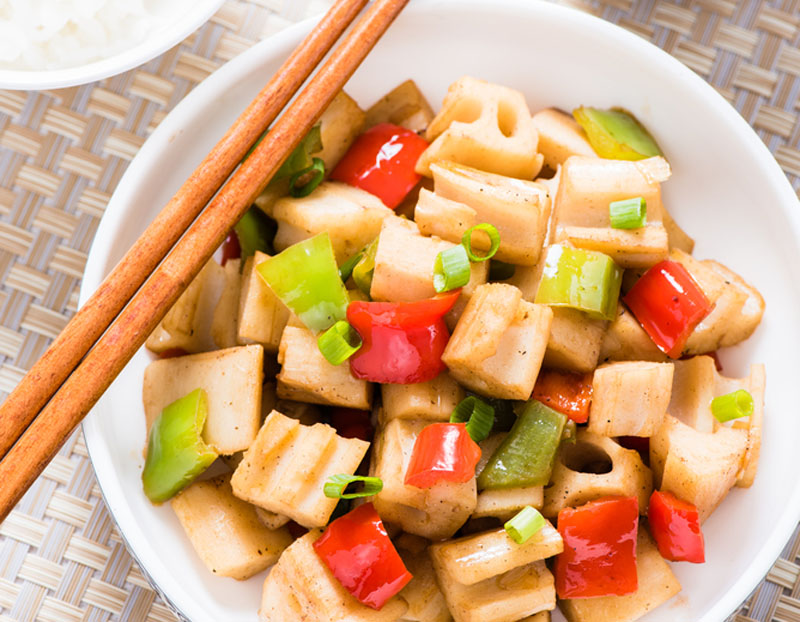 Profound regional variations developed in Chinese cooking as some ingredients were readily available in one area and not another: tastes, like the climate, differ from place to place.

Most Chinese restaurants overseas feature Cantonese food because it was people from the southern Guangdong province ("Canton") who emigrated widely, opened restaurants and introduced new tastes. Cantonese chefs are renowned for a willingness to incorporate foreign ingredients. They make abundant use of fruit and many types of vegetables, as well as seafood such as prawn, abalone, squid and crab. Steaming and stir-frying methods capture the natural flavour of Cantonese food. Look for steamed dumplings filled with meat or shrimp, deep-fried spring rolls and, of course, sweet-and-sour pork or prawns. Steamed rice is the usual accompaniment. 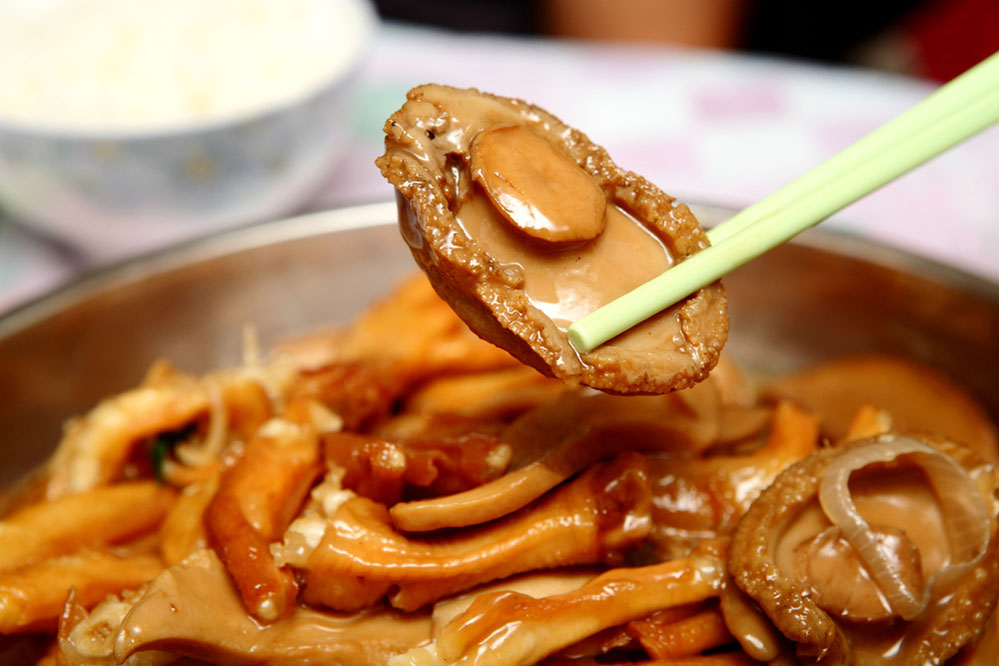 Wheat, not rice, is the staple in the north of China, where meals involve noodles or steamed bread or dumplings. Most northern cuisine stems from Shandong province. Beijing is the place to try Mandarin fish and Peking duck. Every day, Beijing restaurants turn out thousands of roasted, crispy-skinned ducks. Diners wrap pieces of skin and meat, sprinkled with green onions and anointed with a sweet bean sauce, in the thinnest of pancakes. Tour Beijing and discover the culinary delights on Insight Guides' Along the Silk Road trip before journeying along the ancient trade route. 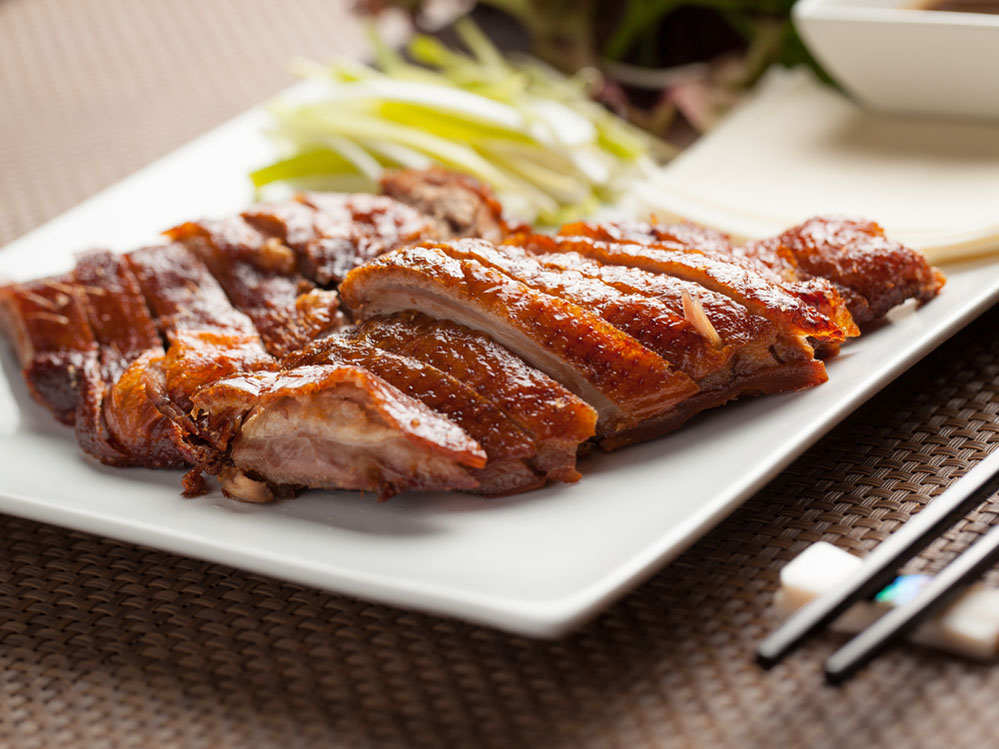 In Shanghai, chefs deftly fuse contrasting flavours: sweet or salty, plus hints of garlic or vinegar. Meats are often marinated, then braised at length in soy sauce, wine and sugar. However, Shanghai is best known for its seafood, with such dishes as steamed freshwater crab, honey-fried eel, braised yellowfish and sautéed shrimp (prawns). Nearby Hangzhou has a subtle novelty, shrimp in tea sauce, permeated with the flavour of tea. Visit Shanghai on Insight Guides' China's Old Water towns trip.

Sichuan province is the source of the peppery Szechuan recipes, which are more complicated than the first fiery taste would indicate. They combine many elements in unlikely coexistence: bitter, sweet, fruity, tart and sour. Even beancurd, which many tourists consider bland, takes on real character in the hands of cooks in Chengdu or Chongqing. But not everything on the Sichuan menu is hot; for a bit of relief, try sautéed shredded pork with spring onions and soybeans. Try these fiery delights and see what else the Sichuan province has to offer on Insight Guides' Sichuan Specialities: Chengdu, Temples and Pandas trip. 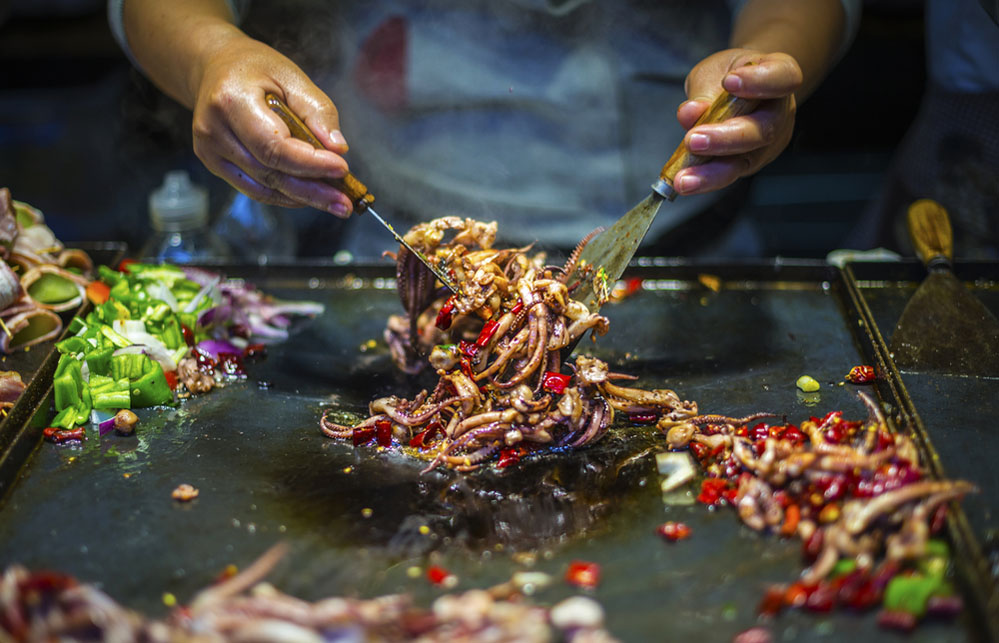 Neighbouring Hunan province also revels in the invigorating possibilities of the chilli pepper. But dishes here turn out less oily than in their Sichuan counterparts. The gourmets rave about Hunan’s chilli-smoked pork or chicken. Another typical Hunan dish is a whole steamed fish topped with chilli peppers and crunchy beans.

Wherever you travel in China, look for the local specialities: roast lamb and pilaf rice in far-west Xinjiang, great hunks of mutton in Inner Mongolia, Yunnan’s delicately smoked ham served in the thinnest slices, and sweet-and-sour fish along the Yangzi.

In the northeast, Jilin province is famous for stewed chicken with ginseng. Neighbouring Heilongjiang province offers boiling hotpots into which lamb, beef or tofu is dipped. Chefs in Shanxi blend flour noodles with meats, greens and tomatoes for spaghetti-like dishes. 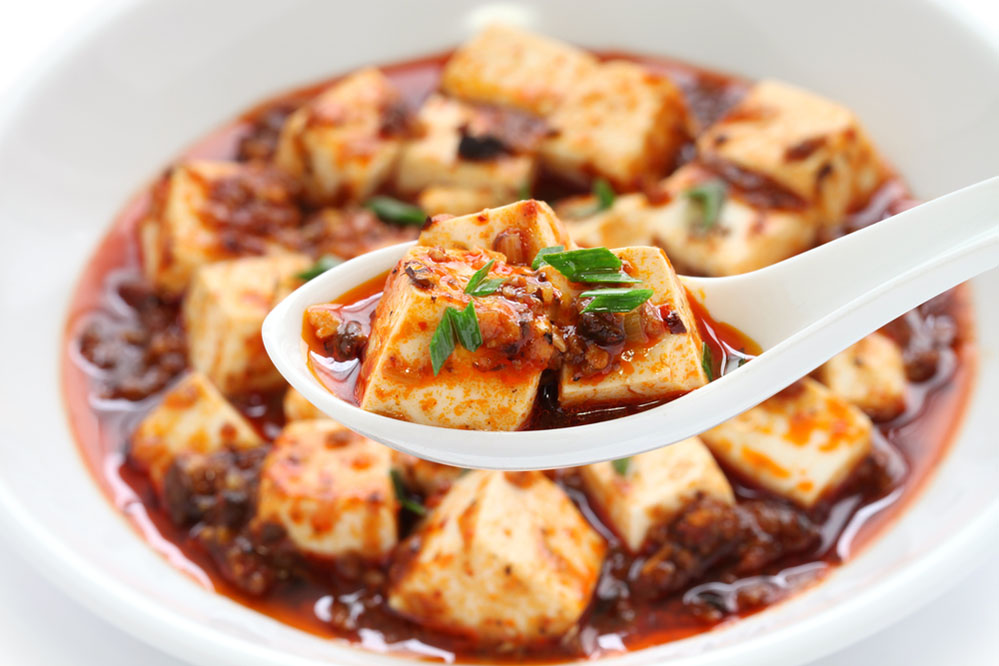 A word of warning

If you see "fragrant meat" on the menu, be aware that this is a euphemism for dog meat, a favourite of diners in Guangdong and in ethnic Korean regions of the northeast. 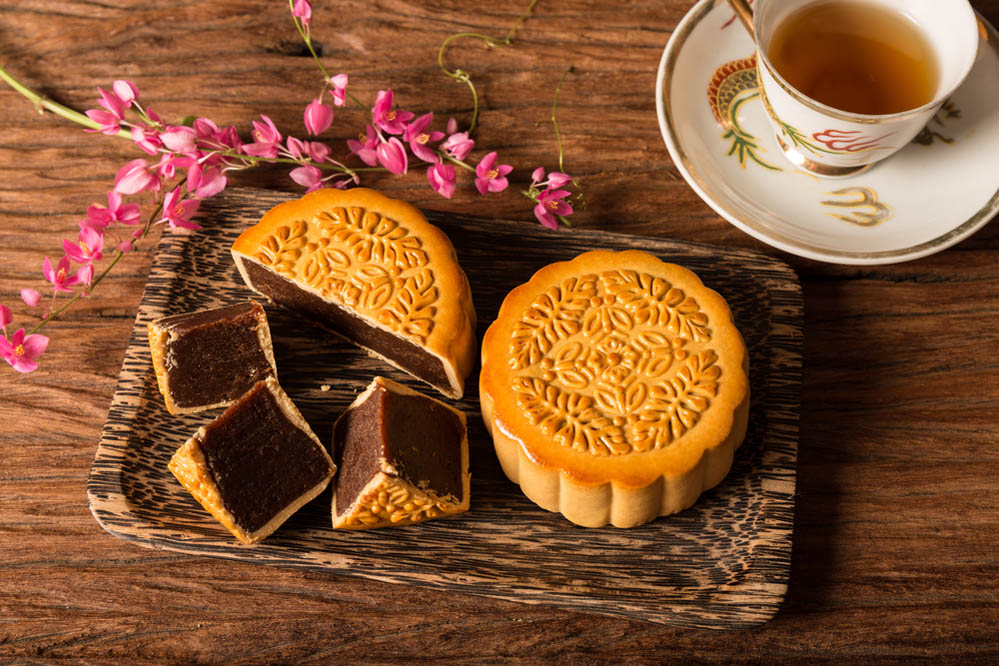 Taking a trip with Insight Guides: how to get started

If you are planning a trip to China, Insight Guides can help with the planning, organising and booking of your trip. Simply contact our local expert with details of the length of your trip, budget and places you would like to visit and they will plan your personalised itinerary. For inspiration browse Insight Guides ready-made China itineraries.