During the 32-year lifespan of the Berlitz Cruising and Cruise Ships guidebook, Douglas Ward has been privileged enough to enjoy some the world's best cruise experiences. Here, in no particular order, are his top 32 highlights 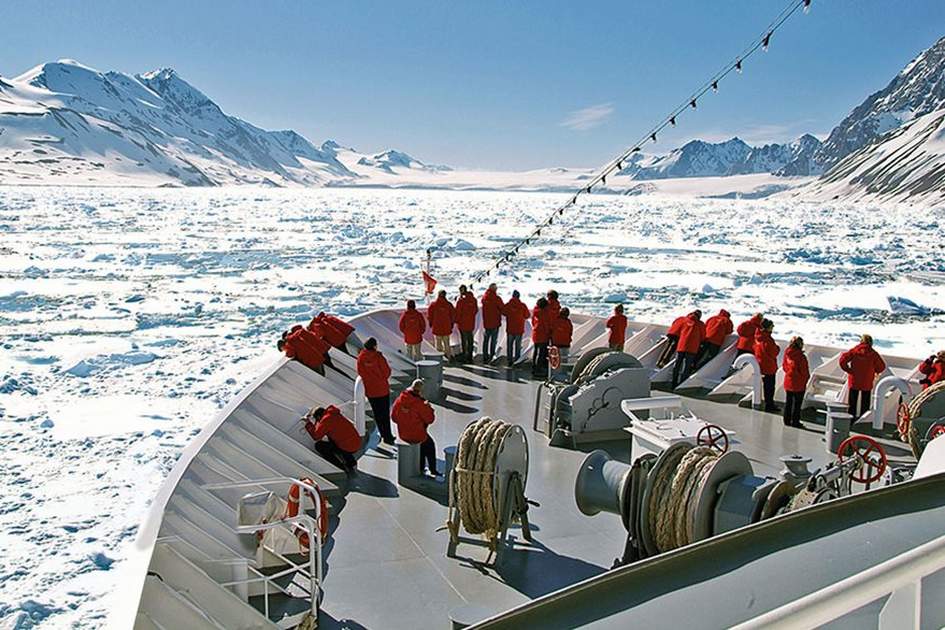 Travelling for up to 200 days a year aboard the world's finest cruise ships, Douglas Ward knows a thing or two about the experiences you shouldn't miss. Taken from the latest version of Berlitz Cruising & Cruise Ships, he shares his favourite things to do

Passing within an arm’s distance of Fingal’s Cave on the uninhabited island of Staffa (one of Scotland’s Inner Hebridean Islands), as Felix Mendelssohn’s Hebrides Overture (inspired by the real molten lava rock cavern) was played on the open back deck of the pocket-sized Hebridean Princess. At the time – late one chilly morning in spring – I was sitting wrapped in a tartan blanket under a grey, foreboding sky, enjoying a single malt whisky.

Watching from the observation deck above the bridge of Hanseatic, as the ship sliced slowly through the pack-ice in the incredibly scenic, steep-sided Lamaire Channel in the Antarctic Peninsula.

Enjoying freshly sliced tuna and yellowtail sashimi at Nobu Matsuhisa’s Silk Road Sushi Bar aboard Crystal Serenity. Not only was this a culinary tour de force, but watching the Japanese chefs was entertaining, too.

Sitting on the corner balcony of a Club Suite aboard Azamara Quest, admiring the beautiful scenery of Sorrento, Italy, with the ship at anchor off the famed coastline – with a Limoncello to hand.

5. Candles in the wind

Dining by candlelight at the aft terrace café of Aegean Odyssey while watching the mesmerising patterns created on the water by a full, seemingly orange moon in Southeast Asia. 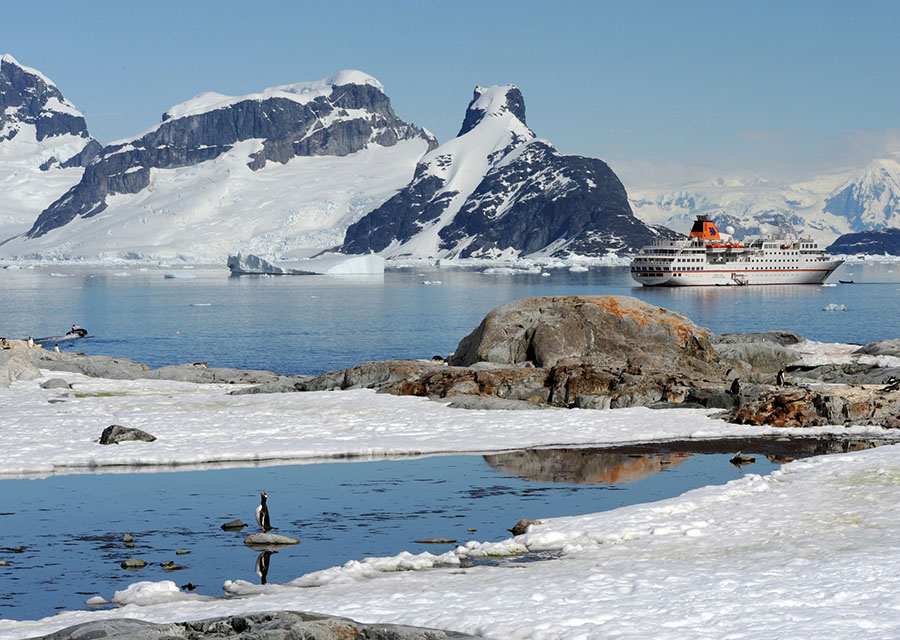 Sitting on my balcony, breathing in the fresh air and enjoying room-service steaming hot udon noodles, while transiting Alaska’s Inside Passage aboard Nippon Maru.

Being outside on deck watching as Queen Mary 2 turned majestically in Sydney Harbour and sidled up to Circular Quay, close to the Sydney Harbour Bridge and Opera House. All this with hundreds of spectators.

Lying down in the padded ‘Blue Lagoon’ seating area at the stern of the Sea Cloud, watching the sails directing this wonderful tall ship and seeing a shooting star pass quickly overhead – one of the most serene experiences to be had.

One Christmas Day, paying homage in Grytviken – the former Norwegian whaling station in South Georgia – with the passengers of the expedition ships Bremen and Hanseatic. We poured Aquavit on the grave of the explorer Sir Ernest Shackleton to toast the great man.

Cruising aboard a Hurtigruten ship, near Hammerfest or Honningsvag on the northern coast of Norway in October, and seeing the ‘green flash’ of the Northern Lights appear on the horizon, as the sun dipped and disappeared. 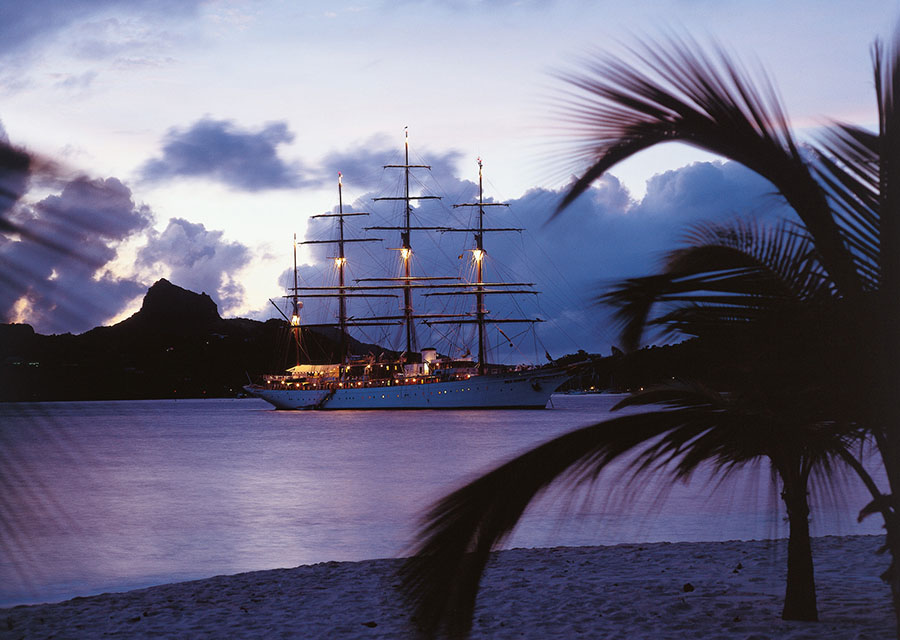 Standing on deck at the front of the ship, just before bedtime, in one of the wonderfully comfortable cotton sleep suits provided aboard SeaDream I and SeaDream II. The rhythm of the ship was lulling me to sleep as it sailed to its next destination.

Sitting in the netting hanging at the bowsprit (front) of the sail-cruise ship (tall ship) Star Flyer – an exhilarating experience, once you get accustomed to it. On this occasion, the ship was gliding gracefully through the water on a perfect, sun-filled day in the azure blue Caribbean Sea.

Standing on the foredeck of a cruise ship entering Halong Bay, a UNESCO-protected World Heritage site close to the Bay on Tonkin in Quang Ning Province in north-eastern Vietnam. Go in the early morning, when the mist is heavy, for an ethereal feeling of calmness. The dramatic limestone karsts (stone islands) surrounding the ship loom up from the sea-level cloud of heavy air.

Taking a bath in Cabin 1066 of the Queen Elizabeth 2 one evening during a transatlantic crossing, listening to Elgar’s Pomp and Circumstance on the in-cabin broadcast system and thinking: how incredibly British.

Watching as steel-wired electric mules (each costing over $2 million) pull your cruise ship into position in one of the lock chambers at Miraflores Locks in the Panama Canal. 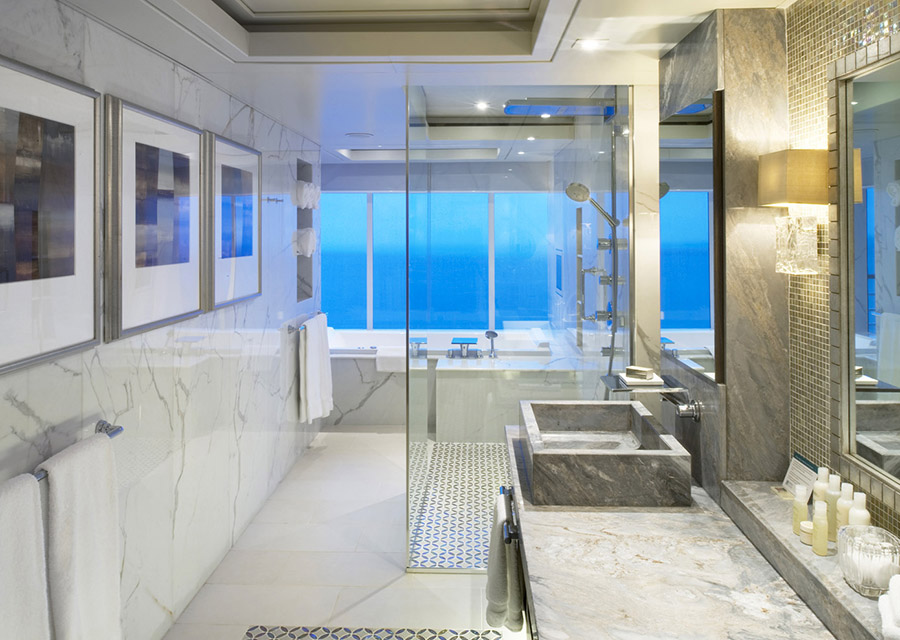 Being aboard a cruise ship sailing into or out of Venice, gliding past St Mark’s Square. It’s a view of Venice you only get from the deck (or balcony – if yours is on the correct side) of a cruise ship.

Being aboard a small cruise ship moored alongside the State Hermitage Museum in St. Petersburg, Russia. This takes you literally just a few steps away from the iconic building – one of the largest and oldest museums in the world, with over 3 million exhibits, including its stunning collection of Fabergé eggs.

Standing with outstretched arms, just like Kate Winslet in the movie Titanic, at the very front of Braemar, as the ship glides slowly through the Swedish archipelago towards Stockholm.

Staring at the horizon while lying in the bathtub in the ‘wet room’ with a heated floor in one of the two Deck 10 Crystal Penthouse suites aboard Crystal Symphony as the ship is gliding across the open water.

Sitting on the deck of a pocket-sized cruise ship in Glacier Bay, Alaska, watching the blue glacial ice calving, making you rock and roll as it slips, slides, and crashes into the water within inches of your body. 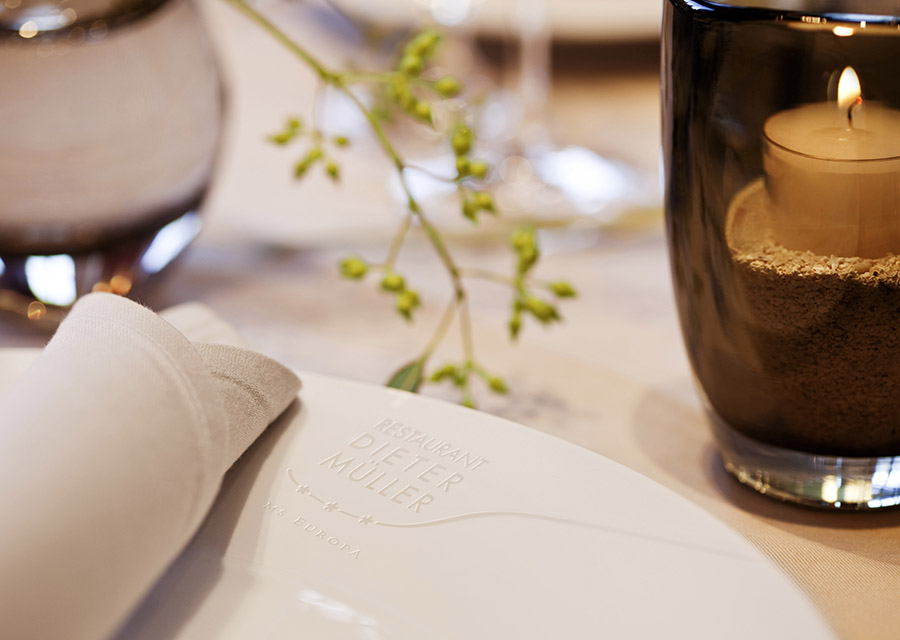 Sitting in a pool of silica- and sulphur-rich geo-thermal water in Iceland’s Blue Lagoon – a man-made outlet close to the Svartsengi power plant and part of the lava field located on the Reykjanes Peninsula. This is offered as part of a tour from your cruise ship.

Meeting someone you never expected to, or thought possible to meet. On cruises over the years, I have been fortunate enough to meet, talk to, and have a drink with some well-known film stars and other personalities including Elizabeth Taylor and Richard Burton, Tippi Hedren, Dame Margot Fonteyn, and the conductor Leopold Stokowski.

Being aboard a photo tender arranged by the cruise line (in my case, this was aboard a tall ship), and taking photographs as the tall ship was under full sail and not slowing down. An exhilarating experience that you can still enjoy.

Being aboard a cruise ship off the north coast of Sicily, where you can pass close to Stromboli in action. The almost constantly erupting volcano bursts into life and emits incandescent lava.

Dining in the intimate Dieter Mueller At Sea restaurant aboard Hapag-Lloyd Cruises’ Europa. Mueller – a three Michelin-starred chef – sold his own restaurant and now operates his own seagoing dining venue for six months each year. 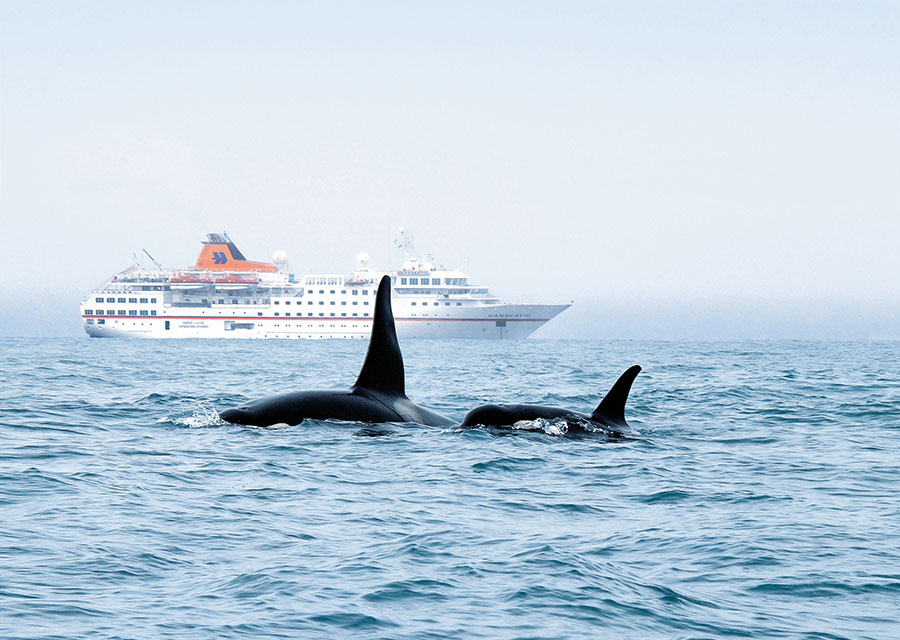 I was lucky enough to be on deck aboard one of the expedition cruise ships in Antarctic waters when a number of killer whales (orcas) splashing in the water just off the starboard side aft, making the ship rock. They were so close that I could have touched one of their dorsal fins. A spectacular show of nature.

Being aboard ship supping Champagne while enjoying the magnificently colourful New Year’s Eve firework display in Funchal, Madeira. A cruise ship offers the very best vantage point for this fantastic display, which lasts around 10 minutes and is considered to be one of the most spectacular in the world.

Careening along the zip line strung between rows of cabins high above the deck of Allure of the Seas. Quite a surprise to the occupants of those cabins!

Enjoying the anticipation and excitement of a maiden voyage aboard a brand new ship – an experience highly prized among cruise collectors. Just be prepared for the fact that it might not all be smooth sailing and there might be teething troubles.

Looking for a partner? I met my future wife aboard a Japanese cruise ship some years ago, and we married several years later. You too, could meet the person of your dreams aboard a cruise ship – it happens all the time. 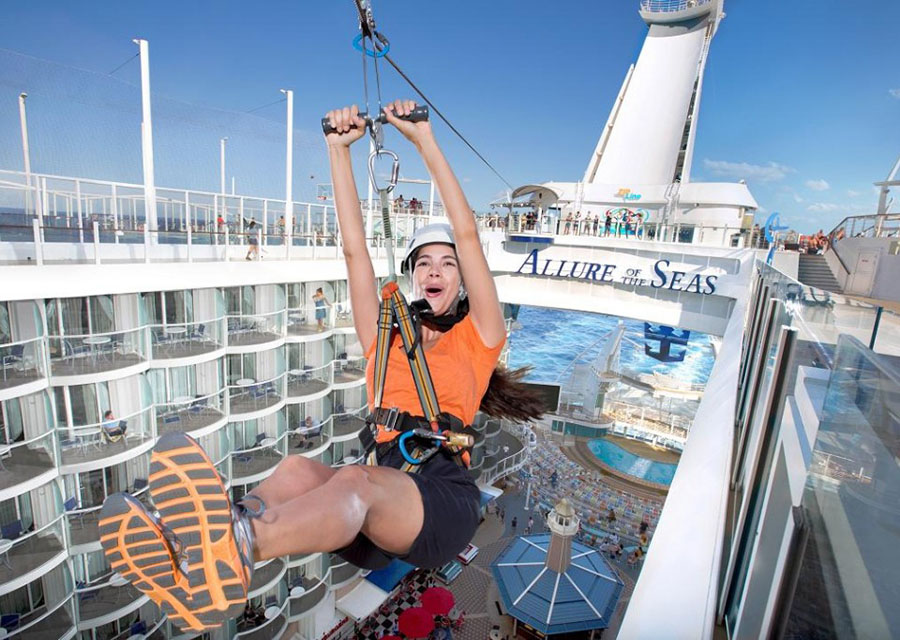 Having breakfast in a 'Royal Box' on deck aboard the boutique ships SeaDream I or SeaDream II while at sea.

Tasting some beautiful artisan cuisine prepared by chefs whose restaurants had three Michelin stars aboard Europa for the annual Europa's Best event in Antwerp. Some of the finest cheese and wine producers from Austria, France, Germany and Switzerland displayed their wares, too. This culinary heaven can be enjoyed by anyone with a ticket

Ready to plan your own cruise?

Plan an alternative adventure: Top places to visit in 2016

Take a trip in summer: Where to go in June, July and August

Book your autumn holiday now: Where to go in September, October and November

5 sightseeing cruises that are simply amazing