6 of Japan's best temples and shrines

Beautiful Buddhist temples and Shinto shrines can be found all over Japan, a country that simultaneously embraces tradition and pushes the boundaries of innovation. Here are six of the best… 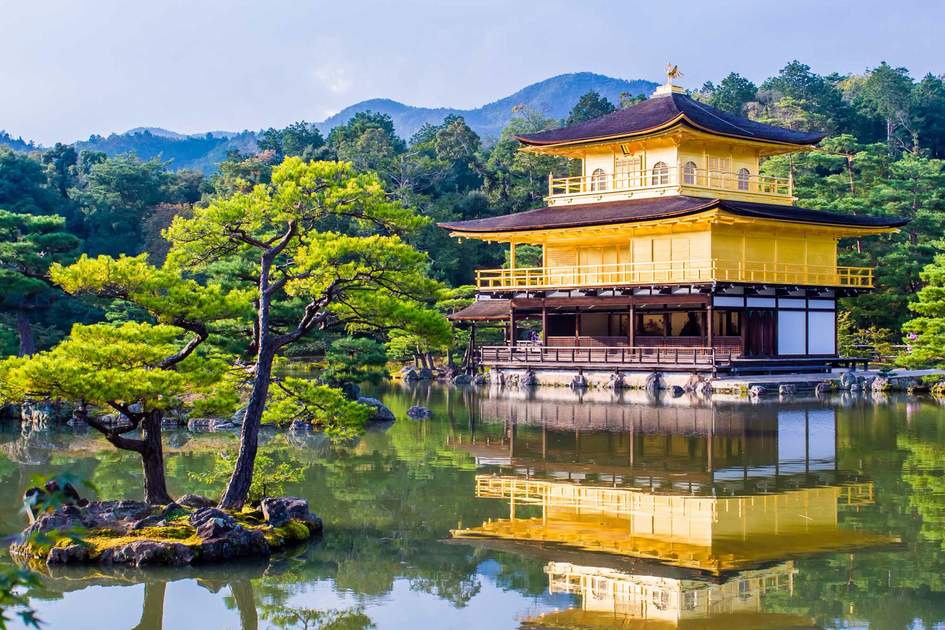 Asakusa Kannon Temple is Tokyo’s most visited temple, and it hosts dozens of annual events and festivals. It is perhaps the oldest Buddhist temple in the region, and like most old places, it started with a legend. Asakusa’s legend has it that Senso-ji was founded in AD 628 when two fishermen netted a small statue of Kannon, the deity of mercy. A temple was built by the village leader to house the statue.

The south entrance to the temple, on Asakusa-dori, is a large gate called Kaminari-mon, or Thunder Gate. Here begins Nakamise-dori (literally, ‘inside the shops’), where two rows of red buildings funnel temple-goers northwards through a souvenir arcade – full of craft and dry-food goods – before spilling out onto the temple grounds.

Kanda Myojin Shrine is one of Tokyo’s liveliest shrine compounds, especially at weekends, when Shinto weddings, rituals, cultural performances and festivals are held here. Most famously, it is the venue of one of the city’s main festivals, the Kanda Matsuri. The architecture of the shrine is bright and cheerful, decorated in vivid colours and dedicated to the rebel general Taira no Masakado.

If you continue up the slope from here, you’ll reach Yushima Tenjin, the city’s foremost shrine of learning, a place much frequented by students supplicating the shrine’s tutelary spirit for favourable exam results. The grounds of the shrine are a popular spot for plum-blossom viewing in mid-February. 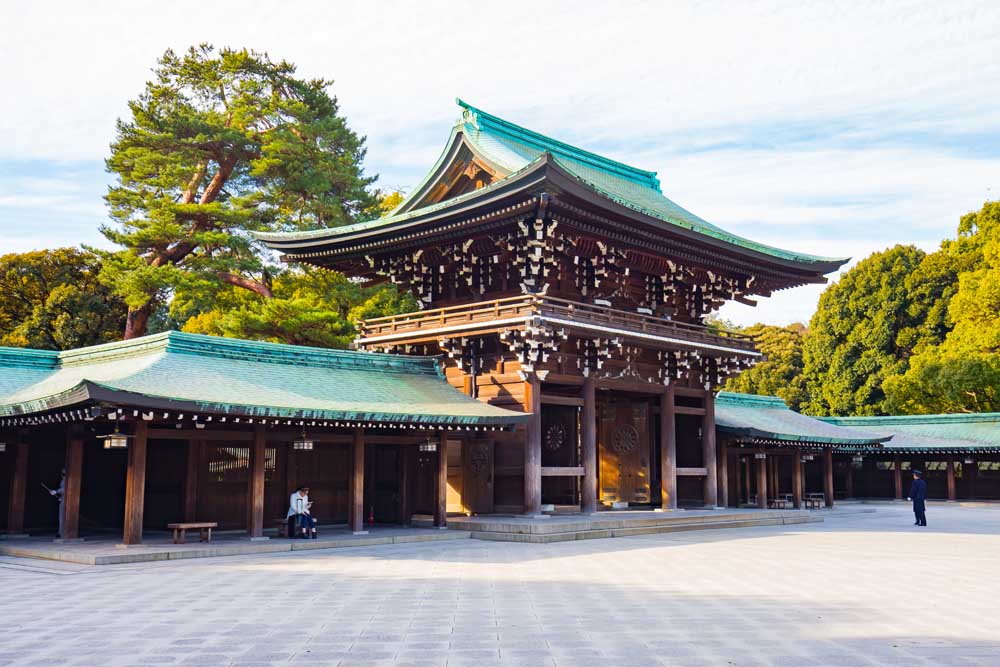 Meiji Shrine, located in Shibuya, Tokyo, is a Shinto shrine dedicated to the deified spirits of Emperor Meiji and his wife, Empress Shoken. Photo: Shutterstock

Meiji-jingu is one of Japan’s most famous Shinto shrines. The shrine deifies Emperor Meiji and Empress Shoken. Their remains, however, are in Kyoto. The emperor was restored to rule in the 1868 Meiji Restoration, when the Tokugawa shogunate collapsed. The emperor died in 1912 and the empress two years later. The original shrine, built in 1920, was destroyed during World War II; the current buildings were reconstructed in 1958. The shrine itself is constructed of Japanese cypress.

The grounds cover 175 acres (70 hectares) and were a favourite retreat of the emperor. The long walk to the shrine passes through a tunnel of trees and beneath three large torii gates, said to include one of the largest wooden gates in Japan: 40ft (12 metres) high with pillars more than a metre in diameter. Cypress wood over 1,700 years old from Taiwan was used for the gate.

The pride and joy of Yamadera Prefecture is the awesome temple complex of Risshaku-ji, better known as Yamadera. It was founded in 860 by a Zen priest. Perched on the side of a mountain, its 40 or so temple buildings, connected by paths leading through ancient cedar forest, are a fantastic sight even for those who may feel templed-out.

The main hall, Kompon Chudo, dates from the 14th century; other structures from the 16th century. At the top of the 1,015 steps you’ll need to ascend is Okuno-in, the holy of holies for the pilgrims who offer up prayers here. At the foot of the hillside, you’ll come across a statue of the poet Basho, whose famous work The Narrow Road to the Deep North includes a haiku written while visiting Yamadera: ‘How still it is! Stinging into the stones, The locust’s trill.’

Kinkaku-ji, or the Golden Pavilion, is the best-known temple in Kyoto, if not all Japan. It’s a replica built in 1955 of a 15th-century structure that was re-covered in gold leaf in 1987. Each of the pavilion’s three storeys reflects a different architectural style. The first floor is of the palace style, the second floor of the samurai-house style, while the third floor reveals the Zen-temple style. The large pond in front of the pavilion and surrounding grounds gave it a perfect setting.

The original temple was burned down in 1950 by a man who entered the Buddhist priesthood after being seduced by the pavilion’s beauty. Thinking that his sense of aesthetics might approach perfection if he burned down the very object that had enchanted him in the first place, he did exactly that. The author and right-wing nationalist Mishima Yukio fictionalised the burning episode in his 1956 book, Kinkakuji. 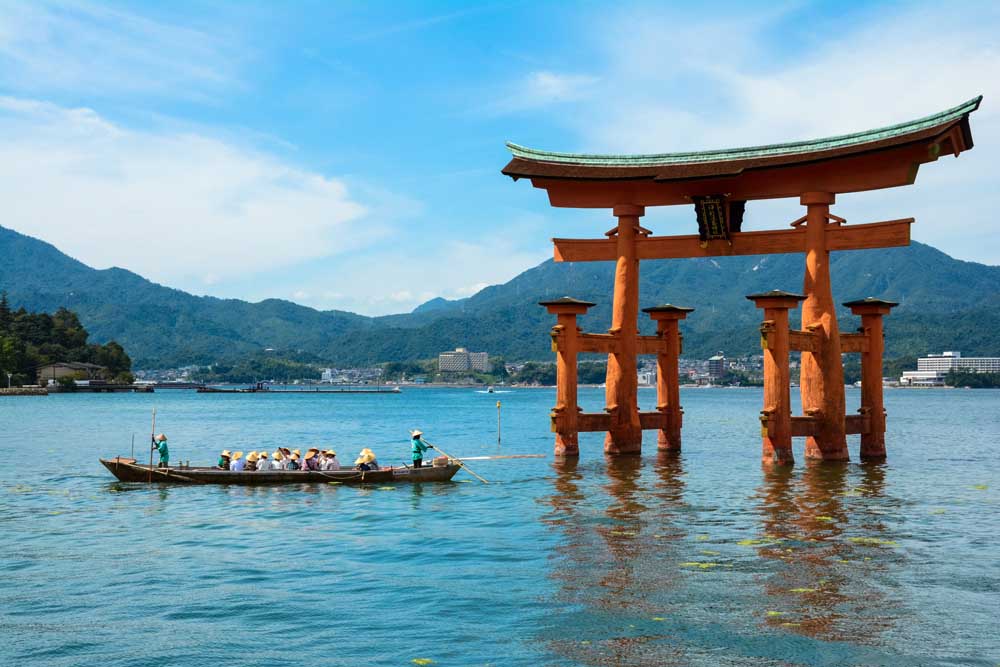 The famous Itsukushima-jinja shrine rising out of the sea. Photo: Shutterstock

The large crimson torii (shrine gate), rising out of the sea, is one of the most familiar Japanese cultural icons. But this torii, which is plastered on nearly every travel poster and guidebook that has anything to do with Japan, hasn’t suffered from overexposure. For those who stay overnight on the island, it is especially breathtaking in the evening, when the crowds have returned to the mainland.

The current gate was built in 1874, but a similar torii has lured visitors for seven centuries. The island’s spiritual roots are much older, however. The first shrine, honouring Amaterasu’s three daughters – goddesses of the sea – was built in the 6th century. To maintain the islands ‘purity’, births and deaths have been prohibited on Miyajima from the earliest times. The entire island was dedicated as a sanctuary by Taira no Kiyomori, who ordered the Itsukushima-jinga completely rebuilt in 1168.

Itsukushima-jinga itself rests on stilts and seems to float like a giant ship when the tide comes in. Costumes and masks used in the bugaku dance festival and the noh plays are on display in the Asazaya (morning prayer room), which is reached via bridge.