Lizzie Williams explains where to find the best beaches around Cape Town, whether you're after buzzing beachside bars, secluded coves, rolling waves or a romantic spot for a sunset picnic 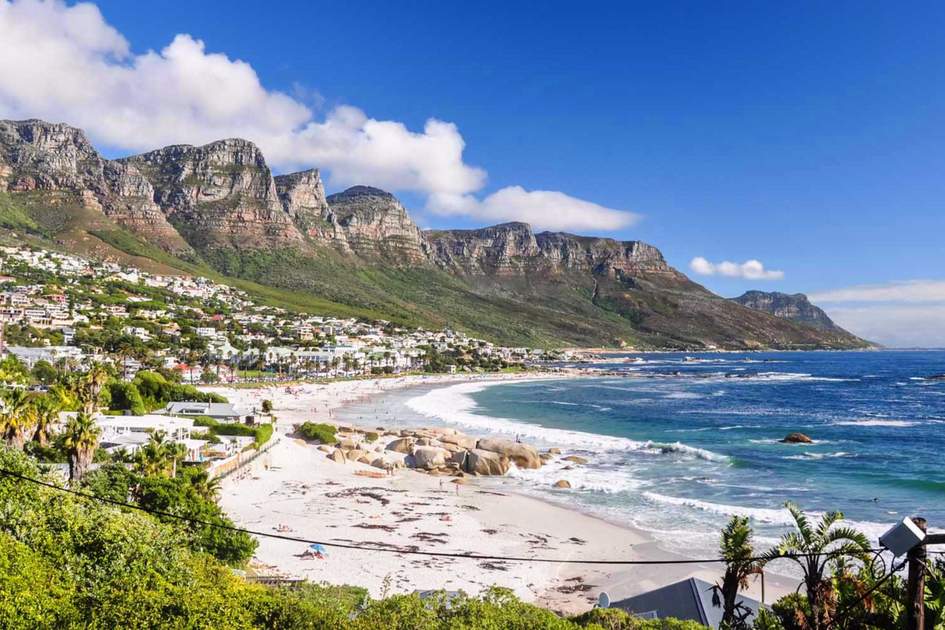 Taking a holiday to South Africa: how to get started

Insight Guides can help you with planning, organising and booking your trip to South Africa. Simply, get in touch and share your budget, interests and travel style. Our local experts will create an itinerary exclusive to you and your requirements, which you can amend until it's just right. Alternatively, browse and modify ready-made holidays to create your dream trip today.

Characterised by platinum-blonde sands and minimalist swimwear, the gently curving crescent of palm-fringed Camps Bay is the best-loved and most photographed beach on the Cape Peninsula. It is where the well-to-do and the famous congregate to see and be seen, although swimming in the cold Atlantic is for diehards only. The beach is backed by hillsides packed with expensive penthouses and designer apartments, and there are beautiful views of the Twelve Apostles — the rugged spine of fynbos-covered mountains that run from Table Mountain to Cape Point. The Camps Bay ‘strip’ opposite the beach is a line of fashionable restaurants and cocktail bars. On peak summer days there is no better place in town for a seafood platter and an ice-cold beer or flute of champagne while watching a dazzling sunset.

The four impossibly beautiful beaches of Clifton on the Atlantic Seaboard are separated by giant boulders into four coves of soft white sand. Named Clifton 1st, 2nd, 3rd and 4th, they are accessed via a series of steep steps down hillsides of densely-packed luxury apartments, and each attracts a slightly different crowd; from gay party-goers and volleyball competitors on 1st and 2nd, to sun worshippers and frolicking families on 3rd and 4th. Sun-loungers and umbrellas can be rented, and vendors sell ice-lollies and cold drinks. On summer evenings, follow the locals and take a cool box of goodies down for a sunset picnic. Again the water is fairly chilly, but because of the cove formations, Clifton’s beaches are sheltered and remain largely unaffected by Cape Town’s summer south-easterly winds. Experience both Clifton and Camps Bay for yourself during Insight Guides' Cape Town Explored holiday; review the full trip itinerary online now.

South of Camps Bay and on the way to Hout Bay, a narrow road winds its way down through the exclusive hillside neighbourhood of Llandudno, where the beach lies nestled in a peaceful sandy cove flanked by rocks at either end. This small settlement has no shops or cafés but vendors operate on the beach for snacks, drinks and ice-creams, while deckchairs and umbrellas can be rented. Again, the Atlantic is cold here, but Llandudno’s waves make it a popular surfing spot, the broad sands are great for families building sandcastles and waggy-tailed dogs, and it’s another great west-facing venue to watch the sun go down. From Sunset Rocks at the southern end, it’s a 20-minute walk to Sandy Bay; Cape Town’s only beach where clothing is ‘optional’. 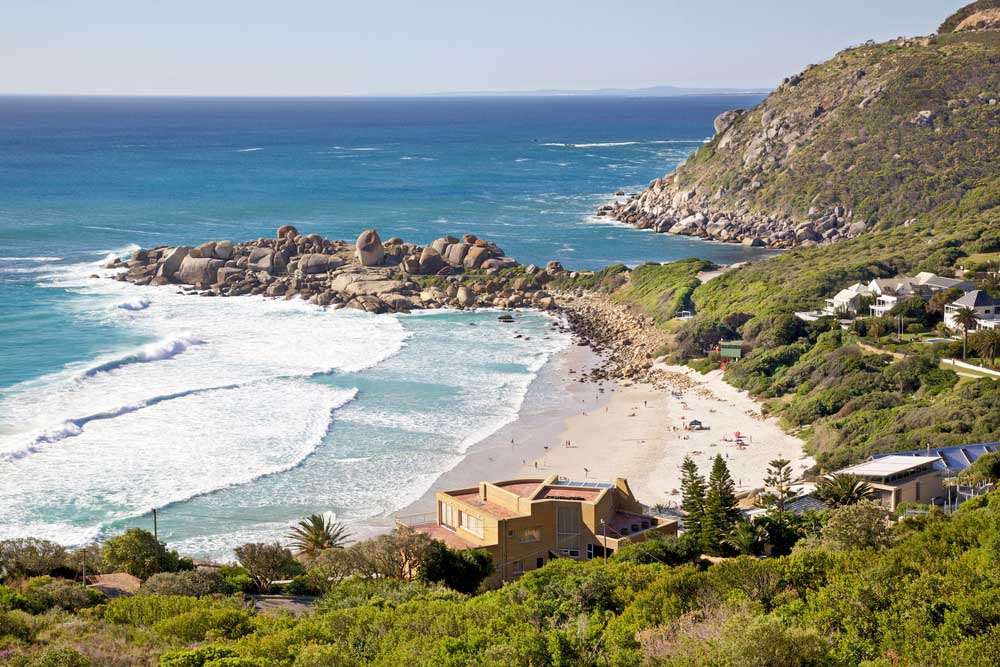 Llandudno Beach is one of Cape Town's best beaches for surfing. Photo: Shutterstock

As you round one of the last hairpin bends of the incredibly scenic Chapman's Peak Drive in the direction of Noordhoek village, stop for a few minutes to gaze down at the broad expanse of Noordhoek Beach. This vast stretch of bone-white sand and pounding surf on the Atlantic side of the peninsula runs for about 8km (5 miles) towards the village of Kommetjie and is backed by wetlands protected in the Table Mountain National Park. As such, the beach is free of the urban sprawl that characterises many of Cape Town’s bays, and behind the wetlands rise magnificent mountains covered with green coastal fynbos and wild flowers. Not one of best swimming beaches as conditions are often rough and water temperatures cold, but it’s perfect for long walks, kite-flying and horse-riding.

Situated where the Cape Peninsula curves around to the east on the False Bay coast, the long broad sandy beach at Muizenberg, or “Muizies” as it’s affectionately known to locals, is Cape Town’s premier surfing spot. Sheltered by the bay, water temperatures are far more welcoming than the exposed seas of the Atlantic and the shallow waves offer good swimming, great family fun and it’s an ideal place to learn to surf – there are schools at Muizenberg’s Surfer’s Corner. These waters do tend to draw sharks, but there are shark-spotters on duty and the beach has a rigorous protocol to get swimmers and surfers out of the water. Muizenberg itself had its heyday as a seaside town in the 1950s and 1960s; after some years of decay, its cheerful promenade has now had a revamp and a number of trendy eateries, bars and shops have made it very attractive again. 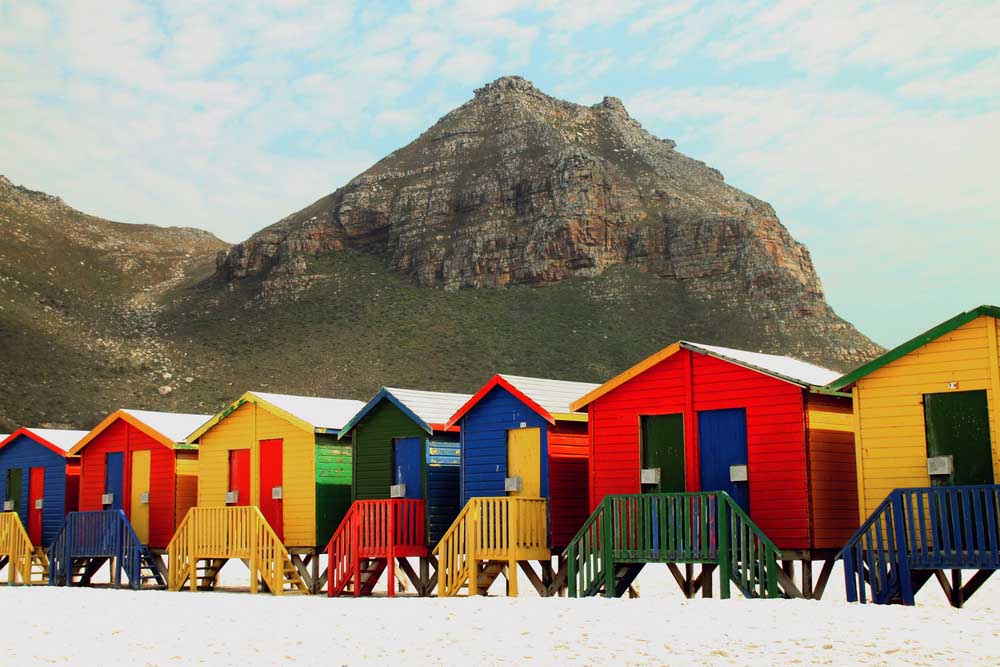 Beach huts at Muizenberg, where the water is warmer for swimming and another of Cape Town's best beaches. Photo: Shutterstock

Sheltered by large, rounded granite rocks (hence the name) and with soft sand and warm sea, Boulders Beach lies on the False Bay coastline south of Simon’s Town. Most famous for its protected colony of African penguins, day tours of the Cape Peninsula make a stop at the Boulders Visitor’s Centre, which is administered by the Table Mountain National Park. From a boardwalk over the beach here you can see these endearing birds strut their stuff and learn everything there is to know about this endangered penguin species in what is considered the largest colony on the African mainland. There are also nearby places on the sand to sunbathe and swim where you might spot the odd penguin waddling by, and Simon’s Town itself is one of the oldest Cape settlements with a strong naval tradition, reflected in its number of museums and monuments. Explore at your leisure on a guided tour of the Peninsula on Insight Guides' Cape Peninsula to Victoria Falls holiday.

A northern suburb of Cape Town along the West Coast, Bloubergstrand is 17 km (10.5 miles) due north of the city centre. The sandy beach is long and open and it’s popular with families and dog-walkers, as well as for evening sundowners and picnics. It’s also a great whale-watching viewpoint in season, and on the west side of Bloubergstrand, Big Bay is the closest spot to Cape Town for kite-surfing thanks to good surf and constant cross-shore winds. But the real reason to come to Bloubergstrand is the view – from the beach is inarguably the most beautiful (and photographed) panoramic vista of Table Mountain lying on the horizon across sweeping Table Bay.

Lizzie Williams is a guidebook writer based in Cape Town and spends a considerable amount of time on the road exploring Africa; stay up-to-date with her adventures on the Insight Guides blog. Look out for posts on Cape Town's best markets and where to take afternoon tea early in 2017.

This article was originally published on December 9, 2016

Ready to take your trip to Cape Town's best beaches with Insight Guides?

Everything was perfect. Zorica was really professional and amazing. Thanks for your support