This walking tour connects two of Rome's most characterful medieval neighbourhoods: the Jewish Quarter, with its ancient Roman roots, and lively Trastevere, with its bohemian heart. Both have been home to fringe cultures for centuries. You'll find a map at the bottom of the page and our recommendations for the best places to eat and drink along the way. 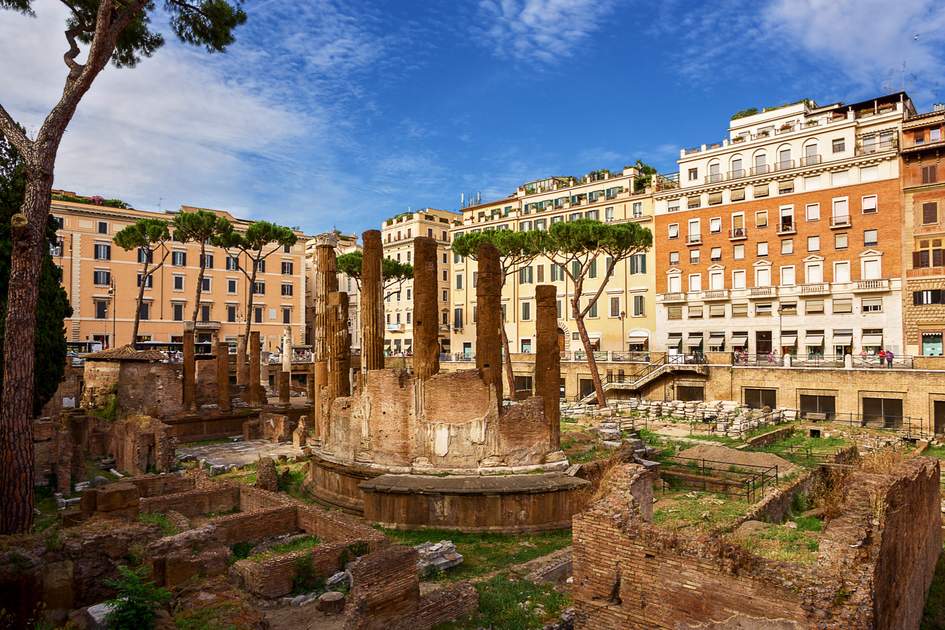 Time: A half day

Points to note: Trastevere, where this route ends, is an ideal place for an evening drink or dinner. Consider this route for an afternoon and finish as the neighbourhood comes to life.

Speak to a local expert about arranging the trip of a lifetime to the Rome here, or browse our fully customisable existing itineraries here.

The route begins at the centre of the traffic-clogged Largo di Torre Argentina [black map dot 1], a piazza with a subterranean archaeological area called the Area Sacra dell’ Argentina. The remains of the four 3rd-century-BC temples were only discovered and excavated in the 1920s. This area gives some impression of the scale of ancient Roman buildings and the level of the original streets. At the southwest side are the headquarters of the cat sanctuary, whose inhabitants can be found draped about the ancient ruins. 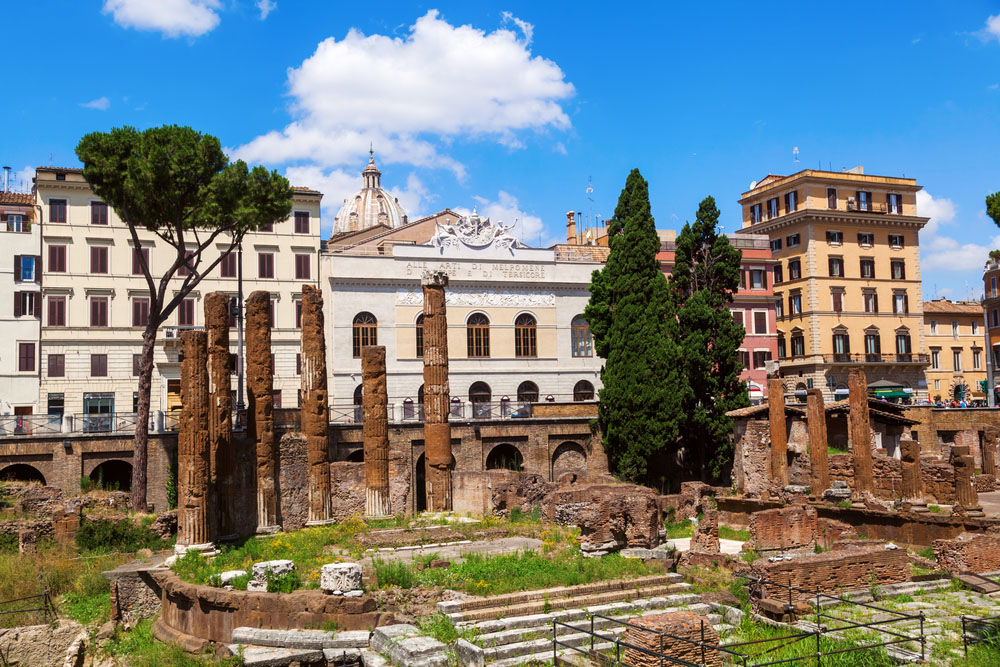 Leave the piazza from the southeast corner along little Via Paganica. This will bring you to the northern edge of the Jewish ghetto (the quarter between the Monte dei Cenci and the Teatro di Marcello), home to one of Europe’s oldest communities of Jewish families. The ghetto was walled in by the papacy in 1556, although the walls were torn down following the Unification of Italy. Via Paganica opens onto the diminutive Piazza Mattei with the Fontana delle Tartarughe (Fountain of the Tortoises) [black map dot 2], completed in 1585 to designs by Giacomo della Porta. a visit to the Jewish Quarter is included in Insight Guides' The Wonders of Rome and the Amalfi Coast trip. 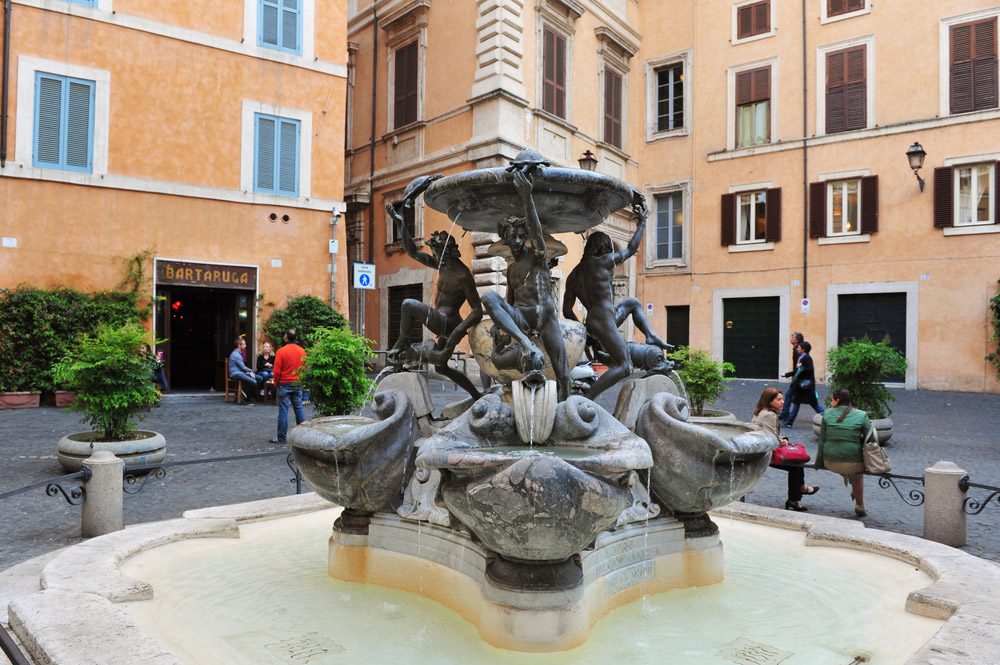 Head east along the Via dei Funari into the lanes of the ghetto; keep right at the piazza, following the Vicolo di Campitelli, through the arch and onto the back of the Teatro di Marcello.

Coming around the archaeological area dominated by the Teatro di Marcello, you will find the ruined Portico d’Ottavia [black map dot 3], the entrance to a colonnaded walkway built in 147 BC by Augustus to display statues captured from Greece. It was dedicated to his sister Ottavia, the unlucky wife of Marc Antony. By the 18th century the ruins of the Portico were home to a fish market, and it is recognisable in many genre paintings of the period. Da Giggetto [green map dot 1], makes a good pitstop here. 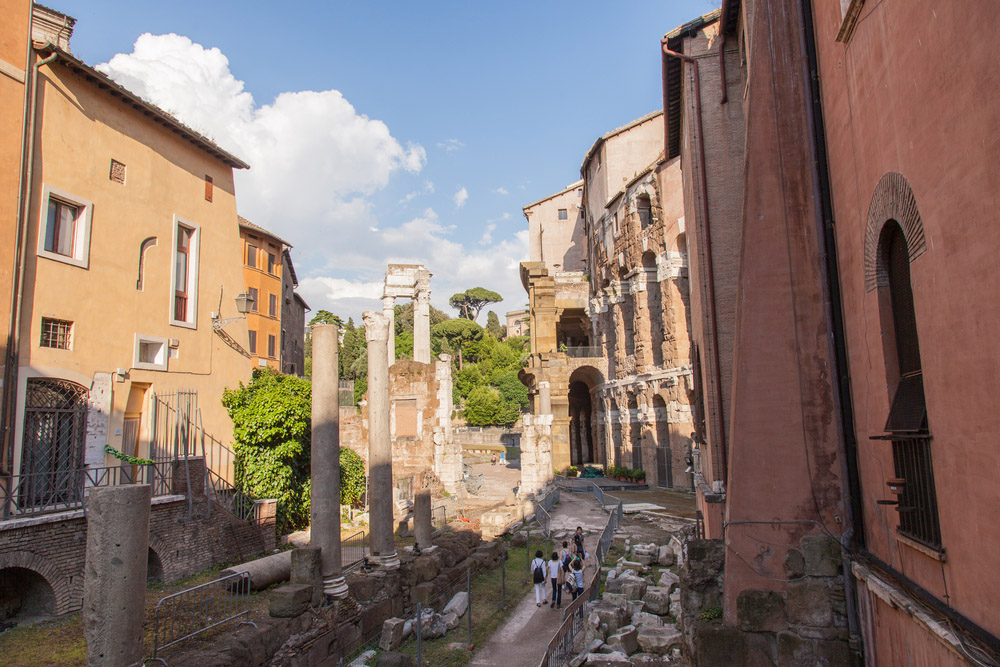 Cross the piazza created along the Via del Portico d’Ottavia into the heart of the Jewish Quarter, to the Piazza delle Cinque Scole [black map dot 4], recognisable by the basin fountain at the back of the Palazzo Cenci. The palace was once home to a powerful dynasty, whose tragedies were written about in Percy Bysshe Shelley’s drama The Cenci.

Head east away from the palace, and, at the end of the Via Catalana, is the Sinagoga [black map dot 5] (Sun–Thur 10am–4.15pm, until 6.15pm in summer, Fri 9am–2pm, until 3.15pm in summer; tours hourly; charge). It was constructed in 1904, after the Unification of Italy, as a symbol of newfound freedom, and has an Art Nouveau interior and an unusual aluminium square dome. 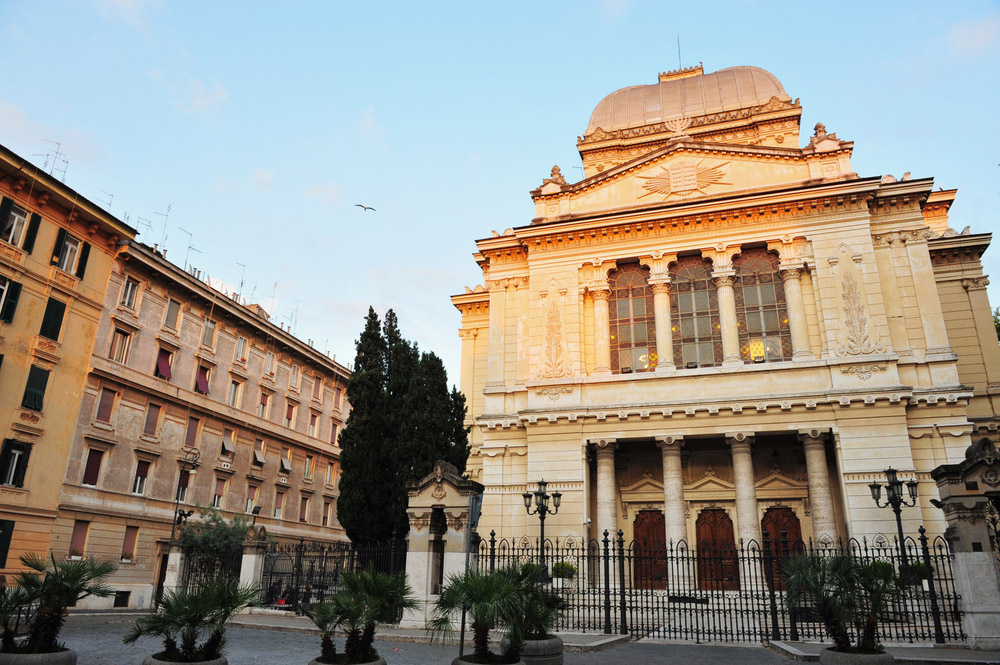 Cross over the Lungotevere dei Cenci and make your way over the oldest-standing bridge in Rome, the Ponte Fabricio (built in 62 BC). You will come to the Isola Tiberina (Tiber Island) [black map dot 6], the smallest inhabited island in the world. A temple to Aesculapius, the Greek god of medicine, once stood on the island. There has been a church and hospital on this site for centuries.

In the middle of the island is the wonderful Sora Lella [green map dot 2]. During the summer, the wide sloping banks are home to festivals, outdoor eateries and beer gardens. From the south side of this lower level it is possible to see the ancient Ponte Rotto (Broken Bridge), the carved remains of Rome’s first stone bridge. 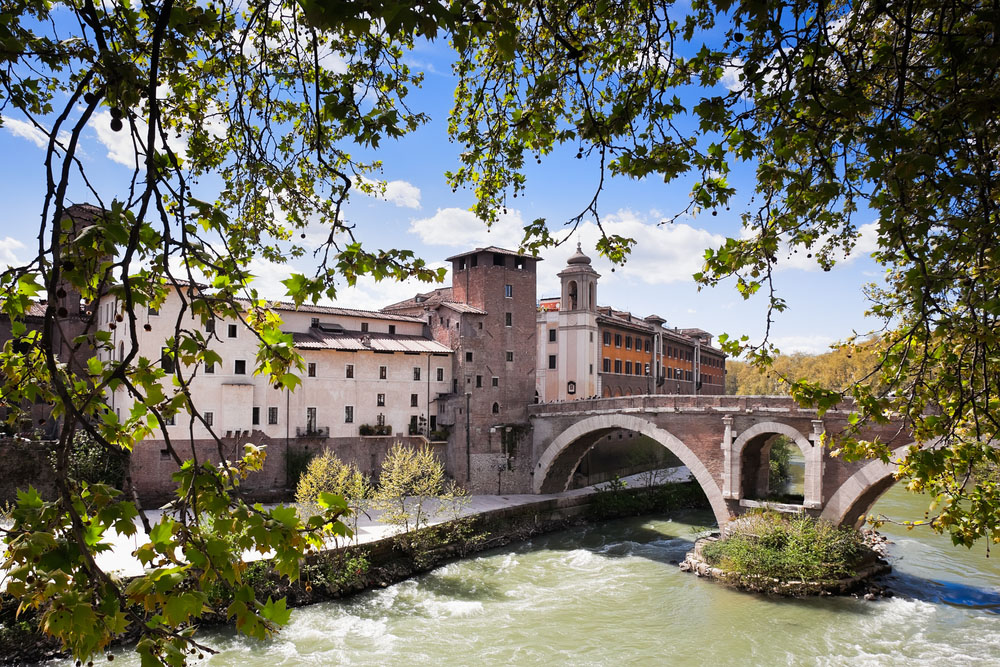 Leaving the island, cross into Trastevere, meaning ‘across the Tevere’ (the Italian name for the Tiber river). Many of the street names here reflect their original function.

From the Ponte Cestio, cross the Lungotevere Anguillara and turn left along the river, then turn right (southwest) past the car park along the Via Titta Scarpetta to the Via dei Salumi (Street of Salami). Turn left here and take the second right, Via Vascellari. Continue until you reach the church of Santa Cecilia in Trastevere [black map dot 7]. This late-4th-century church is dedicated to St Cecilia, one of the early martyrs. The current structure dates primarily from the 12th century, with some original elements, and the interior has impressive mosaics from the period. Look for the fragmentary Last Judgement frescoes by Pietro Cavallini in the galley, and an incredible Baroque sculpture of Santa Cecilia by Stefano Maderno below the altar. 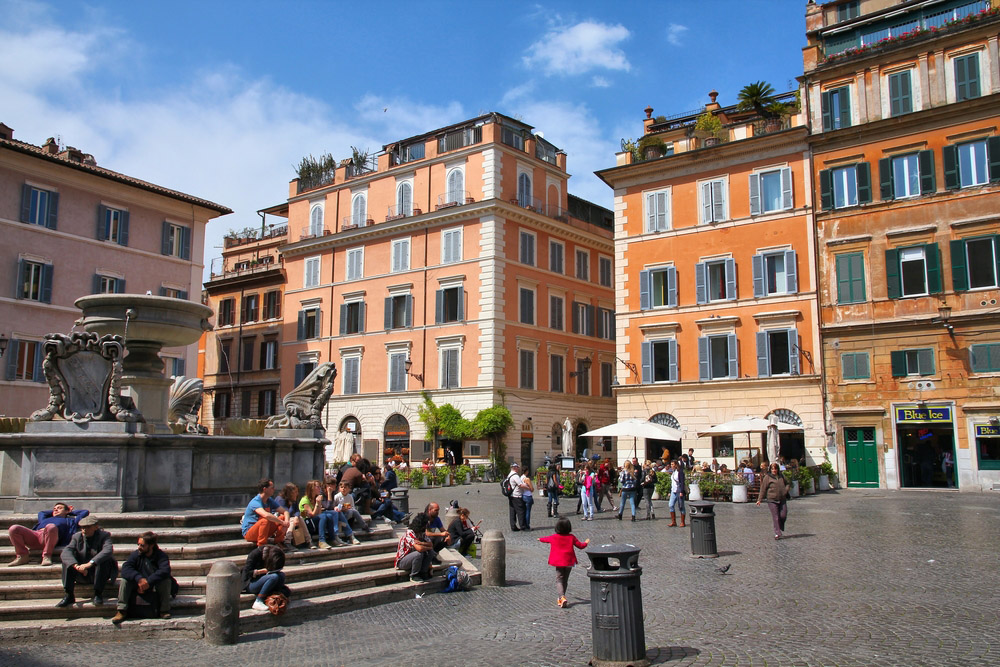 Soaring temperatures? Find out where's The Best Place for an Ice Cream in Rome

Double back along the Via di Santa Cecilia, then turn left (west) along the Via dei Genovesi. When you reach the Viale di Trastevere, turn right and head past the church of San Crisogano, then turn left into Via della Lungaretta. This road acts as the main thoroughfare into central Trastevere, and the street performers, vendors and outdoor pizzerie spill out into the large piazza at the end. For a taste of the characteristic side streets turn left onto the Vicolo della Torre and follow the Via dell’Arco di San Calisto until you arrive at the piazza. Explore Trastevere as part of Insight Guides' The Wonders of Rome and the Amalfi Coast trip.

The focal point of the piazza is the basilica of Santa Maria in Trastevere [black map dot 8] (daily 7.30am–9pm, 1.30–8pm). It is one of the earliest Christian churches, dating from the 3rd century, although, like many others in Rome, it was rebuilt in the 12th century. The granite columns along the nave were taken as spoils from the Baths of Caracalla. The mosaics of the Virgin Mary on the front of the church give some idea of the style and quality of the decoration within. Of note are the apse mosaics that complement Cavallini’s series of the Life of the Virgin dating to 1291.

There are many good restaurants, cafés and bars in this area, including the Ombre Rosse [green map dot 3], or the modern Friends Art Café [green map dot 4]. 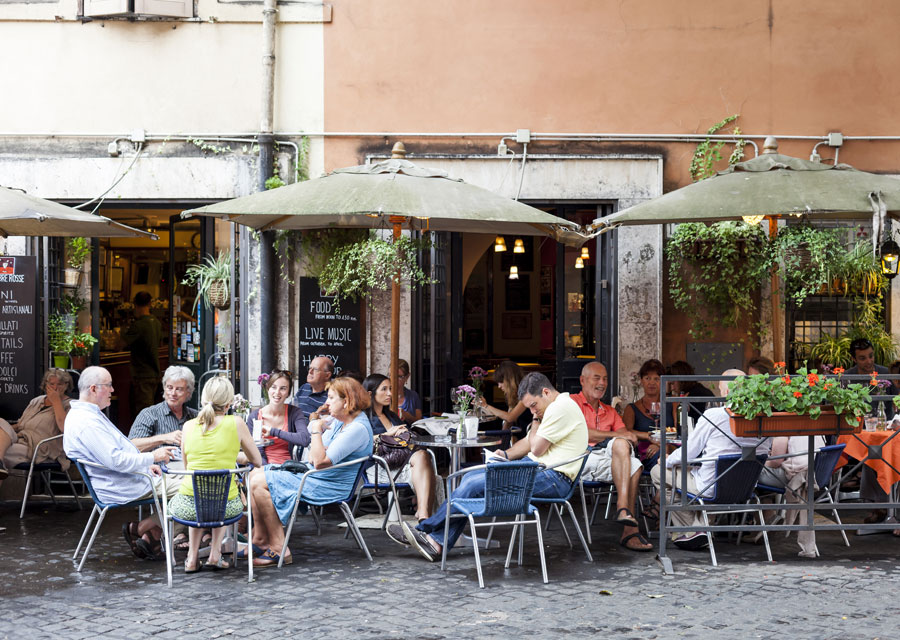 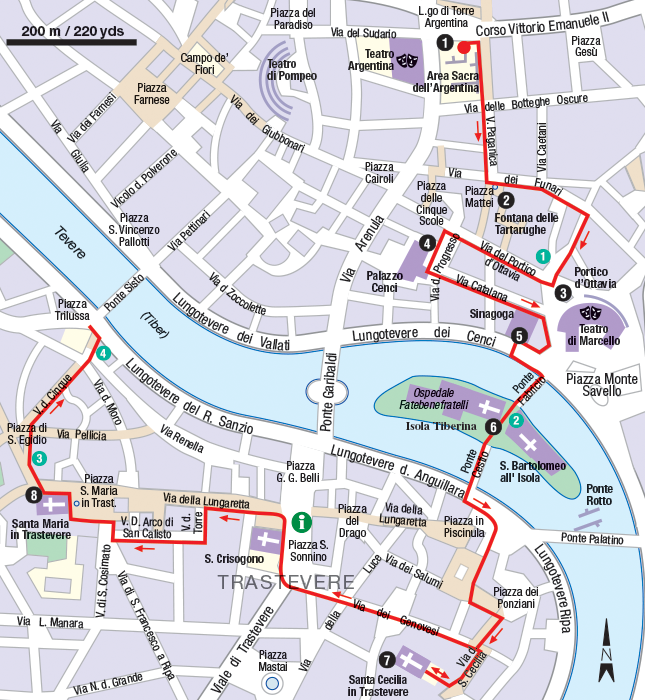 Speak to a local expert about arranging the trip of a lifetime to the Rome here; alternatively, browse existing, fully customisable itineraries, such as the Wonders of Rome and the Amalfi Coast.

This route is taken from our guide, Explore Rome.