February's best festivals: Rio and beyond

Get ready to party! Some of the world's best carnivals take place in February, so grab your painted mask, learn to samba and join in with the revelries – taking part in Carnival is a true travel experience 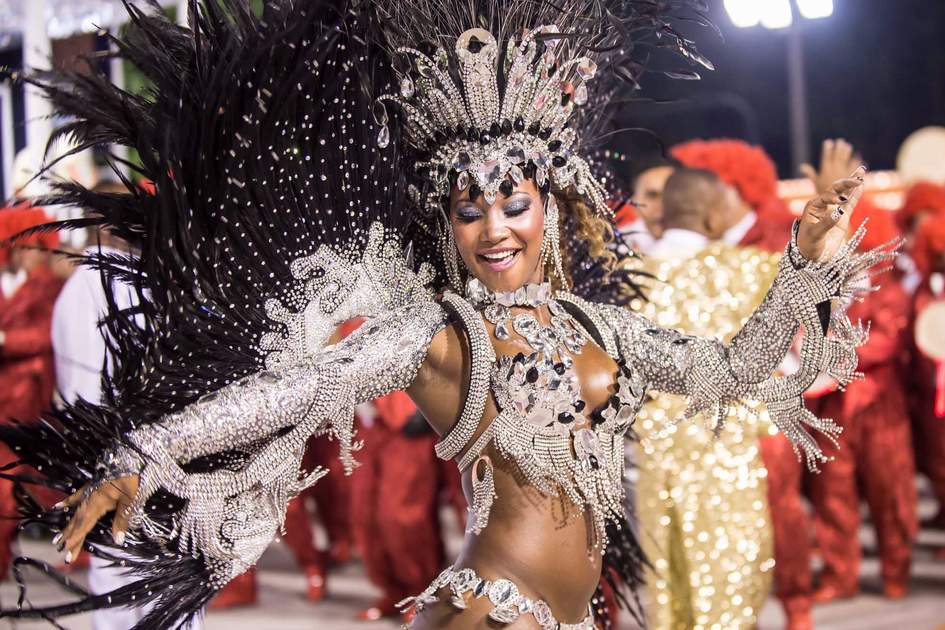 For many places around the world, February means carnival. The famous festivities in Rio de Janeiro will begin at the end of the month, with thousands of visiting party-goers jetting in to join the fun. Rio's carnival is known as “The Biggest Party on Earth,” but it is by no means the only carnival in town. Read on for our run-down of the world's best carnivals that will show you a good time in February

So what is Carnival? Many celebrations are often linked to Lent (and no surprise that most events take place in Catholic countries, or those with a Catholic heritage); the words carne vale, the Latin for "farewell to meat", meant as a last blowout – particularly on Mardi Gras (Fat Tuesday). This signals the start of the long and rigorous Lenten period, marked by abstinence from the pleasures of the flesh and a focus on the spiritual. Note that this is why the festivities may appear a little later than normal this year, with Easter Sunday falling on 16th April. Alternatively, for a less religious take, February festivities mark the end of winter and encourage the approach of warmer months.

There's nothing quite like taking part in one of the following festivals for yourself; the easiest way to plan a trip is with the help of our local experts. They'll organise your itinerary from start to finish so you can get on with enjoying the Carnival! Simply tell us where you want to travel and your dream trip can become a reality.

Widely considered the most famous carnival in the world, Rio de Janeiro's vibrant and colourful parades are well worth seeing. For Rio’s residents, music, dance, and drink are the main Carnival diversions. A Portuguese immigrant, José Nogueira Paredes (nicknamed Zé Pereira), is credited with originating the first Carnival club. One of his ideas was to get everybody in the club to play the same kind of drum, creating a powerful, unified sound. This technique became the basis for the modern samba school bateria, or percussion section.

One of the main contributions of the clubs to modern Carnival in Rio was the parade, complete with elaborate costumes, wheeled floats, and appropriate musical accompaniment. Parade themes stressed Bible stories, mythology, and literature.

But the undisputed centrepiece of any Rio de Janeiro Carnival is the main samba school parade, which takes place on Sunday and Monday nights. This is the most African of the Carnival events, due mainly to the popularity of the dance, which is a mix of European folk influences and African techniques. The parade was taken off the streets in 1984 when the Sambódromo, designed by Oscar Niemeyer, with a capacity for 58,825 people, was completed in a record nine months. Last year, part of the Sambódromo was used for the Olympic Games, hosting archery and athletics.

Rio is not the only Brazilian city with a tradition of fervent Carnival revelry. Many travellers prefer Carnival in the northeast’s coastal cities of Salvador and Recife, where non-stop street action is the highlight. Indeed, Salvador proclaims itself to be the biggest street party in the world, with around 2 million people taking part in the festivities.

The centerpiece of Carnival in Salvador (capital of Bahia state) is a glittering music festival on wheels called Trio Elétrico. It began in 1950 when a hillbilly singing act called Dodô and Osmar drove a beat-up convertible through the city during Carnival week playing pop and folk tunes. Instead of convertibles, Bahian musicians started using flat-bed trucks with flashing lights, streamers, and elaborate sound systems.

Oruro is best known for its carnival, La Diablada. Versions of this take place in various parts of South America, but is most famous in Bolivia. Ceremonies begin on Friday night, and at dawn on the Saturday, eager spectators take their places, huddling against the cold mountain winds. Soon the street vendors are out in force, selling cans of beer. By 10am the crowd is ready for the Devil Dance. Satan and Lucifer lead a procession of hundreds of dancing devils in fantastic outfits, leaping along the steep roads. Other dancers are dressed as pumas, monkeys or insects. The lead is soon taken by China Supay, the Devil's wife, who tries to seduce the Archangel Michael with her wiles.

Some dancers dress as Incas, in headdresses shaped like condors, while others appear as black slaves brought over by the Spaniards, clanking through the streets in chains. Bolivian girls in pink and black miniskirts bounce along, dancing with men dressed as giant white bears. The procession ends up at a football stadium, where dancers perform two masques. The first is a re-enactment of the Spanish Conquest, performed as a tragedy. In the second, Archangel Michael defeats the forces of evil with his flaming sword, taking on the devils and the Seven Deadly Sins.

Despite the Christian gloss over the proceedings, the Diablada is actually a pagan ceremony of thanks to Pachamama, "Earth Mother," to commemorate the struggle between the forces of good and evil. The conquering Spaniards were only able to convert the natives superficially; the Diablada survived and grew during colonial times as an expression of local people's frustration. 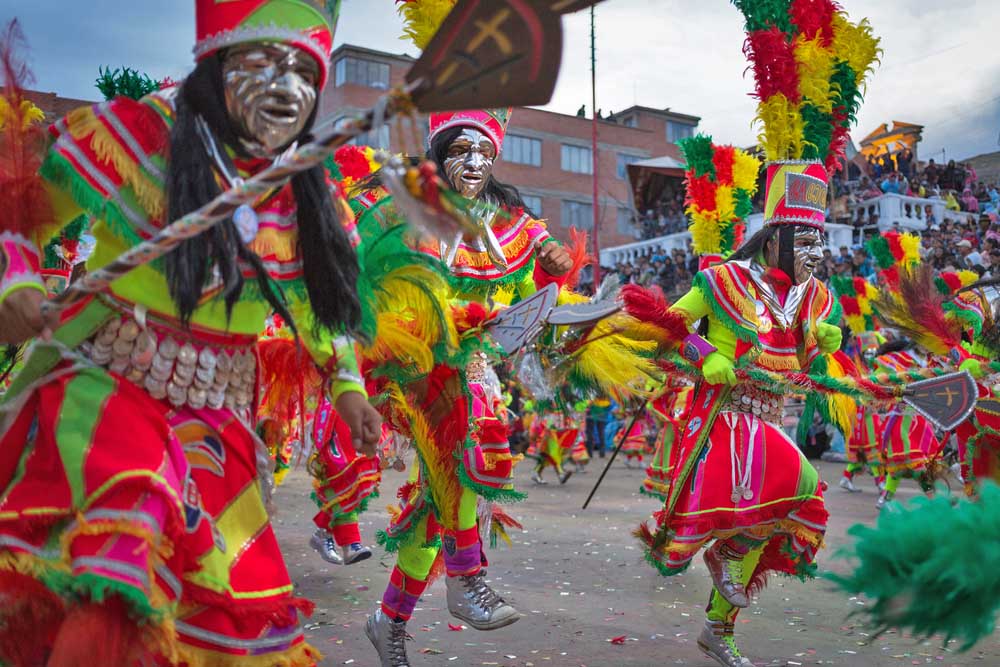 The Diablada Oruro Carnival in Bolivia is one of the best festivals in the world. Photo: Shutterstock

Neither age nor profession, nor money nor skin colour matter when, every year, thousands of Trinidadians and visitors seem to drown in a sea of colours, feathers, rhythm, and rum. From Jouvay, the wild street party that takes place from dawn on the Monday before Ash Wednesday, until King Momo’s death by fire in the last hours of Shrove Tuesday, Port of Spain is one big anarchic Carnival party. The heroes are soca stars and ingenious costume designers highly revered by a hip-swinging crowd dizzy with the beat and pulsating rhythm of the steel pans.

Trinidad hosts the biggest Caribbean Carnival, which originated out of the Christian tradition of having a last big feast before fasting during Lent.

If dancing along with the parade in the heat isn't your thing, try Quebec's winter festival, the Carnaval de Quebec. Canoe racing, dog sledding, snow sculptures and local cuisine are just some of the wintery delights that await revellers. Safe and pretty wholesome, this is also a great experience for families. Quebec Winter Carnaval is the world's largest winter festival and has been running since 1894, when it was decided that the French province needed a celebration before Lent during which to eat, drink and be merry. 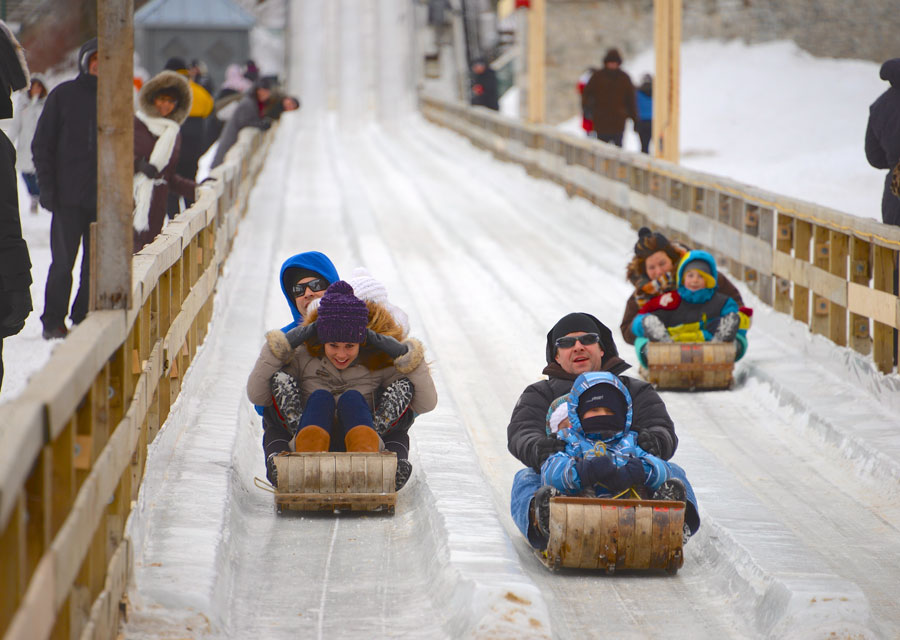 Every year Venice indulges in a masked ball lasting days – a Lententide “farewell to the flesh” – when a combination of poseurs and voyeurs come to wallow in the ghostly beauty of Venice as La Serenissima awakes to a whirl of colour, masks and costumes.

The Venetian carnival is the inheritor of a rich folk tradition, embracing pagan and Christian motifs. Linked to the winter solstice and fertility rites, such mid-winter folk festivals pre-date Christianity. According to pagan rites, winter was a force to be overcome, with the sun persuaded to return by a show of life at its most vital.

From Epiphany to Ash Wednesday, Sior Maschera, the masked reveller, reigns supreme. During the Republic’s official ceremonies, a strict order of precedence had to be observed, but carnival was a time for the breaking of social taboos: the mask makes everyone equal. The most traditional masks form a dramatic monochrome disguise, often harking back to periods of Venetian history or the dramatic tradition of the commedia dell’arte.

One high point of the festival is a grand masked ball, which has previously been held on the second Saturday of Carnival in La Fenice theatre. Revellers then move on to private parties or, in the case of celebrities, to the ball at the Cipriani across the water. Another big dance event takes place in Piazza San Marco (St Mark’s Square) on Shrove Tuesday. Themes change each year. In the past, the midnight fasting bell would ring out from San Francesco della Vigna, signalling an end to licence and the onset of atonement. The end is signalled when the effigy of Carnival is burnt on Piazza San Marco. 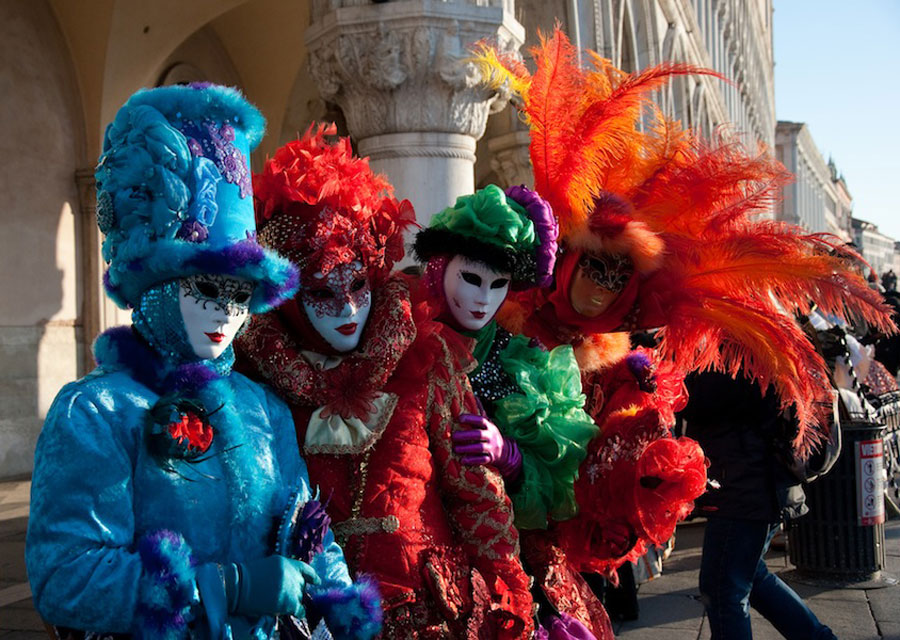 Binche is well known as Belgium’s carnival capital. For three days, the whole town becomes a hive of activity. The festivities follow a centuries-old tradition, with Shrove Tuesday providing the focus for the town’s revelry. This is the day when the “Gilles” dominate proceedings. Hundreds of men, born and brought up in Binche, gather at daybreak in costumes made of linen and decorated with heraldic lions. During these early hours, their heads are covered in white hoods, and their faces shielded by grand masks that display a painted moustache and green spectacles. What better to complete this ensemble than clogs upon their feet to dance a slow dance through the streets, maintaining steady rhythm. In the afternoon, the masks are exchanged for headgear of extravagant white ostrich feathers and the dancers balance a tall basket of oranges on one hand. Then, to the deafening accompaniment of violas, accordions, barrel organs and drums, they dance their way through the streets, transforming the medieval town into a vibrant flow of colour and noise.

The origins of this carnival can be traced back to the 14th century, and its importance to Binche is maintained to this day. In the weeks leading up to the carnival, fancy-dress balls are held as well.

The arrival of Lent is greeted in Cologne, the rest of the Rhineland and other Roman Catholic parts of Germany, with an outburst of merry-making equalled only by Mardi Gras in warmer climes. The fun starts on the evening of the Thursday before Ash Wednesday, when women in fancy dress roam the streets, harassing any men foolish enough to show themselves. The tempo of events reaches a climax the following Monday – Rosenmontag – with a monster parade through the streets. Presiding over the celebrations is His Dottiness the Prince, attended by a Peasant and a (usually rather masculine) Virgin and hordes of costumed revellers. Closing times at pubs are suspended for the duration of the festivities. By Ash Wednesday the participants are well prepared for their 40 days of abstinence. 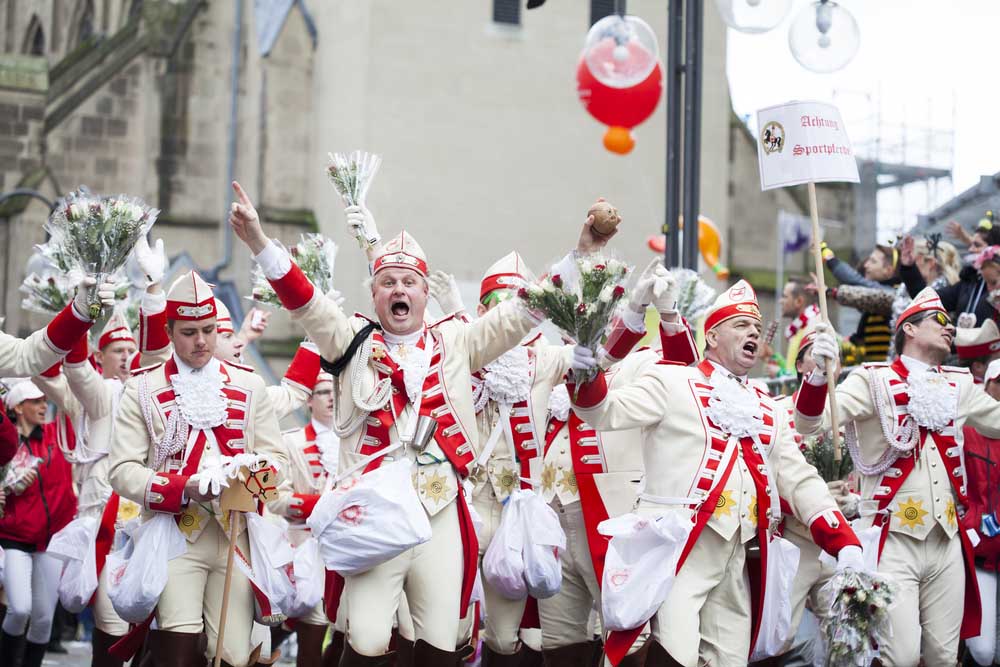 Experience raucous at the Rosenmontag Parade in Cologne this February. Photo: Shutterstock

Want to experience the fun and festivities of Carnival this February?