With its rich history, spectacular ruins recalling the majesty of ancient civilisations, and capital city Athens regarded as the birthplace of democracy, it's no surprise that Greece is home to an array of wonderful museums. Here is our selection of Greece’s best museums. 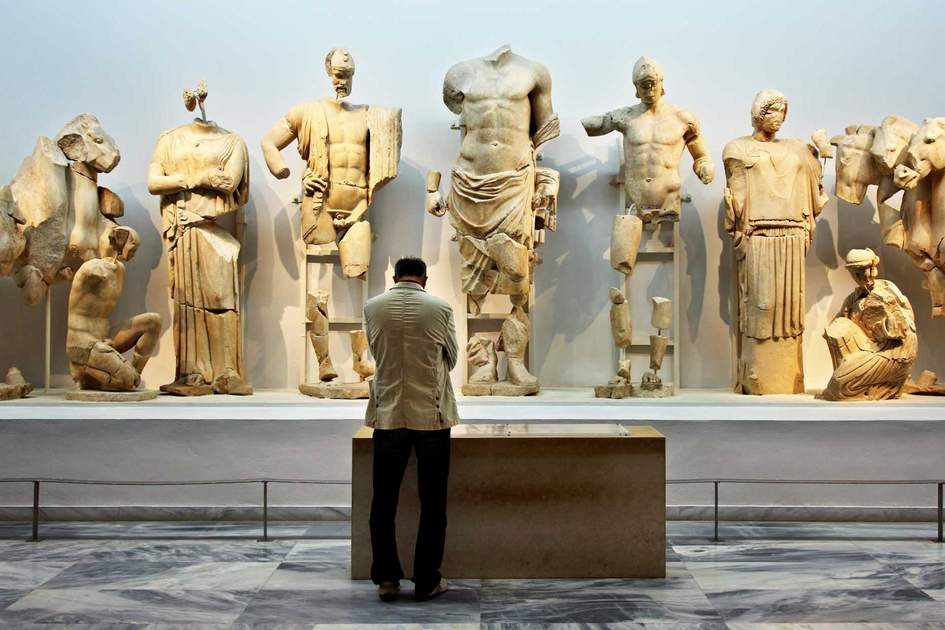 Temple of Zeus statues in the Archaeological Museum of Olympia. Photo: Shutterstock
PrevNext

Though designed functionally, the Acropolis Museum in Athens does justice to its extraordinary exhibits. The interior of the contemporary steel and glass building is laid out to mirror the experience of ascending the Parthenon’s various levels. A ramp – reproducing the approach to the Propylaia – leads up from the ground floor to an intermediate level, home to all the free-standing statuary, including the four original Caryatids still in Greece, revealing an archaic ideal of femininity in their earrings, tresses and close-fitting dresses. The top floor has been built to duplicate exactly the arrangement of the friezes on the Parthenon, clearly visible through windows – those originals that Greece retains pointedly abut plaster casts of the roughly 60 percent residing in the British Museum, with the clear implication that they ought to be returned. 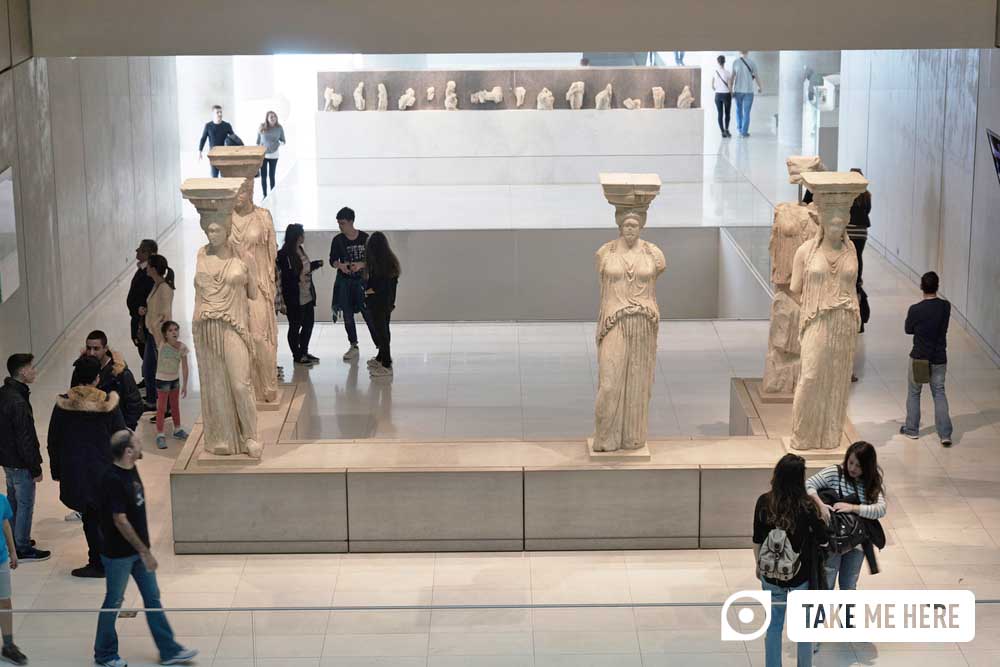 Occupying two attractive buildings – one old (1912) and one new (1987), the Archaeological Museum of Vathy contains one of the country’s best collections of the archaic era. It houses a range of exquisite small objects from the Hera sanctuary, culminating in an enormous kouros (statue of a man). There’s also a huge hoard of Byzantine gold coins found in 1984, as well as pottery, bronzes and clay figurines.

The Delphi Archaeological Museum houses a magnificent collection, which is spread across 14 rooms. The bronze charioteer of 470 BC with his onyx eyes is the most famous exhibit, but look out also for two huge 6th-century kouroi (standing statues of men), the votive, life-sized bull made from hammered silver sheets, the Ionic Sphinx of the Naxians, dating from 565 BC and the Siphian frieze, featuring scenes from the Trojan War and a battle between the gods and the titans.

You can tour Greece’s ancient sites, including Delphi, at a leisurely pace as part of Insight Guides’ Relaxing Discovery of Classical Greece trip. 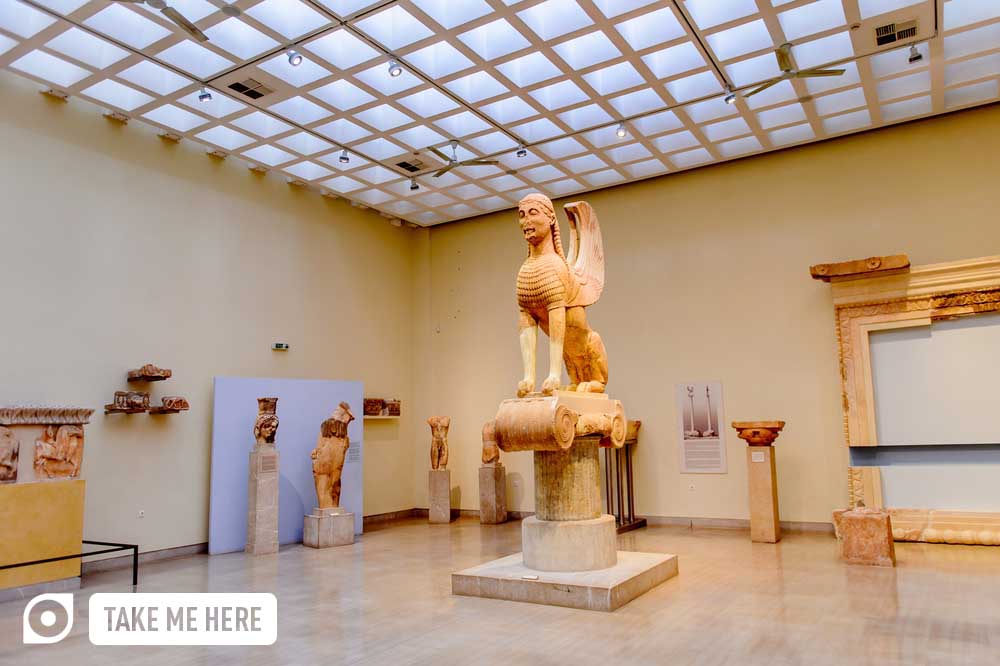 Highly eclectic but never less than top-drawer, the collection of the Corfu Museum of Asian Art was assembled by three keen Greek diplomats – embracing China, Afghanistan and everything in-between. Housed in the British-built Palace of Saints George and Michael, the museum's collection of almost 15,000 Asian artefacts is one of the most comprehensive collections of its kind in the world, encompassing Buddhist devotional art, Gandhara relief work, Chinese vases, Hindu deities and Japanese scrolls. The museum also hosts an excellent programme of temporary exhibitions.

Arguably Athens’ best museum, with exhibits spanning the whole of Greek history, the Benáki Museum is located at the northeast corner of the National Gardens. It houses a diverse collection of treasures from all periods – including jewellery, costumes, the recreated interiors of two rooms from a Kozáni mansion and two icons attributed to El Greco in the days when he was a Cretan painter called Doméniko Theotokópoulos. Beautifully laid-out galleries make this one of the most attractive museums in the city.

The Archaeological Museum of Olympia houses superb statuary and a fine collection of archaic bronzes, which make a visit here a must. Pride of place goes to the pediment reliefs recovered from the Zeus temple debris, which are on display in the central hall, depicting the battle between the Lapiths and the Centaurs, with the god Apollo at the centre of the composition. Other unmissable items include the Hermes and baby Dionysos of Praxiteles; the Geometric and Archaic bronze gallery, offering a gorgon shield ornament, a hammered relief of a mother griffon, various helmets and griffin heads as cauldron ornaments; and the painted terracotta of Zeus with Ganymede. 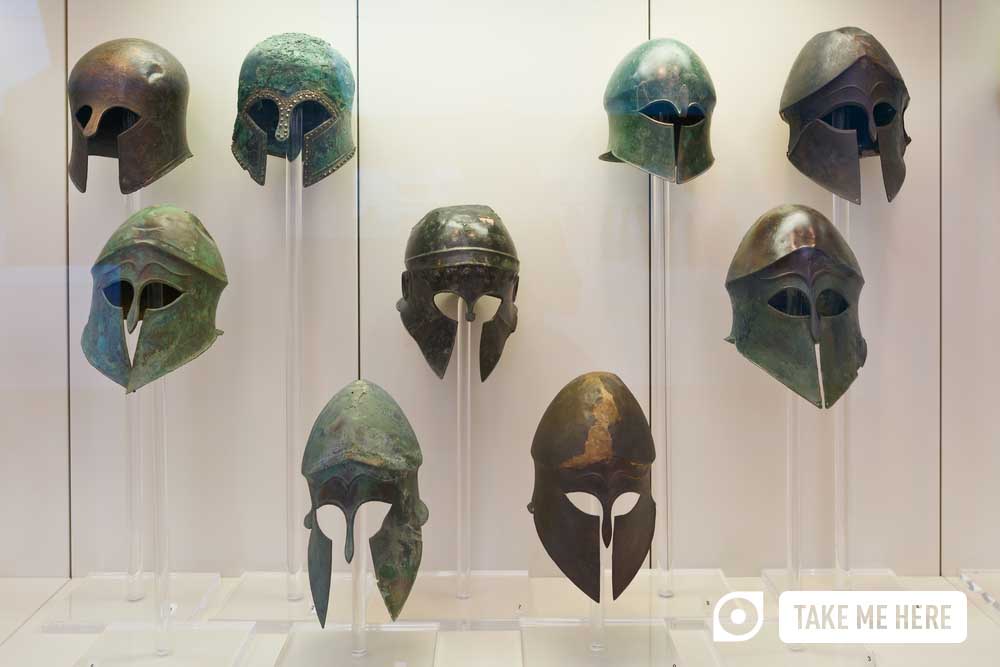 Helmets in the Archaeological Museum of Olympia. Photo: Shutterstock

Insight Guides can help you plan and book incredible cultural trips to Greece. Simply get in touch to let us know your ideas for the trip and when you would like to travel. Our local experts will then create an itinerary based on your preferences which you can amend until you're totally happy with every detail before you book. Our existing itineraries can offer inspiration, and all of our planned itineraries can be personalised to meet your specific needs.

The tour to Greece was a pleasant surprise for me! Perfect organisation, pleasant team, amazing landscapes and cultural sites!