How to explore the Shanghai Museum

Overlooking People’s Square, the Shanghai Museum houses artefacts spanning centuries of Chinese history. In a striking modern building, galleries house exquisite bronzes and jade, beautifully rendered sculpture and Chinese painting collections. Here is our guide on how to discover them. 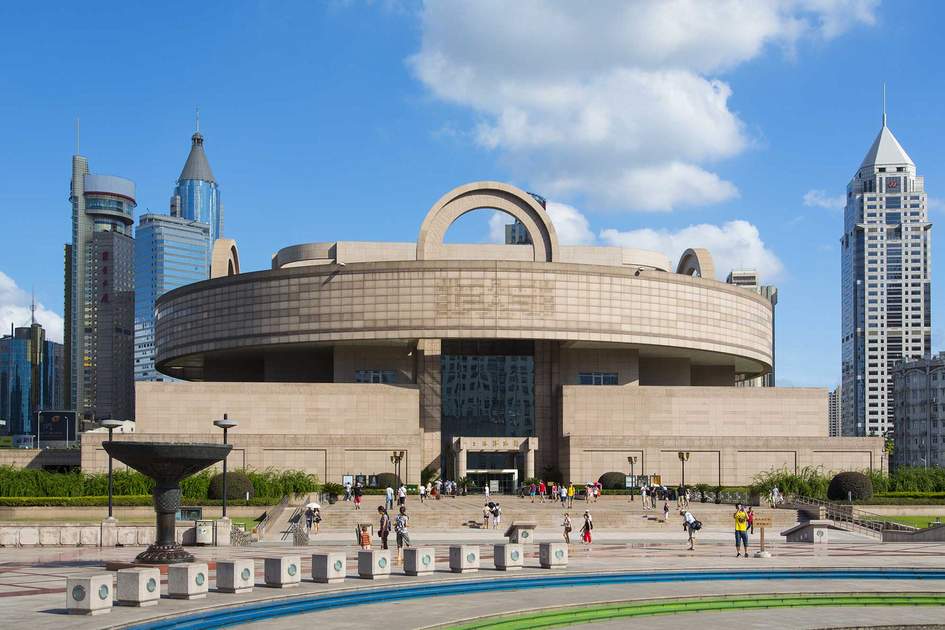 Ready to see the finest cultural attractions in Shanghai?

Our local experts can plan fascinating cultural trips for you in Shanghai. Simply get in touch, letting us know the dates you'd like to visit and your travel preferences. We will then create an itinerary for you, which you can amend so you are 100 per cent happy with every detail before you book. Browse our existing itineraries for inspiration, and remember, all of our planned itineraries are fully customisable – all you have to do is ask.

Laid out over four floors, the Shanghai Museum’s galleries display world-class collections of paintings, sculpture and finely crafted objects that make it one of the leading cultural attractions in Shanghai, if not the whole of China.

It is hard to match this exquisite curation of Chinese bronzes. Arguably the best and most complete collection in the world, it includes several rare pieces dating from China’s first dynasty, the Xia (21st–16th century BC). Highlights include a Shang dynasty square lei, or wine vessel, with finely-crafted dragons, and an enormous jian wine vessel, with four mythical creatures grasping the rim and peeking inside – taken from the tomb of King Fu Chai of the Wu Kingdom. Appreciate the cultural treasures of the Shanghai Museum, as part of Insight Guides' Complete China: Beijing, Xi’an and Shanghai trip.

This gallery displays beautifully rendered sculptures dating from the Warring States period through to the Ming dynasty, the majority of which are religiously themed. The Buddha sculptures reflect the artistic styles of the period, from the delicate, ethereal figures of the Northern Qi and Sui periods to the realistic depictions of the Tang dynasty and the Song dynasty's classical figures. 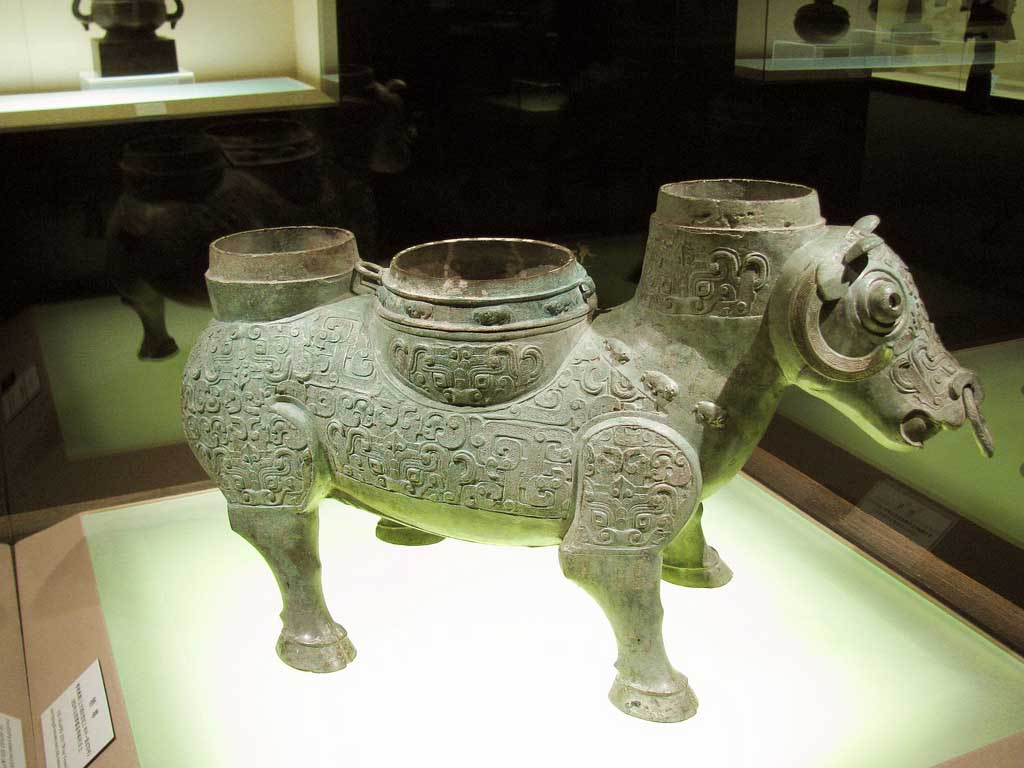 On the first floor, you can view fascinating Chinese ceramics dating from their origins in the Neolithic period through to the Qing dynasty. Especially beautiful are the delicate Tang dynasty Sancai ceramics with their three-colour glazes, and blue and white Ming and Qing pieces. The Zande Tower ceramic gallery, adjacent to the main ceramics exhibit, displays masterpieces from the Jin to the end of the Qing dynasty, many of which are Qing imperial ware. A visit to the Shanghai Museum can be a highlight of Insight Guides' The Best of China tour.

Head up to the second floor, to savour exhibits taken from the country’s largest collection of Chinese paintings. Highlights include Tang and Song dynasty album leaves and hand scrolls, masterpieces such as the Eight Noble Monks by Liang Kai and Misty River and Mountains by Wang Shen, as well as works by masters of the Yuan, Ming and Qing dynasties.

Exhibits in this gallery trace the development of this ancient form of brushstroke writing, from early inscriptions on tiny oracle bones to flowing Qing dynasty scripts. The chronological display shows the development of the art, featuring major styles and the works of the masters.

The world’s first gallery devoted to the Chinese seal displays 500 intricately carved seals from the museum’s collection of around 10,000. The seals, which cover the period from the Western Zhou to the Qing dynasty, served as signatures in ancient letters and contracts. Exhibits include pieces fashioned from amber, crystal, ivory and jade. You can savour beautiful cultural items in destinations around China as part of Insight Guides' Cultural China and Majestic Yangtze River Cruise tour. 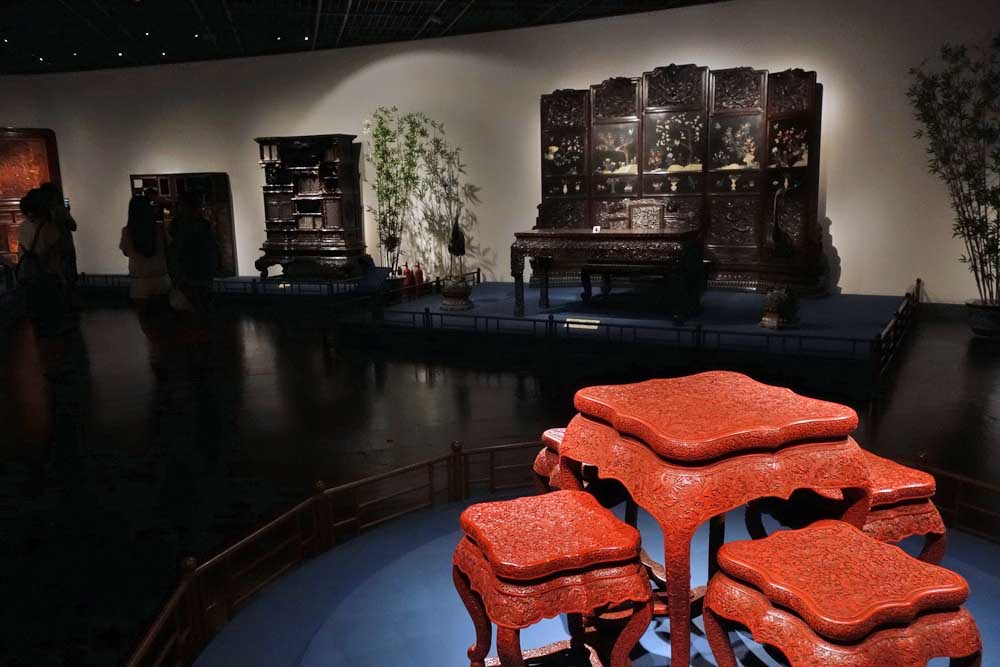 The furniture gallery showcases the spare, clean lines of Ming dynasty furniture, as well as the more baroque influence of the Qing era. It displays originals of much-imitated pieces, as well as offering an insight into the unique Chinese method of joining two pieces of wood, without using nails.

The museum’s impressive collection of jade features a display that runs from the Neolithic period to the Qing dynasty, with a range of jade objects originally used for ritual, burial or as ornamentation.

Showcasing more than 600 handicrafts from China’s many ethnic minorities: textiles, embroidery, metalware and sculpture, as well as lacquerware and pottery, this gallery also displays a stunning collection of wooden masks.

This gallery exhibits currencies used through the ages – from the shell money of the Neolithic period to the gold Persian coins from the Silk Road. There is also currency from the Concession-era banks.