The Maya is the most famous of Meso-America’s classical civilisations, with the name alone conjuring up images of gargantuan step pyramids, apocalyptic mythology and human sacrifice. Architecture was their greatest achievement and Mexico is among the best places in the world to experience it. 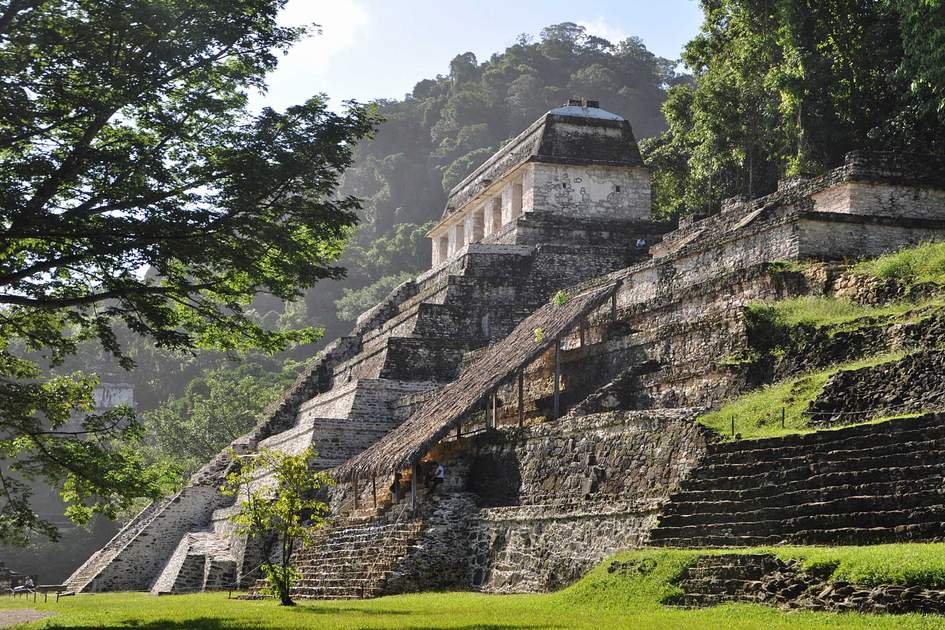 The history and culture of the Maya

The Maya civilisation flourished from around 2000 BC until AD 1697, when the Spanish conquered the last Mayan city, Nojpetén. At its peak, the Maya civilisation covered an expansive area which includes modern-day Guatemala and Belize, parts of Honduras and El Salvador, and a region of what is now Mexico – most notably the Yucatán peninsula. The Maya were pioneers in the arts, languages and mathematics, but their most striking legacy lies in the architecture of the ruined cities they left behind. Here, vast step pyramids, ceremonial ball courts, and intricate stone carvings paint a vivid picture of their society, intricate mythology, and their often gruesome religious rituals.

The greatest and most famous of all Mexico’s Maya ruins is Chichén Itzá, a stunningly well-preserved ruined city which was established around AD 300 and reached its peak in the 9th and 10th centuries. Many iconic hallmarks of Maya culture are in evidence here, including step pyramids, Meso-American ball game courts, and ornate stone carvings depicting scenes from Maya mythology and ritual human sacrifice.

The most famous structure at Chichén Itzá is El Castillo, a 30-metre-high step pyramid built as a temple to Kukulkan, a feathered serpent deity. With a total of 365 stairs, it is thought that the pyramid was designed with reference to the Maya calendar – a theory lent weight by a remarkable natural phenomenon which occurs here twice a year, on the spring and autumn equinoxes. When the afternoon sun hits the giant steps which make up the body of the structure, it casts a long shadow against the central staircase, resembling a giant serpent crawling down the pyramid. The shadow connects Kukulkan’s head, carved in stone at the bottom of the pyramid, with its tail at the top.

Also among Chichén Itzá’s ruins is the largest known of Meso-America’s ball courts, arenas for a mysterious sport known simply as the Meso-American ball game. Important to various pre-Columbian cultures for thousands of years, it’s thought that the ball game had rules similar to modern-day squash or racquetball – although an inspection of the Great Ball Court’s stone panels reveals these comparisons have their limits. Here, as at other ball courts in Mexico, carvings depict the ball game’s ritual associations with human sacrifice. Decapitation is a favourite theme – it has been suggested that severed heads were used as balls.

Chichén Itzá is the most developed Maya site for tourists in Mexico, and the easiest to visit, with frequent buses connecting it to towns and cities across Yucatán and beyond. There are a number of hotels in the nearby town of Pisté, and some more luxurious resorts closer to the ruins. These include Hacienda Chichen, which has its own gate to the ruins in its garden. 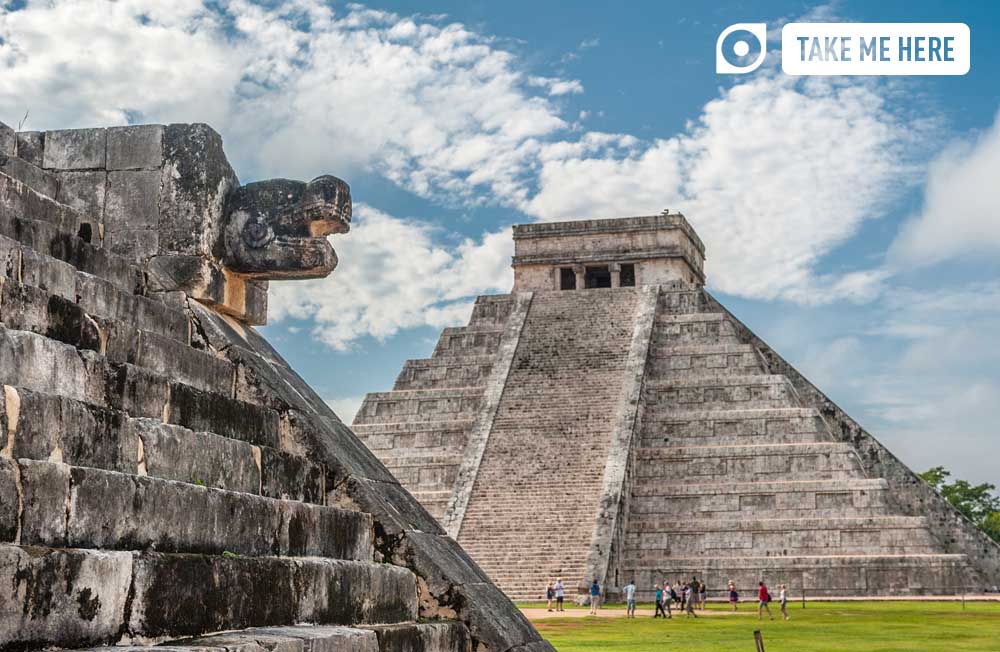 Rising out of the dense jungles of Chiapas, where howler monkeys call loudly from the trees, Palenque stakes a claim for the most spectacular setting of any of Mexico’s Maya ruins. Indeed, the majority of the city is thought to still lie engulfed by the surrounding jungle. Despite this, the secrets that Palenque has revealed to date include some of the finest examples of Maya craftsmanship and architectural ingenuity.

Many of these treasures are on display at Palenque’s museum, including a recreation of the tomb of Pakal the Great (AD 615–83). Pakal ruled Palenque for decades and oversaw many of the city’s ambitious architectural and artistic projects, so it’s fitting that his tomb should contain some of the site’s most beautiful artefacts, including his ornately carved sarcophagus lid. The carvings are centred around a world tree, the axis mundi of Maya mythology which connects the heavens, earth and underworld. Beneath that, Pakal is depicted at the moment of death, falling into the waiting jaws of a serpent at the gates of the underworld.

Palenque is not the largest or the oldest of Mexico’s ruins, but is celebrated for its setting, for the beauty of its buildings and artwork, and for the vivid picture it paints of Maya culture. A carved relief on the side of the Templo de la Cruz depicts a god of the underworld inhaling smoke through a tube – the oldest known depiction of a person smoking. Other carvings at Palenque reveal more about the Mayan fascination with human sacrifice. Some show the heads of captives held by their hair, their necks thrust towards a swinging axe; others depict Pakal holding ceremonial knives, used in ritual blood-letting, as an offering to the world tree.

Visits to Palenque offer the opportunity to explore the surrounding rainforest, and there are also two waterfalls nearby – the gorgeous Misol-Há, and the impressive Agua Azul cascades, both of which are wonderful places for swimming. 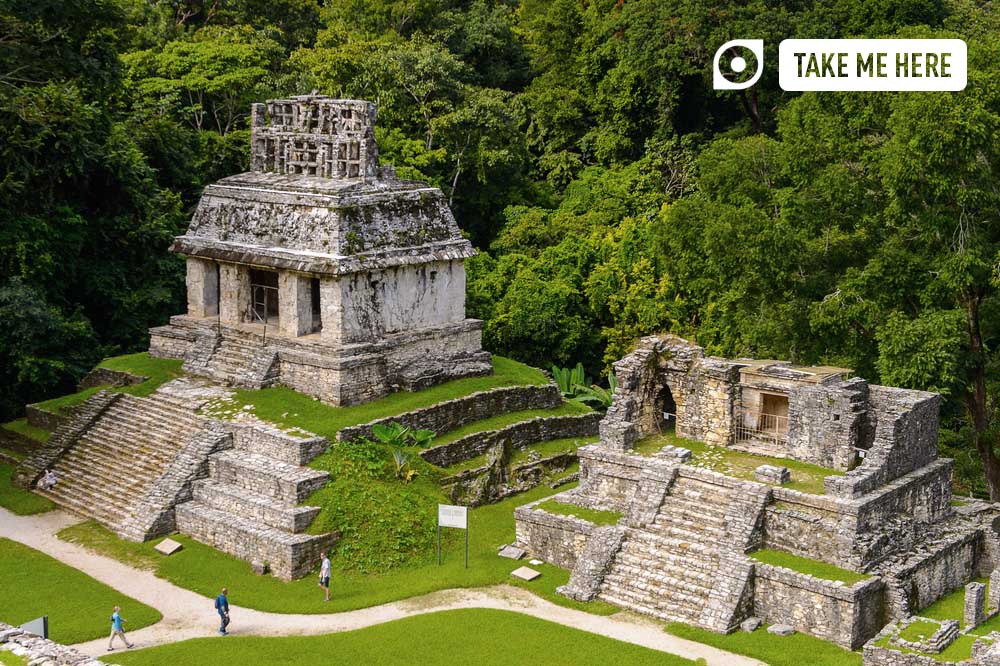 Tulum combines the poignant sight of crumbling Maya pyramids with the tropical backdrop of Mexico’s sparkling Caribbean coastline and waters. The ruins at Tulum are not as old as those at Chichén Itzá and Palenque, dating back to between the 13th and 15th centuries AD. As such, they offer a glimpse into the late period of Mayan civilisation, and into the brief collision of Maya culture with the colonising Spanish. A late carving at the Templo de las Pinturas, for example, depicts the rain god Chac seated on a four-legged animal, thought to represent the horses ridden by the invading conquistadors (horses had existed in the Americas thousands of years earlier, but had become extinct).

Another feature of the Tulum ruins is the depiction of the so-called Descending God, an enigmatic winged figure who, unusually, is depicted upside down, as if he is diving from the sky. He appears all over Tulum, but very rarely at other Maya sites; it is thought he might represent the bee god, reflecting the Maya fondness for honey, or the setting sun. Whatever the truth, his posture seems appropriate in a part of Mexico famous for its cenotes (sinkholes), which are perfect for cooling off after a walk around the ruins. This area is home to the finest cavern diving in the world, but swimming and snorkelling are also popular. The significance of the cenotes was not lost on the Maya, either. True to form, they believed them to be portals to the underworld, and human skulls and bones, jewellery, and masks of Maya gods have been found in the underwater caves, indicating a ritual purpose. 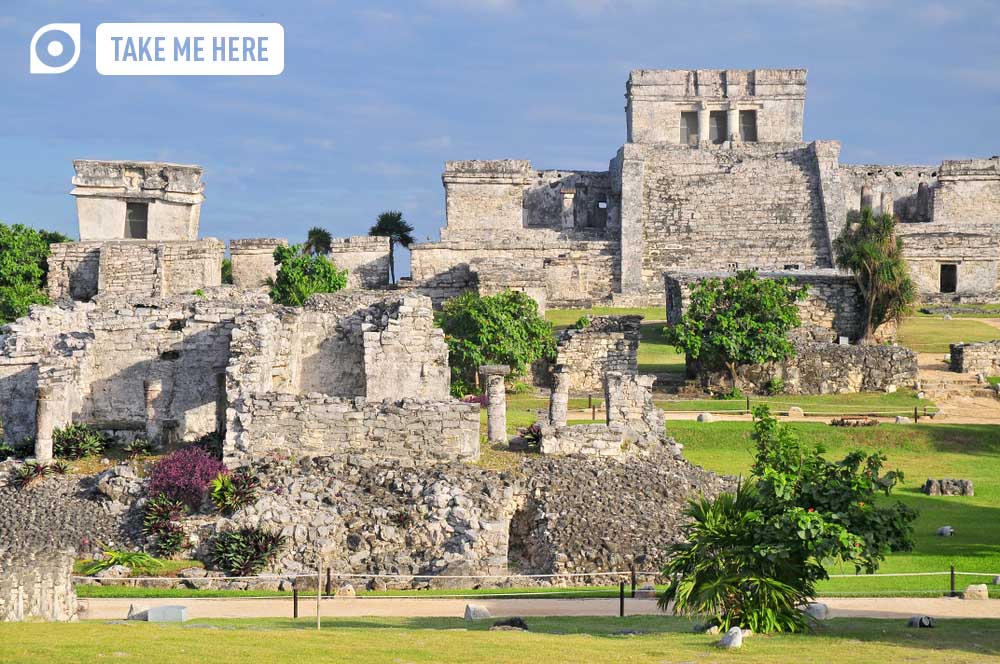 Our local experts can plan incredible trips to Mexico for you. To get started, simply get in touch letting us know when you'd like to travel and your ideas for the trip. We will then create a tailor-made itinerary especially for you, which you can amend until you are completely happy with every detail before you book. You can browse our existing itineraries for inspiration. And keep in mind that all of our pre-planned itineraries can be fully personalised to suit your needs.

We were first time users and they took great care of planning our trip through Mexico. The communication was superb and the tours and guides were of great quality. All our tours were very professional and took care of us. They were there every step of... Read more