Off the beaten track in Southern Myanmar

From ancient stupas to mesmerising scenery and a hospitable and friendly people, Myanmar is one of the world’s most exciting destinations. This sensational 10-day itinerary gets you off the beaten track to experience the very best of what southern Myanmar has to offer… 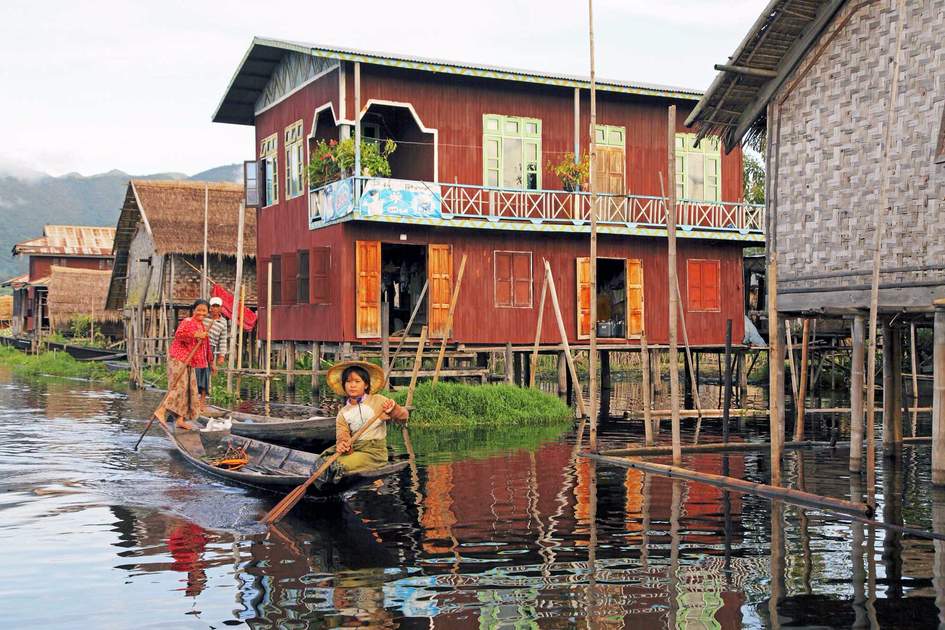 Myanmar – formerly Burma – is one of the most enigmatic countries in Southeast Asia. With democratic reforms steadily transforming the face of Myanmar, now is the perfect time to visit. Yangon (formerly Rangoon) may be sprouting skyscrapers, but parts of Myanmar still seem locked in a time warp. Many people live in dilapidated low-rise towns and villages made of mud brick and bamboo. This quirky, old-world atmosphere makes Myanmar a charismatic and vibrant place to travel. What are you waiting for?

Insight Guides can help you with planning, organising and booking your trip to Myanmar. Simply, get in touch and share your budget, interests and travel style. Our local experts will create an itinerary that is exclusive to you and your requirements, which you can then amend until it's just right. Alternatively, browse and modify ready-made holidays to create your dream trip today.

In Yangon, high-rises tower over ancient monuments in a city poised on the brink of sweeping change. As the biggest urban centre in Myanmar, Yangon is the natural starting point for any trip.

The glistening golden stupa of the Shwedagon Pagoda continues to dominate the city’s skyline. The massive pagoda is the perfect symbol of a country in which Buddhism pervades every aspect of life.

With the country on the cusp of rapid economic change, modernity is making its presence felt. This is evident around the striking Sule Pagoda, whose gilded profile is dwarfed by nearby skyscrapers. Yet the overriding impression of Yangon is of a place that has altered little over the last century. See it for yourself as part of Insight Guides’ Off the Beaten Track in Southern Myanmar tour.

Taking a domestic flight will take you to the city of Bagan. The area around Bagan – the ‘Bagan Archaeological Zone’ – contains the ruins of medieval Bagan. The ruins are spread over an area of roughly 50 sq km (26 sq miles) on the east bank of the Ayeyarwady River. Formerly inhabited by 50,000 to 200,000 people, the old city is now mostly deserted. The local population is confined to settlements on the peripheries. Consequently, the monuments are in a state of of charismatic isolation.

An estimated 2,200 temples, pagodas, monasteries and other religious structures rise from above the plains here.  These are said to be survivors from the crop of around 13,000 erected between 1057 and 1287. The spectacle of their towers and finials bristling from the table of flat scrubland is hypnotic. During winter mornings, river mist and cooking-fire smoke engulfs the brick  structures, glowing red in the first rays of daylight.

Enjoy a hot-air balloon ride over Bagan as part of Insight Guides' Off the Beaten Track in Southern Myanmar trip. You’ll also have the change to visit a village lacquer workshop and the archaeological museum 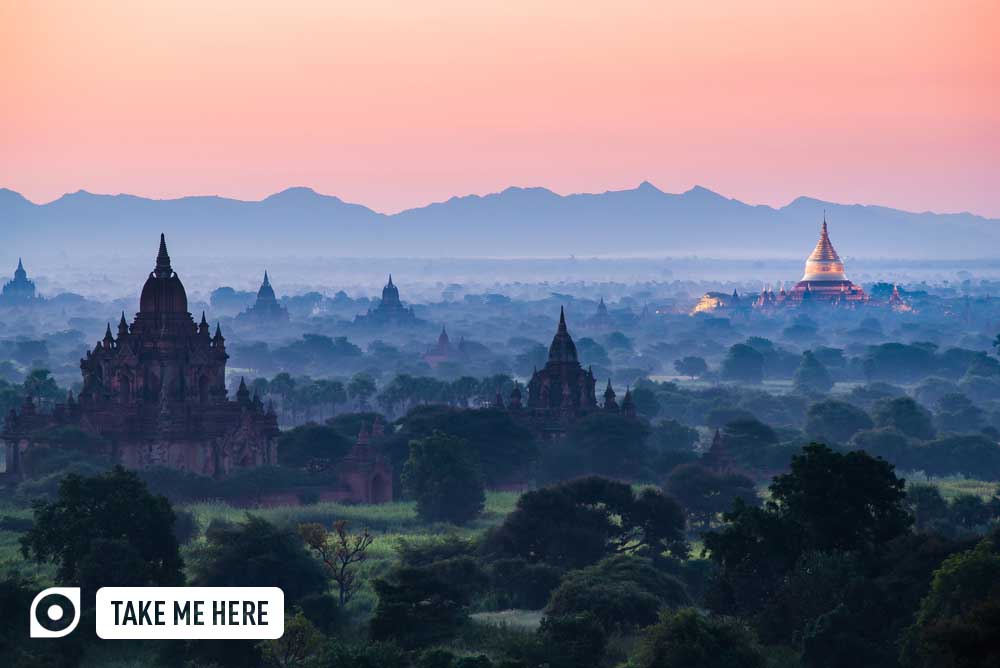 The temples of Bagan at sunrise. Photo: Shutterstock

A short domestic flight to Inle Lake is a must. The cooler climate and picturesque setting in the lap of the Shah Hills make Inle Lake a delight. Enjoy leisurely sojourns gazing from your hotel hotel verandahs across the water. Take boat trips to ruined stupas, hot springs and the stilted villages of the local Intha people. The Intha provide  Inle’s defining image, that of the local ‘leg-rowing’ fishermen. They propel themselves across the lake’s surface, using one leg, wrapped around an oar.

Be sure to visit the Intha’s ‘floating gardens’, or kyunpaw. They made by collecting weeds from the surface and lashing them together to form metre-thick strips. These are then anchored to the bed of the lake with bamboo poles, and heaped with mud scooped from the bottom. Crops – including cauliflower, tomatoes, cucumbers, cabbage, peas, beans and aubergine – are grown year-round. By booking on to Insight Guides’ Mesmerising Myanmar trip, you can also enjoy a meal on the lake.

Day 5 necessitates a return to Yangon. Try to see the reclining Buddha Chauk Htat Gyi, as well as the stunning Karaweik Hall. Both stops are included on the Off the Beaten Track in Southern Myanmar trip. The Chaukhtatgyi Pagoda is not a pagoda in a tradition sense. It is more of a pavilion housing a colossal, 70-metre (230ft) reclining Buddha Chauk Htat Gyi. Elsewhere in the pagoda enclosure is a centre devoted to the study of sacred Buddhist manuscripts. The 600 monks who live in the monastery annex spend their days meditating and studying the old Pali texts.

Karaweik Hall is a palace in Bogyoke Aung San Park, located on the eastern shore of Kandawgyi Lake. Constructed in the early 1970s, the structure replicates a pyigyimun, or royal barge. Burma’s kings and queens once used barges for royal occasions. It’s actually a building rather than a boat, contrary to appearances. Its double bow depicts the mythological karaweik, a water bird from Indian prehistory. It also features a multi-tiered pagoda on top.

It’s about a 50km (30-mile) drive from Yangon to Bago. You can visit Bago by booking onto Myanmar’s Ancient Treasures route. Bago retains a large concentration of temples, pagodas and giant Buddha statues for a town of its size. This is a legacy of its former prominence as Myanmar’s capital. It was also a major port under the Taungoo dynasty during parts of the 16th and 17th centuries. Most of these great religious monuments have been painstakingly maintained or restored. Gold leaf and modern paints are often used, making them seem considerably less ancient than they are. The majority of temples are in, or within easy reach of, the town centre. You can comfortably get around them by trishaw or rented bicycle.

Continue to Kyaiktiyo, one of Myanmar’s most renowned religious sites. The iconic pagoda – also known as Golden Rock – sits atop a granite boulder. According to legend, the Kyaiktiyo Pagoda was founded in the 11th century by King Tissa. He founded it to enshrine a hair of the Budha he had been given by a holy man, on the condition that he install it on a rock the shape of his head. This the king was able to do thanks to his supernatural powers – along with the help of Thagyamin, king of the nat, who directed him to a suitable rock on the sea bed. This was then transferred by boat to the foot of a holy mountain. The legendary boat used to carry the boulder eventually turned into stone. 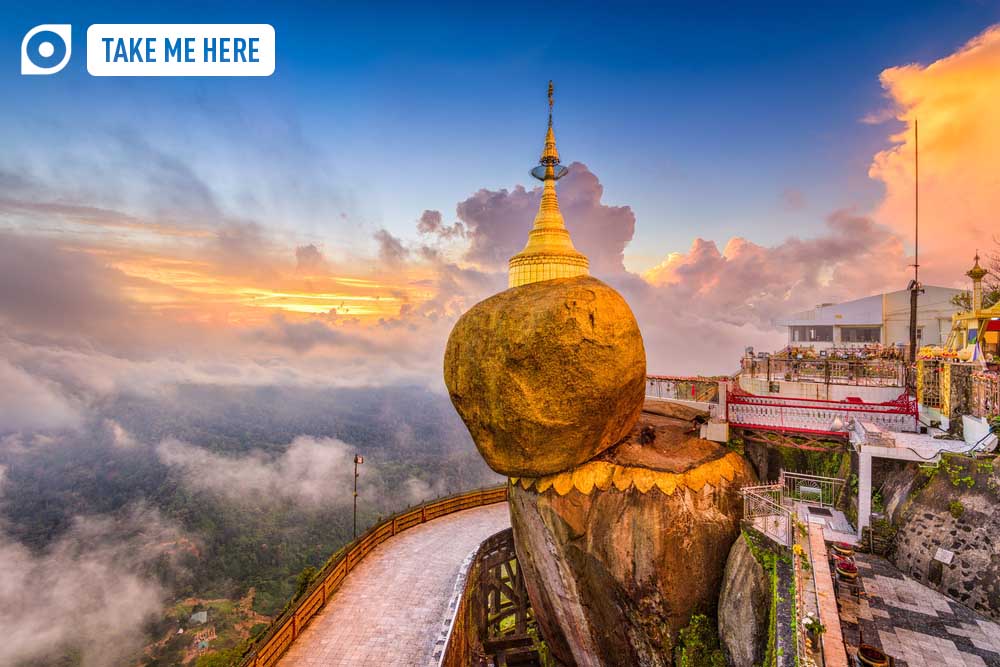 Also accessed by car, Hpa-an is an easy-going, un-congested state capital. It has a lively riverfront and market area, and a mostly Karen population of 50,000. Also well worth exploring are the nearby limestone caves of Bayinnyi and Kawgun. Visit them en route as part of Insight Guides’ Off The Beaten Track in Southern Myanmar trip.

The countryside around Hpa-an is spectacular. It is covered with outcrops of towering, jungle-draped limestone similar to those of Guilin in southern China. The highest of these is Mount Zwegabin (732 metres/2,373ft). Its distinctive profile soars out of the paddy fields around Hpa-an like a vision from the lost world.  Visit Lake Kantharyar, which boasts wonderful views of Mount Zwegabin in the distance.

We also recommend visiting the Cultural Museum of Karen and the Shweyinhmyaw Pagoda. The infamous Burma-Siam Death Railway and Allied War Cemetery are also nearby, at Thanbyuzayat.

The Mon capital of Mawlamyine (Moulmein) is a superbly atmospheric relic of colonial rule. It has heaps of old-world atmosphere and a bumper crop of monuments to discover. These include the world’s largest reclining Buddha at nearby Win Sein Taw Ya. Take in the best sights with Insight Guides' Off The Beaten Track in Southern Myanmar trip. Continue to to Bilu Island. The rice-paddies, rural villages and pristine beaches form and idyllic and glittering landscape. After immersing yourself in a unique culture, it’s time to head back to Yangon for the return flight home.

Everything happened when and as promised. With this being the New Year holiday the guides had some difficulty in regards to restaurants and some sights being open but the worked around it and made a very enjoyable

Amazing sights all around the country.