9 things to do in NYC that only locals know about

Travelling to NYC? We'll let you in on a little secret... We've gathered the best experiences and things to do that we reckon only locals know about. How many will you tick off on your trip? 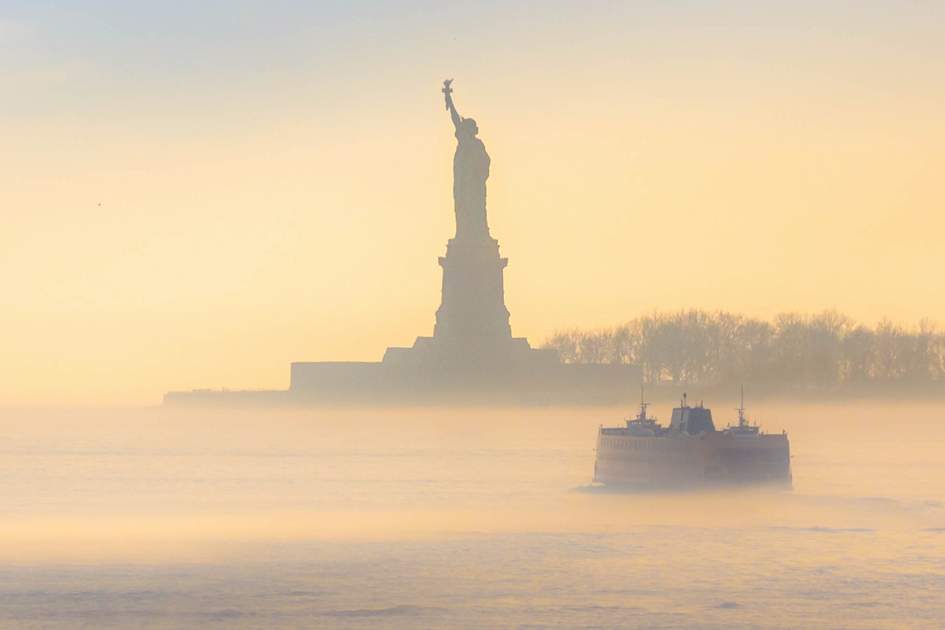 Staten Island Ferry cruises past the Statue of Liberty on a misty morning. Photo: Shutterstock

We felt it was time you started experiencing destinations like a true local: enter our new Experience travel guides. To celebrate, we thought we'd give you a sneak peek at how to see New York City like a local

Try to get a table at the exclusive Waverly Inn. Owned by Vanity Fair editor Graydon Carter, this uber-hip restaurant has pulled in media moguls, Hollywood stars, and other assorted A-listers since it opened several years ago. It can be tough to get a reservation – there’s no phone, and front-of house management is discerning. Instead, try getting a seat at the small bar when the restaurant opens at 6pm, or past 11pm when the dinner crowds begin to thin. Be warned, the drinks are not cheap.

To get a great view of the Statue of Liberty from the water, avoid the long line-ups for the tourist ferries in Battery Park, and join New York commuters further south on the Staten Island ferry. The 25-minute cruise to Staten Island not only offers great views of the Statue of Liberty, the New York Harbor, and the city skyline, but it is also free, making it the best bargain in town (try to catch one of the old orange boats if you can as these have open decks). Staten Island Ferry Terminal, 1 Whitehall St; www.siferry.com; departs every 20–30 mins, less frequently at off-peak times and weekends.

Climb the metal staircase from the street below onto this magical elevated green promenade that cuts its path along an old railway line. It’s a really cool walk that cuts an aerial swath through the heart of Chelsea, between Tenth and Eleventh avenues all the way from Gansevoort Street to 34th Street. Along your route expect to encounter fountains, patches of greenery (some cultivated from the wild plants that took root on the abandoned tracks), sun loungers and benches, and many chilled out New Yorkers.

Pick up your copy of Insight Guides: Experience New York today. Written by local experts on the ground, it's packed with new ways to discover the world-famous city 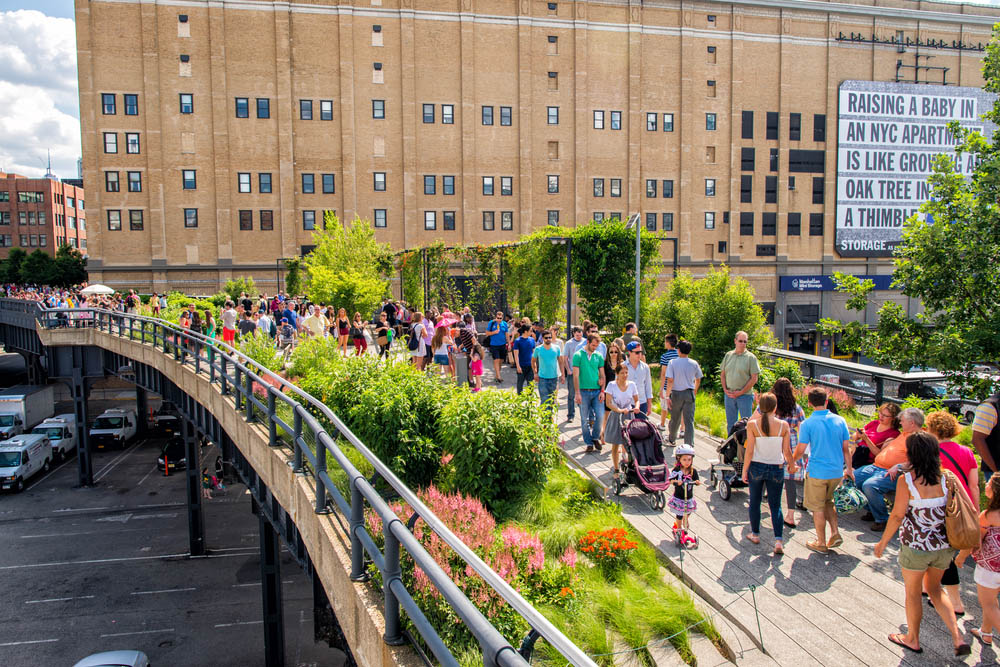 On the Upper West Side, Riverside Park follows the Hudson River for almost 4 miles. You can plant yourself on a shady lawn for a picnic, or find refreshment at the park’s riverside cafes at 70th Street, next to a pier where outdoor films are screened on Wednesday evenings at 8pm; at 79th Street, above the Boat Basin; and at 105th Street. On the Upper East Side, a long pier is a breezy riverside perch at 107th Street, and Eli’s Vinegar Factory (431 E. 91st St, tel: 212-987-0885), supplies prepared meals for a picnic in Carl Schurz Park, on the river at 86th Street.

5. Get cultural in MoMa

While you don’t have to be a New Yorker to know about this one, it’s so special we had to include it. The Museum of Modern Art (MoMa) houses a collection of 150,000 paintings, sculptures, photographs, and other works, displayed in crisp contemporary galleries on West 53rd Street. Stepping off the busy Midtown avenues to stand in front of Picasso’s Les Demoiselles d’Avignon or Rousseau’s The Sleeping Gypsy is one of the city’s most transporting experiences. MoMA, West 53rd St; tel: 212-708-9400; www.moma.org; Sat–Tue 10.30am– 5.30pm, Thu 10.30am–5.30pm (Jul–Aug until 8.45pm in July and Aug), Fri 10.30am–8pm, free on Fri evenings. 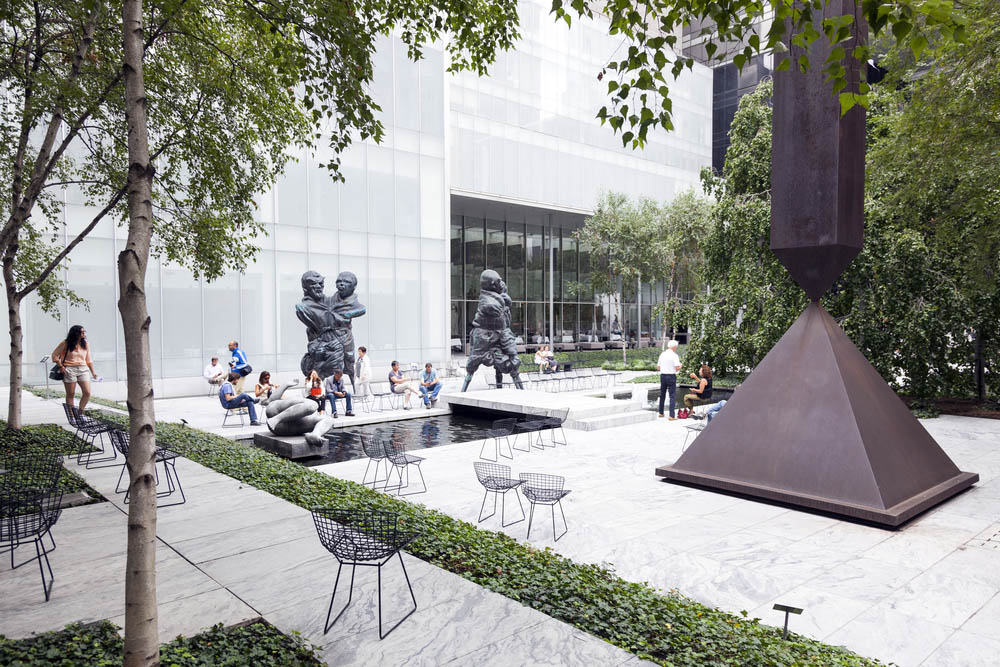 6. Catch a show at LaMaMa

La MaMa (74A E. 4th St, tel: 212-475-7710, www.lamama.org) has been presenting original performance pieces from around the world for almost 50 years, establishing itself as the beachhead of experimental theaters and a major force in presenting works by new playwrights.

7. Drink in an historic bar

Open since the mid 1850s, McSorley’s Old Ale House is the oldest Irish tavern in the city, and it feels like it with its sawdust floor, worn wood doors, and walls covered with yellowing newspaper clippings and artwork including a wanted poster for Lincoln’s assassin. Everyone from Teddy Roosevelt to John Lennon has been here at some point, and it still packs in a crowd. Drinking here doesn’t require much thought: there are just two types of ale, light and dark, that come in cute half-pint mugs. For more on New York nightlife, read our feature here.

Hit H&H off Broadway for one of their legendary bagels. Said to be ‘Like no other bagel in the world’ by aficionados (526 Columbus Ave at W. 86th St), the bagels here offer the exact right amount of chewiness and freshness; you can buy just one, but you’ll wish you’d ordered a dozen. 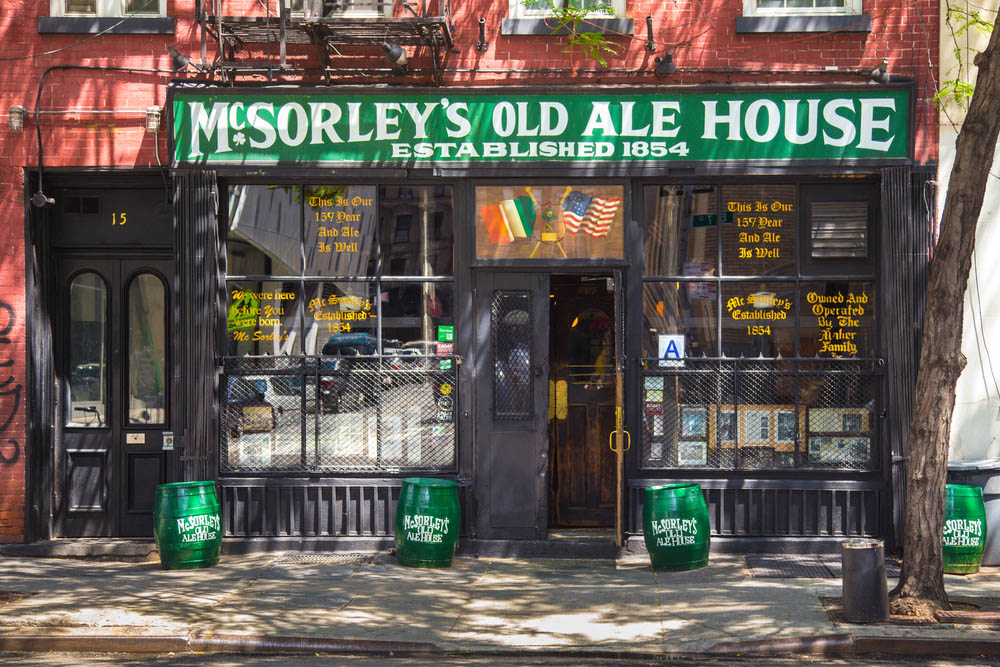 Wondering where to go in New York City? Here's an introduction to the Big Apple

Manhattan's skyline features as one of six of the best views in the USA. How many have you seen?

Unsurprisingly NYC features as one of 20 most Instagrammable places in the world. How many have you photographed?

Who fancies a pint of the good stuff? Best city breaks for beer-lovers, featuring Brooklyn