Take a Titanic tour of Belfast 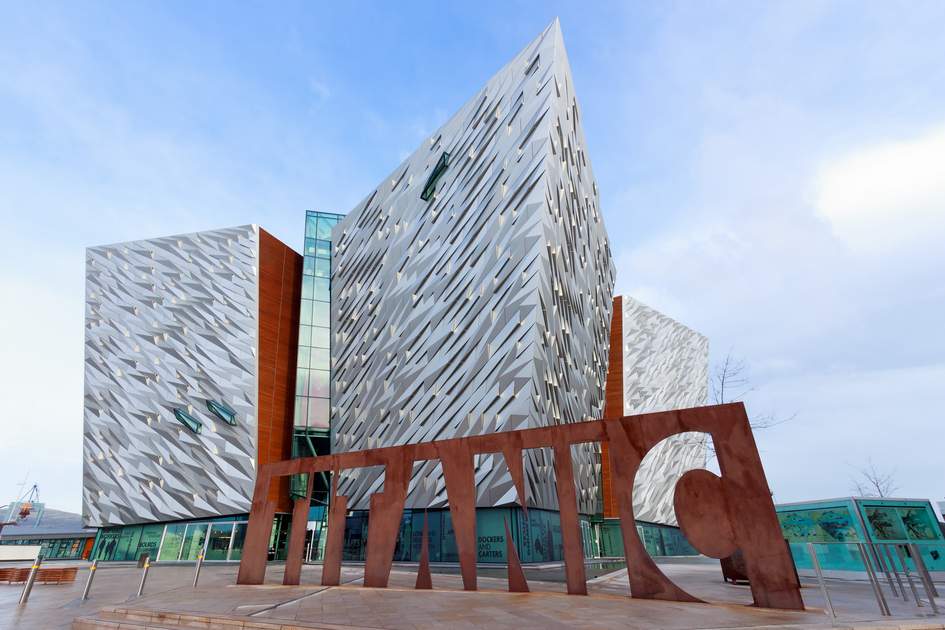 Despite its sad watery fate in 1912, Titanic was a remarkable feat of Edwardian engineering – innovative, superbly crafted and built on an extraordinary scale. It was, in other words, an appropriate and easily identifiable symbol of Belfast’s pre-eminence as a shipbuilder. By the time City Hall was built in 1906, the city was not only one of the world’s greatest ports but also a world leader in rope making, tobacco and other industries. Titanic was thus built at the apex of Belfast’s ambition, belief and sense of self-importance. Designed and built in the city between 1909 and 1912 and waved off on her maiden voyage on 2 April 1912, she was the most luxuriously appointed ship ever seen, the pride and joy of shipbuilders Harland and Wolff.

More than 100 years on, there are those among the more sceptical local people who question the wisdom of Belfast identifying itself ever more closely with a ship famous for sinking on its maiden voyage. Such voices of dissent carry little weight these days – this city is very proud of its associations with the greatest liner ever built and for the centennial commemorations in 2012 it unveiled the spectacular Titanic Belfast Visitor Centre. A major annual festival called ‘Titanic: Made in Belfast’ is also firmly established on the city’s calendar of events every April. The Titanic Quarter, a £1-billion mini-city of apartments, hotels, restaurants, bars and visitor attractions on 185 acres (75 hectares) of the former shipyard where the legendary liner was born, is dedicated, as the name suggests, to this amazing ship.

The natural starting point for a tour of this area is the Titanic Belfast Visitor Centre on Queen's Road, opened in 2012 to commemorate the 100th anniversary of the liner's sinking. The building's startling six-storey bow-shaped façade reflects the lines of the ship and contains 3,000 different shaped panels folded from aluminium sheets into asymmetrical geometries. Framed by 'Titanica', a life-size female sculpted by Rowan Gillespie, and a giant 15-tonTitanic sign, the entrance plaza is embedded with the world's largest map dotted with LED lights that track the route taken byTitanic. Inside, nine interpretative galleries outline the dramatic story as well as the wider theme of Belfast's seafaring and maritime heritage. Wander through Titanic Belfast and you will discover the story of the thriving boomtown of the early 20th century. For your very own Kate Winslet moment, pose on the replica of the ship's magnificent staircase that leads up to the Astor Banqueting Suite, but make sure you check the website in advance as this is only open to the public on selected dates. Tours of the centre are self-guided.

Farther along Queen's Road another atmospheric attraction is the 900-ft. long Titanic's Dock where the liner was built. In its time the dock was the biggest in the world and is now open to the public, ranking alongside the Titanic centre as Northern Ireland's leading attraction. Since spring 2012, Titanic's Dock – officially known as the Thompson Dry Dock – has been accessible to visitors. Steps take you down 44ft. to the floor where you can capture the spirit of the ship's physical footprint. To access the dock and the Edwardian pump house, you must join a guided tour run by Colin Cobb.

Right beside the visitor centre is the SS Nomadic, tender ship to Titanic – known as her 'little sister' – and the last White Star Line ship in existence. It operated as a shuttle ship delivering 142 first-class passengers to Titanic in Cherbourg before she set sail across the Atlantic. After a £9 million refit Nomadic opened to the public in summer 2013 as another piece in the lucrative Titanic tourist trail. Although just a quarter the size of its illustrious 'sister', it is the most significant piece of Titanic heritage that is not at the bottom of the sea. From 1911 to 1968, it was a working vessel. Interpretative galleries and interactive displays bring alive what it was like for the workers and passengers. The ship is berthed at the Hamilton Graving Dock which has also been restored.

The two massive yellow gantry cranes, named Samson and Goliath by all but post-feminists who have rechristened the latter Delilah, dominate the eastern skyline over the Harland and Wolff shipyards at Queen’s Island. Today the main work of the yard is in ship repair and maintenance.

• The launch took 62 seconds to complete.

• There were 29 boilers on board and her forward anchor weighed nearly 16 tons.

• More than 3 million rivets were used in the building of the ship.

• She had 5 miles (8km) of decks, squash courts, and was the first vessel to have a heated swimming pool.

• First-class passengers paid a whopping $4,350 for a parlour suite ticket.

• The largest percentage of survivors were first-class passengers.

Text taken from the forthcoming new edition of Great Breaks: Belfast, due for publication in spring 2014.

I had a really great time through Rough Guides. They helped me plan a two week trip to Wales. I provided places I wanted to stay/see, and they reserved the rental car and all lodging. Yana and Marcela were so helpful!

I had a really great time through Rough Guides. They helped me plan a two week trip to Wales. I provided places I wanted to stay/see, and they reserved the rental car and all lodging. Yana and Marcela were so helpful!