Unmissable eco-adventures for your Philippines vacation

Home to coconut palm-fringed beaches, lush jungles, and miles of sapphire ocean, you don't have to travel far in the Philippines for a postcard-perfect view. Yet this archipelago is more than just pretty to look at. 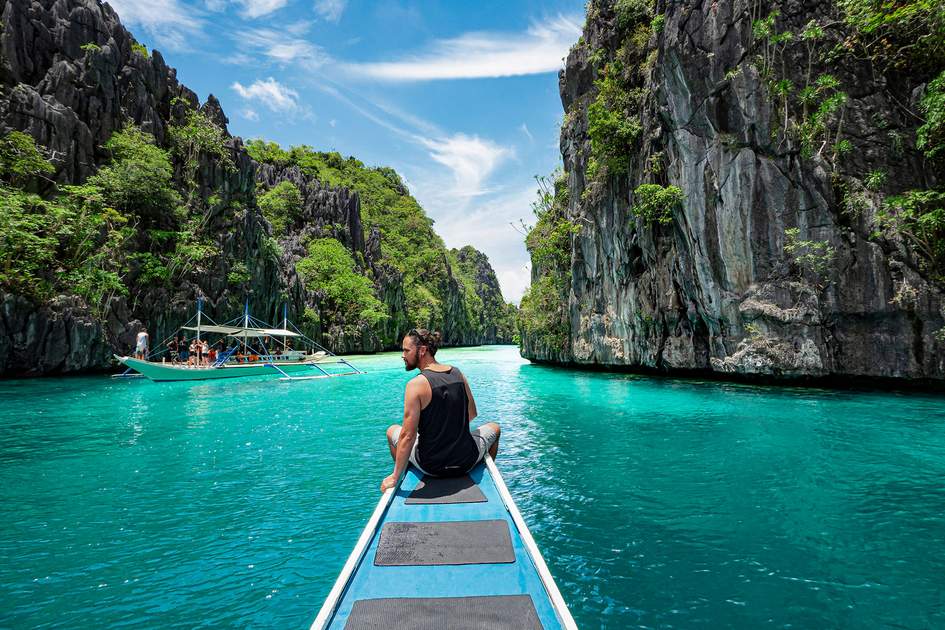 Its natural environments are integral to local livelihoods, ancient traditions, and unique wildlife you won’t find anywhere else on Earth.

To protect this, the Philippines is dedicated to a greener future. Almost half of its total energy use comes from renewable sources, with Asia’s highest concentration of geothermal power.

Beaches like Boracay have famously closed for temporary stints, in order to recover from over-tourism. And to combat illegal wildlife activity, local groups have kickstarted initiatives that serve to educate visitors and fund conservation efforts.

As a traveler, participating in eco-tourism is one of the best ways you can support these efforts. Check out these unmissable eco-adventures to make your Philippines trip a sustainable one.

The banks of Bohol’s Abatan river glimmer with the golden glow of pteroptyx macdermotti. This is one of the world’s rarest species of firefly, endemic to the mangrove forests that they light up like Christmas trees.

However, they are under threat from the use of tourist motorboats. The boats rip through the river and destroy their nests along the riverbank.

Kayakasia Philippines runs conservation kayak tours, where profit is invested into protecting the fireflies’ habitat. The organization also hires the children of local fishermen as guides. Atop a salary, Kayakasia has sent several alumni to college, creating social mobility within the community.

The tour will set you back 1,950 pesos ($36) per person. You’ll find their office just under five miles from Taglibaran. Once there, you’ll quietly paddle into the abyss of night, the stars (and fireflies) lighting the way. 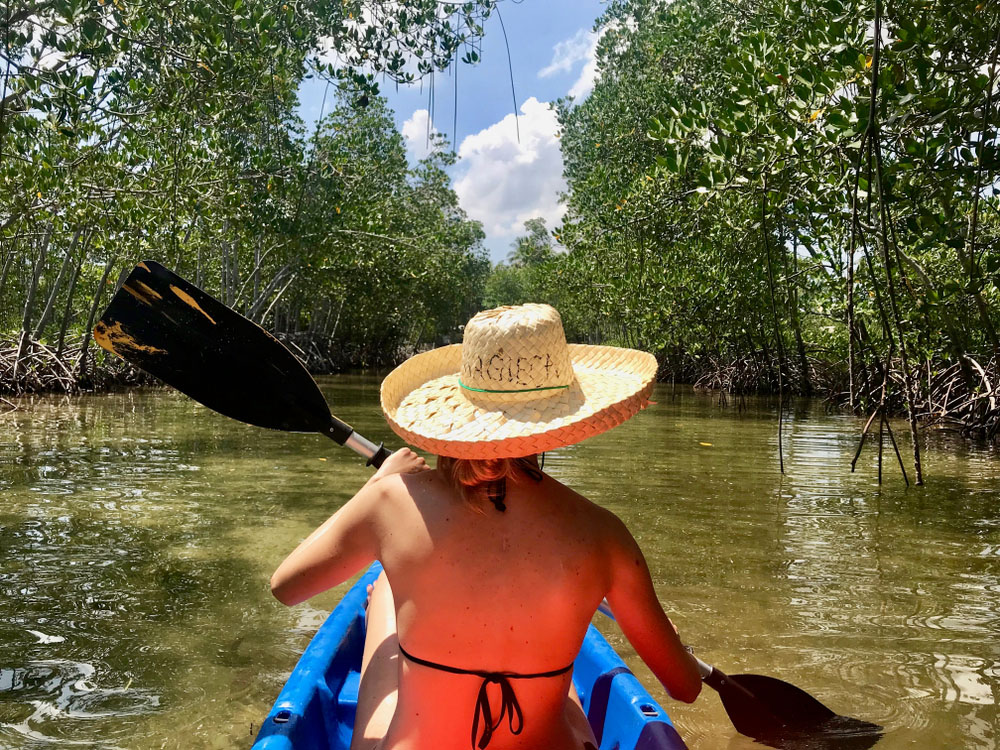 Over thousands of years, the Ifugao tribe carved 48 of these striking terraces - by hand - along the contours of the Cordilleras mountain range. Millennia later the system is still in use, regarded as a lasting marvel of ancient farming.

The Batad Rice Terraces are among the most impressive and well-preserved, recognised as a UNESCO World Heritage Site. They also feature in The Avengers: Infinity War, with a certain purple supervillain finding solace inside a traditional nipa hut.

Curved like an emerald amphitheater, the terraces are best experienced with time on your side. Look into booking a local homestay.

To get here, it’s a nine-hour drive north from Manila to Banaue (which also has its own, more famous rice terraces⁠—but the extra hour’s motorbike ride to Batad is worth it for the solitude).

Hire a local guide for 1,900 pesos ($35), as the area can only be explored by foot along the narrow terrace walls. 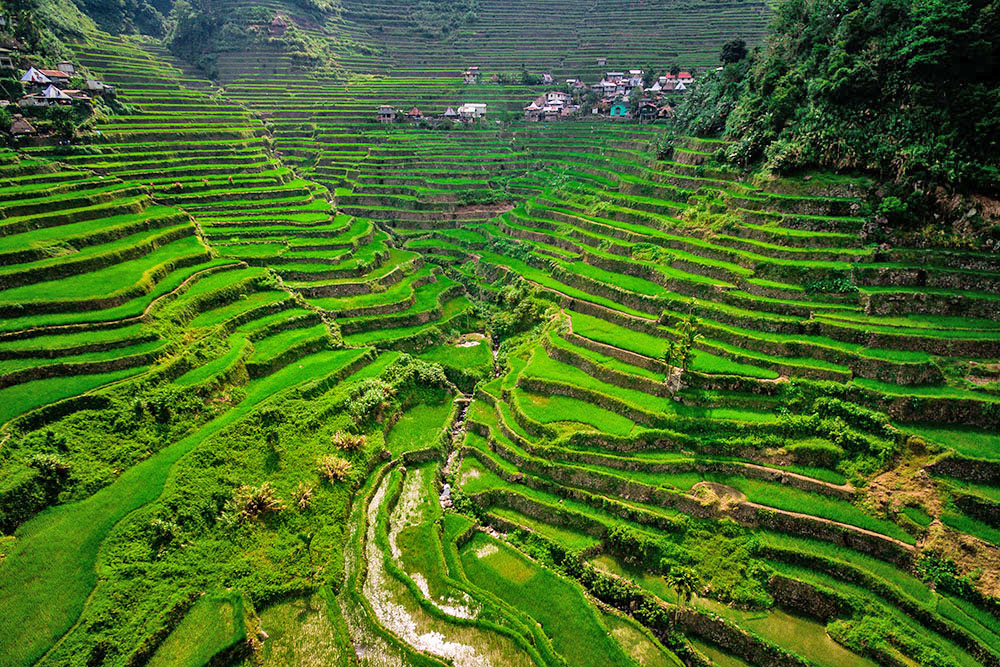 Sprawling over 100,000 hectares across the Sulu Sea, Tubbataha Reefs Natural Park is a diver’s paradise.

Primely positioned in the Coral Triangle (an area comprising 76% of the world’s coral species), this stretch of ocean boasts over 1,200 marine species. This includes whale sharks, green turtles and manta rays that drift along its enchanting lagoons and coral islands. This remarkable biodiversity has it listed as a UNESCO World Heritage Site.

Travelers can only access the natural park from March to June, on live-aboard boats departing from Puerto Princesa.

M/Y Sakura is a more budget-friendly option at $1,270 per trip (minimum five nights). Keep in mind though, you’ll also need to fork out the park entrance fee ($93): this is invested into its conservation, including patrols and education campaigns.

Expect at least a 10-hour voyage from the mainland, before diving into an unforgettable underwater adventure. 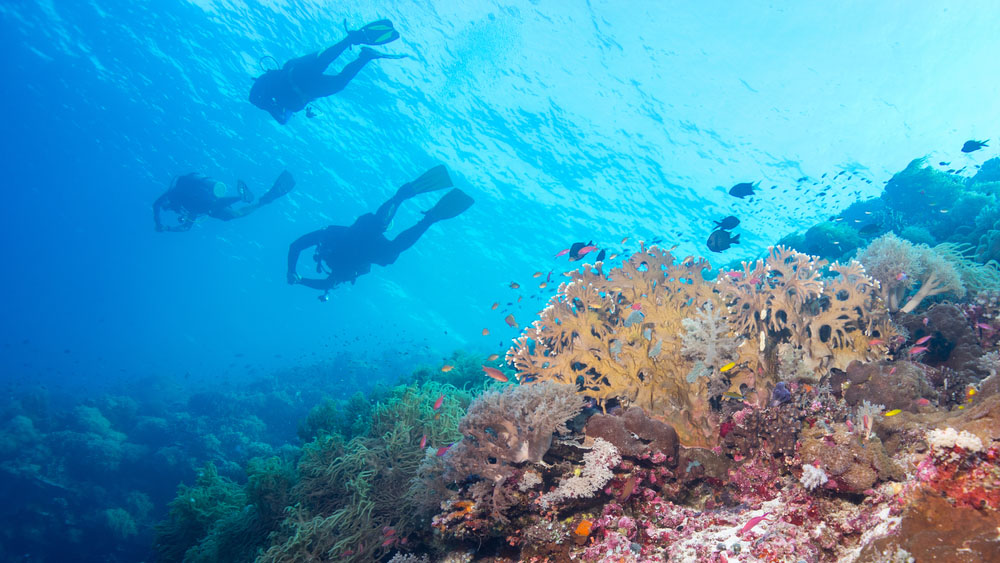 The indigenous Aeta (“eye”-”ta”) people are considered among the first inhabitants of the Philippines, first arriving on these shores over 30,000 years ago.

For millennia they lived on Mount Pinatubo in Central Luzon. In 1991 a volcanic eruption forced them down into the surrounding areas: losing their livelihoods and family members along the way. Today, the Aeta are in a battle to preserve their culture against increasing modernisation.

Deep in the rainforest surrounding Subic Bay (a two-hour drive from Manila), the Aeta continue to live independently and sustainably off their ancestral land.

On this 12-hour tour, local guides will teach you basic survival skills. These include how to make a fire and use a native bow and arrow. Profits go directly to the Aeta communities, helping sustain traditional living and indigenous cultural practices. 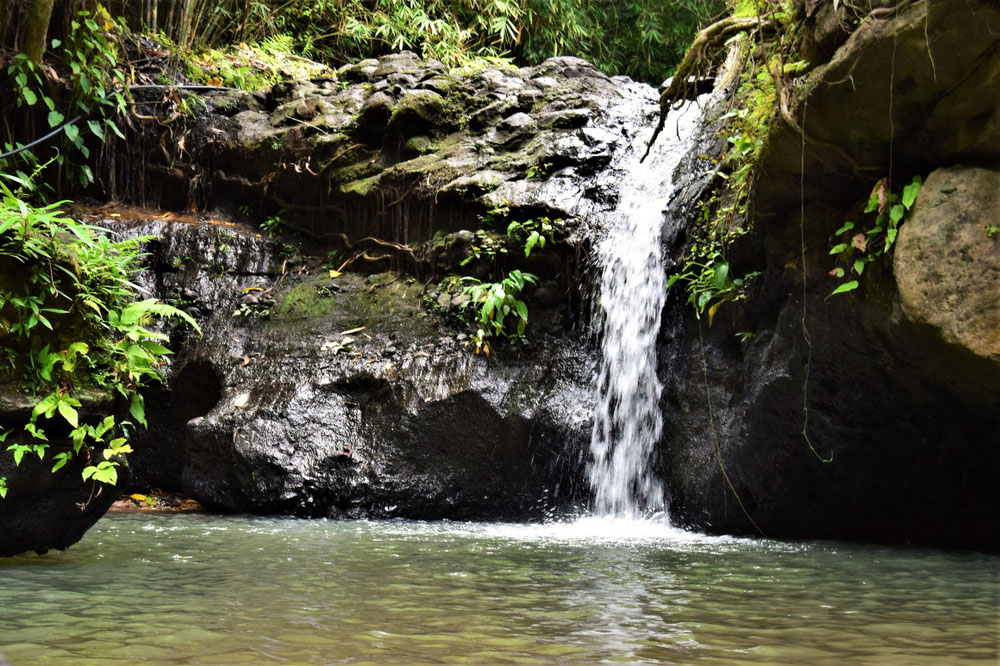 Tao Philippines offers travelers immersive multi-day tours across some of Palawan’s most remote islands. They connect with the environment, culture and people that call them home.

You’ll embark on a traditional paraw boat, with no set itinerary. Instead, each expedition is unique to each group, captained by local fishermen who’ve spent their lives navigating these waters. One trip may see you snorkeling among shipwrecks; another, cooling off in freshwater lagoons.

The initiative’s mission is to spread the economy of tourism to islanders.  A school has even been built for local children. Islanders offer their homes, services and wares to travelers—a great way to invest in the community and experience raw ‘island life’ (bring cash as there are no ATMs). 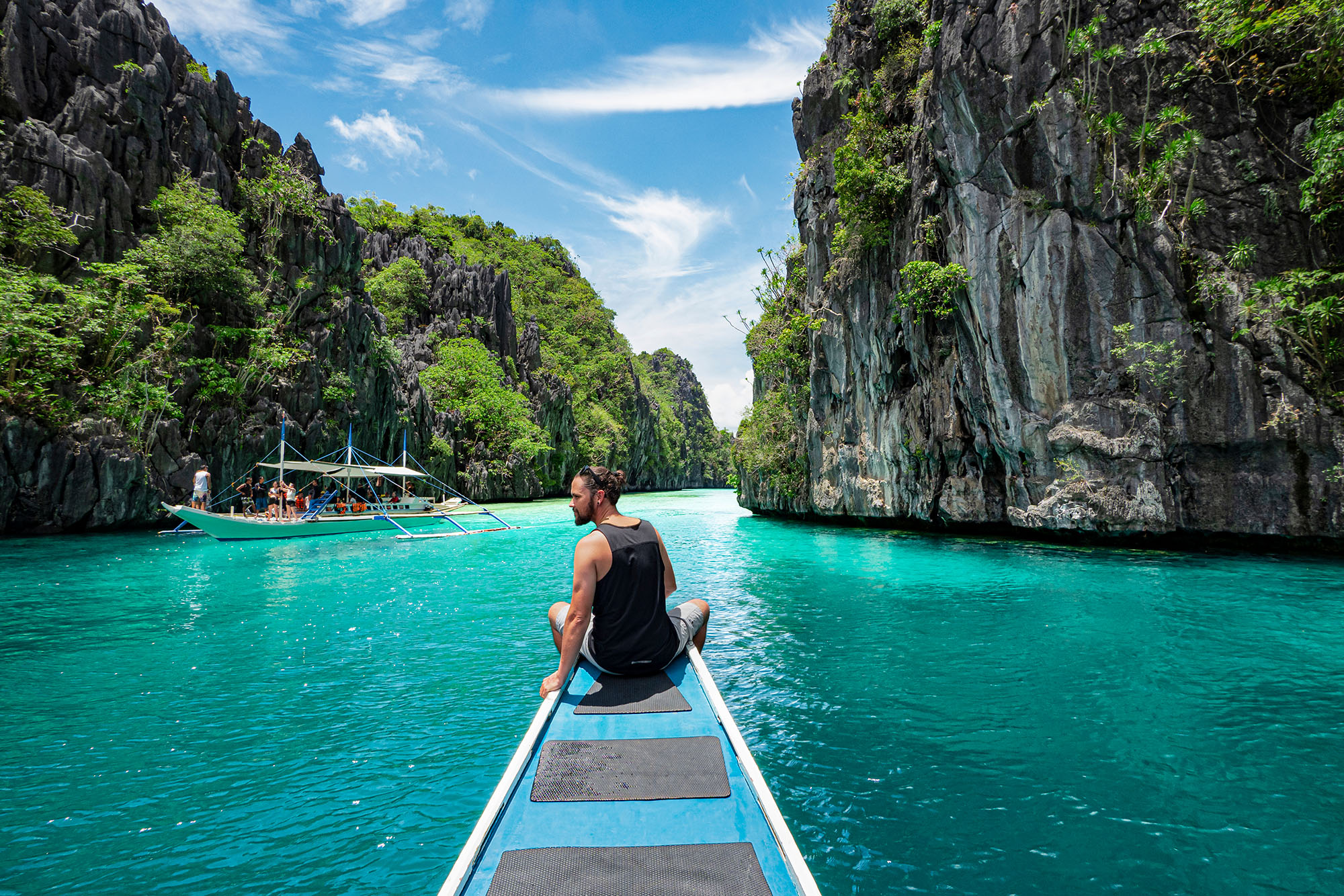 The smog of the Philippine capital doesn't tend to conjure images of an eco-friendly experience. But Bambike’s Ecotour of Intramuros puts pedal-power front and center.

For $35, you’ll traverse across this former Spanish stronghold (for 2.5 hours). You'll ride a handmade bicycle fashioned almost entirely out of bamboo. They’re as strong as steel, yet flexible enough to absorb all the twists and turns you’ll likely make navigating Manila’s streets.

Bambike Revolution Cycles hires workers through a local NGO, equipping them with skills to emerge from poverty.

With a friendly and informative guide, expect to explore narrow streets and hidden corners of the old town. Echoes of the past mingle with modern bustle. 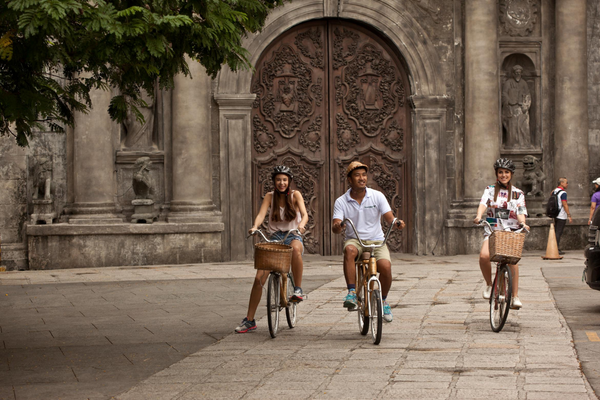 Whale shark tourism in the Philippines has not been without controversy. Operators have been known to act unethically: subjecting these gentle giants to boat collisions and over-petting, while importing their favorite diet of plankton and krill to keep them in one spot (disrupting their migration and breeding cycles).

However, in Donsol (southern Luzon - a half day’s drive from Manila), the WWF has partnered with local authorities to deliver an eco-friendly whale shark watching program.

Tourists must follow strict rules to ensure the wellbeing of these marine creatures. No touching, no feeding, and no flash photography. If you’re lucky enough to spot one, you’re invited to get in the water and admire them from a respectful distance (growing up to 33 feet long, with mouths four feet wide, there’s plenty to see).

Travelers get about 10 minutes with a whale shark before it’s time to send them on their merry way.

Tours are organized through the Donsol Whale Shark Interaction Center (or tourist center), strictly limited to groups of six. It’ll set you back 5,000 pesos ($93) per group (plus a registration fee of $7 per person), no matter the size. If you’re a solo traveler or couple, you best buddy up to save some cash. Whale shark season here runs from November to June. 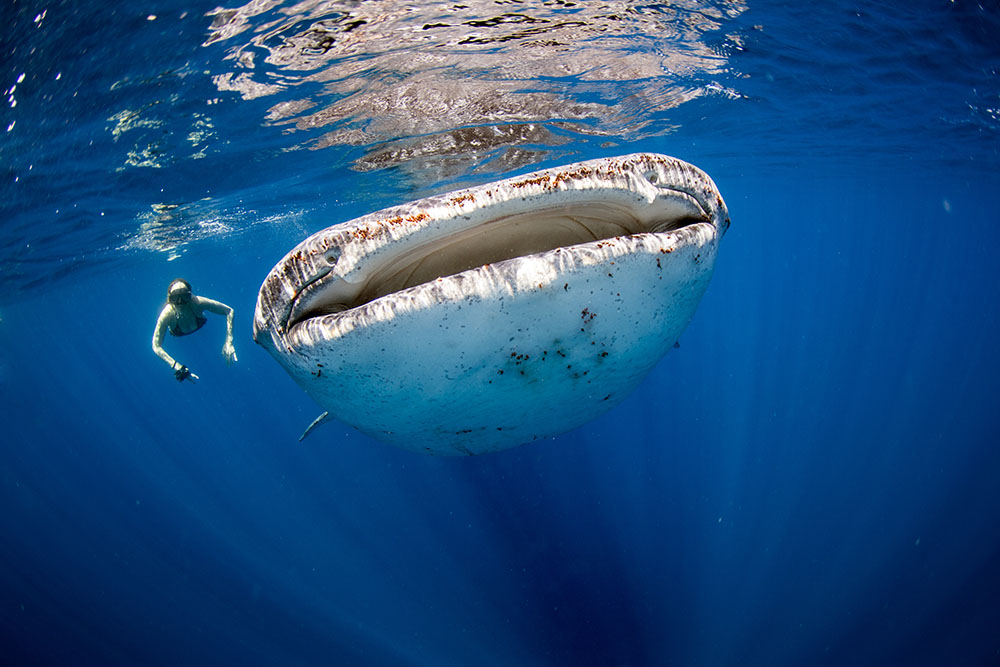 The Philippines is classified by the United Nations ‘mega-diverse’. It's one of only 17 countries on Earth that account for 70% of its biodiversity. Moreover, almost half of animals here can’t be found anywhere else⁠. With each island you visit supporting a totally unique ecosystem.

Mindanao’s Mount Apo Natural Park is at the heart of this. It offers travelers the chance to get up close to rare flora and fauna. This includes endemic species like the pint-sized Philippine deer, and the critically endangered Philippine eagle (the country’s national bird).

The area is considered sacred by indigenous tribes (who volunteer as patrolling ‘forest guards’). Native animals play a vital role in their culture.

More adventurous souls may be tempted to climb Mount Apo: the highest peak in the Philippines. It takes two to four days to conquer. It is highly recommended to hire a local guide: Mt. Apo Adventures is a solid choice, with regularly scheduled hikes and assistance with all the tricky admin you’ll need to enter. 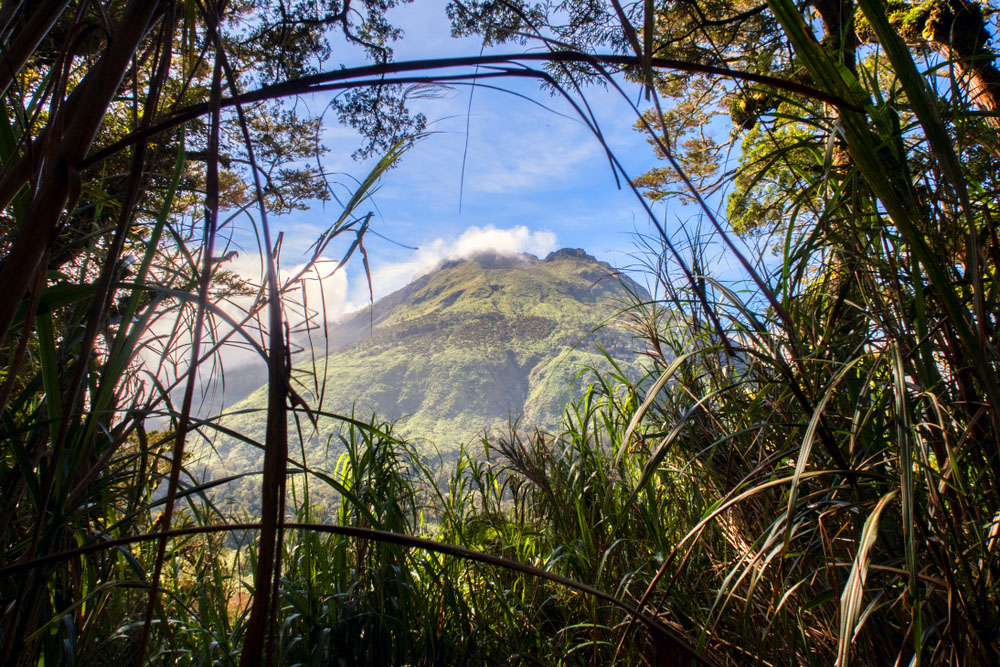 Davao’s Philippine Eagle Center is committed to the survival of this critically endangered species. There are only 400 pairs left in the wild. For 150 pesos (just under $3), visitors get a guided tour of the facility, comprising 8.4 hectares of rainforest.

Run by the non-profit Philippine Eagle Foundation, this conservation breeding facility has so far reared 28 hatchlings (with only one egg laid every two years). This continues to be an ongoing struggle. Deforestation and overhunting have made them one of the rarest animals on Earth.

Philippine eagles are vital to local ecosystems and are common motifs in indigenous cultures (Kalinga warriors once proudly wore eagle tattoos to symbolize their strength).

To ensure these apex predators are fit to thrive outside captivity, they’re trained to hunt and fly. Watch them take off in the ‘flight zone’, where their fearsome power is put on display. 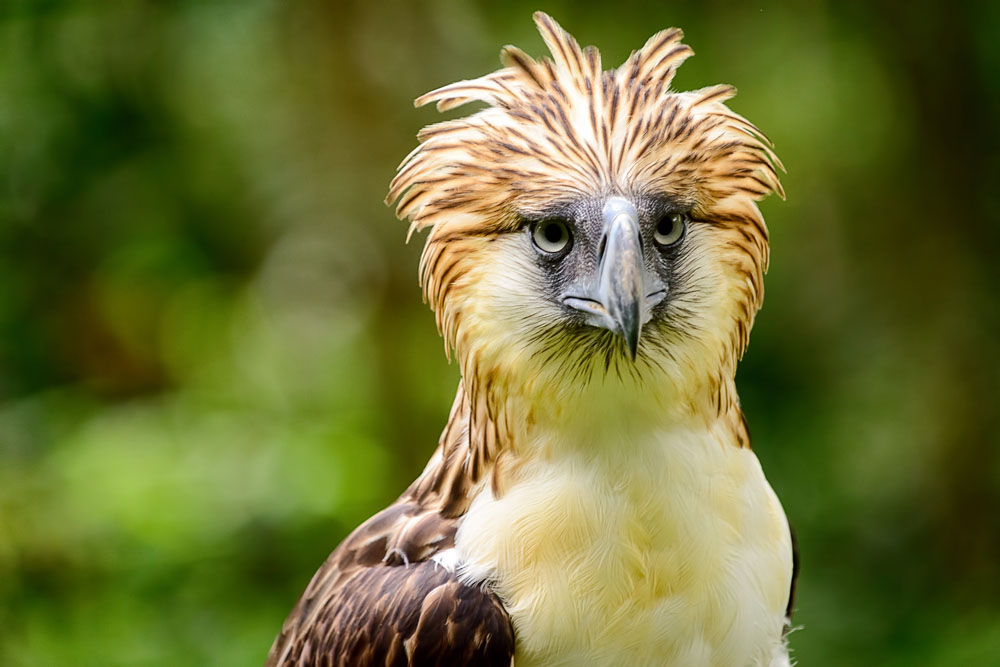 This article is brought to you in partnership with Philippines Tourism.

We had a fabulous time! Everything went to plan. Big thanks for organising!

Our driver adjusted to our schedule and recommended places for when we had time or the best places to try local food.