Peruvian cuisine is one of the most adventurous and extensive in South America, with the country's different geographical regions, varied climates and mix of peoples all combining. Read on for our rundown of the top seven must-try foods on a trip to Peru (prepare to feel hungry!) 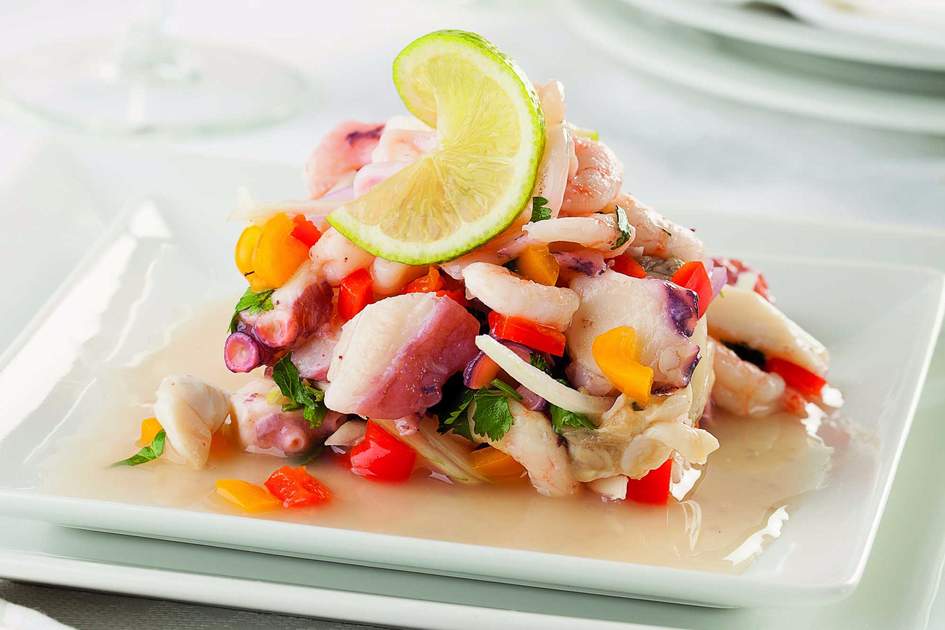 From the fish-based cuisine of the coast and the substantial, spicy dishes of the highlands to the exotic fruits of the jungle, Peruvian food offers plenty of tempting tastes...

Peruvian food has become one of the hottest cuisines in the world, with the novoandina trend (the combination of modern cooking styles and traditional Andean ingredients) introducing Peru's fabulous, fragrant flavours to new audiences. But there's nothing like sampling the country's fare on the ground. Read on for our selection of the top 7 food and drink highlights to have on your trip to this fascinating country. And, when you're finished, get in touch with our local experts in Peru to start planning your foodie adventure.

The best dishes in Lima and other coastal cities are based on the abundant seafood available. The collision of the Humboldt and other currents means the Peruvian sea is full of the plankton that larger fish eat, providing fishermen and cooks with a great variety to choose from. The most typically Peruvian dish is ceviche, a plate of raw white fish in a spicy marinade of lemon juice, onion, and hot peppers.

Each restaurant has its own marinade recipe, and when the fish is freshly caught, ceviche is delicious. It is traditionally served with corn and sweet potato, and there are many variations on the basic formula, often with the addition of shellfish in ceviche mixto. Sample the finest examples of ceviche in Lima on our Peru Express trip, which includes time to experience the city on a morning walking tour of its highlights.

Hot peppers are grown all over the country and are used to add spice to everything from fish to stews. On the north coast, where fish is a big part of the diet, sauces of hot peppers and onions are heaped on top of the main dish or offered as an accompaniment in small side bowls. In the Amazon, where the food tends to be less spicy, people dip jungle vegetables and yucca into fiery pepper sauces. But it is in the highland region where picante (as the hot, spicy taste of peppers is known) reaches an art form. The degree of spiciness depends on the type of ají or chili pepper used. These can vary from the moderately sharp taste that novices can tolerate to the screamingly hot rocoto peppers whose fire-engine red is not only decorative but a warning signal.

Tourists beware: as in Mexico, locals love to confuse newcomers with the strength of the picante, which can destroy your tastebuds for the rest of the day.

Take your chances when you have lunch on our Uros and Taquile Islands Tour on Lake Titicaca, the world's highest navigable lake.

Potatoes originated in Peru and Bolivia and were introduced to Europe by the Spanish. Fittingly, there are around 4,000 mostly unique Peruvian varieties of potato, including the yellow limeña, the small purple potato, and the dried chuño, which is frozen in the harsh climate around Puno and Lake Titicaca. “Only” a few dozen varieties, however, are regularly consumed.

Potatoes are an essential part of most of the filling one-pot dishes common in highland cuisine. Peru’s highland soil also produces other tubers that form part of the national cuisine. There is the olluco vegetable, which can range in colour from red to orange, and has a taste like new potatoes. It is often shredded and served with dried llama meat or charqui (beef jerky) in a stew. In a few places you may find oca or arracacha served instead of the usual potato. The sweet potato or camote is also plentiful and full of taste. 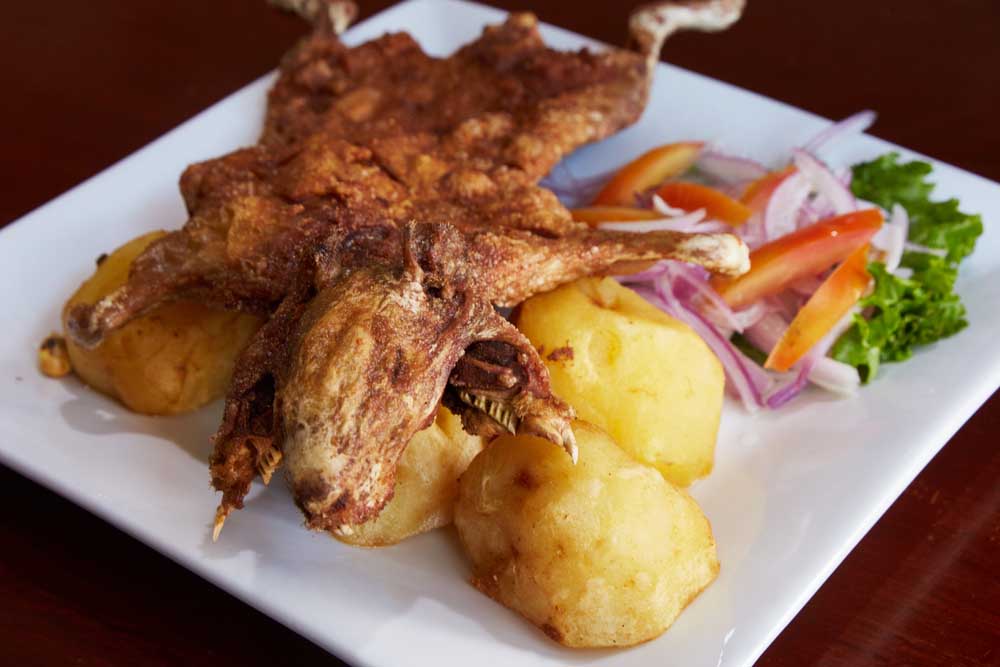 Around Cusco, a choice delicacy is the cuy or guinea pig. This is often presented deep-fried like Southern chicken, and the taste is somewhere between chicken and rabbit. The dish is served throughout Peru and it is very popular, although visitors are often taken aback when offered it. Not to everyone's taste, perhaps, but roasted or deep-fried, cuy is undoubtedly a Peruvian speciality. If you fancy trying it, ask your Peru local expert to arrange the best place for you to eat while in Cusco on our The Andes to the Amazon tour.

Before the arrival of the Spaniards, the different highland civilisations in Peru cultivated many other grains. Some of them, including the purple-flowered kiwicha and the golden quinoa – both kinds of amaranth – were banned by the Vatican on religious grounds, and disappeared from the Peruvian diet for several centuries. Quinoa has recently been majorly rediscovered as a healthier variant to the potato, and is being used once more in all manner of dishes.

The experimental and evolving trend of novoandina cooking has put Peru at the vanguard of Latin American cuisine, and this has partly comprised the embracing of highland ingredients once disdained as “Indian food”. Upscale restaurants now serve the high-altitude quinoa grain, along with delicious highland potatoes, aguaymanto, an acid wild Andean, and alpaca meat, esteemed for its low fat and cholesterol content.

Peruvians love to finish a meal with a sweet dessert. Often this will be something that is part of the culinary tradition brought over from Spain. Favourites include manjar blanco, a kind of fudge made from boiled milk and sugar; cocadas (coconut macaroons); or the typically Spanish churros, pastry dough similar to doughnuts fried and eaten with honey or chocolate. Manjar blanco and meringue, along with a dash of Port and a sprinkling of cinnamon, go into Peru’s most famous dessert, suspiro limeño (“Lima sigh”). 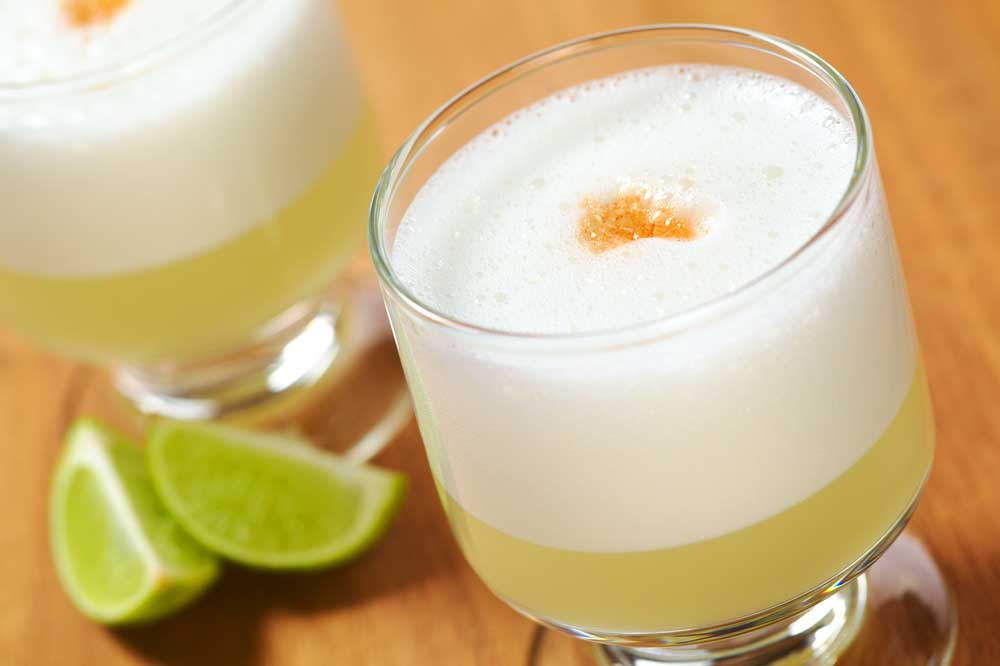 As with other Latin American countries, it was the Spanish missionaries who first established vineyards in Peru. But until recently the Peruvian wine industry has not been as developed as those of neighbouring Chile and Argentina, and only a few of the vineyards around Ica – the Tacama, Tabernero, and Ocucaje labels for example – are of any note. Most of the grapes are used instead for making pisco, which in turn is the basic ingredient for the Peruvian national drink, pisco sour. This cocktail is a mixture of pisco, egg whites, lemon juice, and sugar, plus a few drops of bitters. The result seems innocuous, but can be explosive. So important is pisco to national identity, that in 1988 the Peruvian government declared it to be part of the cultural heritage of the nation. Learn how to make this delicious cocktail for yourself, while sampling the best of Lima's foodie offerings on our Culinary Tour by Night experience.

Hungry for a trip to Peru with Insight Guides?

Speak to a local expert today by submitting a trip request; they'll plan, organise and book your trip from start to finish