Soaring skyscrapers, dazzling neon lights and high-speed bullet trains packed with commuters may spring to mind when you think of Japan. However Hokkaido, the country’s northernmost major island, is better known for snow-capped volcanoes, hot springs and winter sports. 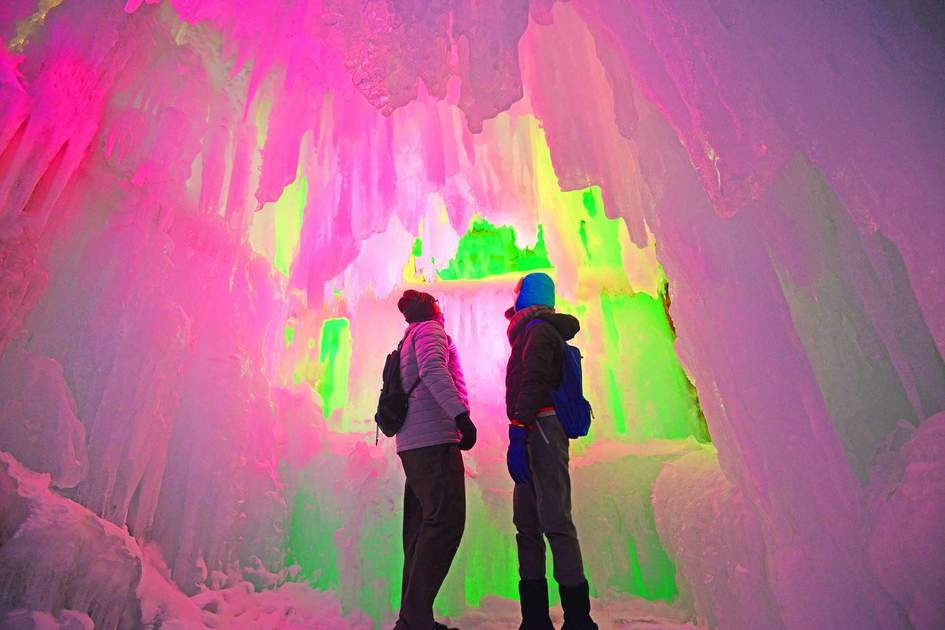 The coldest of Japan’s islands, mountainous Hokkaido becomes a land of ice and snow during the winter. However, the region embraces its freezing conditions making it a vibrant destination during the colder months. Here is our guide to the highlights of winter in Hokkaido.

Hokkaido stages a celebration of the region’s winter weather each February with a host of activities and attractions during the Sapporo Snow Festival. The origins of the event date back to 1950 when a handful of students built a few snow statues in the city’s Odori Park. Fast forward to the present, and the festival has grown into a major event that attracts around two million Japanese and international visitors each year.

Most people come to see the enormous ice and snow sculptures for which the festival has become best known. Up to 400 are displayed in Odori Park, in the grounds of the Sapporo Community Dome sports complex (known as the Tsudome) and along the illuminated main street in Susukino. Think the Taj Mahal, a giant Pikachu and Dragon Ball Z anime characters carved in sparkling snow and ice, soaring as high as 15 metres and stretching up to 25 metres wide.

The Tsudome is the place for icy fun to be had zipping down expansive snow slides on rubber tubes or sledges, and enjoying rides on rubber rafts that are towed across the snowfield by snowmobiles.

Off the northeastern of Hokkaido, the Sea of Okhotsk provides one of the region’s most spectacular natural attractions during winter. From mid-January to early April, off the coast from Monbetsu down to the Shiretoko Peninsula, drift ice can be seen floating on the surface of the sea, sometimes forming a layer that is almost solid. To get close-up views of this remarkable phenomenon, you can take sightseeing tours on the Aurora icebreaker ship, which leave from the city of Abashiri. The ship’s combination of power and weight allow it to break through the ice, and passengers out on deck can hear and feel the impact as the ice breaks. Keep in mind that the average temperature in February is around minus 10 degrees Celsius, so it’s important to wrap up warmly.

A visit to the city’s Okhotsk Ryuhyo Museum reveals further details about the nature of drift ice. The highlight is the freezing cold Experience Room featuring enormous slabs of real drift ice weighing many tons, which visitors can touch and use to freeze wet towels solid. From the museum’s rooftop observation deck, you can take in panoramic views of the Sea of Okhotsk and the Shiretoko Peninsula. 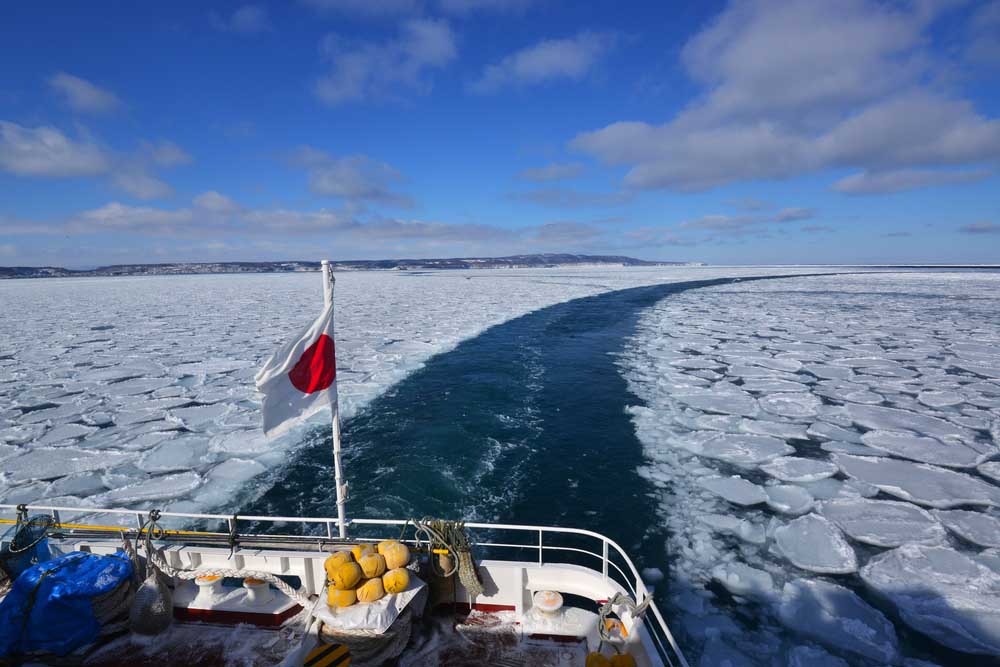 View behind the icebreaker ship on a drift ice tour in Hokkaido, Japan. Photo: Shutterstock

The north of Japan provides travellers with the opportunity to sample a variety of culinary delights. Hokkaido is known for the top quality seafood caught in its cold waters and vegetables grown on its abundant farmland. Winter specialities include game animals such as sika deer, which are hunted from October to January. The deer meat is lean, rich in protein and known for its full-bodied, flavour-packed taste.

Tsukemono, pickled dishes, are also well-known in the region, and izushi, fish, such as herring, sandfish or salmon lacto-fermented in water and salt, are some of the most popular of these types of dishes during winter. As a vegetarian side dish, you can tuck into Sapporo taikyu, huge green cabbages which are also used for pickling. A much-loved ingredient used in the typical preserved foods from the region, they are prized for their wonderfully thick and crunchy texture, and not to be missed.

Hokkaido is undoubtedly the place to be for the best winter sports in Japan. Snow usually starts falling in the region for around six months from November onwards. The town of Niseko is a particularly popular destination, known for its plentiful, top quality powder snow. The largest of its five ski resorts, Grand Hirafu offers around 30 ski runs in total. These trails are suitable for skiers and snowboarders of all abilities, and a number of pistes are specifically geared towards beginners and families.

After a day on the slopes, you can make the most of one of the most enjoyable aspects of the winter sports experience in Japan – onsen, or thermal spas. Unlike like European style après-ski, instead you can treat yourself to a relaxing natural hot spring bath and soak away the aches in your muscles, while taking in the natural beauty of the surrounding snowy landscapes. 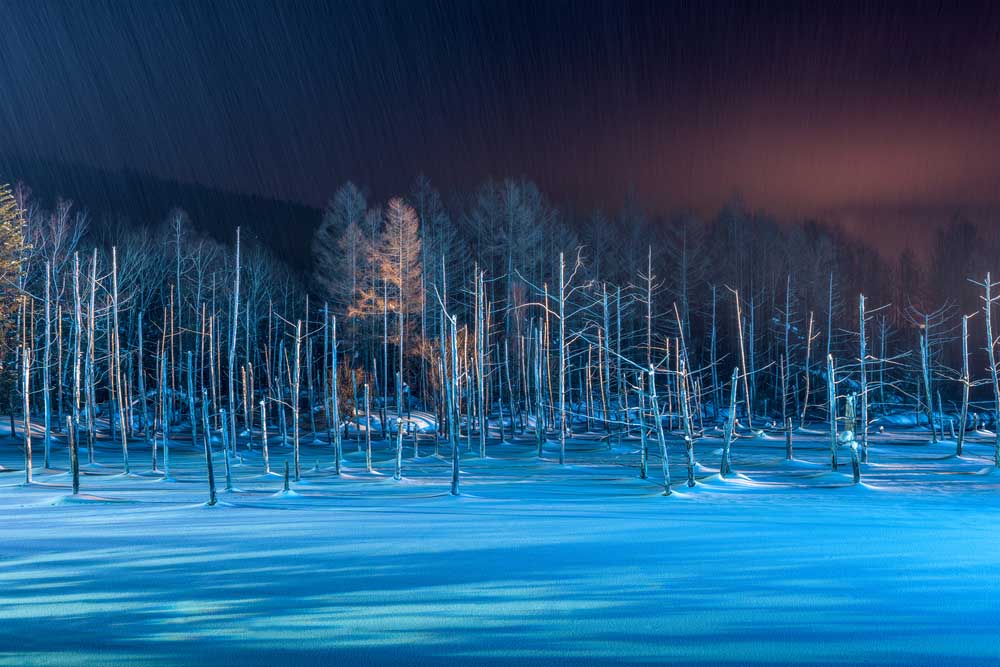 To view a strikingly idyllic scene, head to the Shirogane Blue Pond a short drive away from the town of Biei. Named after the deeply intense blue colour of its water, the man-made pond was actually formed accidentally when a dam was built on the Biei River to prevent destructive mudflows affecting the town, in the aftermath of the 1988 volcanic eruption of nearby Mount Tokachi. The pond’s startling blue colour is a result of aluminium deposits from the rock face of the nearby Shirahige waterfall down which its waters flow.

Vibrant shades of turquoise, shimmering emeralds and deep blues are accentuated by the reflections of birch and larch trees protruding from its surface. In winter, the pond is atmospherically illuminated at night (until 9pm). And when it is cold enough to freeze over, the snowfall lying on the pond’s frozen surface adds to the dream-like quality of the scene.

Ready to book a trip to Japan?

Our local experts can help you plan, organise and book wonderful tailor-made trips to Japan. Simply get in touch letting us know your ideas for the trip and when you would like to travel. We will then prepare an itinerary especially, which you can amend until you’re completely happy with every detail before booking.