15 places to see the best architecture in the world 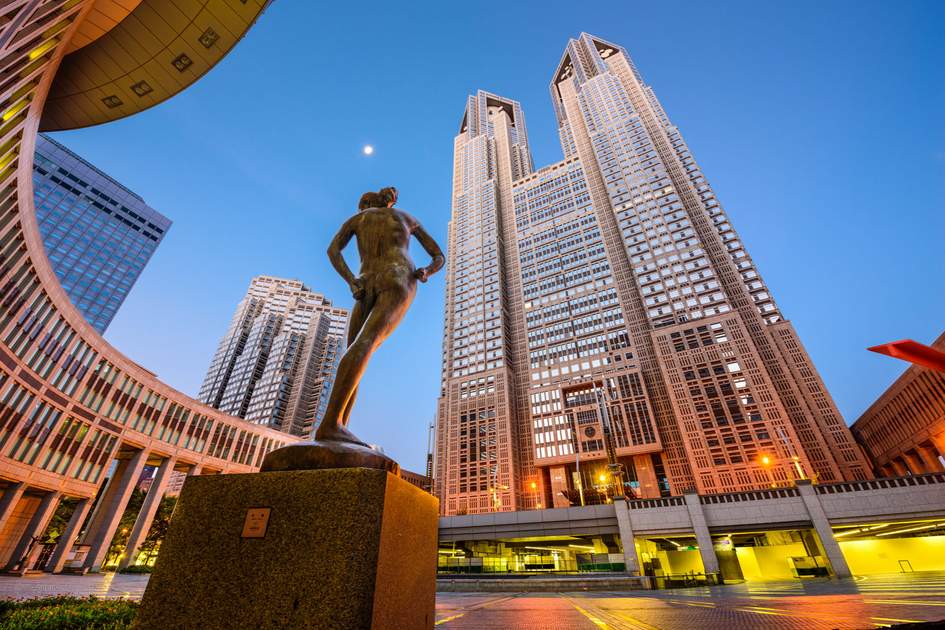 Calling all architecture buffs: We've scoured the globe and compiled a list of the destinations known the world over for their incredible designs. From bustling cities to quaint villages, these 15 places reflect the best architecture planet earth has to offer.

Ready to marvel? Read on.

We can't talk about the world's most epic buildings without mentioning Dubai's skyline, which is home to the tallest building on the planet. The staggering Burj Khalifa kisses the sky at a whopping 2,717 feet, making it a buzzworthy piece of modern architecture indeed. Dubai is certainly defined by its overall modern design aesthetic. The Burj al Arab and the Jemeriah Beach Hotel are two other astounding fixtures that make Dubai a leader in forward-thinking construction.

Let us take you to Dubai... 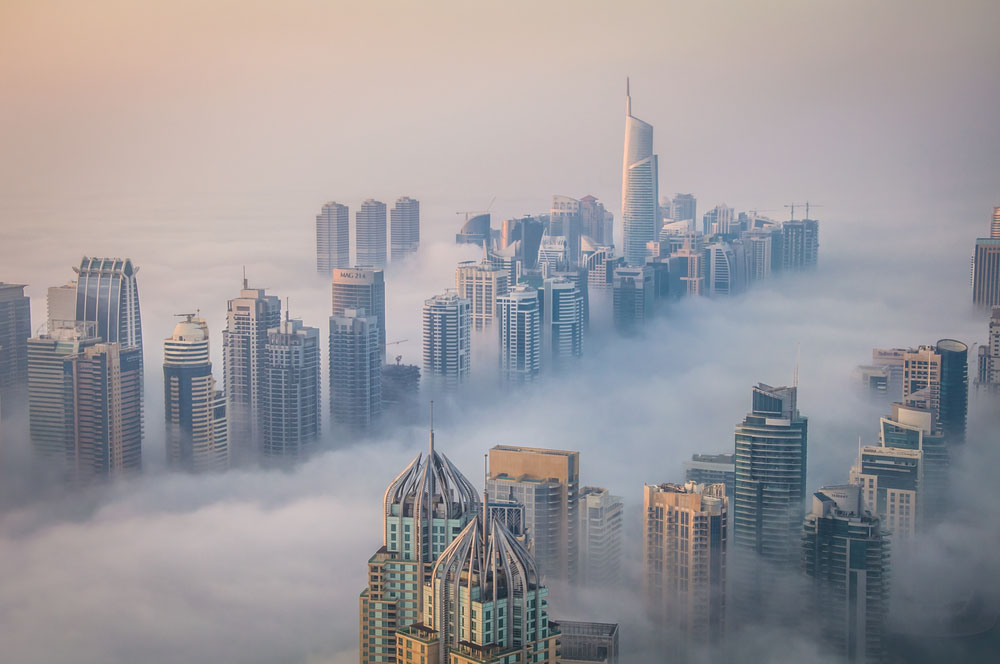 When it comes to the structural design of Hong Kong, the words crowded, colorful and vertical come to mind. This buzzing metropolis is known for its dense, jam-packed environment. In fact, there's over 6,600 people per square kilometer, making it the fourth most densely populated territory in the world. To accommodate all these folks, Hong Kong builds up, creating a towering skyline that's nothing short of jaw-dropping. It's little wonder that Hong Kong also touts some of the most spectacular views in Asia.

Let us take you to Hong Kong...

The Sydney Opera House is easily one of the most iconic buildings in the world. Its marvelous, billowing sails appear to bloom on Sydney Harbour; a fitting look for this landmark and cultural epicenter. The building itself has a storied past. The architect actually walked out on the project halfway through its 14-year building process—while construction costs skyrocketed. Thankfully, the finished product came together, giving Sydney its pride and joy.

To catch glimpses of shimmering, golden pagodas that awe and inspire, put Bagan, Myanmar on your list. The city is known for its serene, ancient temples that are simply divine (especially come sunrise and sunset, when the views of the lush plains below are at their best). Home to some 2,200 religious structures, like pagodas, monasteries and temples, Bagan boasts an almost hypnotic feel. Shwesandaw Pagoda in particular is a real stunner that epitomizes the area's design philosophy.

Let us take you to Myanmar... 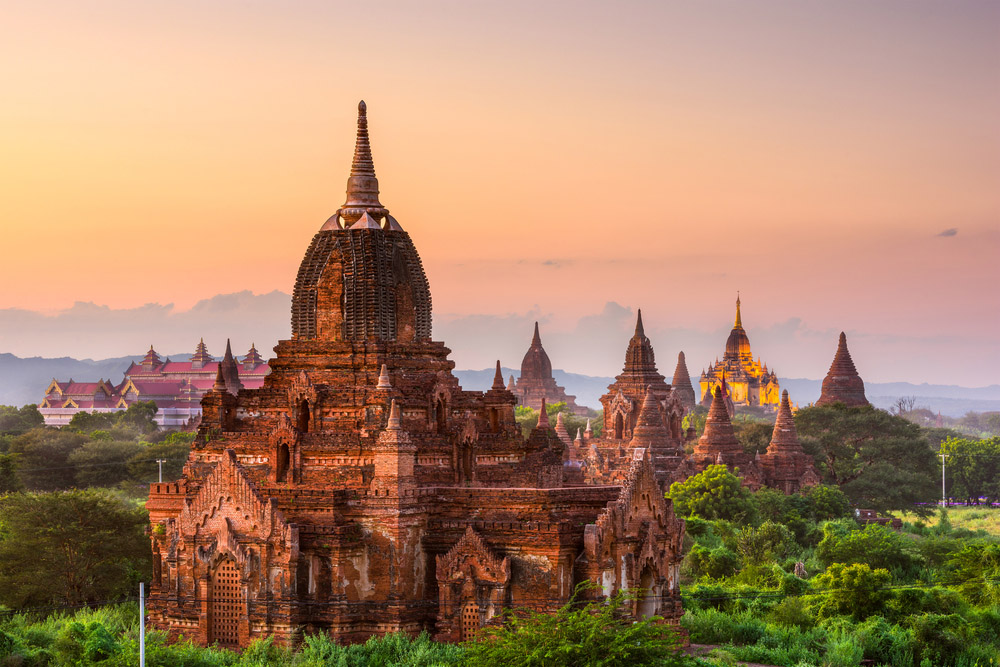 The Yucatán Peninsula, located in southeastern Mexico, is a unmissable destination for ancient architecture. History buffs are sure to get their fill in the northern Yucatán, where Uxmal awaits. This is where visitors will find one of the most remarkable ancient Maya cities (and UNESCO World Heritage Sites). The many structures of Uxmal are revered as precious archaeological sites. The Pyramid of the Magician is a fine example of a quintessential Maya ruin. To stroll through this part of the Yucatán Peninsula is to step back in time.

Let us take you to Mexico...

The Argentine capital is wonderfully over-the-top and edgy; and its architecture is no different. The buildings are a mishmash of varying styles and endless influences, creating a truly diverse mix of structures. Buenos Aires reflects the modernism of Europe and North America, along with the grassroots cultural movements of the 20th century. Today, you'll find everything from glimmering skyscrapers in Puerto Madero to charming colonial buildings in San Telmo.

Let us take you to Argentina... 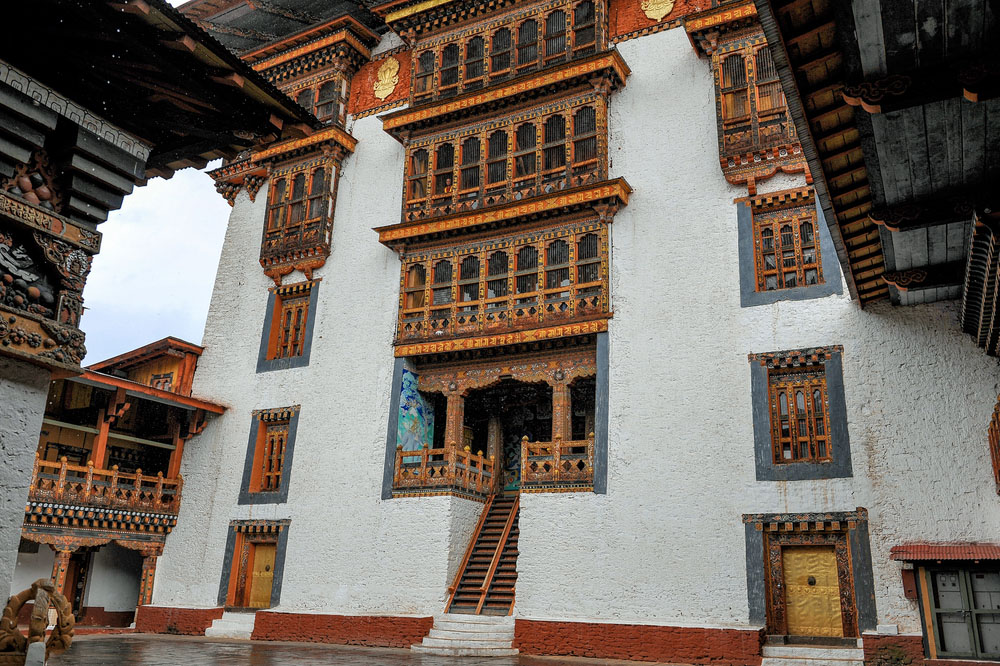 Thimphu, the capital of Bhutan, is a spiritual yet buzzing city tucked away in the wild Himalayas. Instead of traffic lights, local policemen monitor traffic flow using old-school hand signals. Similarly, some of its architectural gems are reminiscent of simpler times, while others burst with modernity. A landmark in Thimphu is certainly the imposing Buddha Dordenma. Meanwhile, there's no shortage of luxury hotels. For a true taste of Bhutan's famous architecture, venture into the many holy temples and sacred monasteries.

Let us take you to Bhutan...

Kuala Lumpur's architecture represents a refreshing blend of colonial influences and contemporary inspirations. The Petronas Towers, among the world's tallest buildings, are the city's architectural triumph; a stunning display of steel and glass that provide mesmerizing panoramic views of Kuala Lumpur. On the other end of the spectrum, those colonial influences can easily be seen in the compact historical center of Melaka, complete with picturesque temples and mosques.

Let us take you to Malaysia... 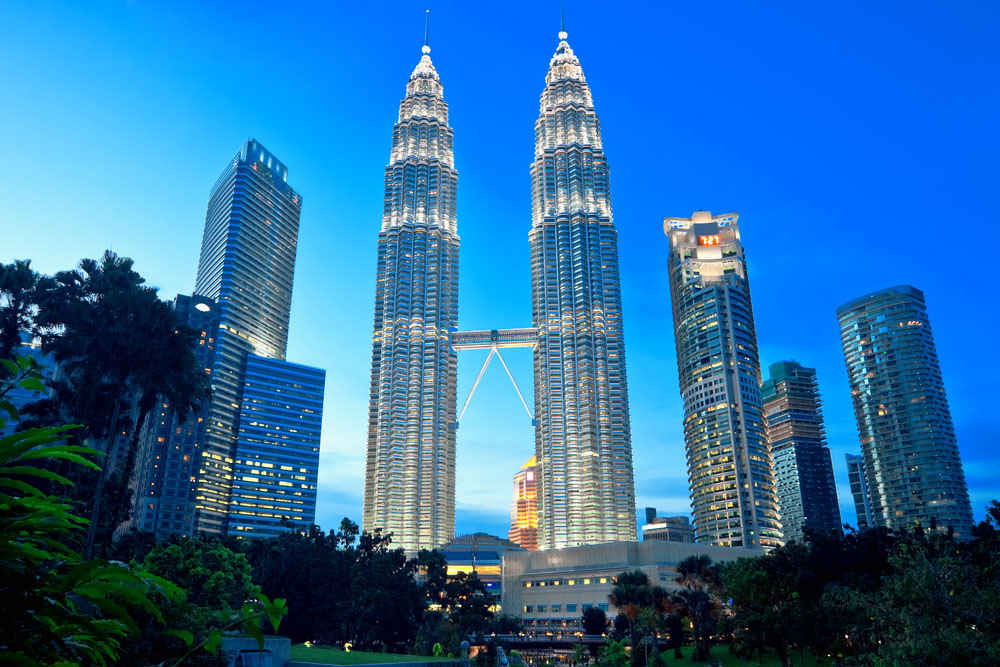 To wonder through Beijing's Forbidden City is to experience classical Chinese architecture at its best. This former imperial palace, with its ornate, golden roofs and traditional design, is a sight to behold. Outside the Forbidden City, Beijing has plenty of contemporary architectural treasures to discover. Chief among them are the Bird's Nest National Stadium, the National Grand Theatre of China, and the Beijing National Library—all of which are strikingly modern and current.

Let us take you to China...

Copenhagen is known for both its stunning 18th-century neoclassical architecture and its more forward-thinking design concepts. In this city, you'll find enchanting waterways set against vibrant strips of charming old buildings. Other areas showcase structures influenced by both Baroque and Renaissance styles. But it's really the city's modern masterpieces that steal the show. The National Aquarium and the Royal Danish Opera House are prime examples of the evolution of sleek, edgy aesthetics in Copenhagen.

The culture in Tokyo is part glam, part traditional; and the same can be said for its architecture. Its dominant futuristic design aesthetic is especially prominent in the city's Metropolitan Government Office, which was designed by award-winning architect Kenzo Tange. This local government building is anything but ordinary, boasting a glossy walkway that connects twin towers that extend 48 storeys high. The rest of glitzy Tokyo is an exuberant mix of neon and concrete.

Let us take you to Japan... 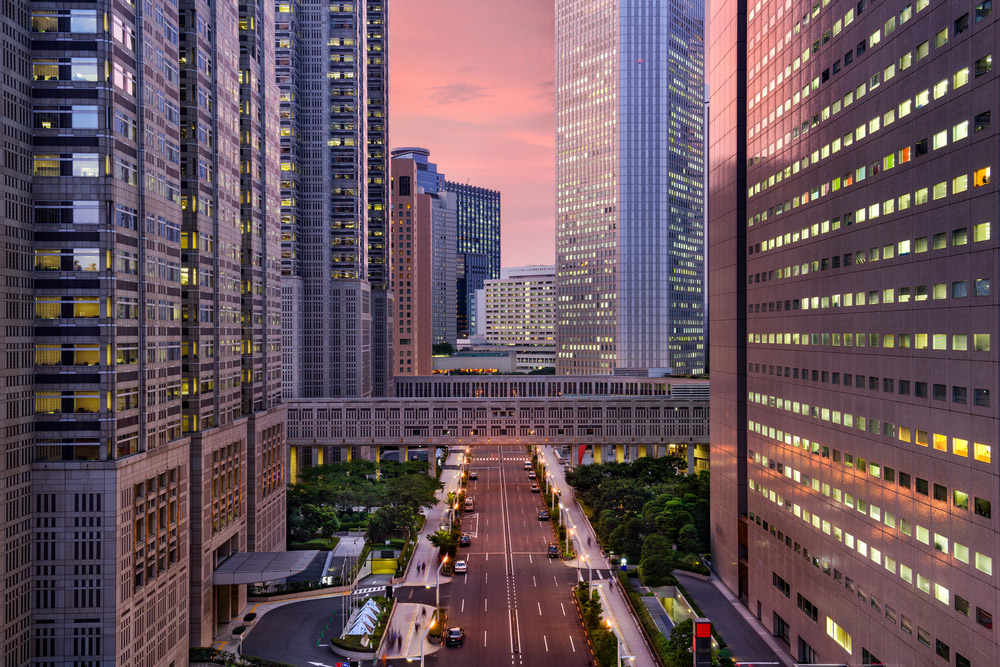 Spanish colonial architecture is alive and well in Quito. But this part of Ecuador represents a tale of two cities, as shiny, contemporary designs continue to sprout up all over. But perhaps this only makes Quito all the more appealing for design junkies. Here, you'll find romantic, narrow side streets reminiscent of Spain. Elsewhere, you'll stumble upon grand, glossy buildings beaming with cosmopolitan pride. In other words, Quito offers up the best of both worlds.

Let us take you to Ecuador...

The ancient wonders of the Inca empire come to life in Cusco, Peru. Here, authentic Inca architecture has survived countless years and at least two major earthquakes. Intricately fitted curved stone walls are a throwback to the masons of Inca times. The fact that these structures are still standing is astounding. Meanwhile, the Church of the Society of Jesus (Iglesia de La Compania de Jesus), built in the 1500s, is a stunning display of Spanish colonial architecture that stands out as a design jewel in Cusco.

Berlin's architecture is a mixed bag, a varied collection that reflects the city's cultural evolution through the 20th century into today. The Fernsehturm (Television Tower) stands proudly on Alexanderplatz ,which is one of Berlin's most celebrated squares. Its colossal metallic sphere is all at once futuristic and imposing. Meanwhile, the Reichstag's stunning cupola is an architectural treasure indeed. Berlin is also home to a good number of historical monuments, including the epic Philarmonie.

To explore the architecture in Prague is to go on a grand journey. (The word magnificent feels like an understatement.) The capital city is a wonderland of different styles, covering the spectrum from Gothic to Romanesque to Baroque; and everything in between. The final result is a cityscape that's as varied and diverse as they come. 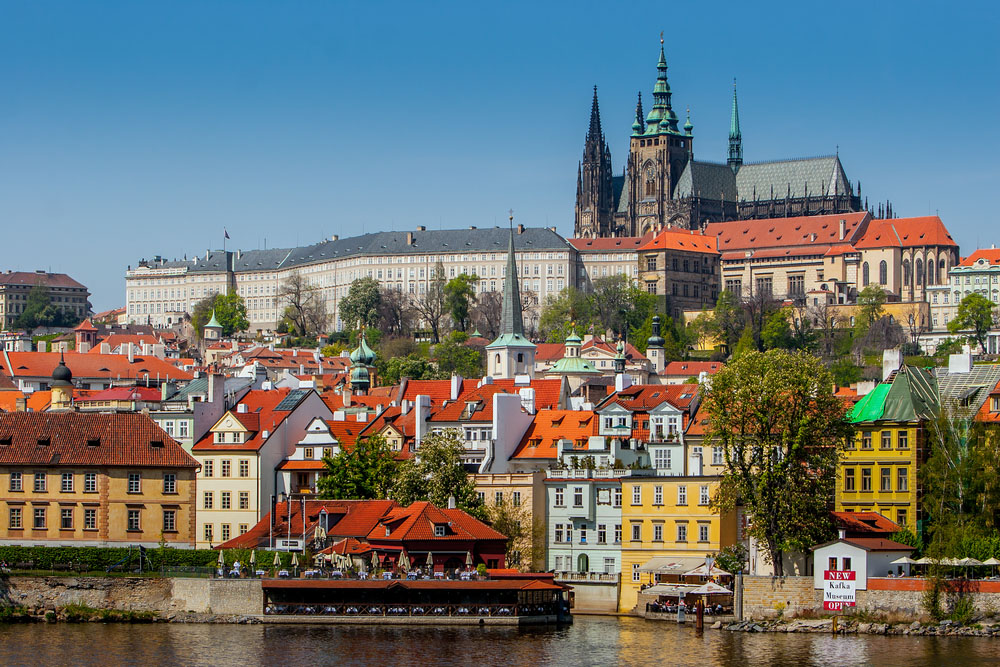 View of the Cathedral of St. Vitus, the Vltava River, Prague. Photo: Shutterstock

See a bit more: A closer look at Thailand's architecture

Pick your next destination: 20 best places to visit in 2016

Start planning your next travel adventure: Where to go in June, July and August

Get a jump on your autumn travel itinerary: Where to go in September, October and November