5 things to do in Bayeux

Mention the name "Bayeux" and you instantly think "Tapestry", but there is much more to discover in this ancient Norman city in addition to its show-stopping treasure. Read on to find out all about the things to do in Bayeux on your trip to Northern France. 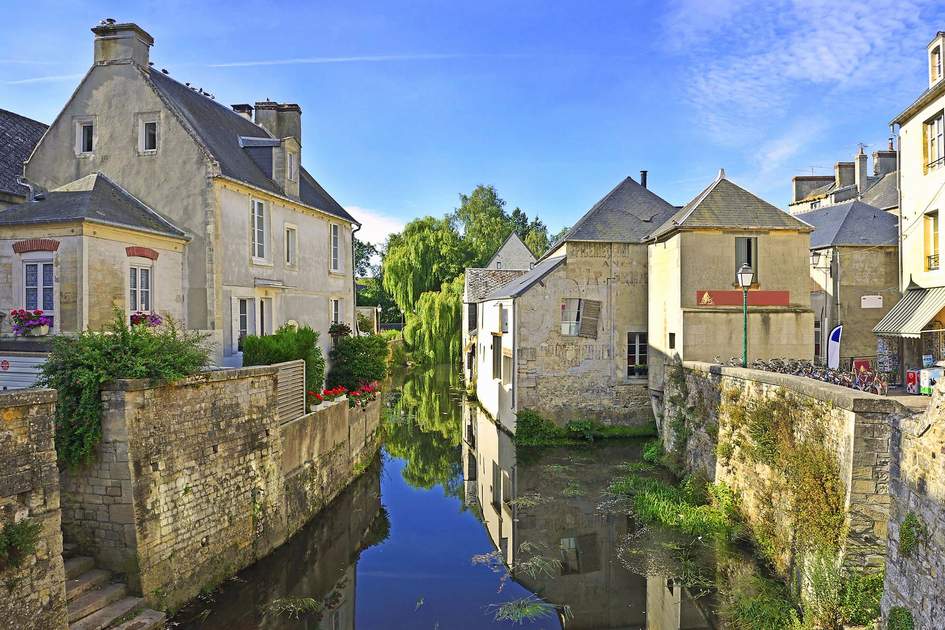 Normandy, in Northern France, is rich with attractions of historic significance, and the city of Bayeux is home to some of the most show-stopping sights

1. Marvel at the Bayeux Tapestry

Bayeux’s unique treasure, of course, is the Bayeux Tapestry, superbly ­presented in the Centre Guillaume-le-Conquérant, with a museum to set the historical context. Visitors walk along the carefully-displayed cloth, listening to personal audio commentary in their own language. The Bayeux Tapestry is one of the earliest and most vivid examples of visual propaganda. Almost certainly made in England in the 1070s and commissioned by Odo of Bayeux to hang in his new cathedral, it presents the Norman case for William’s right to be King of England. Earl Harold, the Saxon claimant, is shown being sent to Normandy by King Edward the Confessor to tell William he is his chosen successor. Harold then fights alongside William in Brittany, and swears on holy relics to support William as king, so that by then claiming the throne himself he broke a sacred oath and committed a crime against God. The scenes then gather pace, with superb visual verve, to climax in William’s victory at Hastings. How much is entirely true is impossible to know, since no contrary Saxon version exists.

Beyond the main events, the great fascination of the Tapestry (really an embroidery) lies in all the details it gives of 11th-century life: the way ships are built, the gathering of stores for the invasion, the moustaches of the English, the peasants stripping clothes off the dead after the battle. The margins at top and bottom of the main panel are filled with all kinds of images, of peasant life, strange animals, legends, before the dead and the dying from the main panel spill over into them in the dramatic final scenes.

This is a must-see for any visitor to Bayeux – especially history buffs – and will be a highlight of your trip to Normandy. View the tapestry as part of Insight Guides' Northern France Tour: City to Coast. 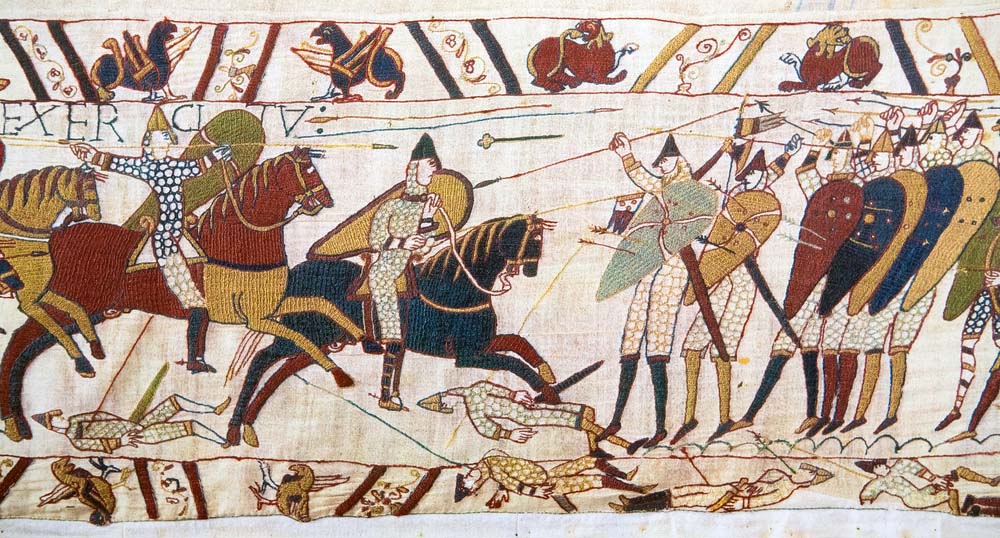 Detail of the Bayeux Tapestry, which depicts the Norman invasion of England in the 11th Century. Photo: Shutterstock

Bayeux is filled with charming restaurants, bistros and wine caves, generally serving a sampling of Normandy's delightful specialities (mainly involving cheese, cider, apples, terrine and seafood) or you can grab a galette (local buckwheat crepe) on the go. For a fine traditional meal, Le Pommier is a great choice – the dishes make use of local ingredients and the setting is stylish, plus they offer a good menu du jour.

3. Feel your spirit soar in the Cathedral

The glorious Bayeux Cathedral, consecrated by Odo, Bishop of Bayeux and William’s troublesome half-brother, in 1077, has one of the most beautifully serene of Norman naves. The Cathedral is a blend of Norman-Romanesque and Gothic architecture, but the unified whole is quite magnificent. The highlight is the crypt, which dates from the 9th century but was only rediscovered in the 15th century. The weight of history and chill air makes this quite an evocative place. As entry is free, it's easy to include a visit here, spending as much or little time as you like as you explore the city. 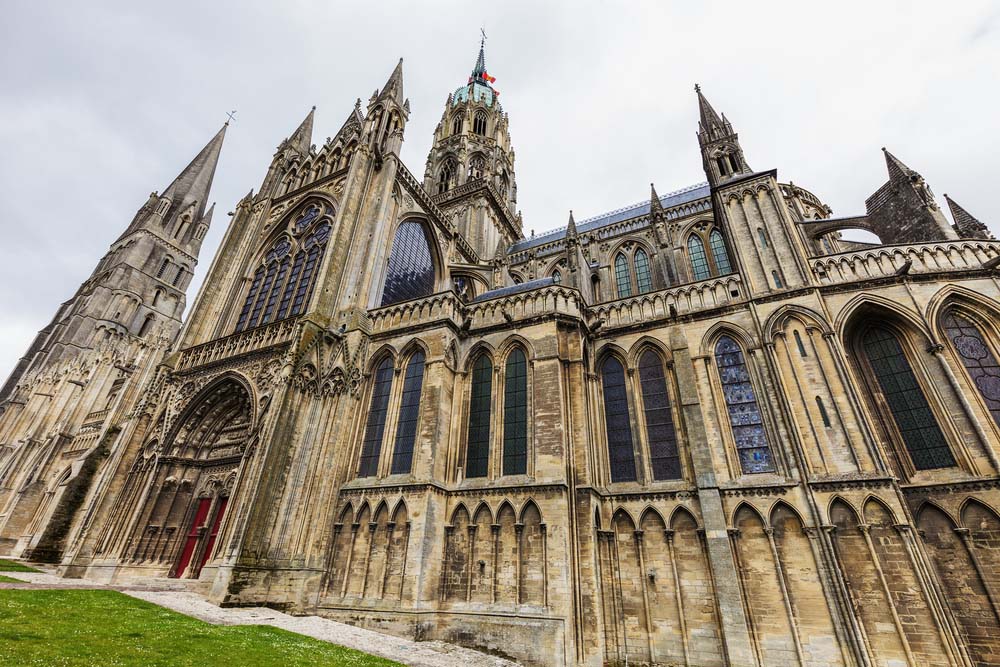 Bayeux had the great fortune to be liberated by British troops on 7 June, 1945 and so emerged near-unscathed as a model Norman country town, with medieval and 18th-century houses on its long main street. But the D-Day landings took place on the beaches just north of the city and as such, this is the ideal place to start a tour of historic places of interest. An excursion along the Normandy coast is the perfect way to access these evocative sites, and contemplate the scale of the operations that led to the liberation of France in 1944, especially poignant after a visit to the Bayeux Tapestry, with its depiction of the Norman conquest of England.

On the south side of Bayeux is the largest Commonwealth War Cemetery in Normandy, and the Musée-Mémorial de la Bataille de Normandie, which those interested in the events of the campaign will find very informative. 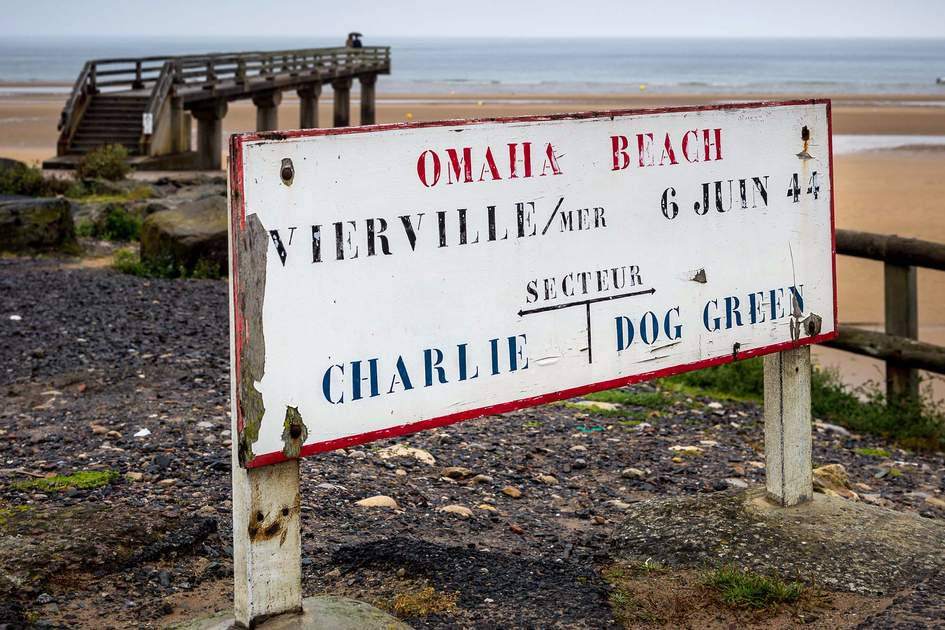 5. Venture into the Pays d'Auge

A day-trip into the Pays d'Auge region to the south of Bayeux, offers an opportunity to discover the gastronomy of the region. This is cheese, calvados and cidre country, and the roads are dotted with local producers offering the chance to try it all, from potent calvados to light, crisp cider. Three of the great Norman cheeses are also from here: Camembert, Pont l’Evêque and Livarot, plus there are delicious hams, terrines and cured meats for carnivores to feast on.

Of all the idyllic green landscapes in Normandy, nowhere are the leaves more lush, the valleys more softly curving or the cows more contented than in the Pays d’Auge. You can be sure your appetite will be sated as you bid au revoir to Bayeux and the region.

Ready to take a trip to Normandy?

Our local experts can help you plan and book fantastic trips to Normandy and destinations around France. To get started, simply get in touch letting us know when you would like to travel and your ideas for the trip. We will then create a tailor-made itinerary especially for you, which can be amended until you are fully satisfied with every detail before you book. You can browse our existing itineraries for inspiration, and remember that all of our pre-planned itineraries can be personalized to suit your specific requirements.

"This was probably the true highlight of our entire trip. Fred's cooking school is located right near Pere Lechaise cemetary which was an added bonus at the end of the day. The school has a maximum of 8 participants and we were a group of 7 which worked... Read more