A marvel of biodiversity, Costa Rica is also a hotbed of volcanic activity. Its Central Valley has four volcanoes that are currently active. The most majestic, Arenal, attracts travellers who explore its slopes and soak in its thermal waters. Here is our guide to Arenal Volcano hot springs. 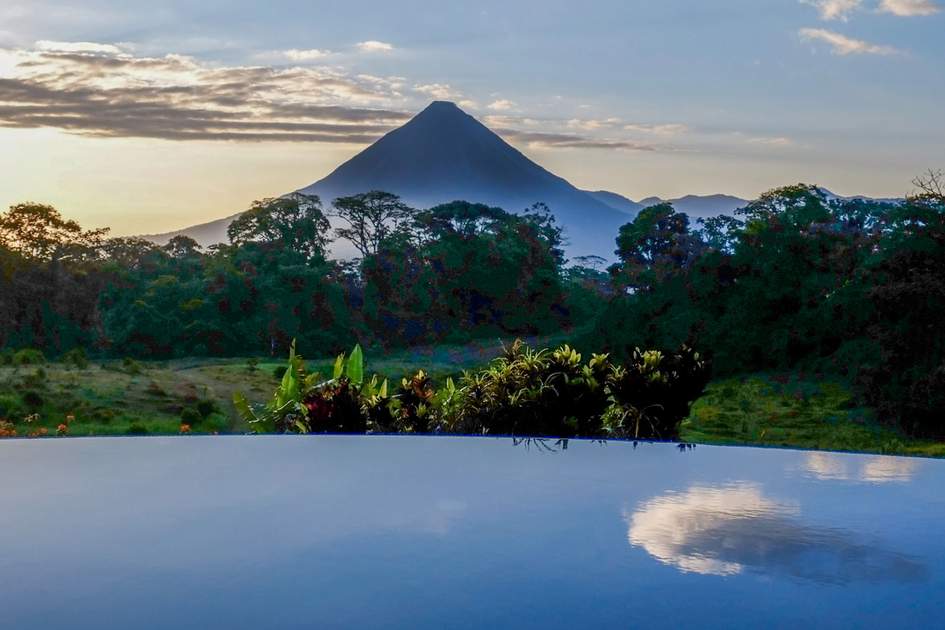 Until early July 1968, Arenal was a low wooded hill, similar to many others near the sleepy town of La Fortuna to the northwest of Costa Rica’s capital San José. One morning local people began to feel earth tremors and the forest began smoking and steaming. Then, on 29 July, Arenal Volcano exploded sending out clouds of gas, red-hot boulders and molten lava. Up to 80 people were killed and more than 5 sq km (2 sq miles) of land near the volcano was transformed abruptly, burying three villages in the process.

Since then, Arenal had been continuously active, until October 2010, when it suddenly stopped spitting out ash and fiery rocks. The volcano is still officially active, but in a ‘resting phase,’ and no one can predict when it may erupt again. Conical and rising abruptly out of flatland vegetation, whether shrouded in clouds or bathed in bright sunshine, Arenal always makes an awe-inspiring sight. However, do not attempt to climb the mountain’s upper reaches – despite being in a resting phase, the volcano still occasionally belches out dangerous gases. 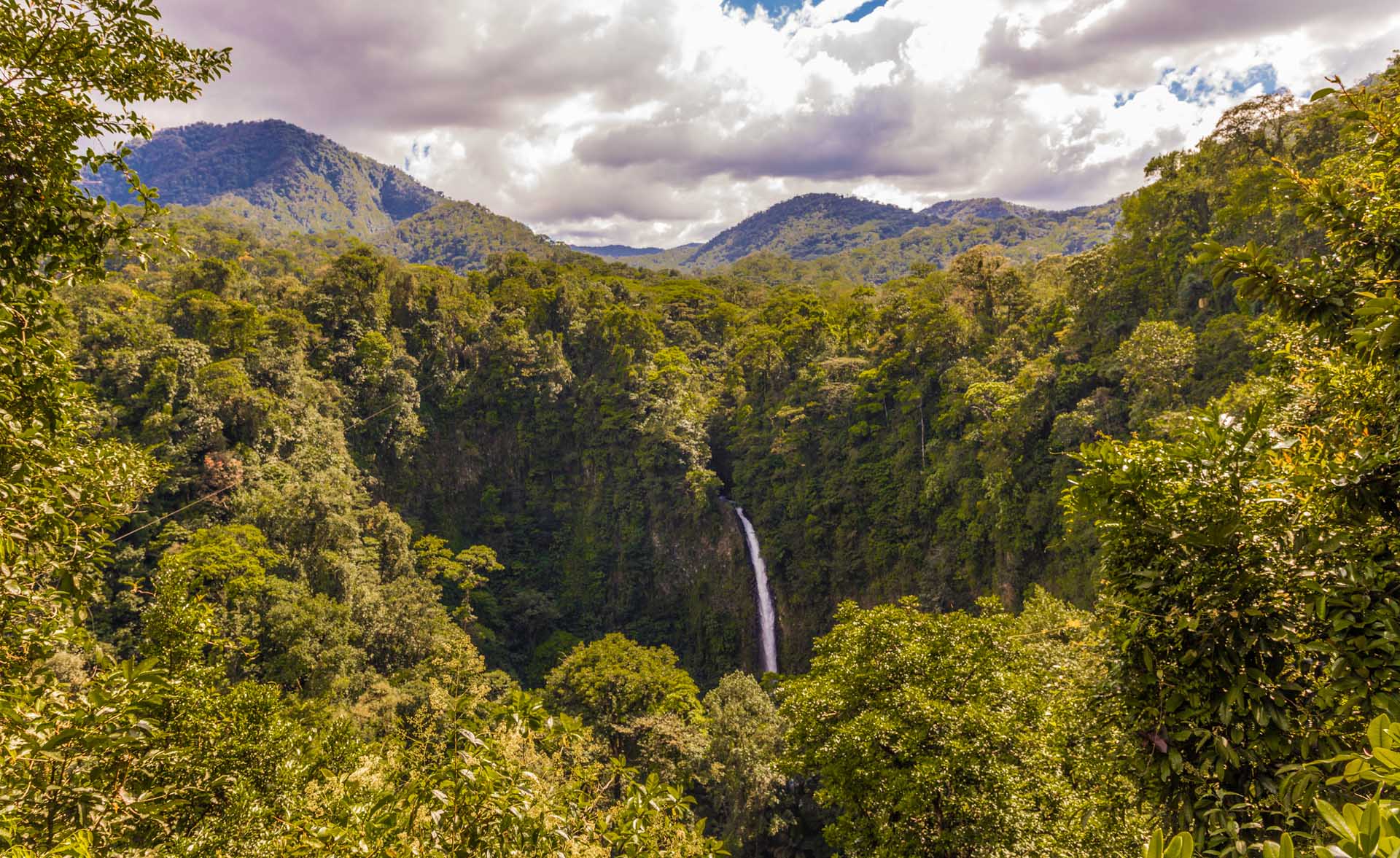 Arenal Volcano sits adjacent to its own lake and is surrounded by a forested national park. Trails following the routes of old lava flows lead through the rugged terrain and hikers regularly encounter wildlife such as howler monkeys and sloths.

After a good day’s hiking, what could be better than soaking in the rejuvenating geothermally heated waters of the region’s hot springs? Between the bustling village of La Fortuna near the base of the volcano and Lake Arenal, there are a number of spots where you can experience the therapeutic effects of volcano-heated pools. The Spanish colonial-style Tabacón Grand Spa Thermal Resort is one of the most popular destinations. From here you can look directly up the volcano’s lava slopes. The volcano appears dangerously close – and it is. Volcanologists have predicted that if Arenal erupts, Tabacón is likely be in the path of the lava flow. Nevertheless, visitors flock here to soak their aching muscles and enjoy the supposed healing properties of the waters, which are naturally heated to an ideal temperature. A dozen pools of varying degrees of heat, up to a steamy 38°C/102°F, are surrounded by waterfalls, slides, tumbling warm-water creeks and beautifully landscaped tropical gardens.

Although the springs are often busy with day-trippers, guests at the elegant hotel can enjoy nighttime volcano views from quiet pools under a starry sky. If that sounds appealing, book well in advance – despite being pricey the resort is still popular.

West of La Fortuna, you can bask in the warm mineral waters of Baldi Hot Springs. Reasonably priced day passes are available including lunch and/or dinner. There are a plethora of pools with varying temperatures and volcano views, as well as a Jacuzzi and sauna. For families, a variety of water slides are guaranteed to keep children well entertained.

Another nearby option, Ecotermales Fortuna is set amongst lush vegetation and fully dedicated to operating sustainably, while the relaxed Termales del Bosque, not far away near San Carlos, has outdoor spring pools in a forest setting alongside a fast-running river. The hotel also offers forest trails, horseback riding, nature tours, and natural spa treatments. 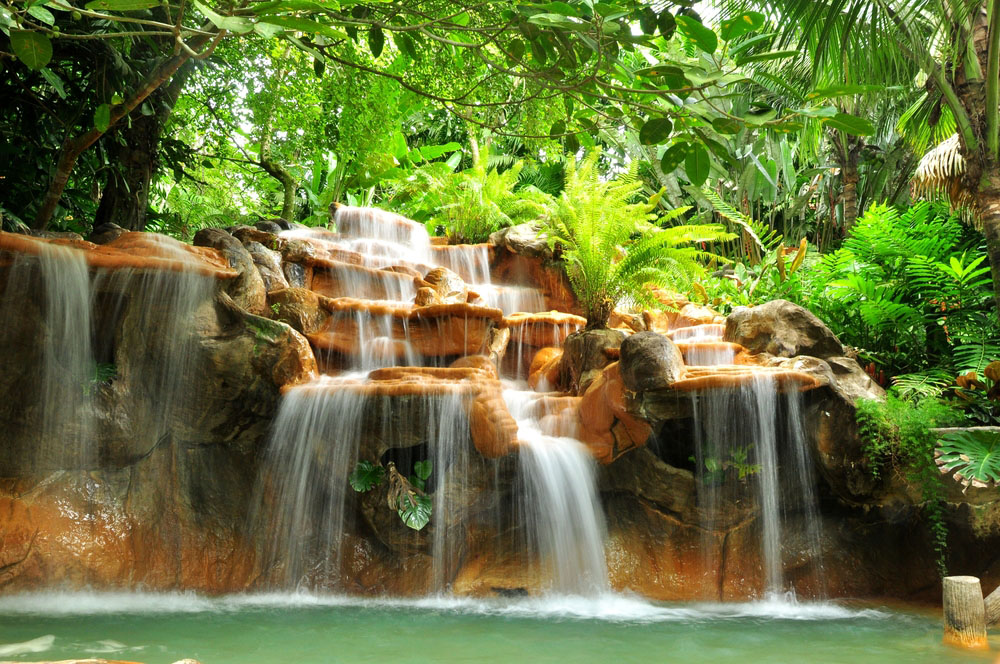 Arenal Lake offers some of Costa Rica’s most challenging freshwater fishing. Whether or not you choose to fish, do charter a boat and a guide to take you sightseeing on the lake. Better still, head out on the waters in a rented kayak. Go in the early morning, when, for much of the year, the lake’s surface is like glass, and the volcano can be viewed as a clear reflection.

Around 5km (3 miles) east of La Fortuna is the turnoff to the Río Fortuna Waterfall. Located in a biological forest reserve, the falls are accessible in an hour’s easy horseback ride from La Fortuna through pastures and fields of bananas and corn. If you are going to drive, the trip requires a 4WD vehicle. Once at the falls, a hike down a slippery slope to the swimming area at the base of the falls makes the clear, turquoise water all the sweeter.

Nearby, the Ecoglide Arenal Park is perfect for adventurous travellers with its treetop ropes course featuring thrilling zip lines and swings set high in the rainforest canopy. 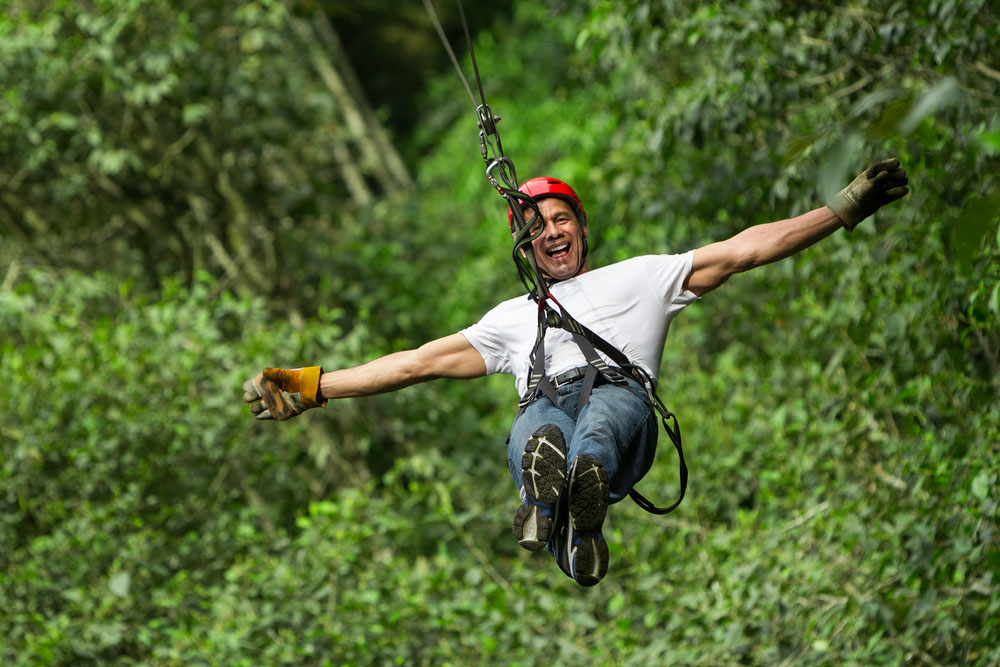 Ready to take a trip to Costa Rica?

Our local experts can help you to plan and book fantastic tailor-made trips to Costa Rica. Simply contact us with details of your ideas for the trip and when you would like to travel. We will then prepare a personalised itinerary especially, based on your preferences. You can amend it until you are completely happy with every detail before booking. You can find inspiration in our existing Costa Rica itineraries, and keep in mind that all our planned itineraries can be fully tailored to suit your own specific requirements.

We recently returned from Costa Rica having had a wonderful experience being guided through local expert. The guide and the driver were fantastic, ensuring that we saw as much of the wildlife as possible and generally had a great time. We cannot recommend... Read more

I love to travel looking for an adventure, experience close contact with nature and variety of local tastes and flavours. However while travelling with family safety and comfort becomes equally important. And of course diversity of entertainment is getting much wider. Finding right balance and making all your holidays dreams come true may be pretty difficult. Yet not this time! Supported by Insight Guides we were travelling in 60 days around Costa Rica (and a bit of Nicaragua, too) enjoying abundance of all kind activities from famous zip-lining, volcanos hiking, waterfalls baths through horseback riding, whale, bird and crocodile watching, kayaking with dolphins to surfing classes, snoorking and scuba diving excursions. And much more! Surely you can arrange everything by yourself. However, isn't much easier and funnier leave this stuff in good hands and take the most of your free time?