The delicious fruit of Costa Rica: know your anona from your zapote

Whether piled high on stalls in the market, served up in a tempting dish or blended into a delicious milkshake, Costa Rica's rainbow of fruits is a delightful feast for the senses. Here's how to make sure you get a taste of them all on your trip. 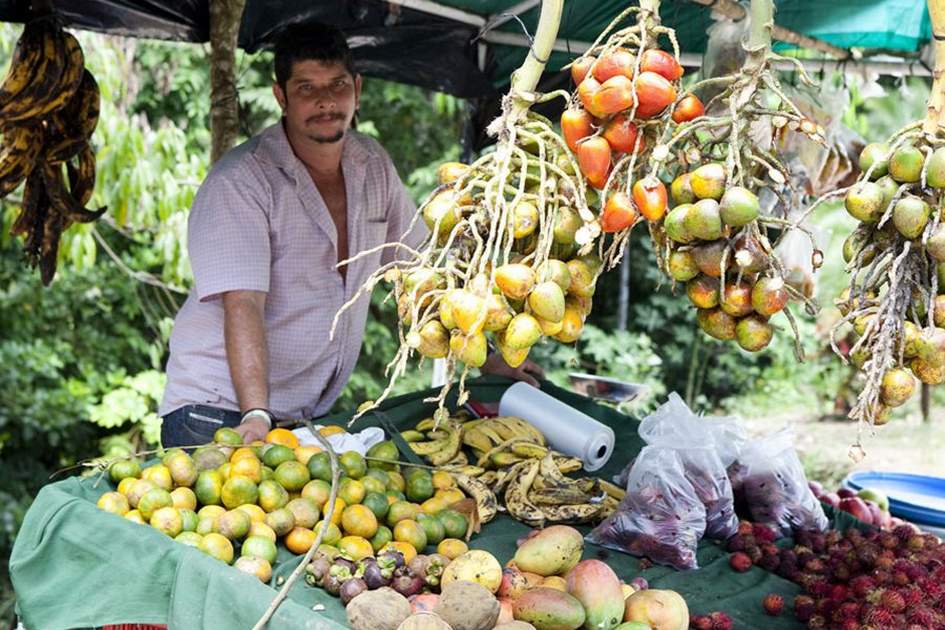 Fernández de Oviedo, a Spanish writer who came to Costa Rica in the 16th century, was probably the first European to chronicle the country’s astounding variety of tropical fruits. Enthusiastic at every new discovery, he pronounced the pineapple the ‘best-looking, most wonderful lady in the vegetable world.’

De Oviedo probably didn’t get to taste all of Costa Rica’s different fruits. There are simply too many, and they are available for every possible taste preference throughout the year. Get up early in the morning in San José and visit the Mercado Borbón, or the dozens of fruit stalls near the Mercado Central. Or go to the open-air produce and fruit markets held on weekend mornings, in almost every town on the Central Plateau, to see and taste the season’s harvest. Along the highways and main roads will be vendors of all kinds of fruit and fruit drinks. Here is our look at Costa Rica’s A–Z of fruits – from anona to zapote.

A strange-looking heart-shaped fruit, also called ‘the bullock’s heart,’ the anona changes from green to a dark reddish-brown as it ripens. The sweet pulp is milk white and contains several large black seeds. After cutting it in half, eat it with a spoon, using the skin as a bowl. The anona is related to the custard apple (anona chirimoya) found in the northern part of the country. It has a delicate sweetness and a delightful fragrance like rose water and was described by Mark Twain as ‘deliciousness itself.’

Breadfruit, like bananas, are grown in the Atlantic region of Costa Rica. This fruit of Polynesian origin was introduced to the West Indies by Captain Bligh of Bounty fame, and the Jamaicans planted it in Limón. An attractive, ornamental tree with large leaves, the breadfruit is an ingredient in many savoury Caribbean dishes. 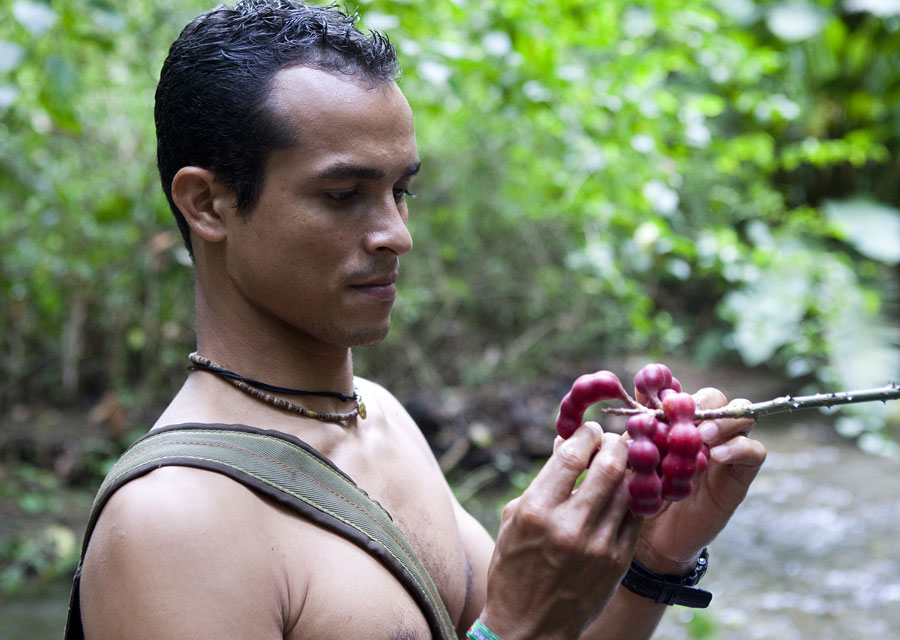 The caimito or Costa Rican star apple looks just like a star when cut, similar in taste to the mangosteen (an exotic fruit found in Malaysia and Thailand). This glossy fruit varies in shade from purple to light green. The sweet flesh is usually eaten fresh, but in Limón you can still find it made into a mixture called ‘matrimony,’ prepared by scooping out the pulp and adding it to a glass of sour orange juice.

An exotic cousin of the mango, the cashew fruit is best known for the kidney-shaped nut attached to its lower end. The fleshy portion, or apple, varying in colour from brilliant yellow to flame-scarlet, is eaten fresh. Its superb colour and penetrating, almost pungent, aroma make this one of the most delectable of all tropical fruits. The flesh is soft, very juicy, and zesty. It is also used to make jam, wine, and a refreshing beverage similar to lemonade, which retains the special aroma and flavour of the fruit. In the late 1970s, the government decided to plant many areas with cashews, for export. The venture was a failure, but the trees are still there.

There was a wonderful side effect, too: parakeets and parrots adore the fruit, and many species that were almost extinct are now increasing their numbers while feeding on abundant cashew apples. Beware – if the nuts are not roasted before being eaten, they are poisonous.

The sweet granadilla (passion fruit) is a favourite all over Central America. It is oval and orange to orange-brown. Within the hard, crisp skin, a bundle of seeds is surrounded by an almost liquid, translucent, and wonderfully tasty pulp. Use a spoon to eat it, or sample exquisite passion fruit juice.

Related to the anona, the guanábana is unrivalled for its use in sherbets and refreshing beverages. Foreigners find the flavour somewhat suggestive of a combination of pineapple and kiwi, but Ticos consider that to be heresy.

A bestselling book by the acclaimed Colombian writer Gabriel García Márquez has the provocative title The Fragrance of Guava. You will better understand how the title elicits the Latin American experience if you visit a home when guava jelly is being cooked, and the entire house fills with the aroma. But cooking is not obligatory; you can simply eat the guava raw.

Another fruit, called in English ‘Costa Rican guava’ (cas), is round, yellow, and has soft white flesh. It is acidic but highly valued for jelly-making and for drinks. If you see it on a menu, try a freshly squeezed jugo de cas (cas juice). 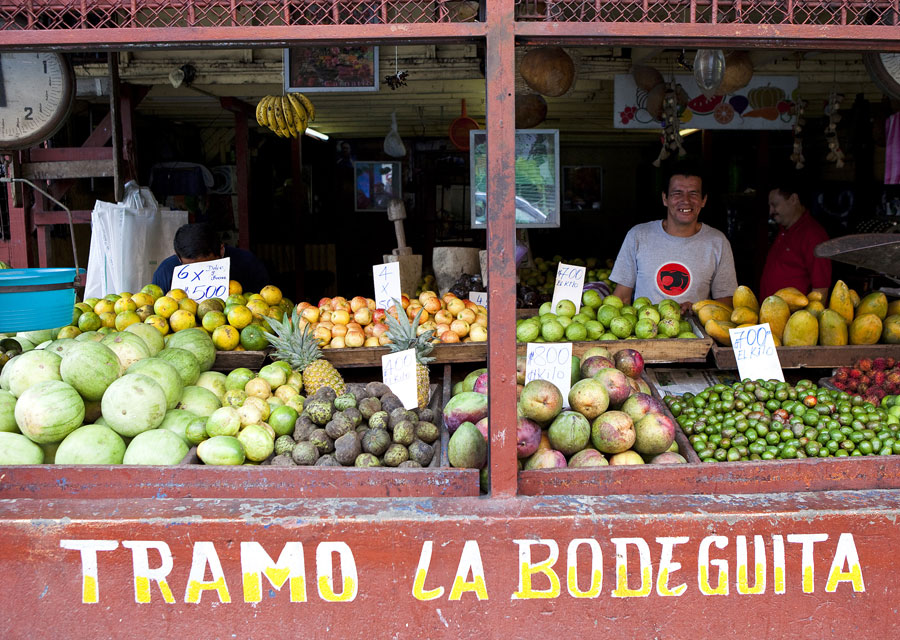 The loquat (níspero) is a small, oval-shaped fruit with a large stone, pale-yellow to orange in colour. It is also called the Japanese medlar. The flesh, firm and meaty in some varieties, melting in others, is juicy, with a sprightly acid flavour. Although commonly eaten fresh, it can also be used in cooking.

Alajuela’s Central Park is full of mango trees with their tempting fragrance, which is why the town, second in size only to San José, is known as Mango City. Alajuela’s mangoes are sweet, firm, and delicate. The ripe ones are sweeter and spicier, but smaller and softer than the unripe ones. The aroma is spicy and alluring. Few other fruits have a background as developed as the mango, and few others are so inextricably connected with religious beliefs. Buddha is said to have been presented with a mango grove, so that he might find rest beneath its graceful shade.

Besides eating them as dessert fruits, Costa Ricans make mangoes into chutney, as well as preserves, sauces, pies, and juices.

The Spaniards said the mombín (or jocote) was a type of plum when they first saw it, but it has nothing in common with the plum. This fruit is juicy and spicy, unlike any other. The tronador is the best variety. Street vendors sell brown paper bags full of mombínes from August to October, the colour varying from dark green to bright red, depending on ripeness. The mombín is usually eaten fresh, as is its yellow-version cousin.

The coco-plum (icaco), on the other hand, is never eaten fresh, but its white flesh is made into a sweet preserve, called miel de icaco. Another cousin, the ambarella (yuplón), was brought to Jamaica by Captain Bligh. It came to Costa Rica in the hands of Jamaican immigrants to Limón. It is eaten uncooked, with a little salt, or made into a preserve.

The small, round yellow fruit known as nanzi (nance) has been popular among Costa Ricans since pre-Columbian times, but foreigners tend to find its smell too strong. It is used for preserves, wines, and jellies. Nances en guaro (nanzis in liqueur) are very good. Left to ferment in liqueur for nine months, they take on an amber-brown colour. 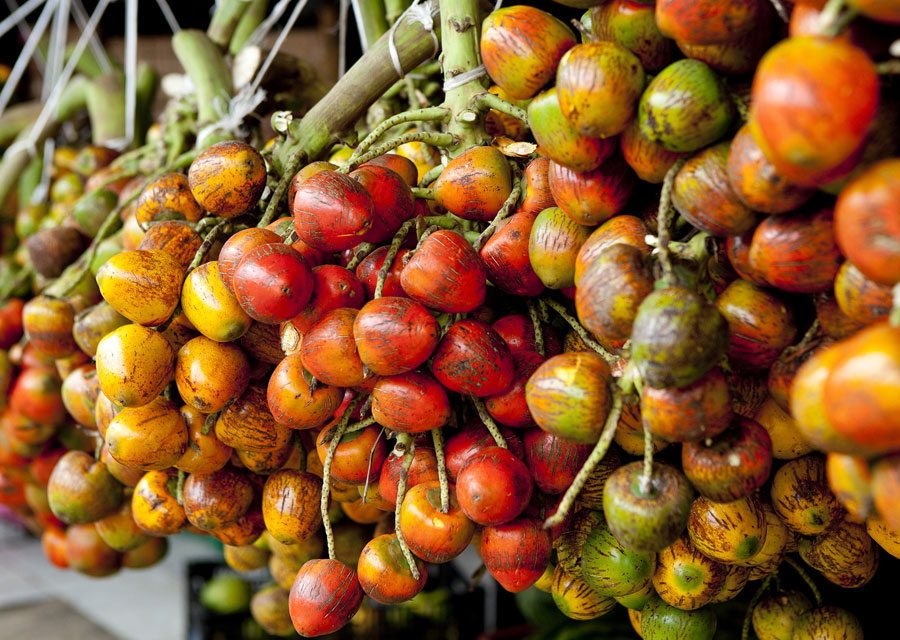 Papaya (or paw-paw) grows almost everywhere in the country, and most visitors are particularly enamoured of a drink called papaya en leche, a sort of papaya milkshake. There are two varieties: the huge local papaya and the smaller, sweeter Hawaiian version. Papaya is also excellent as a meat tenderiser.

More a vegetable than a fruit, this was a treasured food of the aboriginal peoples. You will surely see it on the fruit stands, with its glossy orange skin and black stripes, resembling a large acorn. Cooked and peeled, its yellow pulp tastes very good when a little mayonnaise is added to it to soften the rather dry texture. It cannot be eaten fresh. Cream of pejibaye soup is one of the most exceptional dishes in Costa Rican cuisine.

The most exotic sight in a fruit market in Costa Rica has to be the rambutan (mamon chino). The bunches of red and orange fruits, sometimes called ‘hairy lychees,’ look like gooseberries covered in fleshy spines. To eat them, simply cut the leathery rind with a sharp knife and pull it back from the pulp.

The fragrance of the guava is rivalled only by that of the rose-apple (manzana rosa), a beautiful round fruit, whitish green to apricot-yellow in colour, and perfumed with the scent of the rose. The flesh is crisp, juicy, and sweet. As a preserve or crystallised, it is delicious. If you eat it fresh, don’t overdo it because the seeds are poisonous when eaten in large quantities.

A relative of the rose-apple, the ohia or water-apple (manzana de agua) is a beautiful oval fruit, white to crimson in colour. Its flesh is apple-like: crisp, white, and juicy but not very tasty, whereas ohia jam is exquisite. 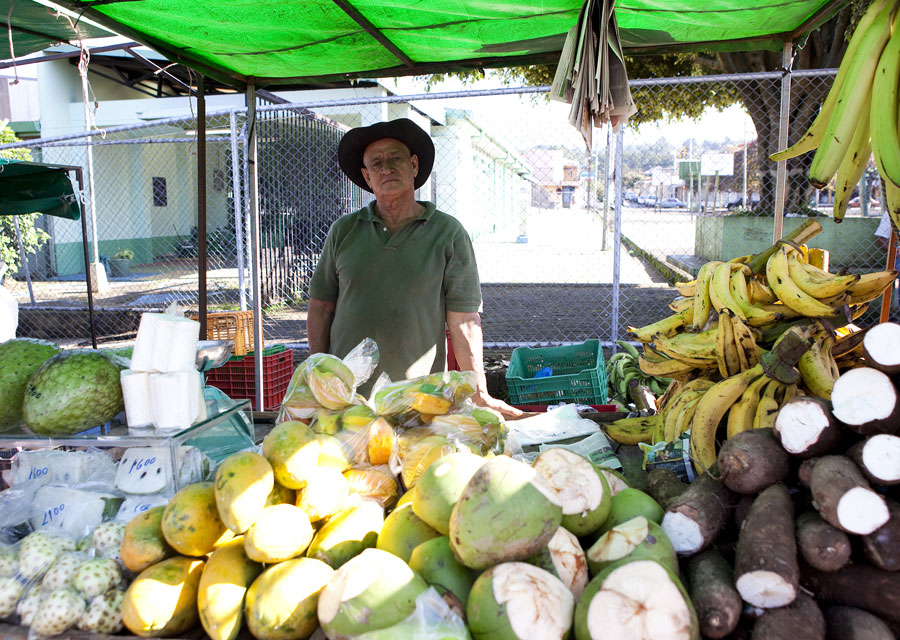 One of the best fruits of tropical America, from the province of Guanacaste, is the sapodilla or naseberry, here called chicozapote or níspero. It is a dessert fruit, rarely cooked or preserved in any way. The French botanist Michel Descourtilz described it as having the ‘sweet perfumes of honey, jasmine, and lily of the valley.’

A relative of the sapodilla, the mammee-sapota or marmalade-plum (zapote) kept Cortés and his army alive on their famous march from Mexico City to Honduras. The bright salmon-red colour of the pulp catches the eyes of tourists walking along the Avenida Central in San José. Street vendors, knowing the sales appeal of the beautiful colour, cut the marmalade-plums into halves to entice passers by.

Beware, however, that if you are not used to the very sweet fruits of the tropics you may find the flavour of the tempting zapote rather cloying. Very ripe zapotes are used to make the most wonderful ice creams and sherbets – try one if you get the chance.

Ready to taste tropical fruits on a trip to Costa Rica?

Our local experts can help you to plan, organise and book fantastic tailor-made trips to Costa Rica. Simply contact us with details of your ideas for the trip and when you would like to travel. We will then prepare a personalised itinerary based on your preferences. You can amend it until you're happy with every detail before you book. Seek inspiration in our existing Costa Rica itineraries, and keep in mind that all our planned itineraries can be fully tailored to suit your specific needs.

We recently returned from Costa Rica having had a wonderful experience being guided through local expert. The guide and the driver were fantastic, ensuring that we saw as much of the wildlife as possible and generally had a great time. We cannot recommend... Read more

We used the service to plan a week long trip to Costa Rica. They put us in touch with local guides and from there we were able to plan an eventful itinerary. Communication was easy and seamless. We had no issues while in Costa Rica. My experience went above my expectations and have already recommended them to several friends and family members for their next vacations.