The azure waters off Croatia’s craggy coastline are dotted with more than 1,200 islands. Around 50 are inhabited, boasting largely untouched beauty, stunning Adriatic views and some of the country’s finest beaches. Here is our selection of the best Croatian islands. 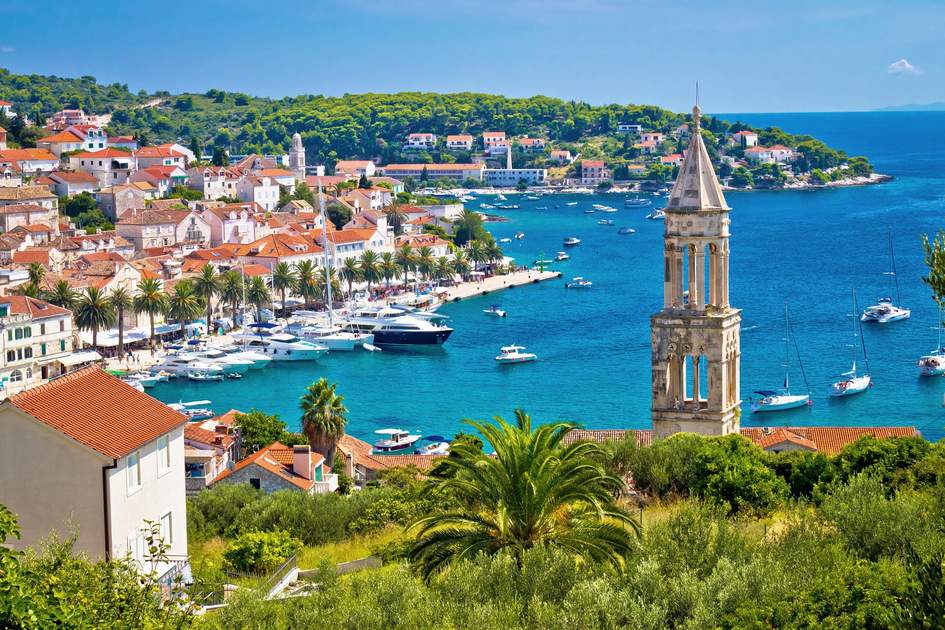 Home to around 12,000 people, Hvar is renowned for its fine red wines (the sought-after Plavac grape grows here) and fragrant lavender fields. It is also home to the Unesco listed Stari Grad Plain, an agricultural area created by the Greeks in the 4th century that remains largely unchanged today. The Venetians, who occupied Hvar during the 15th and 16th centuries, left a unique architectural and cultural legacy on this beautiful island.

Hvar town enjoys an idyllic setting in a protected bay, with its old town unfolding over a pine-covered slope that reaches down to the water’s edge. In high season, the town harbor is busy with gleaming yachts and tour boats, while the chic bars and cafés that line it spill out onto the pavements. Next to the harbor, the broad piazza is the focal point of the town – and the setting for nightly promenades during the summer. Overlooking the square, St Stephen’s Cathedral is built in the Venetian Renaissance style and features a striking bell tower, while up the hillside, old family palaces bear testimony to the prosperity of this Venetian trading town when it was a stopping point for northbound ships en route to the metropolis.

Numerous boat operators run day trips to the Pakleni Islands where you can explore secluded beaches and rocky coves with clear waters that are perfect for swimming and snorkeling. Popular islands to visit include Sveti Klement, Marinkovac and Jerolim. To get to Hvar from Split by ferry, it takes just over one hour.

Explore the island for yourself as part of Insight Guides' Sailing Croatia’s Adriatic Coast trip. 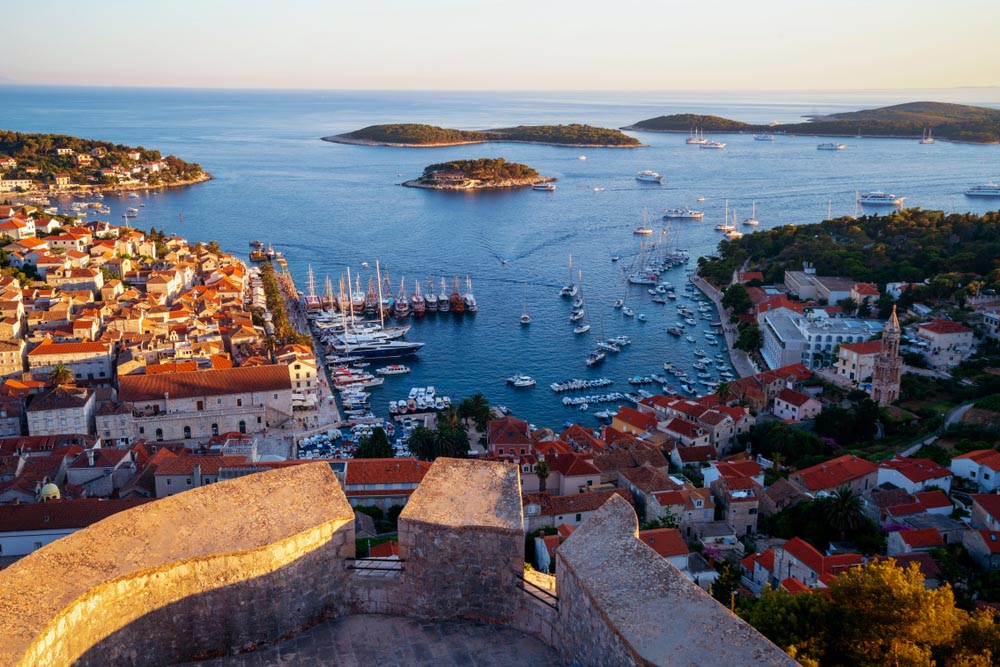 According to Greek mythology, Ulysses was shipwrecked on the island of Mljet after encountering a storm when returning from the Trojan Wars. Enchanted by the island’s beauty, he went on to spend seven years wandering its forests and craggy coves. The east of the island is home to forested Mljet National Park, with two stunning saltwater lakes and a quaint monastery set on an island. Cycling and walking paths lead around the lakes and off through the pine forests to the village of Pomena, home to a cluster of restaurants and a hotel. Cars are not allowed in the national park, but it’s easy to rent bicycles. Mljet Island is around a one-hour ferry ride away from Dubrovnik. 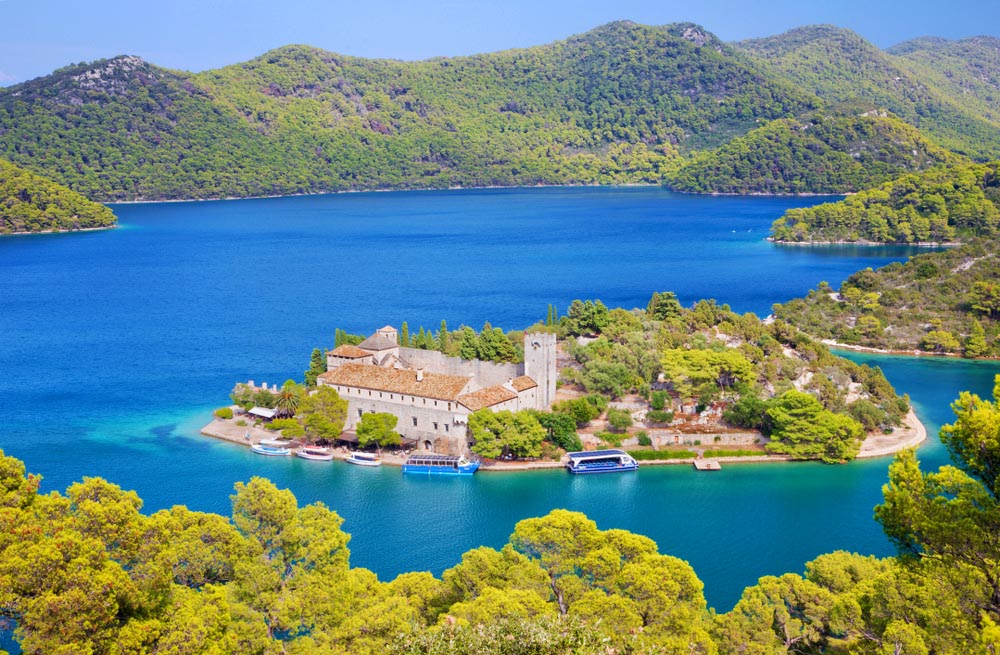 Located at the southern end of Croatia’s dramatic Dalmatian coast, Korčula is thought by many to be the birthplace of Marco Polo. Korčula’s walled old town is a fantastically well-preserved medieval settlement set on its own peninsula and crowned by an ensemble of terracotta-hued roofs and spires. Its most impressive building, St Mark’s Cathedral, is constructed, like many of Korčula’s buildings, from the island's mellow limestone and features a tower and cupola dating from the 15th century. Climb the tower for sweeping views of the Adriatic and surrounding islands. Not far from away you can visit the Marco Polo Tower adjoining the building where the explorer was said to have been born in 1254. The adjacent graceful palace now houses a museum dedicated to Marco Polo.

Once you’ve taken in the sights, relax on the beaches around the town. Luka Korculanska, a safe sandy beach with shallow water, is a 15-minute walk away, and there are several other good beaches just a short drive away, near the town of Lumbarda, in the south of the island. 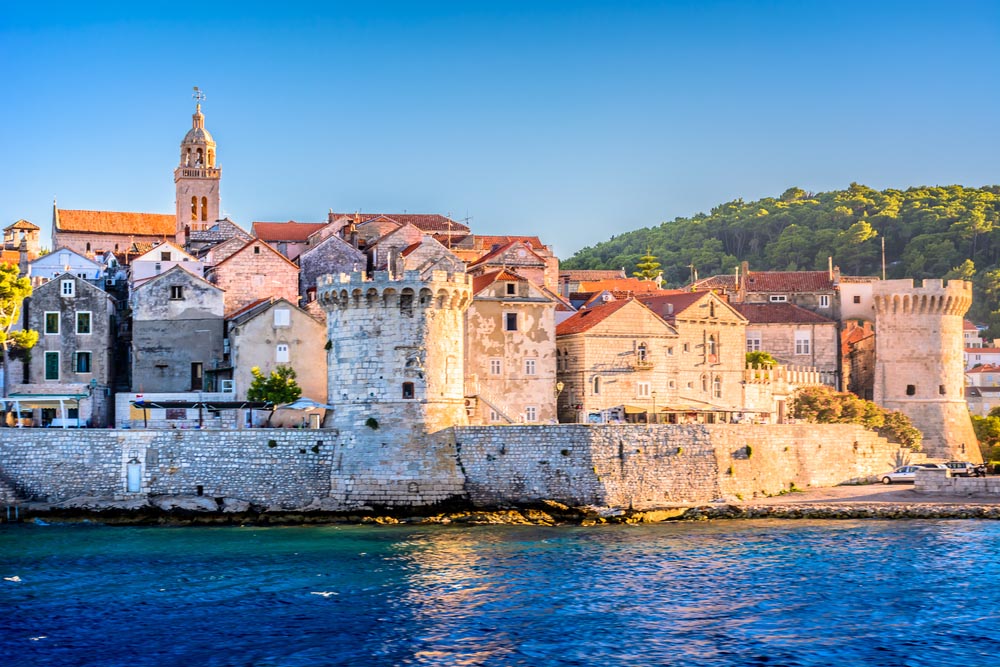 Korčula, Croatia – thought to be the birthplace of Marco Polo. Photo: Dreamer4787/Shutterstock

For centuries, Brač, Croatia’s third-largest island, has made a living from the limestone dug from its rugged hills, but these days tourism is equally important as quarrying. The island is home to the country’s most famous beach, Zlatni Rat, also known as the Golden Horn. This iconic beach with its backdrop of pines makes for a dramatic sight. Located near the town of Bol, it is made up of two adjoined banks of white sand that jut out into the ocean and meet, forming an arrow-shape. One of Croatia’s best beaches, it attracts huge crowds at the height of summer, but many visitors are day-trippers from Split and Hvar – so it is best to stay overnight, that way you can arrive early and leave late.

The small town of Bol merits visiting in its own right, with its streets of tightly packed houses, trio of large hotels and 15th-century Dominican monastery. Windsurfing is also popular in the waters off Bol. Brač lies off the coast near Split, and is easily accessible via ferry, with most visitors arriving at the island’s main town of Supetar. 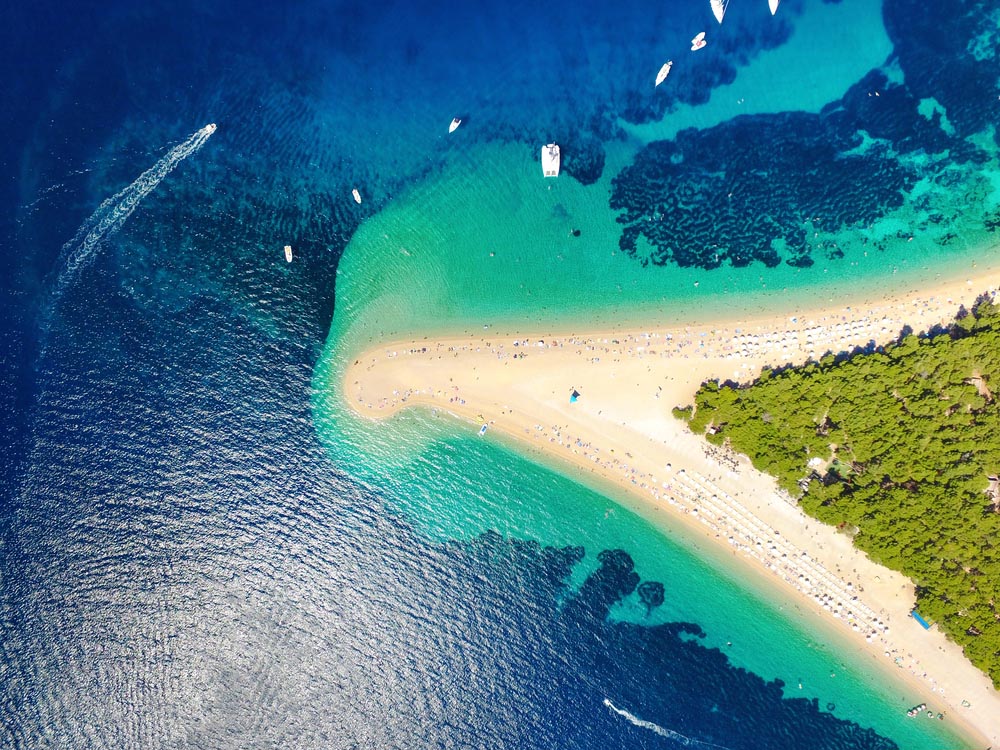 Located just a short boat ride from Dubrovnik, this quaint archipelago makes the perfect day trip for those who want to escape the bustle of the 'Pearl of the Adriatic'. There are 13 islands in total, but just three that are inhabited – Koločep, Lopud and Šipan. The main attractions of Koločep are to wander through pine forests and relax on the beach at Donje Čelo.

Slightly further west, Lopud had its own fleet of vessels and a shipyard in the 15th century. The island's town, gathered around a bay, has several grand old palaces, a Franciscan monastery and a few hotels. From the restaurant-lined harbor, a path marked Plaža Sunj leads for about half an hour through pine-scented woods to a lovely sandy beach at Sunj Bay. Šipan, the largest of the Elafitis, a 90-minute trip from Dubrovnik, is the most agricultural of the islands, with small vineyards and olive groves. 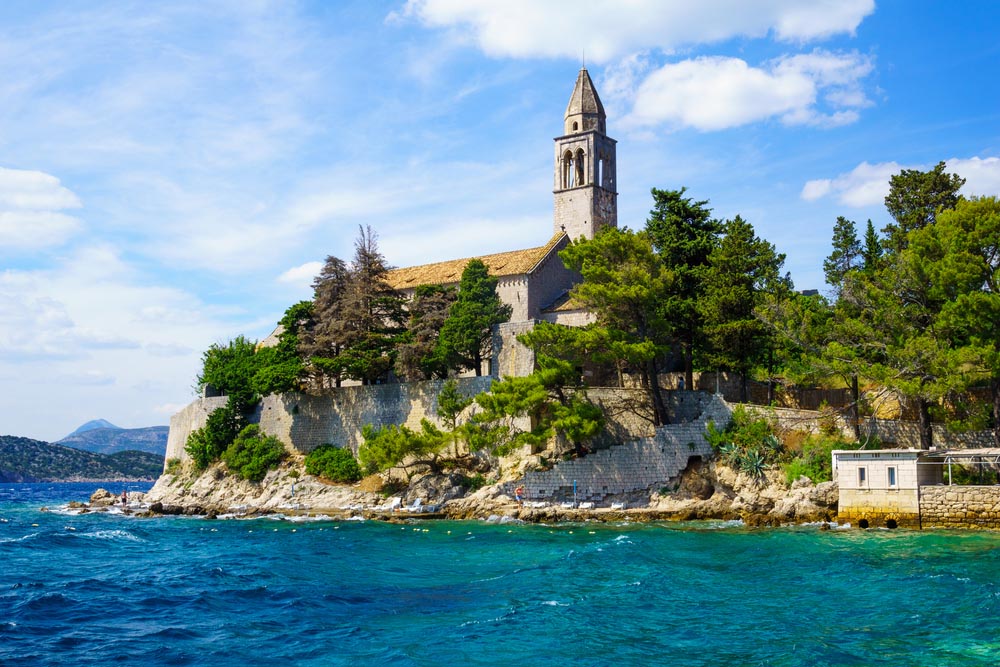 Cres narrowly beats neighbouring Krk to the title of largest island in Croatia, and is supposedly where Jason and the Argonauts came in search for the Golden Fleece. Today, Cres town crowds around Cres Bay in the verdant northern half of the island. The town still owes much of its livelihood to fishing, and dining in its restaurants is a treat. Choose between the fresh seafood catch and the delicious lamb for which Cres is renowned. Highlights of the town include the Church of St Mary of Snow, with its 15th-century relief of the Madonna and Child, a Venetian loggia, a Franciscan monastery, and a museum in the old town housing Roman artefacts.

The island is home to more than 500km (310 miles) of walking trails that wind and weave their way through abandoned hamlets, pine forests, caves and beaches. 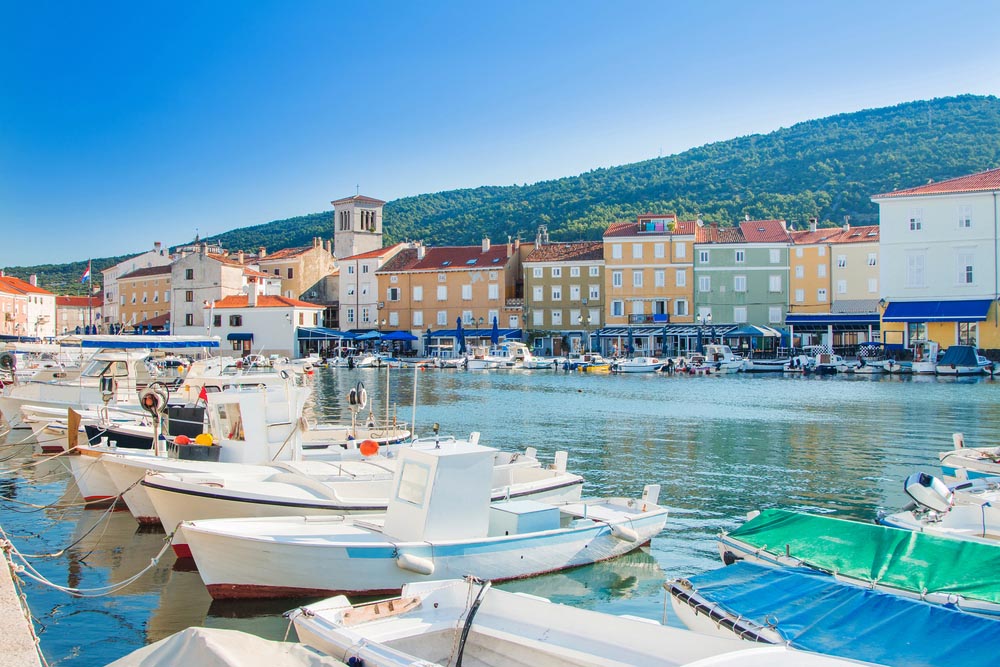 The town on the island of Rab is a dazzling medieval oasis of church spires and winding streets on a narrow peninsula surrounded by crystal clear waters. Whether you prefer exploring the churches or swimming off the pine-shaded beaches, it is hard not to fall in love with the place.

Maybe the most magnificent of the four campaniles in Rab belongs to the 11th-century Cathedral of the Holy Virgin Mary’s Assumption tucked towards the end of the peninsula. You can climb the 25-meter (82ft) -high bell tower for sweeping views of Rab town and the surrounding area, but it is also worth taking time to savor the calm simplicity of the church’s interior.

Away from its churches, Rab town is perfect for aimless wandering. Its warren of medieval streets is enlivened by small bars and shops, and opens out onto café-lined squares with glimpses of the sparkling Adriatic around every corner. Even at the height of summer, the old town is quiet during the day as its many visitors are either at the peninsula's beaches or on one of the boats lined up along Rab town’s wide waterfront every morning, offering a huge selection of day trips. At night in high season things are a different proposition, as people crowd the streets and a number of nightspots rock into the early hours. 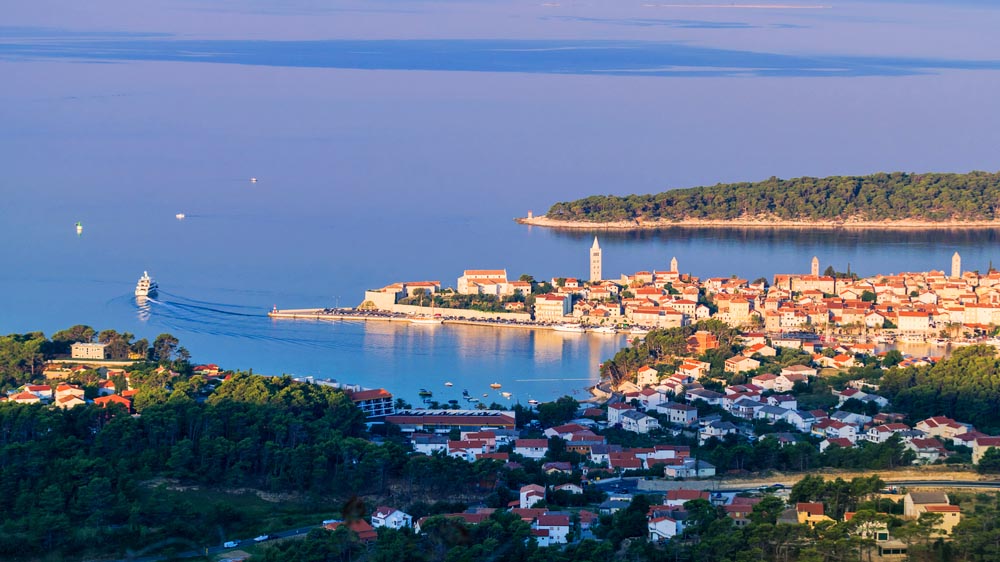 Croatia has more than a thousand islands peppering the waters off its coastline, some of which you can discover as part of an unforgettable journey. Our local experts can plan incredible trips in Croatia for you. Simply get in touch to share your ideas for the trip and let us know when you would like to travel. We will then prepare a personalized itinerary, which you can amend until you are happy with every detail before booking. Check out our existing itineraries for inspiration, and keep in mind that all of our planned itineraries can be tailored to suit your needs.

I just wanted to thank you again for a fantastic trip. You made my husband's birthday vacation wonderful. Every driver and every guide was professional, knowledgeable and fun. They made the tours delightful! The hotels were amazing and every arrangement... Read more

I just wanted to thank you again for a fantastic trip. You made my husband's birthday vacation wonderful. Every driver and every guide was professional, knowledgeable and fun. They made the tours delightful! The hotels were amazing and every arrangement went perfectly. I'll be recommending your agency to every friend and family member that goes to Croatia. And the next time we go back we'll contact you again. Thank you for a beautiful and memorable trip!