Corona Virus important information
What To Do in Cuba | Insight Guides

What to do in Cuba

The Caribbean island of Cuba thrills the senses, befuddles the mind and tugs at the heartstrings. A country on the cusp of change, now is the time to visit. Insight Guides have put together a list of 10 things that you won’t want to miss while you’re there. 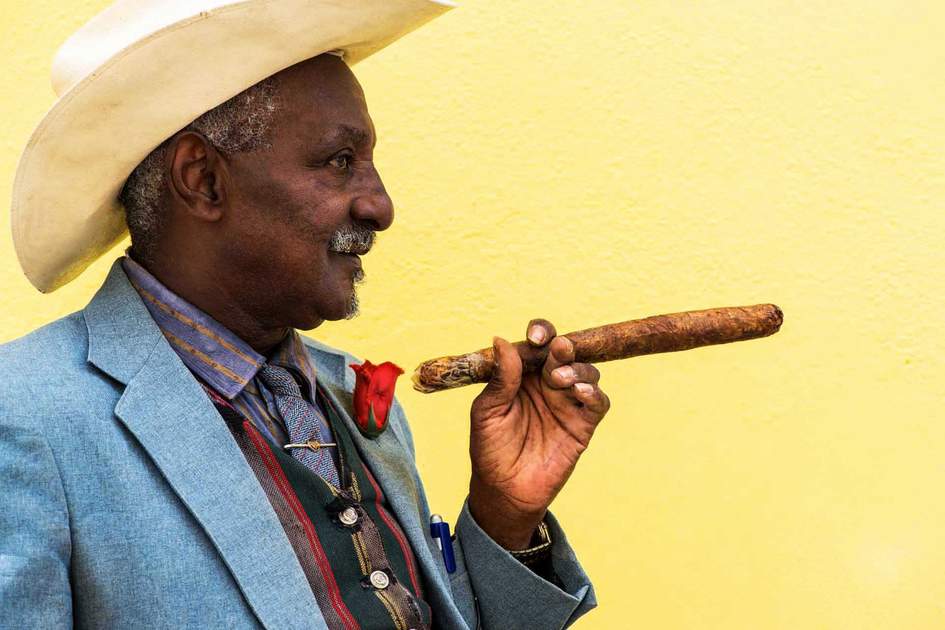 Cigars are produced and smoked in Cuba in great quantities. Photo: Shutterstock
PrevNext

A UNESCO World Heritage Site, Trinidad is one of the most beguiling towns in Cuba. It's a place of great architectural interest, full of atmosphere, color and music. Located in Sancti Spíritus province, Trinidad is Cuba’s third-oldest settlement. Its red-tiled roofs, pastel-colored buildings and cobblestone streets make it a must-see on any itinerary. 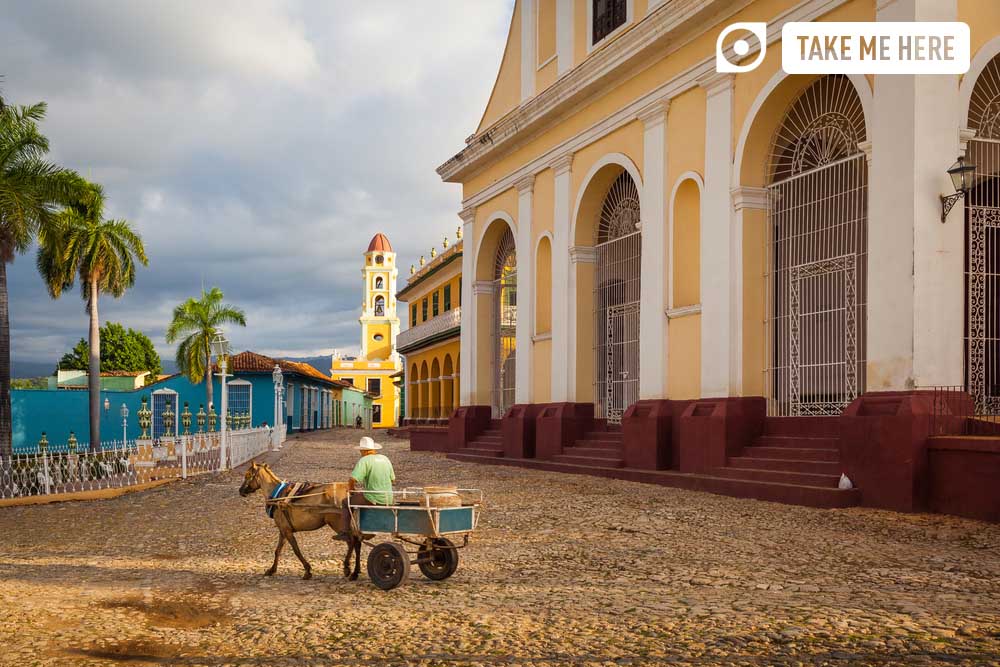 The Museo de la Revolución is housed in the former Presidential Palace, which accommodated all of Cuba’s presidents, from its completion in 1913 until 1957. It was then that Batista built the current Palacio in what is now the Plaza de la Revolución. The memorabilia on display is laid out in quasi-religious reverence in the museum’s splendid rooms. It paints a vivid picture of the Revolution, and the earlier struggle for independence. Blood-stained uniforms from the failed attack on the Moncada Barracks in 1953 are on show, as well as the heavy black coat that Fidel wore during his infamous ‘History will absolve me…’ speech. The exhibits are getting rather worn, and the displays are old-fashioned, but that’s all part of the museum's charm. 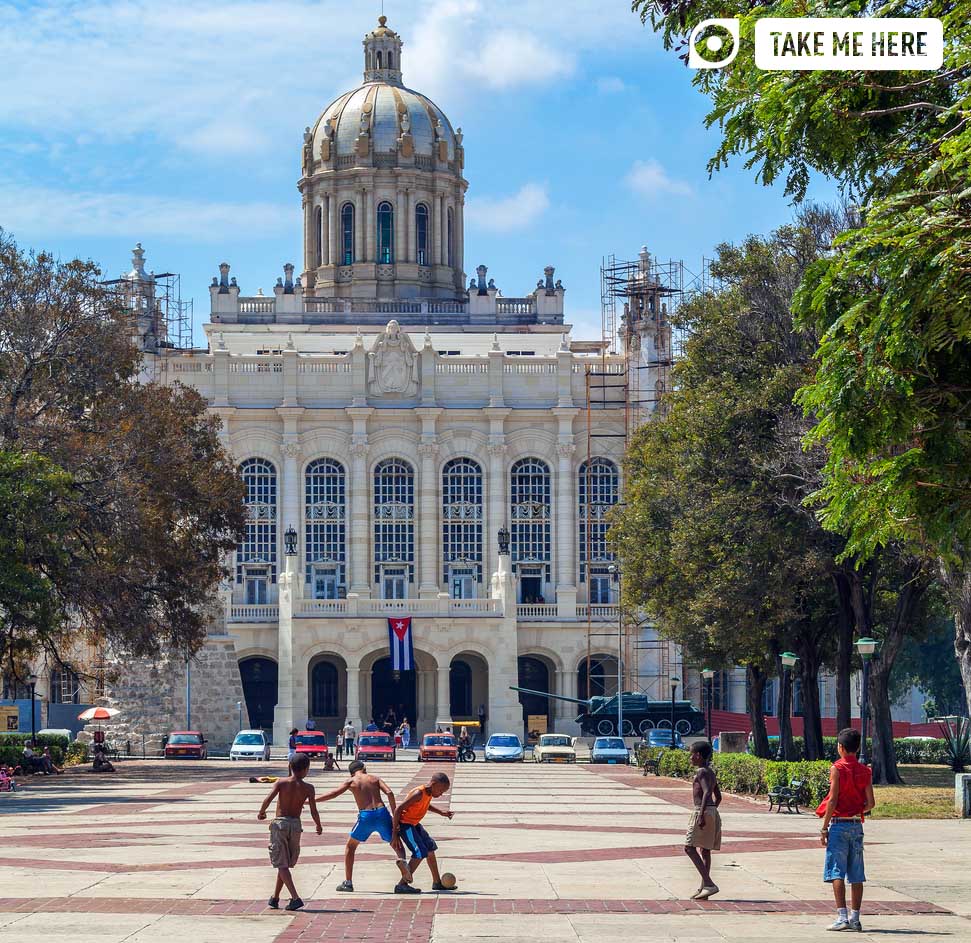 When the mists hang over the tobacco fields of Valle de Viñales, leaving only the tops of the palm trees and the sheer-sided, limestone mogotes on view, it is one of the most beautiful places on earth. This is Cuba's tobacco heartland. Physically, it is dominated by a string of imposing, rounded limestone mountains – mogotes. In their shadows are lush green tobacco fields – vegas. Everything here is done by hand, from the picking of the leaf to the rolling of the cigars. In some vegas, linen nets protect the plants from the sun.

Bullock carts are often the main form of transportation and regularly block traffic on roads. Oxen are used for ploughing the tobacco fields as their hooves do less damage to the soil than tractors. Thatched casas de tabaco, with steeply pitched roofs for drying the leaves, still dot the landscape. The villages are small and dreamy, each with a crumbling colonial church, palm-fringed plaza and the inevitable bust of Cuban national hero José Martí. 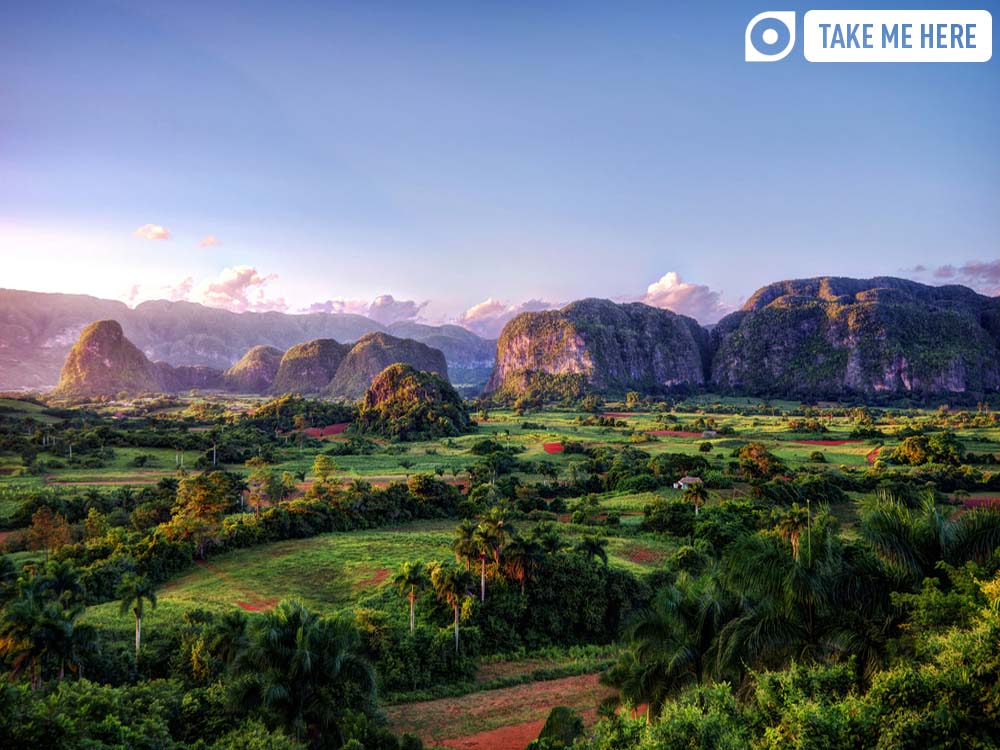 The Casa de Velázquez, located in Santiago de Cuba, is the oldest house in Cuba. It's also home to a fascinating museum, the Museo de Ambiente Histórico Cubano. A solid-stone structure with Moorish-style screen balconies, glorious cedar ceilings (alfarjes), floor-to-ceiling shutters and two lovely courtyards, the house was built between 1516 and 1530. Among its collections are European tapestries, crystal, paintings, ceramics and antiques. Peñas (musical performances) are sometimes held here, and you may hear musicians practicing in the courtyards.

5. Pay your respects to Cuba’s most iconic former leaders

Most of Cuba’s famous sons and daughters, including Fidel Castro and José Martí, are buried at the Cemeterio Santa Ifigenia in Santiago de Cuba. Here you will find an eclectic mix of mausoleums and graves. Once segregated by race and social class, the cemetery is home to both huge mausoleums and unpretentious graves, including the tomb of Castro. The legendary leader’s remains were interred here on 5 December 2016 following a cross-country procession that retraced the victorious 1959 march of the revolutionaries. A huge rounded boulder with Castro’s ashes inside bears a simple black plaque with just one word – ‘Fidel’.

The most impressive tomb belongs to the patriot José Martí, whose marble vault has the figures of six women carved around the outside, bearing the symbols of Cuba’s provinces. Buried within the mausoleum is earth from each of the Latin American countries inspired by Martí to assist in the independence struggle; the countries’ names are inscribed on wall plaques. The national flag is draped over Martí’s sarcophagus, which is positioned so as to catch the sun throughout the day. 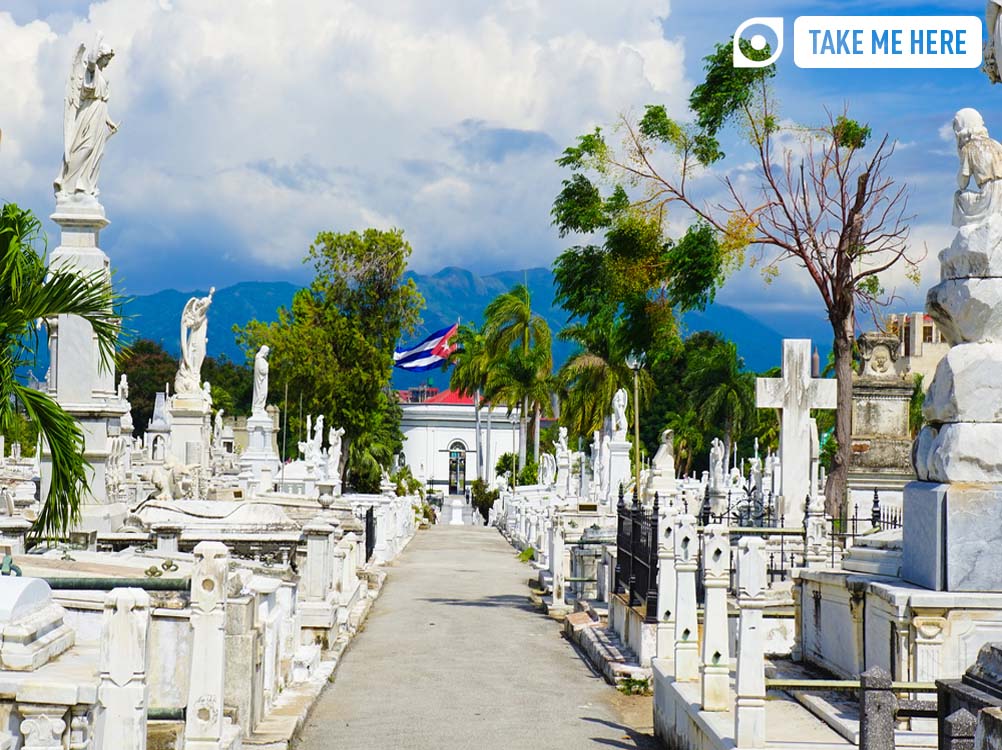 Fans of revolutionary history should make the pilgrimage to this giant monument, with its dramatic statue, the bas-relief of Che’s letter to Fidel on leaving Cuba for Bolivia, and the mausoleum where the eternal flame burns for Che and his comrades interred here.

The bronze statue shows the giant figure of Che, depicted with his arm in a sling – broken when he fell from a building during the 1958 battle for Santa Clara – and bears the legend ‘Hasta La Victoria Siempre’ (Ever Onward to Victory). Beneath Che’s statue is the mausoleum, where the remains of Che and 29 of his co-revolutionaries were interred in 1997, after being recovered from Bolivia. By Che’s resting place, a lamp casts a light in the shape of a five-pointed star, and the eternal flame (originally lit by Fidel) burns. Few visitors fail to be moved by the aura of reverence.

7. Learn how sugar cane is pressed

The Manaca-Iznaga estate is well worth a visit. You can't miss the farm, as it is splendidly indicated by the Torre de Manaca-Iznaga, 10 miles (15km) from Trinidad, which rises proudly out of the green cane fields. Legend has it that the tower was built after a bet between two brothers, in which one had to build a tower higher than the depth that the other could dig a well. In actual fact, the building was originally designed as a watchtower from which to observe slaves working in the fields. Birds of prey circle on the thermals, and a refreshing wind cools you as you climb up above the valley floor.

The immaculate hacienda is an excellent place for a drink of guarapo, the freshly pressed sugarcane juice that is milled by Cuba’s only original trapiche (sugar press) remaining in situ. There are also demonstrations of sugar cane pressing, in which you can participate.

Learn more with a tour of the old sugar mill, as part of Insight Guides' Highlights of Cuba: Havana, Trinidad and Cienfuegos trip. 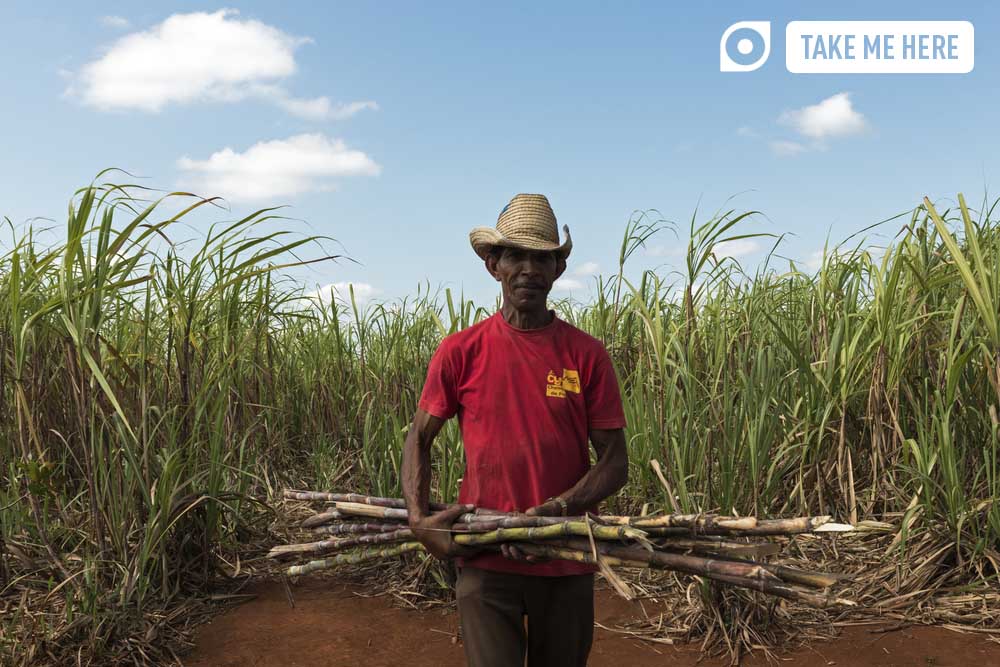 8. Relax on the pristine sands of Cayo Sabinal

Just north of the city of Camagüey, Cayo Sabinal is home to a wildlife reserve – protecting flocks of flamingos and many endangered birds – with deserted, pristine white-sand beaches. The cay has more than 20 miles (30km) of empty sands. At Playa Los Pinos there is simple accommodation and a restaurant.

The waters are also renowned for the quality of the diving. Scuba devotees recommend the area for the sheer variety of marine life at underwater sites, with 33 known shipwrecks just off the coast.

9. Take in the site of ‘The First Imperialist Defeat in Latin America’

The village of Playa Girón holds an important place in Cold War history, as the site of the United States’ disastrous Bay of Pigs invasion, about which you can learn in the commemorative Museo de la Intervención. Outside, stand a couple of tanks used in the defense. Inside are two rooms displaying documents, photographs, weapons and an array of artifacts, including a map showing the mercenaries’ route from Puerto Cabezas, Nicaragua.

The village is low and spread out. Its western side is a sanctuary for local fauna: flocks of flamingos and spoonbills can be seen, feeding in the shallow salty lagoons, alongside other waders such as white ibises, black-necked stilts and sandpipers. At Playa Girón itself, you can swim and snorkel off the beach or at several spots along the shore where the waters are shallow.

Take in this important site as part of Insight Guides' Cuba: A Feast for the Senses trip. 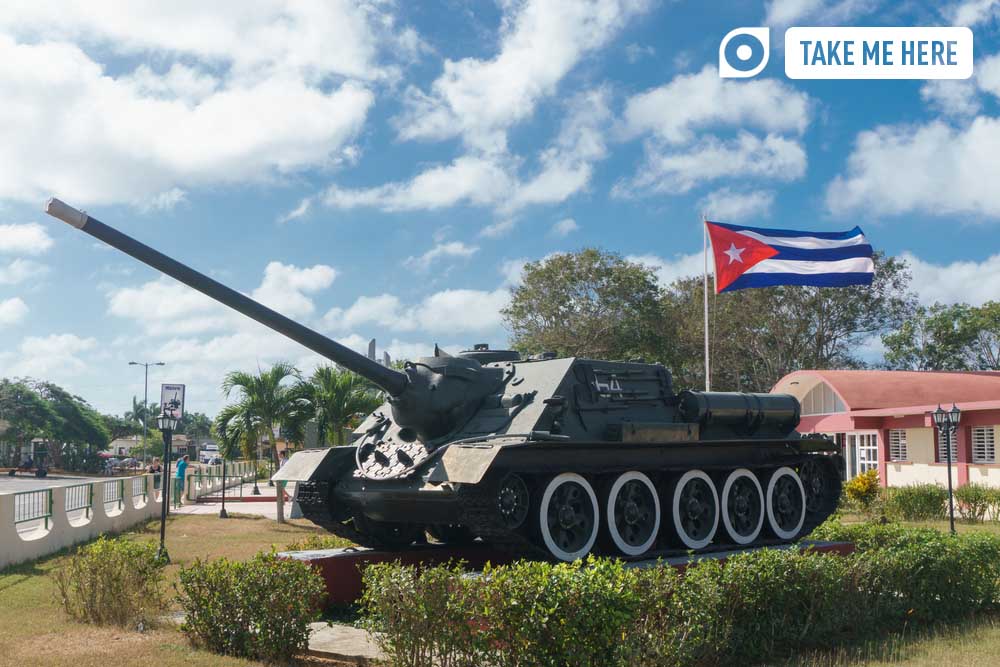 10. Dance with the locals at the Callejón de Hamel, Havana

For an insight into Afro-Cuban religions and to experience the powerful, percussive music and dance that accompanies their ceremonies, visit the Callejón de Hamel in the district of Cayo Hueso – a tiny backstreet off San Lázari and Lucena in northwestern Centro Habana. The area has been dedicated to Palo Monte and Santería, with shrines to various orishas and tiny stores selling art and artifacts. The walls and houses have been plastered with enormous, boldly colored murals, pieces of sculpture, old typewriters and bathtubs turned into seats. The project was initiated in 1990 by artist Salvador González.

It’s interesting to see at any time, but Sunday is the best day to go, when an Afro-Cuban band strikes up with batá drums and spirited dancing for the mixed crowd of visitors and locals. 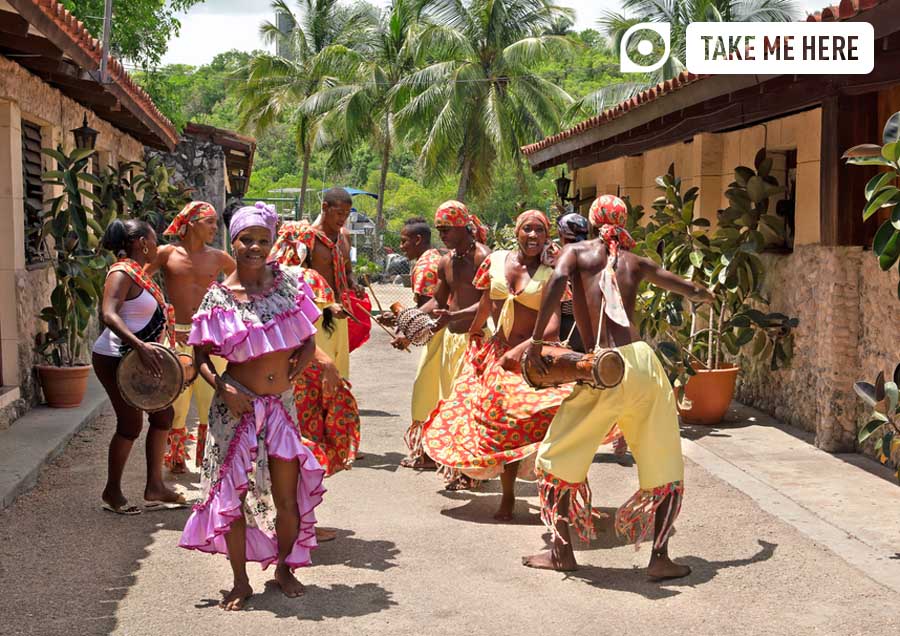 Ready to take a trip to Cuba?

Insight Guides can help you to plan and book fantastic trips in Cuba. Simply contact us to let us know your ideas for the trip and when you would like to travel. Local experts will then plan a personalized itinerary especially which you can amend until you are happy with every detail before booking. Browse our pre-planned Cuba itineraries for inspiration and keep in mind that they can all be tailored to meet your requirements.

Our time in Cuba was a wonderful experience.