9 Easter traditions from around the world

Looking for alternative Easter celebrations? From braiding willow branches to flying kites on the beaches of Bermuda, here's how to make your Easter weekend a little different this year 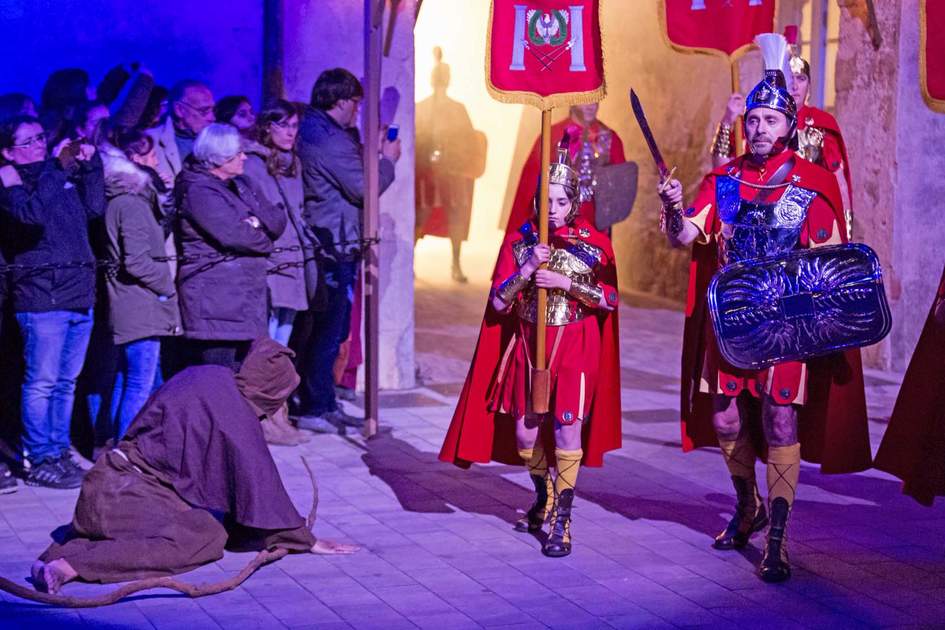 People of Verges, Spain celebrate the procession and an ancient and unique dance of death on Easter Thursday in the evening. Photo: Shutterstock
PrevNext

Easter Monday is the one day of the year when children are invited to play on the lawn at the White House. Coloured, hard-boiled eggs are pushed along the grass with wooden serving spoons in the official Easter Egg Roll. This tradition was started by first lady Dolly Madison, in the early 1800s, when she invited children to roll eggs down the slopes of Capitol Hill. After complaints about damage to the lawn were made, the event was moved to the White House in 1878. The rolling of the egg symbolises rolling the stone away from Jesus’ tomb. Afternoon festivities at the White House also include a visit from the Easter Bunny and storytelling. Adults are also welcome, if they are accompanied by a child.

2. Dress as a spook, Sweden

Festivities for Easter in Sweden are much like Halloween. Children dress as witches on Maundy Thursday or Easter Saturday, knocking on neighbours' doors offering drawings, paintings or cards in exchange for sweets. This comes from an old belief that witches would gather in the mountains on the Thursday before Easter to meet with Satan. As they flew back over the country fires were lit to scare them away. Today bonfires and fireworks are still lit in the lead-up to Easter Sunday. In typical Swedish fashion, feasts are held on Easter Sunday consisting of salmon, herring, new potatoes, eggs, ham and cheese, followed by the giving and receiving of Easter eggs. Swedish Easter eggs consist of a painted paper shell filled with chocolate and sweets.

3. Feast on a giant omelette, France

Every year in the small village of Haux in France a giant omelette is prepared in the main square on Easter Monday. Roughly 4,500 eggs are used to feed around 1,000 people. The tradition dates back to Napoleon’s time when his army was travelling through the south of France. Stopping for lunch, he was served an omelette. Napoleon allegedly enjoyed it so much he ordered the villagers to gather their eggs and make a giant omelette for his army the following day.

Elsewhere in France church bells stop ringing for the three days of Easter having chimed every other day of the year. The tradition started when church bells were taken to Rome to receive a blessing, returning on Easter Sunday where they toured the country with people leaving Easter eggs, chickens and rabbits in every back garden. Children go out after midday on Easter Sunday to hunt for the eggs that have been left in their gardens. 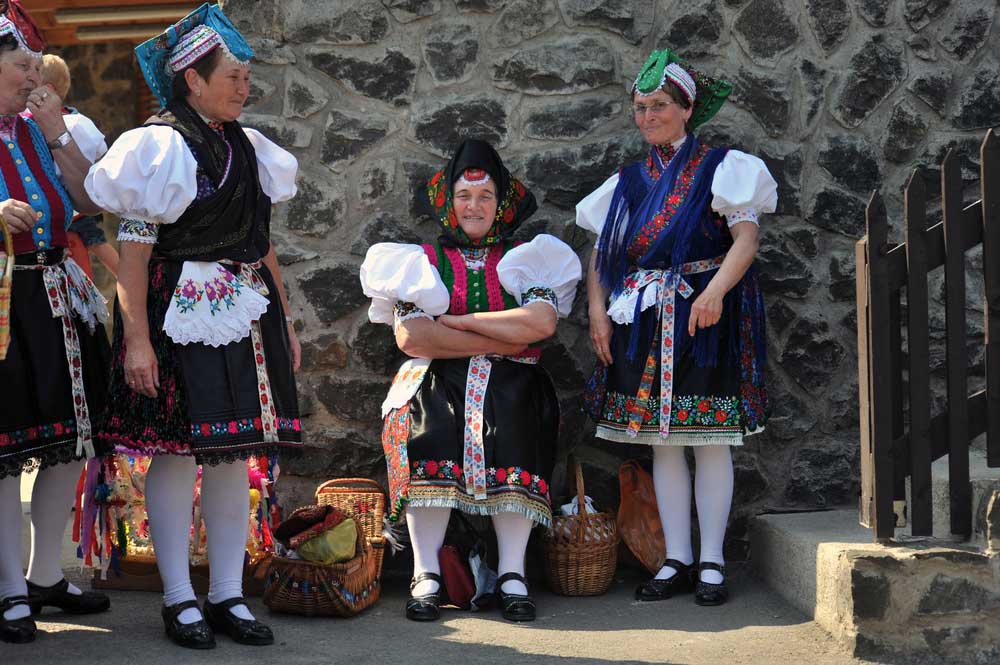 Men gather young, live willow branches and braid them, adding ribbons once they are complete. They use the pomlazka (braided whip) to spank women in a playful way on Easter Monday. Legend says that the buds on a willow tree are the first to break, symbolising vitality and fertility. Spanking women with the branches is said to pass these two traits onto the women bringing them health and youth. Farmer's wives used to make braided whips to spank anyone living in the house and the livestock. Nowadays most men buy a pomlazka as the art of braiding them is diminishing, others will just use wooden spoons.

Two white oxen pull a cart through the streets of Florence on Easter Sunday, from Via Il Prato, arriving in Piazza del Duomo at 10 o'clock in the morning. The cart is nine metres tall, decorated and rigged with fireworks. During the morning church service at 11 o'clock, the Archbishop lights a Colombina (a dove-shaped rocket), which represents the holy spirit. It travels along a wire to the cart standing outside in the square, igniting the fireworks and creating the Scoppio del Carro (explosion of the cart). There will be a good harvest and a good year for the people of Florence if the ritual proceeds smoothly and all the fireworks explode. This is a tradition that dates back more than 300 years.

6. Fly a kite on the beach, Bermuda

On Good Friday the people of Bermuda gather at Horseshoe Bay for KiteFest. Kites are made in bright colours with geometric patterns and taken to the beach to be flown. This began about 40-years ago when a British army teacher used the flying of a cross-shaped kite to explain Christ's ascension to his Sunday school class. The festival also hosts games such as egg and spoon and wheelbarrow races. Children can also hunt for Easter eggs, which have been hidden around the bay. Hot cross buns and cod fishcakes are traditional foods to be eaten over Easter, often together with the hot cross bun sandwiching the cod fishcake. These are eaten before sunrise services on Easter Sunday, which are held by the water on beaches and more traditionally at churches. 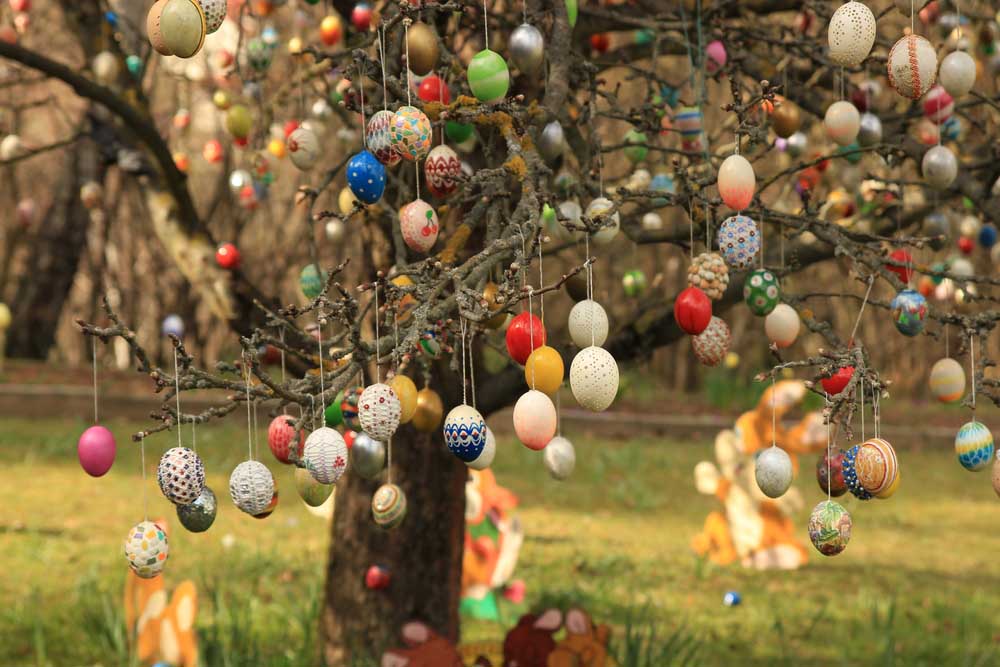 Easter eggs on the tree in Germany. Photo: Shutterstock

Following the morning church service on Easter Saturday, the Patron Saint, St Spyridon, is carried through the streets followed by bishops, priests, choirs and bands. After this, the people of Corfu head home and at 11 o'clock on the dot start throwing earthenware pots from balconies and windows, smashing them on the streets. There are many theories for this tradition, one is that throwing old pots welcomes spring and the gathering of fresh crops in new pots. Another is that throwing old pots cleans the house in preparation for the resurrection. After the spring clean, people gather in the main square throughout the evening holding unlit candles. The bishop stands at the front of the crowd and announces ‘Christ has risen’ at midnight, which starts a wave of candles being lit, each person lighting their candle from their neighbour's.

Germans display their Easter eggs on trees, sometimes in their thousands. Four weeks before Easter weekend people in Germany start to prepare. They blow eggs, removing the contents but leaving the shell full, to paint. Some are painted plain and some in decorative patterns. Once they are decorated, strings are attached to the individual eggs and they are hung from trees and small bushes inside or outside the house. The Easter Bunny delivers eggs on Easter Sunday, leaving them underneath the trees for children to find. Easter Sunday and Monday also brings bonfires in a pre-Christian tradition, symbolising spring’s triumph over winter and giving fertility to the new crop; the ash left from the fire would have been used as a fertiliser, with workers sprinkling it over fields.

9. Explore the darker side of the celebrations in Verges, Spain

Maundy Thursday in Verges shows a darker side of Easter with the ‘Dansa de la Mort’ or Death Dance. People dress in skeleton costumes, carrying scythes, clocks, axes and burning torches. Gathering in the streets at 5 o'clock in the evening they re-enact scenes from the Passion and dance the Death Dance to the sound of beating drums. At midnight there is a parade of dressed up people, which ends with a few individuals carrying boxes of ashes. The ritual originated and was practised in Europe during the medieval times (5th-15th centuries) reminding people that earthly pleasures would soon come to an end. It also represents the final judgment after death when it is decided if individual souls go to heaven, hell, or stay in purgatory. Verges is one of the only medieval towns in Spain that has held on to this tradition.

Travel the world with Insight Guides:

Remember, our local experts are based in destinations around the world so if the traditions above don't take your fancy, get in touch today. We'll match you with a local expert in your chosen destination who can plan, organise and book your entire holiday for you. Alternatively, explore more of our suggested itineraries online now.