Visiting the line: the best locations along the equator

There is something appealing about a straight line – doubly appealing when the line in question divides the Earth into the northern and southern hemispheres. Here is our guide to the best destinations to visit along the longest straight line on the planet: the equator. 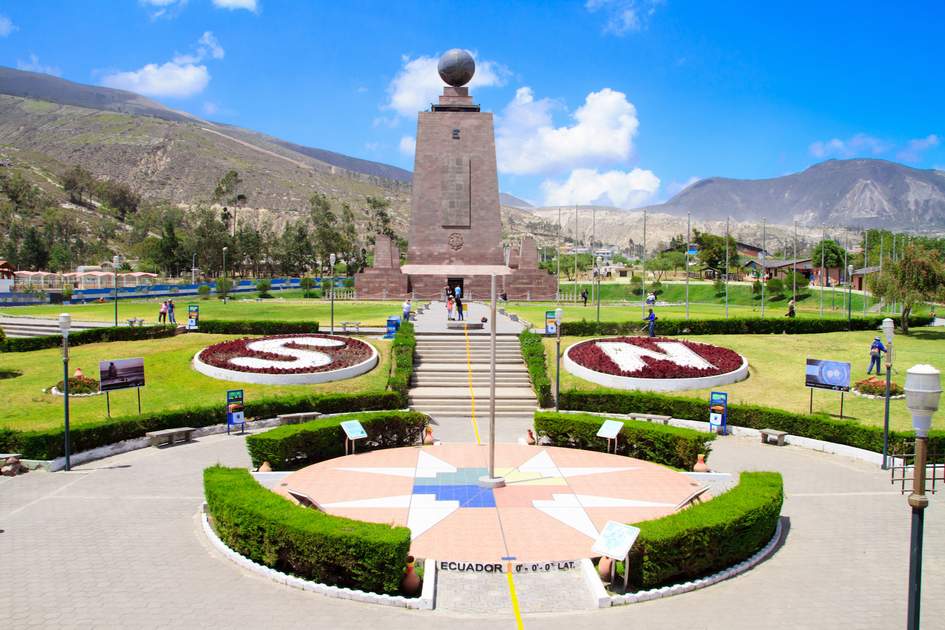 Steeped in seafaring mythology, scientific intrigue, and cartographic significance, the equator is a notional line where daylight hours don't really change, where there is little distinction between the seasons, and where temperatures remain fairly high. This constant high heat forms a regular and violently spectacular thunderstorm belt around the globe. Nearly all of the equator falls over oceans, which when heated can become the source of typhoons and hurricanes. Most disperse over the oceans, but if they reach land they can be ferocious.

Our planet is not the perfect sphere that our familiarity with globes may lead us to believe – it bulges somewhat around the middle, like an overripe orange, and it is around this bulge that the equator lies. This is why the equator can lay claim to being the longest unbroken straight line on the planet – 40,000 km (25,000 miles) long. This equatorial bulge results in a strange fact. The point furthest from the Earth’s core isn’t the peak of Mt Everest but the significantly lower Volcán Chimborazo just off the equator in Ecuador, standing at a slight 6,268 metres high and languishing in 16th place on the list of the the world's highest peaks. 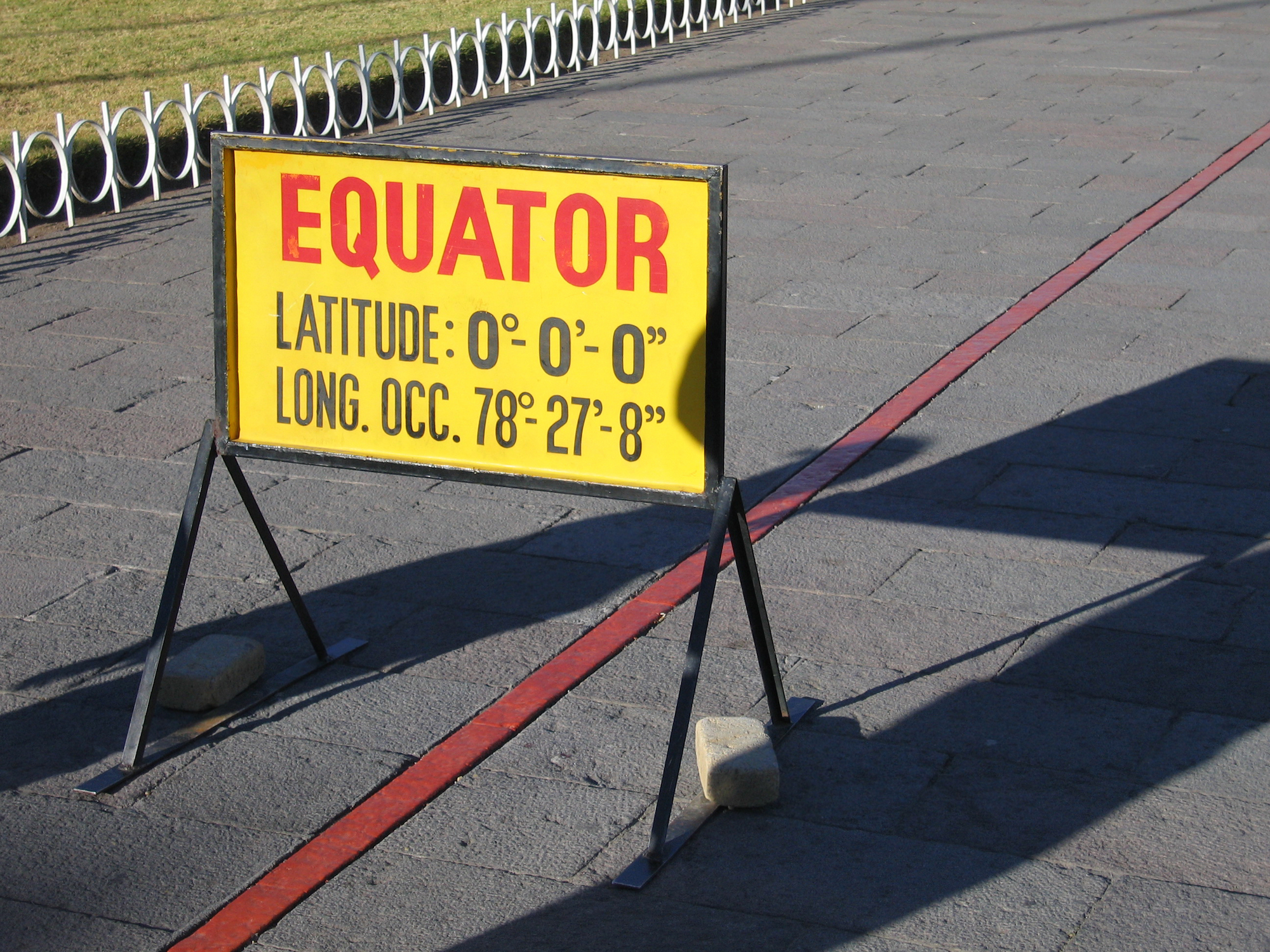 Straddling the line: the equator is marked by a sign. Photo: Jennifer Stone/Shutterstock

Most maps of the planet are centered upon the equatorial line. Varying map projections battle valiantly against this norm, but it looks correct to see the middle of planet presented on the middle of your map. Looking at maps of the world, the vast amount of water the line traverses is clear, so much in fact that only around 20 percent of the equator actually crosses land.

The countries straddling the hemispheres are: Brazil, Colombia, Republic of Congo, Democratic Republic of Congo, Ecuador, Gabon, Indonesia, Kenya, Kiribati, Maldives, Sao Tome, Somalia and Uganda. Unfortunately, these are currently not all thriving destinations – conflict and poverty do tend to hug the line. However, there are obvious exceptions and plenty of places where travellers can easily and safely experience teetering on ‘the line’.

Ecuador takes its role at the centre of the world very seriously. There are a raft of monuments across the country but it's the monument, La Mitad del Mundo (Middle of the World), which is the real centre of the equator industry. Situated around 20km north of the capital, Quito, this imposing square column with a globe perched on top houses a small planetarium and scientifc displays. It makes for a fun visit, while the nearby Intiñan Solar Museum showcases more equator-centric exhibits.

One of the more interesting places to cross the line is on the slopes of Chimborazo, the third tallest point in the country at 5,790 metres. The equator passes across this extinct volcano resulting in its claim to fame as being the world's highest point on the equatorial line.

The Brazilian city of Macapá, at the Amazon’s northern mouth, stands firmly upon the equator and you can straddle the marker line or marco zero. The city also has a modest multipurpose stadium, known as the Zerão, in which one half of the pitch lies in the northern hemisphere, while the other is the southern hemisphere, the halfway line being the equator.

Kenya is home to two small towns lying on the equator: Nanyuki and Siriba. Neither have a real monument, but there are signs to let you know when you are crossing. The country's Meru National Park also straddles the equator: here you can also seek out lions, elephants, cheetahs and leopards.

Indonesia's thousands of islands are scattered across the equator, although there are only a few small statues and monuments to hunt down. The most impressive of these sits a few kilometres north of Pontianak, on Kalimantan, the Indonesian area of the island of Borneo. Tugu Khatulistiwa is a dome-shaped building covering a 1930s monument and housing a simple museum, with a spire at its centre reaching up into the sky. 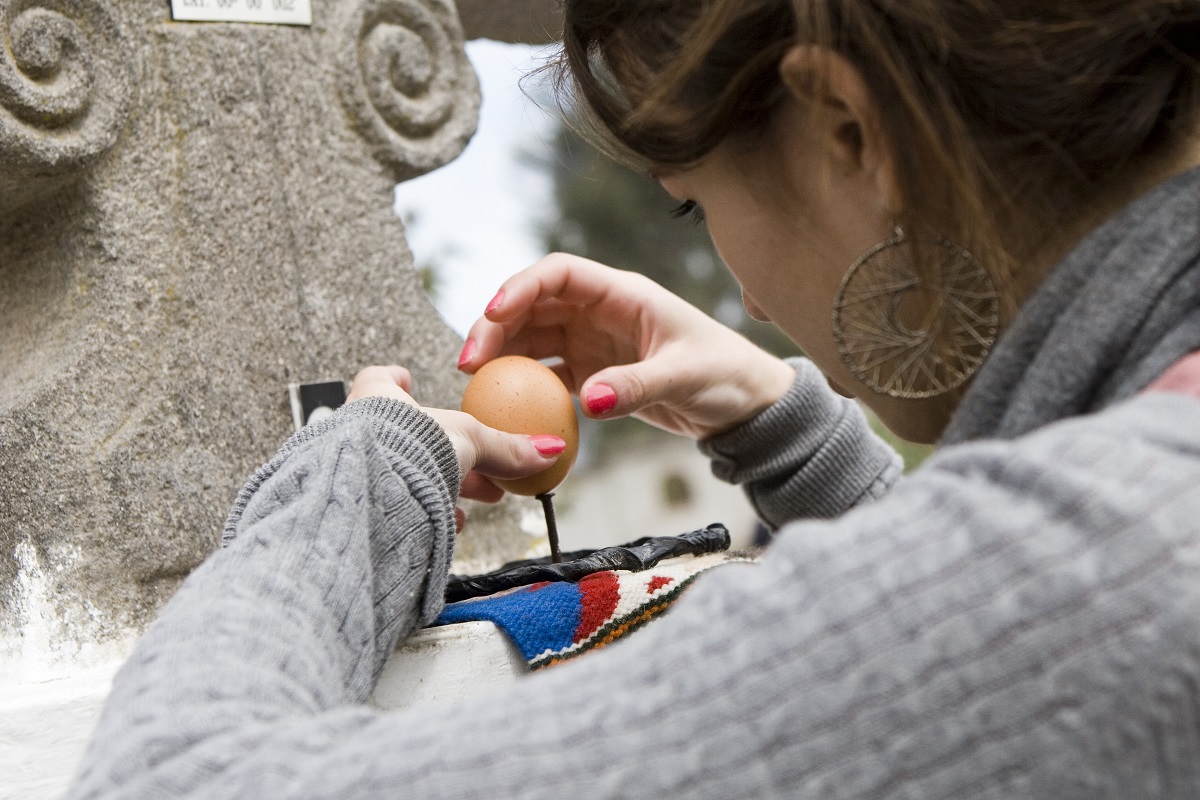 Balancing an egg on a nail at the Intiñan Museum, Ecuador. Photo: Corrie Wingate/APA

When to visit the equator?

Perhaps the best (and busiest) time to visit any of the destinations on the equator is during the March and September equinoxes, when the sun, directly overhead, works its magic trick of casting no shadows. Things do change when you cross the line, the most obvious being the view of the stars. Those heading south for the first time should look to the heavens for a view of the Southern Cross, an icon of the southern skies, it’s easy to spot the constellation as its four main stars shine brightly in the night sky.

Ready to take a trip to the equator?

Insight Guides can help you to plan and book wonderful trips to destinations on the equator. Simply contact us us with details of when you would like to go and your ideas for your trip. Our local experts will then plan a personalised itinerary for you which you can amend until you're totally happy with every detail before booking. Browse our existing itineraries in Brazil, Colombia, Ecuador, Indonesia or the Maldives for inspiration and keep in mind that all of our planned itineraries can be tailored to meet your specific needs.