Portuguese cuisine: Lisbon and beyond

Fresh fish, succulent pork and hearty soups laced with garlic – dining in Portugal is to taste the presence of other countries. Classic Portuguese dishes conjure up images of Brazil, Angola, Mozambique and Macau. Here is our guide to Portuguese cuisine in Lisbon and beyond. 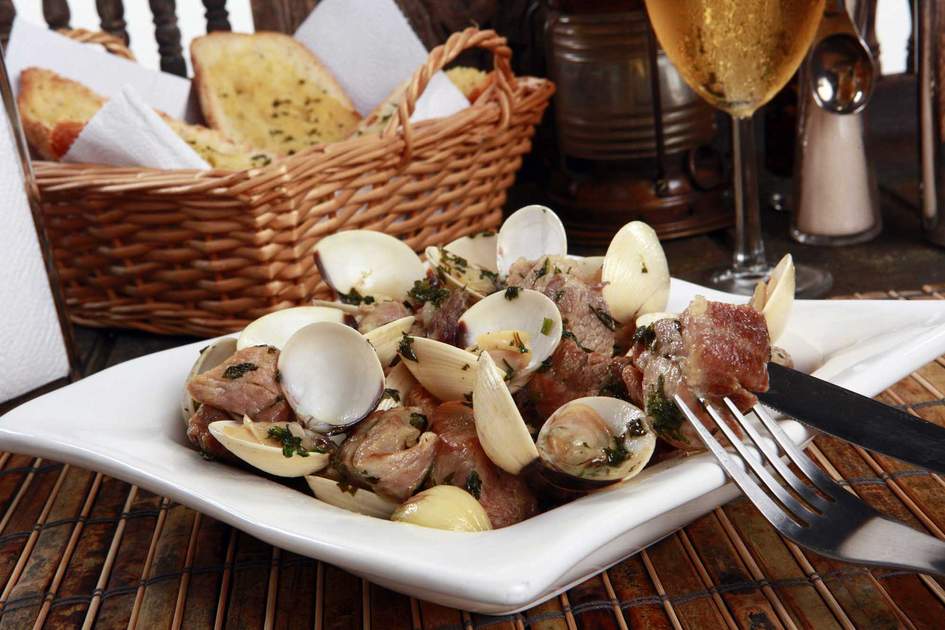 During Portugal’s lavish Age of Empire, its navigators began bringing foods from the Old World to the new. Sugar cane and pineapples were cultivated in Brazil and brought over to Portugal. These are now used in signature dishes in fashionable Lisbon restaurants. Brazilian chili peppers took root in Angola, another important Portuguese colony, and became so essential to cooks there that today they are known by their African name, piri-piri. Since Angola ceased to be a Portuguese colony in the mid-1970s, the subsequent influx to Lisbon of thousands of Angolan immigrants has meant that piri-piri sauce is as popular a condiment Portuguese cuisine as salt and pepper. Other exchanges were African coffee, Brazilian cashews and oriental tea plants.

Premium quality potatoes and tomatoes are proudly cultivated in Portugal. The phrase found on French menus, 'à la Portugaise', refers to a dish that is richly sauced with tomatoes. Onions, garlic and wheat, indispensable to any self-respecting Portuguese cook, were probably introduced by the Romans who were aiming to make the Iberian peninsula the granary of Rome. It was the Arabs who dug irrigation ditches, who first planted rice and who also covered the Algarve slopes with almond trees. The Algarve’s almonds were ground into paste, sweetened, and shaped into delicate miniature fruits, birds and flowers displaying intricate detail. They are still produced today and you can try them at Pastelaria Gardy (R. de Santo Antonio 16) in Faro.

The Moors also introduced figs and apricots to the Algarve, together with the trick of drying them in the sun. They planted groves of lemons and oranges and, as was their custom, they combined fruit with fish and with meat. Many supposedly vegetable dishes include meat fat or stock – even a salad is considered incomplete without a sprinkling of tuna. Vegetarians may prefer self-catering, shopping at markets for fruit, vegetables and bread. 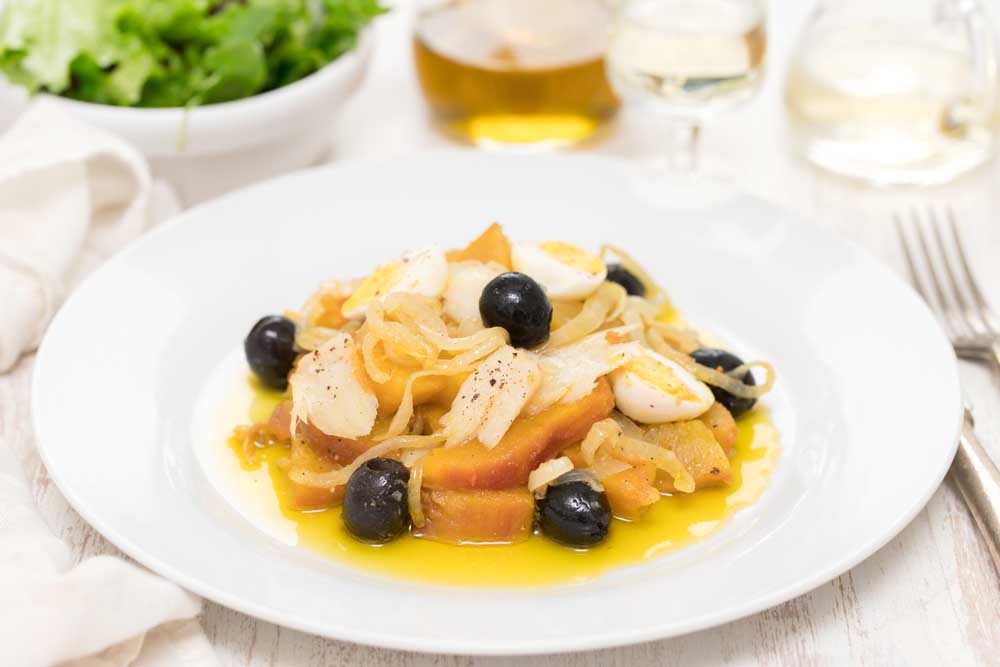 Dried salt cod, or bacalhau, is a Portuguese creation dating from 1936 when local fishermen where fishing Newfoundland’s Grand Banks for cod. It was in the 16th century that Portuguese fishermen learned to salt cod at sea to make it last the long voyage home, and to sun-dry it into board-stiff slabs that could be kept for months then soaked in water before cooking. Nearly as popular as salt cod are sardines netted off the Atlantic coast. They are considered the sweetest and fattest in the world, and locals grill them right on the streets, using little terra-cotta braziers.

Some of the best salt cod dishes to try are bacalhau à Gomes de sá (casserole with cod, sliced potatoes, onions, hard-boiled eggs, and black olives), bacalhau à brás (cod, with scrambled eggs, onions, and shoestring potatoes) and bacalhau à Conde de Guarda (salt cod creamed with mashed potatoes). A Cevicheria (R. Dom Pedro V 129) in Lisbon produces some of the city’s most exciting fish dishes. This tiny restaurant does not take reservations, so be prepared to have to wait before being seated.

To try some of the best Portuguese cuisine without the bells and whistles, try Time Out Mercado da Ribeira in Lisbon. This indoor market allows you to sample different styles of cooking in a lively, informal setting. 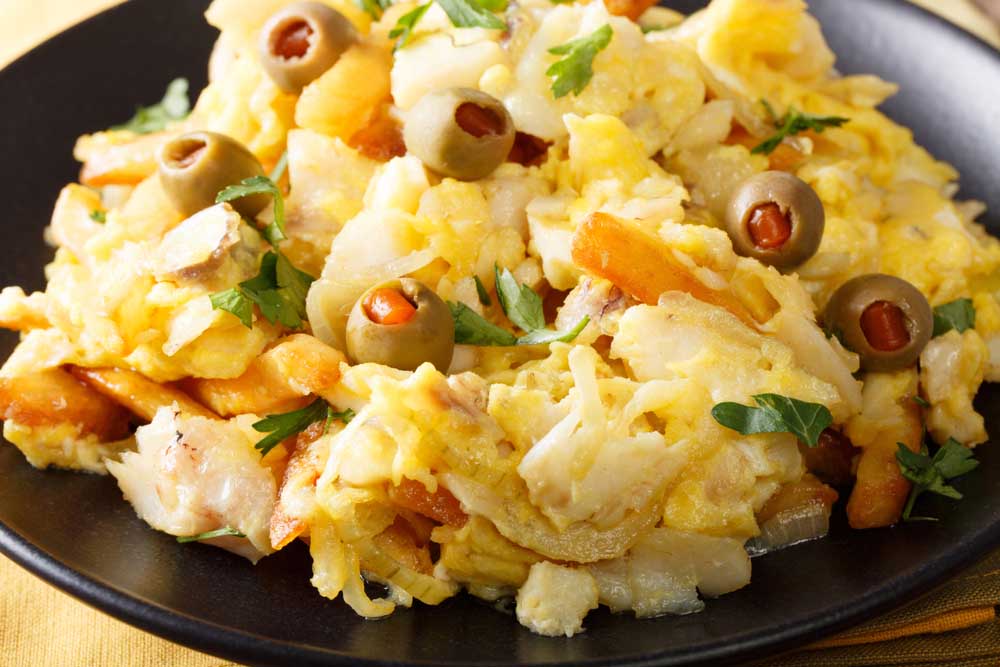 If salt cod and sardines share top billing as the favorite fish, pork reigns supreme as the king of meats. The country’s most famous pork dish is porco à alentejana, for which cubes of pork are marinated in a paste of sweet red peppers and garlic, browned in fruity local olive oil, then covered and braised with baby clams, still in their shells. The clams open slowly under the gentle heat, spilling their briny juices into the ambrosial red mixture. This dish is served in many restaurants around the country but try Casa do Alentejo (R. das Portas de Santo Antão 58) in Lisbon for an authentic dining experience in a converted mansion with Arabian-style decor.

The Portuguese national dish is built neither upon salt cod nor pork. Its key ingredient is cabbage, specifically a richly emerald, tender-leafed variety. The dish itself is called caldo verde, a bracing, jade-green soup brimming with potatoes, onions, garlic and thinly shredded green cabbage. Try De Castro (Praça das Flores 46) in Lisbon for soup and other well-made classics.

Next to caldo verde, Portugal’s most famous soup is probably açorda à alentejana, a coriander-strewn, bread-thickened, egg-drop soup seasoned with copious amounts of garlic. The soups and stews of Portugal – whether they are made of chickpeas and spinach, tomatoes and eggs, pumpkins and onions, or dried white beans and sausages are filling, nourishing and soul-satisfying. To make a meal, all they need for accompaniment are a glass of wine, a chunk of cheese and a crust of bread. Portugal’s simple country breads are baked in stone ovens to give them a faint smoky flavor. To experience traditional Portuguese cuisine in a converted monastery, head to Lisbon's Cervejaria da Trindade. 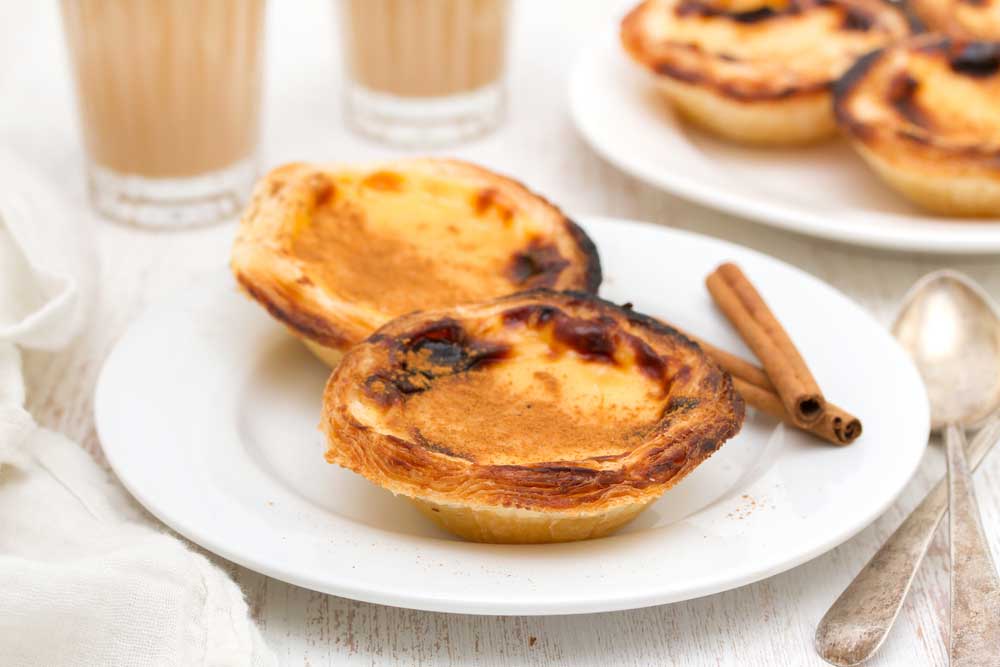 The Moors are thought to have introduced egg sweets and tarts to Portugal during their 500-year occupation. Dozens of different egg sweets are made with a prodigious use of egg yolk and sugar. Many are flavored with cinnamon, others with lemon or orange or almonds, and each is shaped in its own traditional way. The most notable Portuguese sweet treats are undoubtedly the pasteis de natas. The light-as-air custard tarts on sale at Lisbon's Pastéis de Belém were first created nearby by nuns at the Mosteiro dos Jeronimous, who used the egg whites to starch their habits and so began making the tarts to use up the excess yolks. Constant queues outside of this Lisbon bakery today are a testament to their continuing popularity.

Insight Guides can help organize and book fantastic tailor-made trips in Portugal for you. Simply contact us to let us know your ideas for the trip and when you would like to travel. Local travel experts will then create a personalized itinerary especially, which you can amend until you are completely happy with every detail before booking. Browse our Portugal itineraries for more inspiration and keep in mind that they can all be tailored to suit your requirements.