Best towns in the Algarve

Portugal's southernmost region, the Algarve, is home to Moorish architecture, charming fishing villages and idyllic Atlantic beaches along stretches of rugged coastline. Here is our guide to the Algarve's best towns and their top sights. 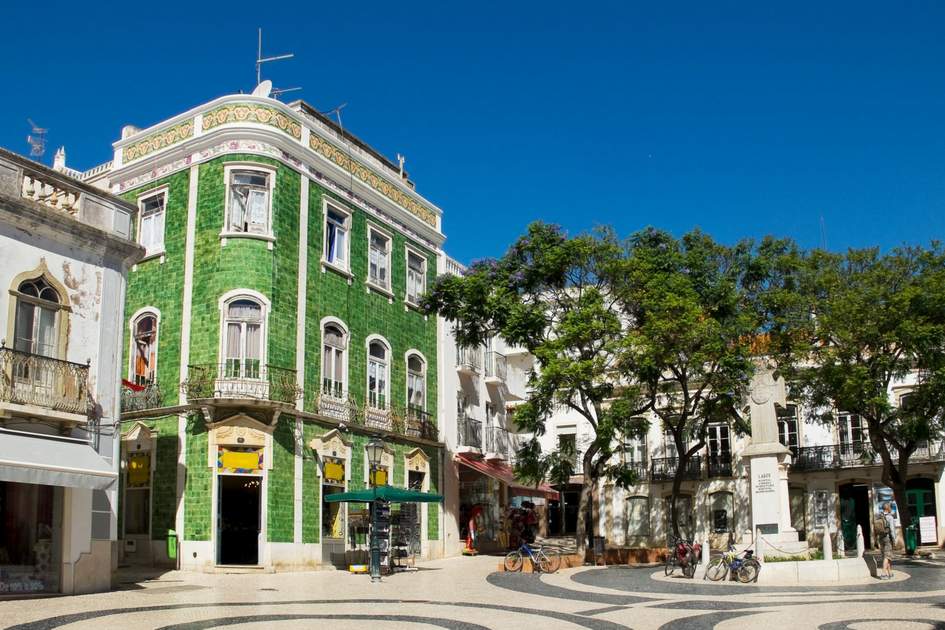 Faro, the provincial capital of the Algarve, has a greater concentration of culture and historic monuments than any other town or city in the region. Forming a grand entrance to the circular old town, the 19th-century Arco da Vila consists of a grand arch and bell tower. Beyond the arch, you will find a maze of cobbled streets, one of which leads up to the splendid expanse of the Largo da Sé (Cathedral Square), a quintessential Portuguese plaza best explored in the evening when floodlit and free of cars.

Across from the harbor is the main town. At its center is the Jardim Manuel Bivar, which was built in the 15th century as Queen’s Square. It is a popular meeting place, lined with plenty of wine bars and restaurants. Rua de Santo Antonio is the main thoroughfare of the main town. At its far end the Museu Etnográfico Regional do Algarve (Ethnographic Museum) displays artworks and artifacts, as well as selling delightful local handicrafts. 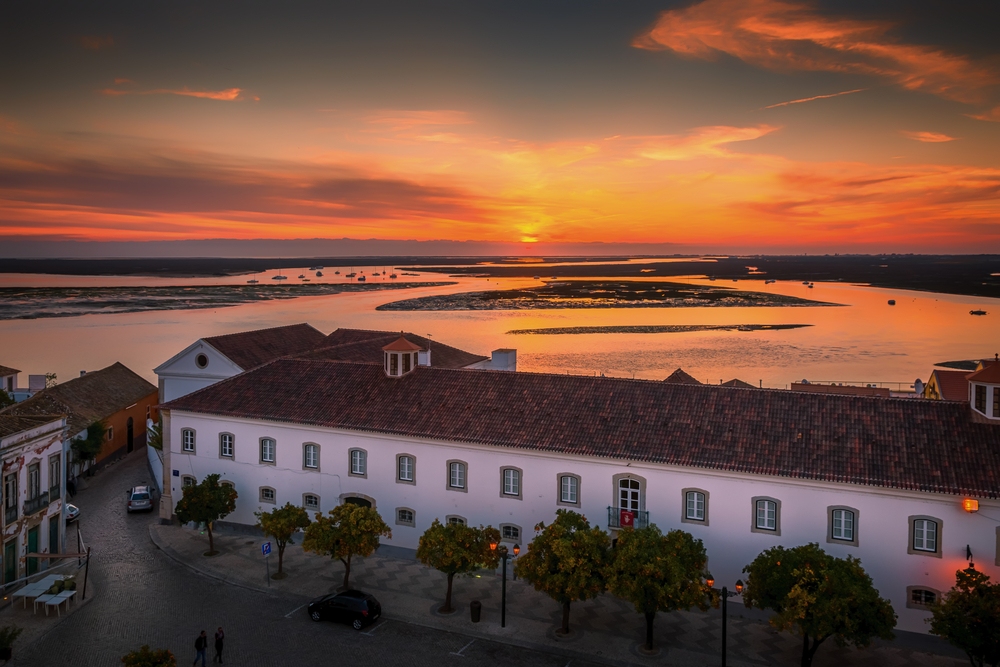 Sunset over the town of Faro, Portugal. Photo: Shutterstock

The historic fishing town of Olhão was built in the Moorish style and retains a large working fishing port. Over the years it has made few concessions to tourism and so remains full of character. On the seafront, you will find the town’s modern market halls. The Olhão fish market is one of the best in the Algarve. Arrive early to see it in full swing. Be prepared to use your elbows to reach the slithery hills of fish, whilst locals hawk fresh seafood at the tops of their voices.

Ferries run from the dock to the beautiful nearby beach at Culatra, and in the summer, to the island of Armona, a popular spot for sunbathing and swimming in the ocean. Architectural sights in the town include the Parish Church and Nossa Senhora do Rosário, which is set in the winding narrow backstreets on the way to Olhão's main square, Praça da Restauração, where locals gather to while away evenings. Climb up the bell tower to take in views over the town.

Tavira is one of the true jewels of the Algarve. One of the region’s most historic cities, its Moorish, Reconquista and Renaissance roots are clearly visible today, especially in the town's numerous churches.

The 11th-century Castelo de Tavira, located in the middle of the old quarter, was a defensive structure built by the Moors. Climb the castle walls for superb panoramic views over the city and down to Santa Maria do Castelo church, which dates from the 13th century, and in all likelihood occupies the site of the town’s old mosque.

Just down the hill from the Castelo, near the river, the beautiful 16th-century church, Igreja da Misericórdia de Tavira, is a spectacular Renaissance building with an 18th-century interior featuring lovely blue azulejo ceramic tiling and fine gilded woodwork. A walk down Rua da Liberdade – Tavira's main street – takes you past some impressive 16th-century mansions. 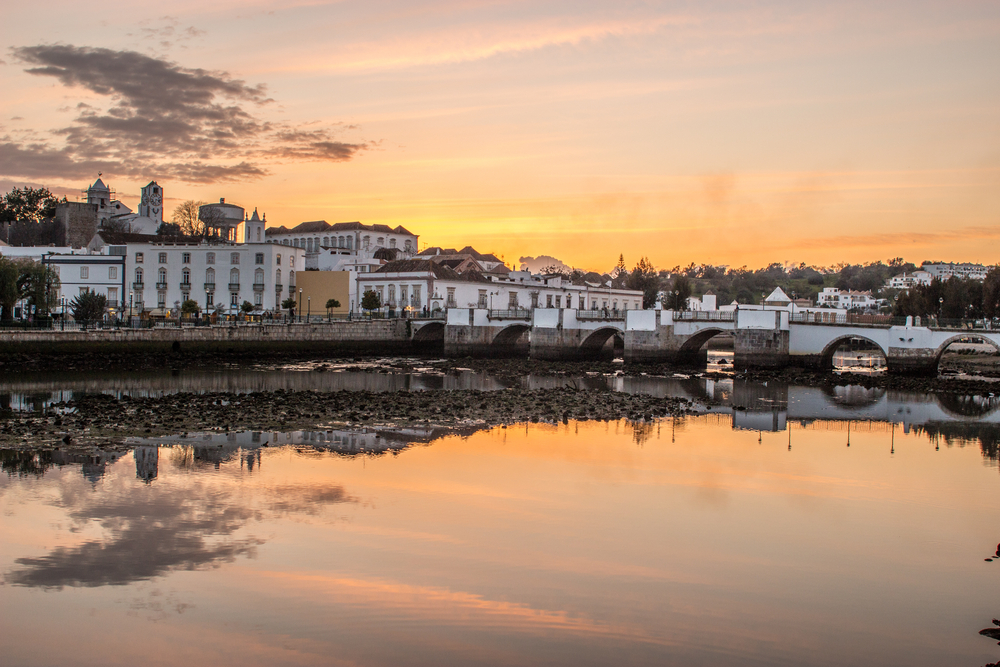 Tavira, one of the the Algarve's most attractive towns. Photo: Shutterstock

This little town is one of the Algarve's oldest and most historically significant. For five centuries its primitive castle-fortress was occupied by the Moors. After the Christian Reconquest, it became the home of the new Military Order of Christ in 1319. Opposite on the hill stands a fort dating back to 1641.

The former fortress town rises from the flat wetlands where migratory birds such as storks, cranes and flamingos and hundreds of different species of plants thrive. A conservation area of 2,000 hectares is protected as the Reserva Natural do Sapal. From here, the peaceful road along the Guadiana River stretches through golden-coloured hills that are dotted with olive and fig trees.

The principal resort in western Algarve, Lagos is a pleasant beach town. By night Lagos is lively, with outdoor restaurant terraces and bars lining narrow streets attracting a chic crowd. By day, it combines a rich historical past with a busy present day. Attractive beaches and a lovely coastline are within easy reach of the town.

The walled city is divided from the port by Avenida dos Descobrimentos. The restored fortress at the end of the avenue, Forte da Ponte da Bandeira, guarded the entrance to the harbour in the 17th century. Climb the city walls for fine views of the port and out to sea. The main street on Lagos, Rua 25 de Abril, is packed with bars, restaurants and antiques and ceramic shops. 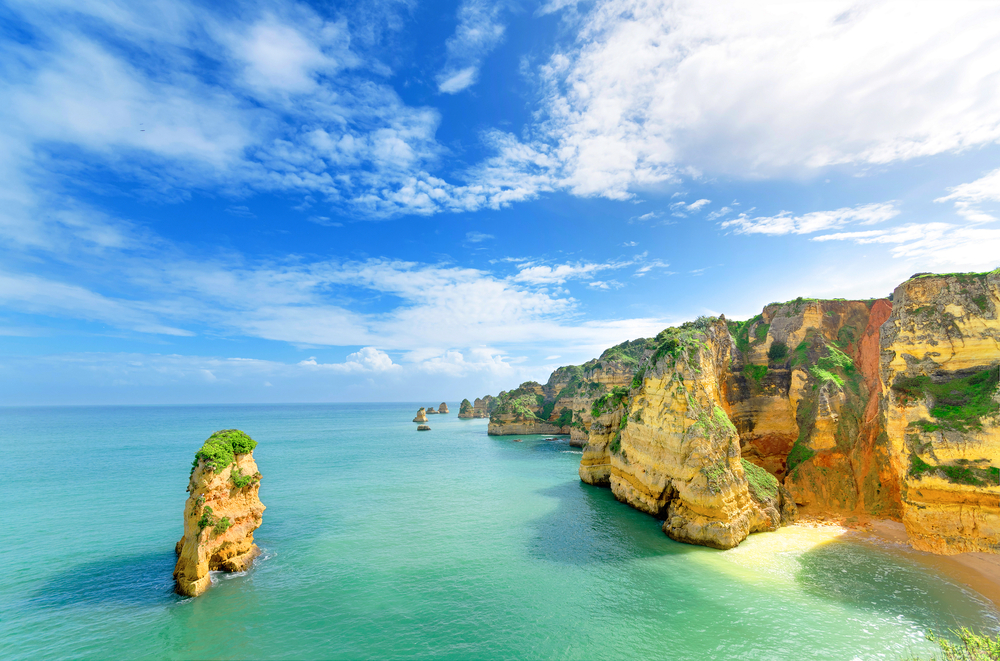 One of the most picturesque settlements in the region is the lovely, flower-laden village of Alte, a graceful settlement lying at the foot of hills and clustered around a parish church. Visitors enter the village by crossing a small, white bridge over a babbling stream that runs through the town.

The architectural highlight of the village is the 16th-century Igreja Matriz church, which contains elaborate chapels and rare 16th-century azulejo tiling from Seville. The rest of Alte is the Algarve of postcards: whitewashed houses with colorful windows and red-tiled roofs lining narrow streets.

With only a relative smattering of hotels, restaurants and tourist facilities, the coastal town of Sagres has a remote, undiscovered feel. The main attraction here is the Fortaleza de Sagres (Sagres Fortress), which was used by Henry the Navigator in the 15th century, and offers panoramic coastal views from its rocky promontory location.

The town has a working harbor where small fishing boats bob and larger vessels haul in daily catches of lobster and mackerel. A cluster of restaurants around the harbor boast impressive views, while inland, the pleasant Praça da República square is ringed by relaxed nightspots. The best beaches near Sagres include sheltered Mareta and unspoilt Tonel. 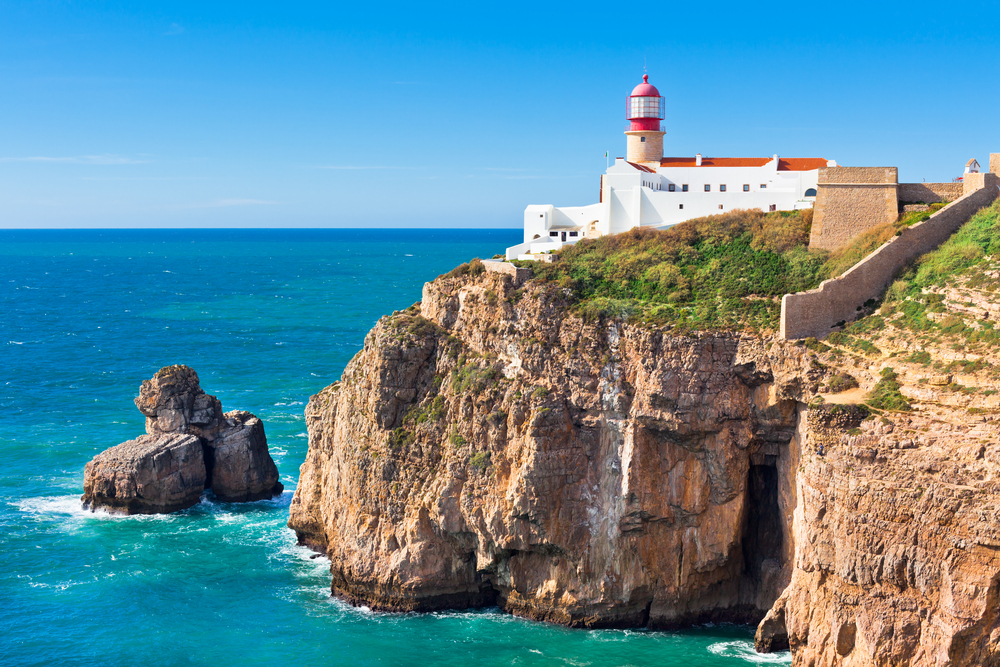 A lighthouse near the town of Sagres, Portugal. Photo: Shutterstock

Silves is the former Moorish capital of the Algarve. Eight centuries ago, the town was filled with palaces, gardens and bazaars, all of which presided over by a sprawling red sandstone, hilltop fortress. Silves Castle sits on ancient foundations but was constructed following the Christian Reconquest, though it preserves distinctly Moorish details. From its towers and battlements there are fine views over the town and surrounding countryside encompassing expansive orchards of fruit trees.

Next to the castle, the imposing Gothic Silves Cathedral, was built on the site of a mosque in the 13th century by the liberating crusaders. Nearby, the Museu Municipal de Arqueologia (Archaelogical Museum) houses an impressive collection of archaeological artifacts and exhibits, including an 18-meter-deep medieval well that visitors can climb down.

Portimão is an important fishing port renowned for its restaurants that specialize in grilled sardine dishes – many of these restaurants can be found at the dockside. Portimão is also one of the best towns on the coast for shopping. The pedestrianized town center is filled with shops, and a food market is often set up in the town square. Shopping malls and outlets around the town offer traditional crafts and locally made items.

The town was badly damaged by a 1755 earthquake and consequently there are few buildings of historical consequence. Largo 1º de Dezembro is a 19th-century park with 10 splendid blue and white azulejo benches, each illustrating a pivotal event in Portuguese history. The town's museum, Museu de Portimão, set in a former cannery on the banks of the Arade River, showcases the region's sardine fishing and canning tradition, as well as displaying some fascinating underwater archaeological finds. 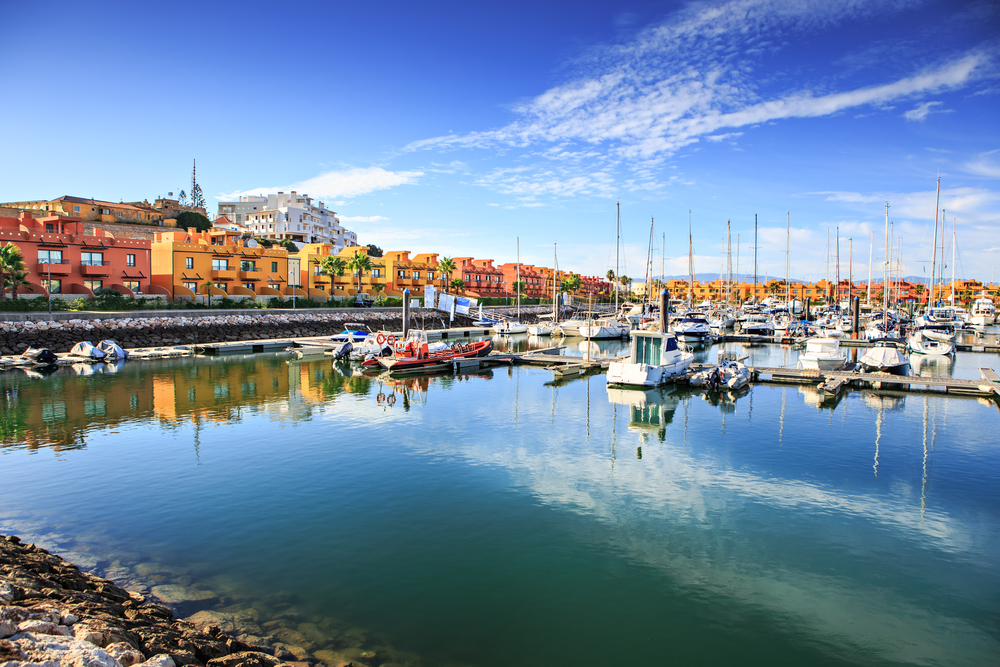 The marina at Portimão. Photo: Shutterstock

Loulé is a regional produce center with a large Saturday market, which is known for its leather, lace and copper goods, and charming outdoor cafés. There are actually two markets in Loulé: fresh produce, including fish, is sold in a mock-Moorish hall, while the 'gypsy market’ is held towards the opposite end of the boulevard. Just below the permanent market halls, on the main Praça da República square, you will find a well-preserved section of medieval castle walls. Set within the castle remains is an interesting local museum.

Also worth visiting here are the Igreja Matriz, a 13th-century Gothic church with 18th-century azulejo tiling, the Convento da Graça, with its terrific Manueline portal, and the Ermida de Nossa Senhora da Conceição, a small church prized for its Baroque altar and ceramic tiles.

Insight Guides can help you organize and book fantastic trips in Portugal for you. To get started, simply get in touch to let us know your ideas for the trip and when you would like to travel. Local travel experts will then create a personalized itinerary especially, which you can amend until you are happy with every detail before booking. Browse our existing itineraries for inspiration, and keep in mind that they can be fully tailored to suit your own specific requirements.