With hundreds of miles of Atlantic coastline encompassing rugged cliffs, sandy bays and endless golden beaches, Portugal has some of Europe’s biggest waves. The west coast and more protected Algarve offer spots for both novices and experienced surfers. Here is our guide to surfing in Portugal. 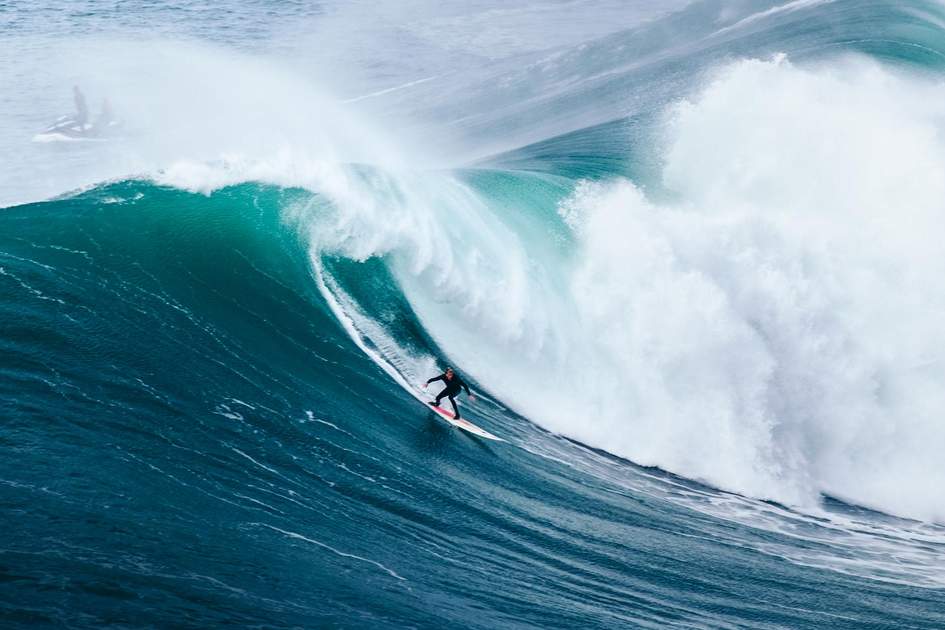 North of Lisbon, Nazaré is the main resort along the expansive ribbon of pale sands that make up the Costa de Prata (Silver Coast). In summer, thousands of bathers pack the main beach beneath rows of brightly colored canvas sunshades creating a striking scene. Further beaches stretching north beyond the headland have earned Nazaré an international reputation among surfers seeking serious waves.

Praia do Norte has an underwater gully offshore that further magnifies waves that are already huge. In the right weather conditions, the coast here can produce some of the world’s largest swells, which attract the leading names in surfing – World Surf League Big Wave events have been hosted here in previous years usually around November. The lighthouse at Sítio is the place to watch the surfers try their luck riding these monster waves, but needless to say, it is an extremely dangerous game. Inexperienced surfers should steer well clear, though Nazaré’s main beach offers more modest waves and a safer surfing experience pretty much all year round. 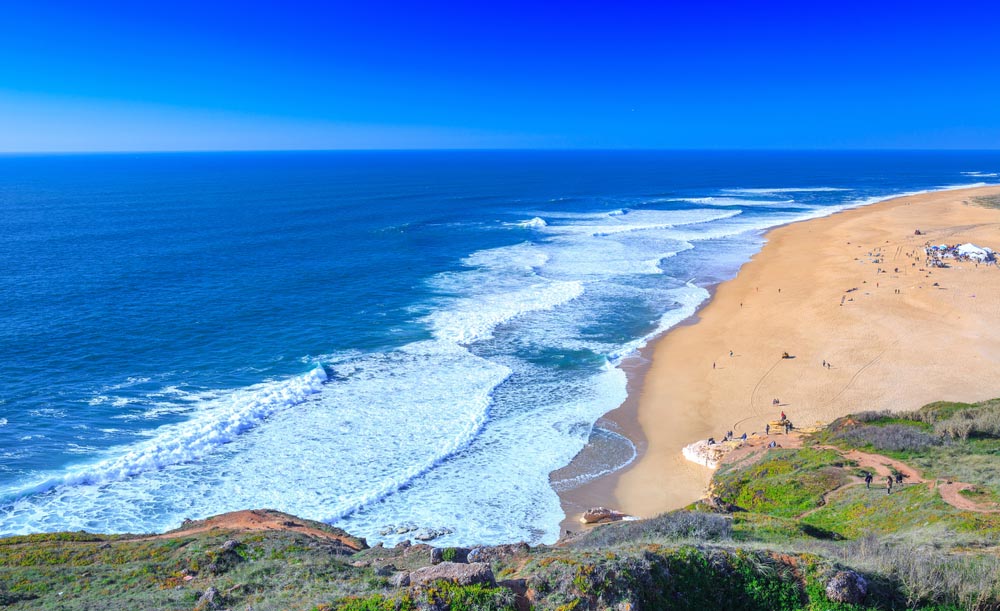 Praia do Norte, Nazaré is known for its huge waves. Photo: Slavko Sereda/Shutterstock

Around a 45-minute drive south down the coast from Nazaré, the fishing town of Peniche is home to a 16th-century fort that now houses the municipal museum. To the northeast, the islet-village of Baleal is joined to the mainland by a narrow causeway, with beaches either side of it creating perfect conditions for swimming and surfing. One side is usually more sheltered while the other catches waves that are great for surfers of all abilities making these beaches some of the best for surfing in Portugal.

Overlooked by bars and restaurants, the beaches are home to a number of surf camps, where you can rent gear, take lessons and find lodgings, including Surfing Baleal and Baleal Surfcamp. On the south side of Peniche, Supertubos is one of the original surf beaches in Portugal, with big rollers that are ideal for experienced surfers – in 2020 (14–25 Oct) the MEO Rip Curl Pro Portugal event is being held here.

Perched on a rocky ledge above a string of fine sandy beaches on the Costa de Prata, Ericeira is an attractive resort town with whitewashed houses and great seafood restaurants lining narrow lanes. It is also a popular year round destination for surfers, situated as it is in the heartland of Portuguese surfing. The coast here was named a World Surfing Reserve in 2011 due to its high density of surf breaks and long-established surfing culture. The first in Europe, the reserve actually starts 4km north of Ericeira at Praia da Empa and continues north up the coast to São Lourenço.

Surfers rate the most demanding break on this challenging stretch to be Praia dos Coxos, while the World Surfing Championships have previously been held at nearby Praia da Ribeira d’Ilhas. One of the widest beaches in the area, Foz do Lizandro, where its namesake river flows into the sea, is home to Na Onda surf school, which comes highly recommended for beginners. 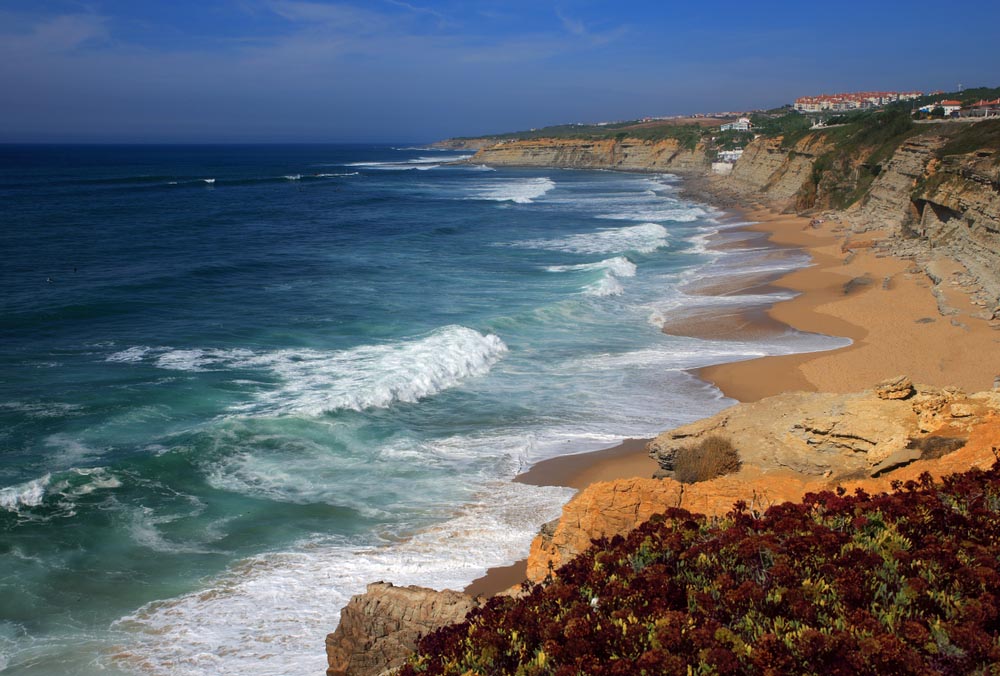 On the Algarve’s west coast, the attractive laid-back village of Odeceixe tumbles down a hillside opposite a wide river valley. Summer time sees the arrival of surfers and vacationers drawn by the charms of its superb beach, which lies west of the village in a broad sandy bay at the mouth of a verdant river valley, framed by rugged cliffs. One of the most sheltered beaches along this stretch of coast, it offers wonderful surfing on long breakers which roll in at high tide. Swimming is best at low tide, when the Odeceixe Surf School also takes advantage of the gentler waves to conduct classes for novices.

Sagres is the surfing capital of the Algarve’s west coast with a series of magnificent beaches. Its location in the far west bottom corner of Portugal helps to provide conditions for surfing that are almost always good. The swell wraps around the rocky cape of Cabo de São Vicente, creating relatively moderate waves along the stretch of coast from Sagres to Lagos, which are perfect for learners and less experienced surfers. The beaches to the north of Cabo de São Vicente face the Atlantic Ocean’s full force, resulting in swells of up to 5 metres, so are better for experienced surfers.

The fantastic broad sandy bay backed by low hills at Praia do Amado is particularly popular with those looking to ride Atlantic breakers and one of the most popular surfing beaches in the region. Those who are new to the sport are best heading to one of the local surf schools, such as Freeride or International Surf School, to take lessons, courses or to sign up for surf camps, which include accommodation and transport to beaches. 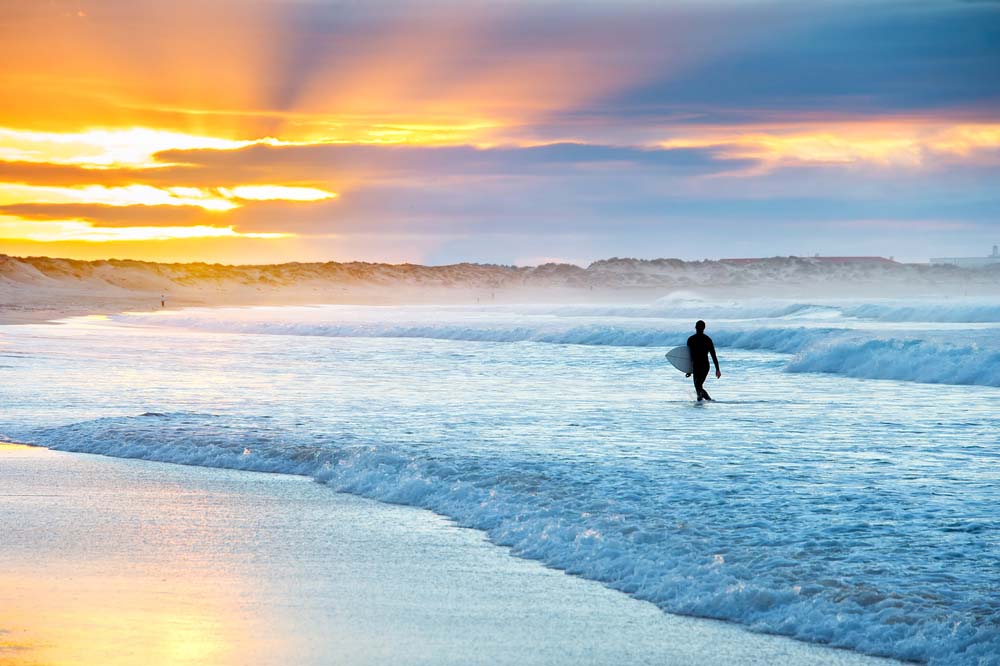 Insight Guides can help organize and book fantastic trips in Portugal for you. To get started, simply get in touch to let us know your ideas for the trip and when you would like to travel. Local travel experts will then create a personalized itinerary especially, which you can be amend until you are happy with every detail before booking. Browse our existing itineraries for inspiration, and keep in mind that all of our pre-planned itineraries can be fully tailored to suit your specific requirements.

This Spain tour company did a fantastic job to make our dream trip perfect. We gave them our travel budget, told them where we would like to go, and they did all of the planning. Our drivers and tour guides were always on time and very knowledgable. The... Read more

Every step of the planning process and the trip itself was effortless and exceptional. Our special interests, preferences and requests were accommodated resulting in a trip that exceeded our expectations.