Where to go in Sardinia

Most visitors to the Italian island of Sardinia come for its stunning bays lapped by turquoise waters. But as well as breathtaking coastline and beaches, the island offers beguiling old towns and a mountainous interior dotted with archaeological sites. Here is our look at where to go in Sardinia. 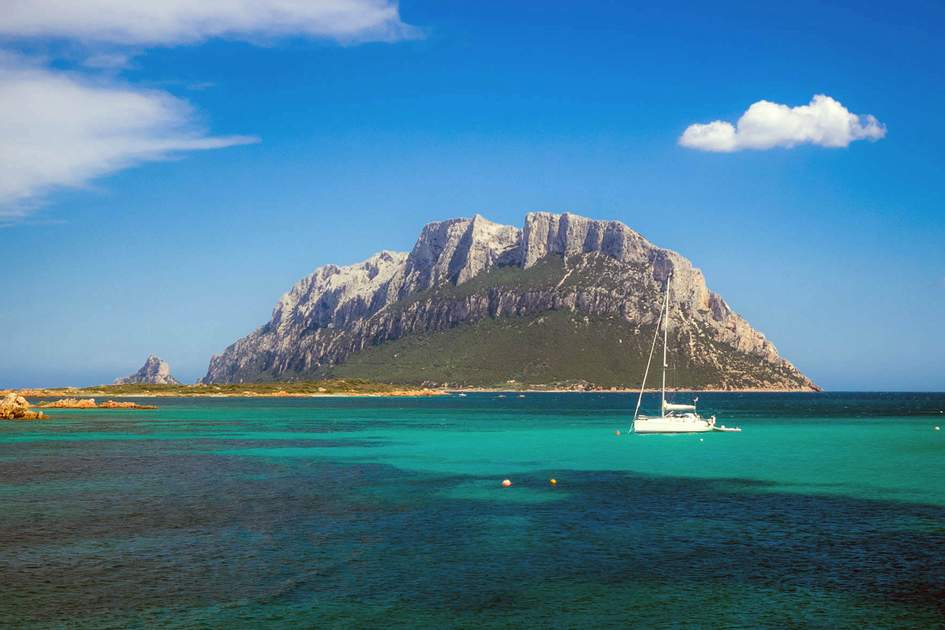 Swimming is possible at stunning beaches below the dramatic mountain peaks of Tavolara Island, off the east coast of Sardinia. Photo: Andreas Gerhardinger/Shutterstock
PrevNext

Sardinia's capital, Cagliari, has a refreshingly down-to-earth charm. Avoid the traffic-ridden port and climb up to the Castello quarter, the medieval heart and stronghold of the town. Within its 13th-century walls and towers, steep atmospheric streets lead to the cathedral and a Roman amphitheater, while the modern Cittadella dei Musei complex houses a group of museums. The highlight is the Museo Archeologico Nazi­onale Cagliari. Exhibits include prehistoric and early finds, as well as objects illustrating the island’s long history: bronze objects, Roman ceramics and artifacts dating from the Nuragic age to the Byzantine era. 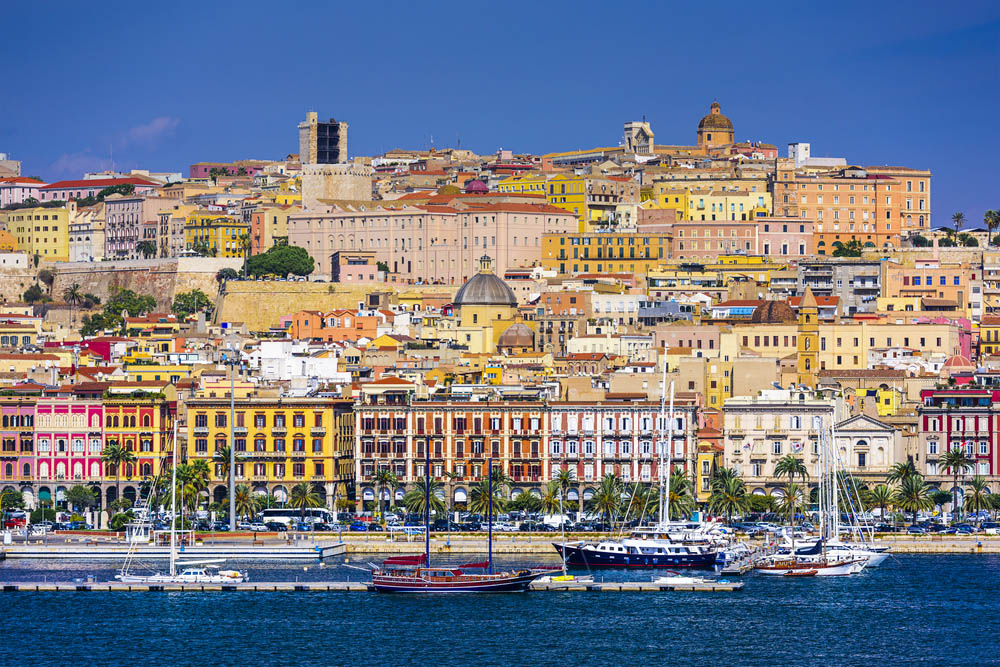 West of Cagliari, the shoreline at Chia characterizes the unspoiled, natural beauty of the south coast. Fine granite sand dunes, up to 24 meters (75ft) high, and ancient juniper trees back the coastline. The wild landscape is reminiscent of the west coast of Scotland, but on closer exploration, the flora and fauna – yellow broom instead of thorny gorse and exotic insects instead of midges – reveal their true Mediterranean character. A dip into the warm, shallow emerald and deep-blue waters off the long golden sands of Spiaggia Campana and gorgeous Spiaggia Su Giudeu reveals what a wonderful place it is to relax, swim and snorkel.

At the southernmost tip of the Sinis Peninsula on Sardinia’s west coast lie the architectural fragments and evocative remains of the Punic-Roman town of Tharros. It was founded by Phoenician merchants during the 8th century BC on the site of an earlier village. It achieved prosperity before passing to Carthage in 510 BC, when it was transformed into a naval base and Punic city. The site later passed into the hands of the Romans who originally built much of what today lies in ruins: streets, temples and monuments.

Climb the San Giovanni Tower for sweeping views over the site and coastline before exploring the beaches that run along both sides of the narrow peninsula. 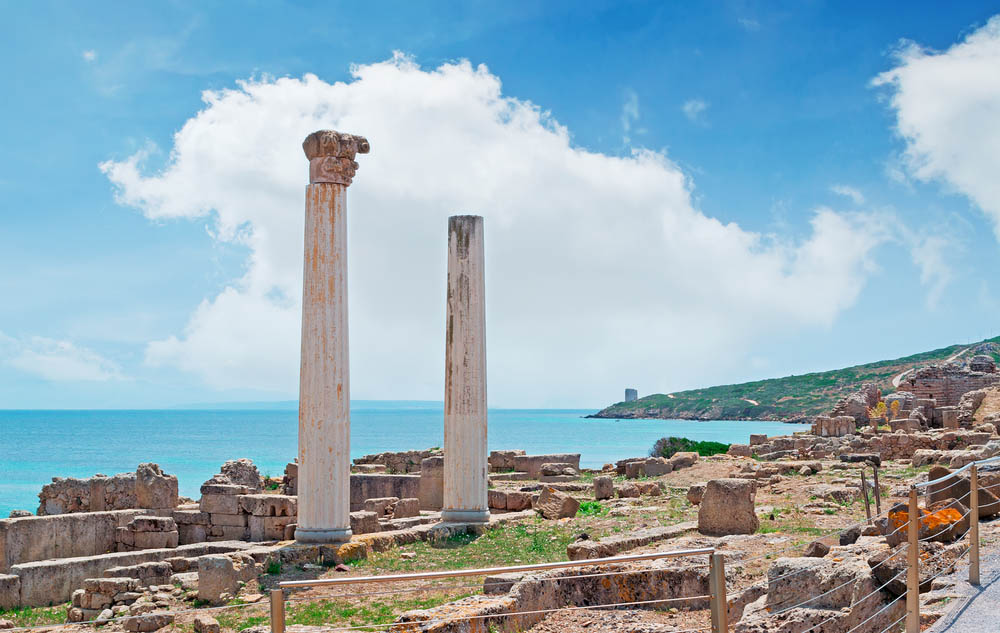 In northwestern Sardinia, the resort city of Alghero offers genuine character and history. In the 14th century, the port was occupied by Catalans, and today it has the most Spanish feel of any Sardinian town. Stroll past the imposing towers along the battlements of its walled Old Town on the seafront before exploring the labyrinth of cobbled lanes within. After admiring the Romanesque cloisters in San Franc­esco, treat yourself to coffee and cake at an old-world café on the Piazza Civica. The nearby beach of Spiaggia di Maria Pia has offers an extensive stretch of soft white sand washed by crystal clear waters. 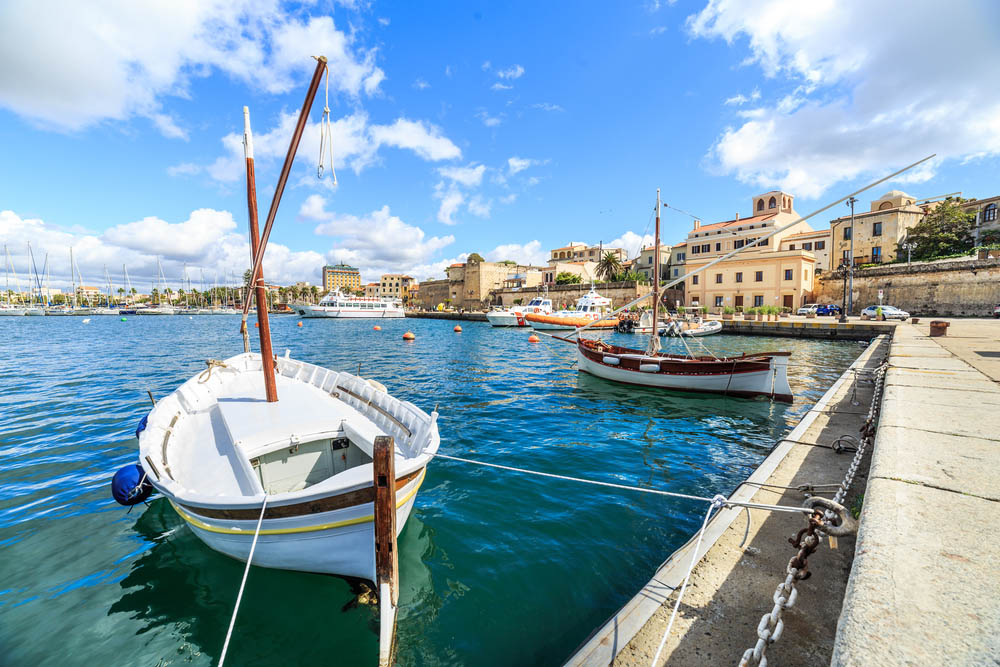 For a day trip to remember, set sail or take a motor boat from Alghero port to the promontory of Capo Caccia which houses the otherworldly Grotta di Nettuno (Neptune’s Grotto). Guided tours reveal the natural wonders of this marine cave at the bottom of hundreds of steps. Once inside the cavern system, you will pass through atmospheric chambers filled with simmering pools and multicolored rocks hewn into dramatic stalactite and stalagmite forms. 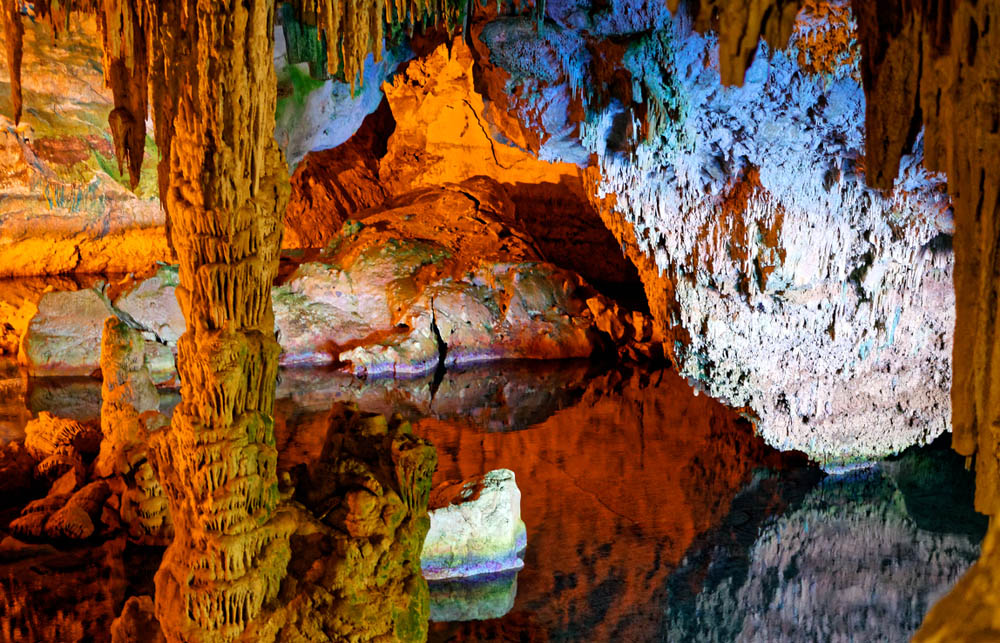 The most northwesterly point of Sardina is a triangle of land bounded by the towns of Porto Torres to the north and Alghero to the south. Just north of the tourist town of Stintino, Pelosa is one of the best beaches in Sardinia. Its sheltered stretch of pristine white sands at Capo del Falcone is lapped by transparent waters giving it a tropical feel. Arrive early if visiting in high season, as the beach is a popular summer time destination. 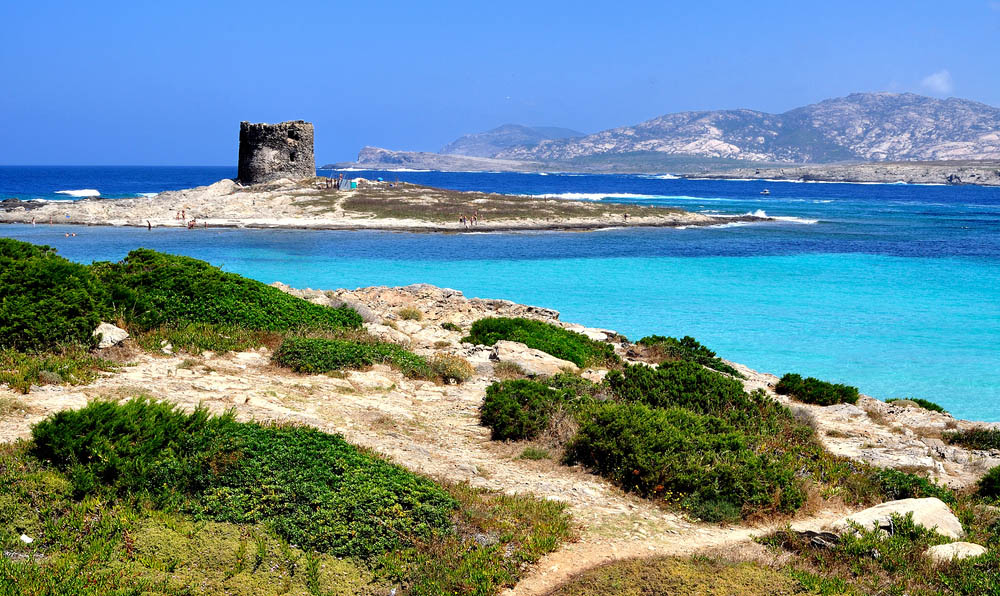 South down the coast from the ritzy resorts of the Costa Smeralda, the limestone mountain island of Tavolara lies just offshore. Though just 4km (2.5 miles) long and just 1km (0.5 mile) wide, the island’s craggy peaks tower more than 500 meters high. Hop on a ferry in Porto San Paolo, or charter a private boat, for the short ride to the curvy promontory of dunes and pebbles at the west of the island. There you can enjoy stunning beaches and wonderful swimming below Tavolara’s soaring cliffs. The protected warm waters offshore support abundant marine life and make for spectacular snorkeling.

Don your best outdoor gear for trekking adventures in the wild mountain terrain of Sardinia’s Supramonte. From the villages of Oliena and Orgosolo you can head off to explore the dense unspoiled oak woodland, threaded with gullies and ridges. The mountain itself is not high – its loftiest peaks rise up between the two villages to around 1,500 meters.

Ancient footpaths and tracks lead through the undergrowth of woods and clearings and there are innumerable springs and rivers. Their crystal-clear waters disappear underground before resurfacing either in the Oliena Valley, or in the dramatic Gola di Gorroppu, the deepest gorge in Europe. 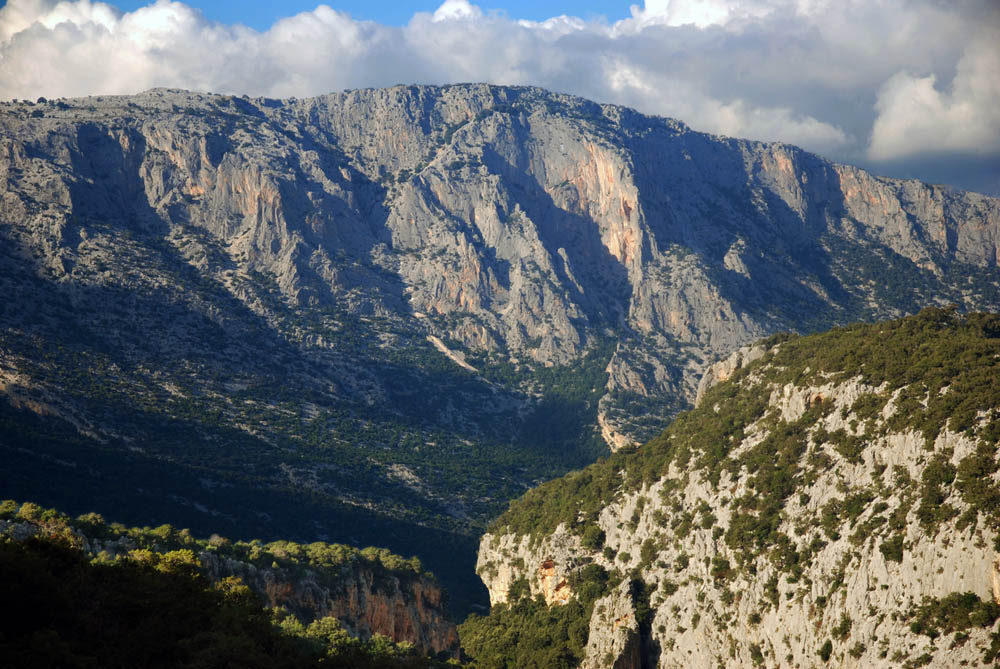 The rugged stretch of coastline between Porto di Arbatax and Porto Cala Gonlone on the east coast is one of the best places to visit in Sardinia. Boats can be chartered from both ports, preferably with a guide, as local knowledge is needed to negotiate rocky shoreline, hidden coves and sea caves. Pack a lunch, drinks, swimming costumes and sun cream for an unforgettable day out.

Beyond the otherworldly brick-red granite turrets of the Rocce Rosse of Capo Bellavista, and L’Isolotto dell’Ogliastra, the limestone wonders begin to unfold. Gulls, shearwaters and other seabirds encircle the towering cliffs, as wild goats move amid blotches of shrubbery. Around each jagged corner, limpid deep blue and green waters ripple over white pebbles. Small boats and gleaming super yachts drop anchor, and tanned sun worshippers wade to shore carrying supplies. Towards Cala Gonone, charter boats ferry day trippers to Cala Sisine and Cala di Luna, while in the intimate coves of Porto Pedrosu and Cala degli Innamorati, divers plunge in the shallower depths to spear fish and collect sea urchins. 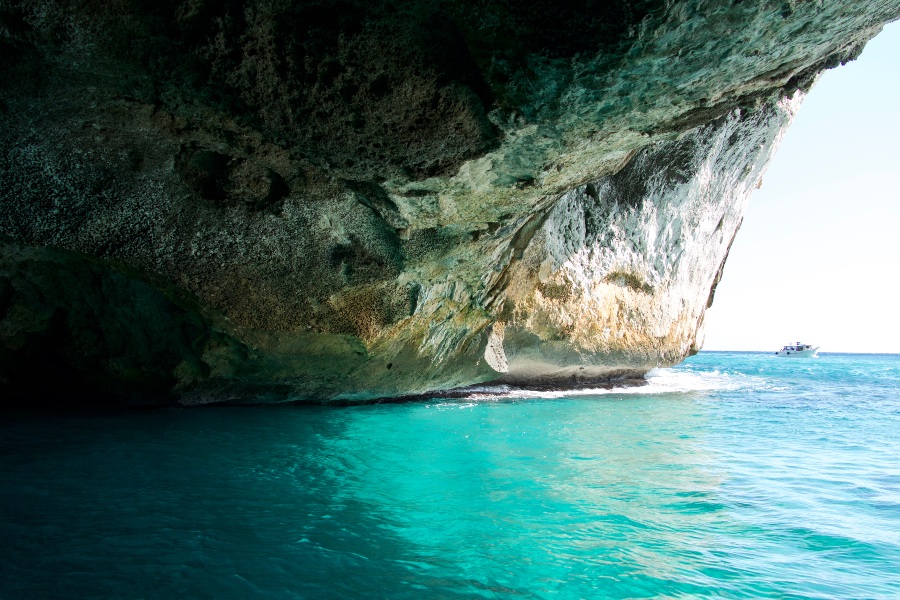 Cala Goloritzé is a Unesco World Heritage site on the Golfo di Orosei, a secluded and stunning sand and pebble beach out of reach of any roads. It takes 90 minutes of walking through centuries-old woods on a spectacular path that descends between canyons to reach the beach. But, as soon as you see the transparent, deep blue sea waters of Cala Goloritzè from the high plains above, you realize it was worth the trek. Limestone karst formations and sheer drops make it a dizzying spectacle. Climbers from all over the world come here to scale 120 meters (390ft) up the iconic Aguglia spire.

For a more leisurely approach to reaching the beach, board a boat at Santa Maria Navarrese or Cala Gonone. 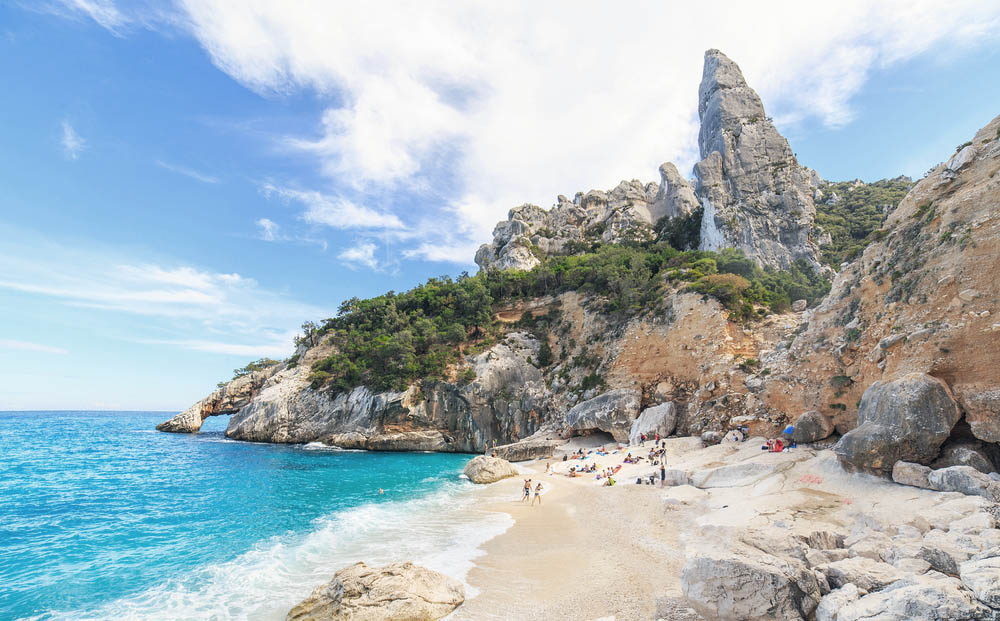 Ready to take a trip to Sardinia?

Insight Guides can help you plan and organize fantastic trips in Sardinia and around Italy. Simply get in touch with us to share your ideas for the trip and let us know when you would like to travel. Local travel experts will then create a personalized itinerary based on your preferences, which you can amend until you are happy with every detail before booking. Browse our existing itineraries in Italy for inspiration, and keep in mind that they can all be tailored to suit your specific requirements.