Top 8 wildlife highlights in the Galápagos

Forever associated with Charles Darwin and giant tortoises, the magnificent Galápagos Islands comprise the most famous nature reserve in the world. Home to a vibrant array of endemic species – here we take a look at some of the highlights of the islands’ unique wildlife inhabitants. 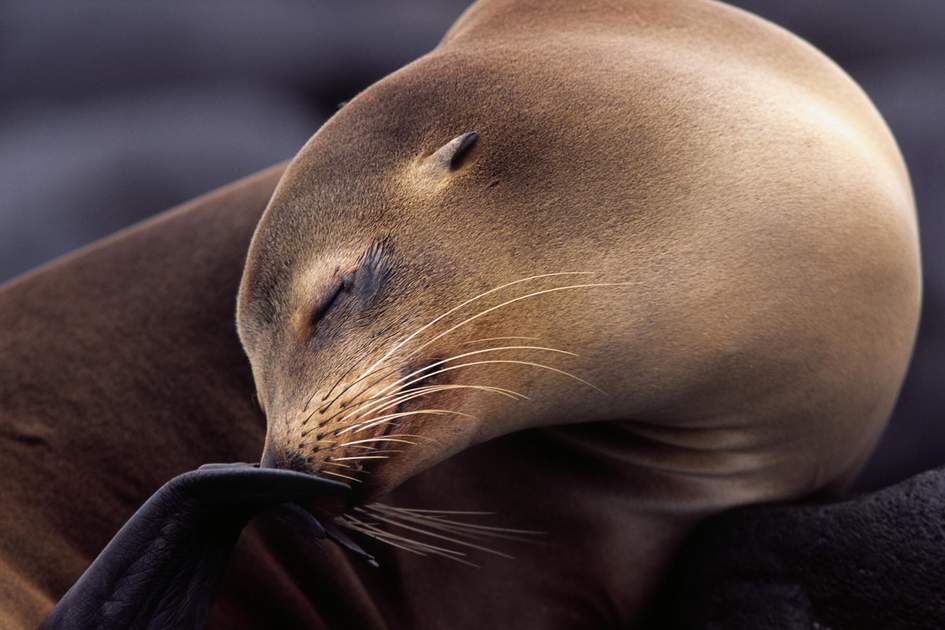 These remote volcanic Pacific islands are home to a host animals found nowhere else in the world. Walking in the footsteps of Darwin, a trip to the Galápagos offers opportunities to enjoy some truly unique wildlife experiences.

1. Get up close with giant tortoises on Santa Cruz Island

Perhaps the islands’ most famous residents, these gargantuan animals can live to be more than 100 years old. The giant tortoise is one of the most ancient of reptiles, but also among the rarest. It exists only here and on the island of Aldabra in the Indian Ocean. Weighing up to 250kg, it has two types of shell: the dome-shaped type is found in humid environments with abundant low vegetation, such as Santa Cruz Island, while the second type, with a shell resembling a horse's harness, lives on islands with uneven terrain like Española Island. The Charles Darwin Research Station on Santa Cruz has a successful giant tortoise breeding programme and visitors can view specimens, but it is better to see these enthralling creatures in their natural habitat in the island’s highlands.

Watch both land and marine iguanas as they sun themselves on volcanic cliffs and rocky shorelines. The most common land iguana is a fiery orange-yellow colour and feeds on low-lying vegetation, but easier to spot are the unique marine iguanas. The world’s only seafaring lizard, these black reptiles have adapted themselves to the ocean to feed on seaweed, often diving down to 12-metre depths to do so. 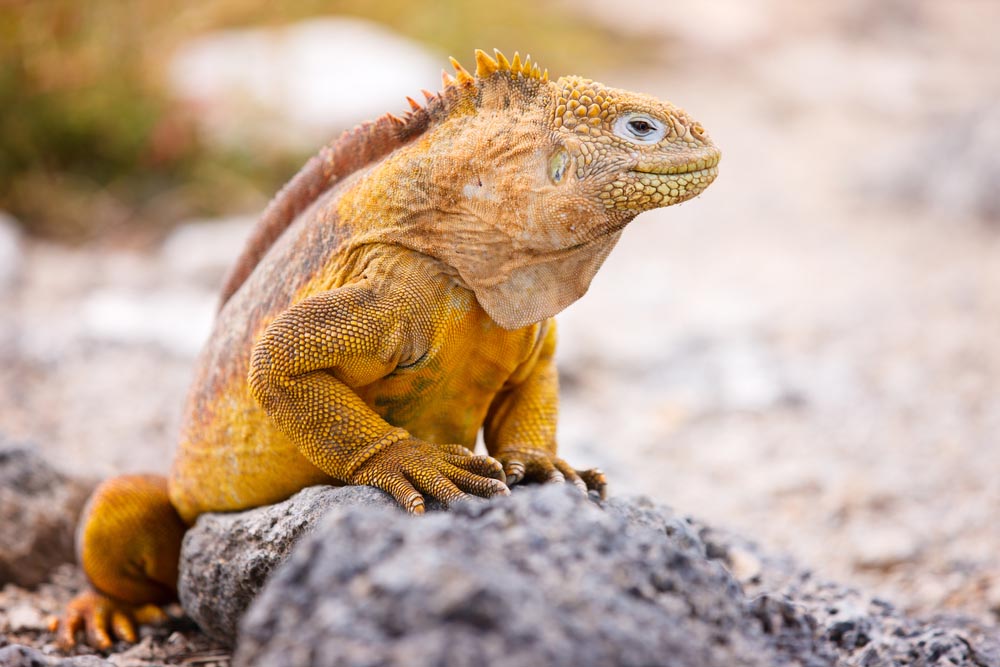 Take some time to admire these distinctive marine birds and their striking colourful feet. Although these boobies can be found across the tropics, many pairs come to breed in colonies on the Galápagos Islands. Their brightly coloured feet are used in a rather peculiar mating dance – males lift their feet up and down in order to entice a female counterpart.

Snorkelling around the islets off the north coast of Española Island and Galápagos rocky coastlines is a wonderful way to experience the spectacular coral reef and the marine life it supports. Floating on the surface of the ocean, you will be surrounded by many of the hundreds of species of fish recorded in the Galápagos. Schools of brightly coloured tropical fish pass over the sea floor and around the rocks, making a spellbinding sight. Hammerhead and white-tipped Galápagos sharks can also be seen in the waters around the islands, but they are not dangerous. Also keep an eye out for the different types of rays that glide majestically along the ocean floor – giant manta rays can sometimes be seen leaping out of the sea and landing with a loud slap on the waves.

The rare and endangered waved albatross is the world’s only tropical albatross. The species can be found solely on Española Island between April and December, so travel in-season to be sure you have a chance of a sighting. The world's entire population of yellow-billed, waved albatrosses nest and breed on the island. These magnificent creatures are famous for their extraordinary courtship displays, dancing about and 'fencing' with their beaks.  Eggs are laid during May, with chicks maturing in December when they leave the colony. 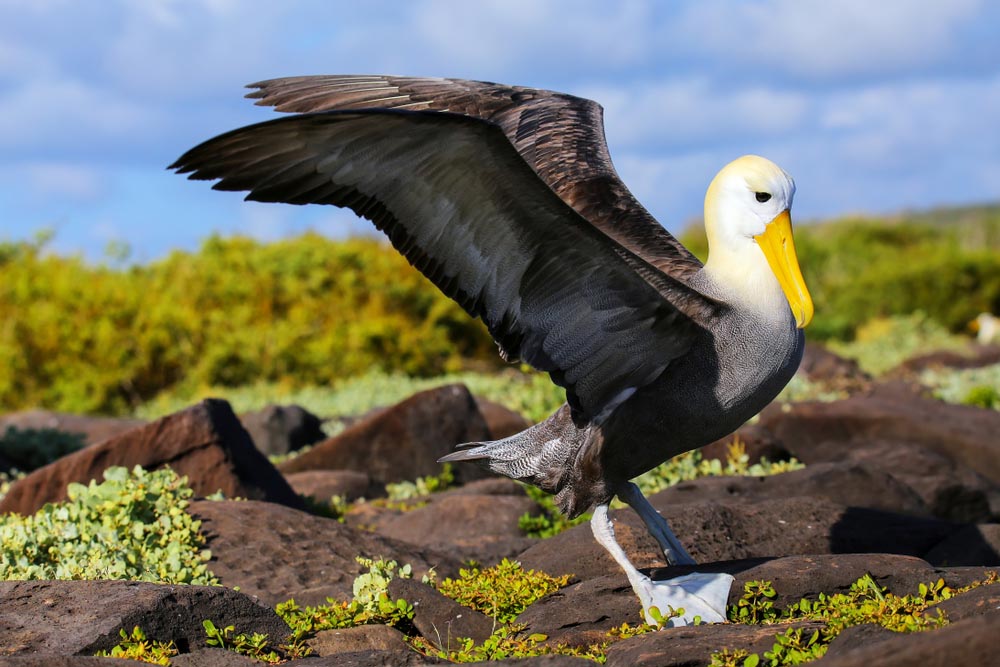 6. Visit a colony of Galápagos penguins

Stop off at Fernandina or neighbouring Isabela Island to view the endemic Galápagos penguins – the only wild penguins living in the northern hemisphere. These small and endangered penguins eat fish and tend not to stray far from their nests, clumsily waddling about on land, but speeding like a bullet under the waves. 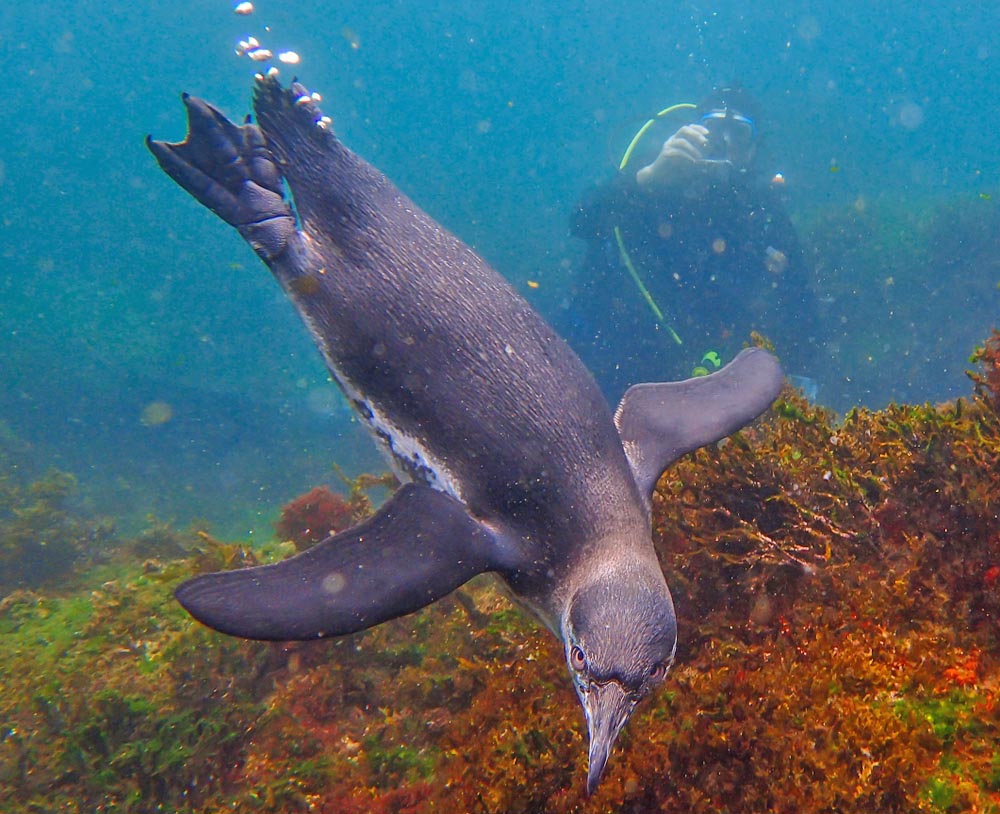 These impressive birds of prey, the only ones in the Galápagos, can mostly be seen soaring across the skies above the islands of Isabela and Fernandina. Galápagos hawks feed primarily on insects, rodents and small lizards, but they are opportunists, so will also snatch small iguanas, as well as tortoise and turtle hatchlings, given half a chance. While the male Galápagos hawk tends to be monogamous, the females of the species usually take more than five mates, each of which will take a turn at guarding her nest and incubating her eggs!

8. Relax with seals and sea lions on rocky Galápagos shorelines

Spend time savouring the sight of Galápagos fur seals and sea lions, which pepper the islands’ jagged coastlines. Both these species of sea mammals live in large colonies and feed mainly on fish. Sea lions are particularly sociable and communicative – you may well hear their playful barks as they bask on the beaches. However, male sea lions can be aggressive when staking out mating territory, sometimes fighting their rivals in order to retain it, so a degree of caution should be exercised in their presence.

Our local experts can help you to plan and book unforgettable trips to Ecuador and the Galápagos Islands. Simply get in touch to let us know your ideas for the trip and when you would like to travel. We will then create a personalised itinerary that you can amend until you're completely happy with every detail before booking. Take a look at our existing itineraries for inspiration, and keep in mind that they can all be tailored to meet your own specific needs.