Ernest Hemingway was one of the most famous and celebrated authors of the 21st century, winning both the Pulitzer Prize and the Nobel Prize for Literature. A man of big stature and personality who fell in love with Cuba, Hemingway was both a macho hunter and a disciplined writer… 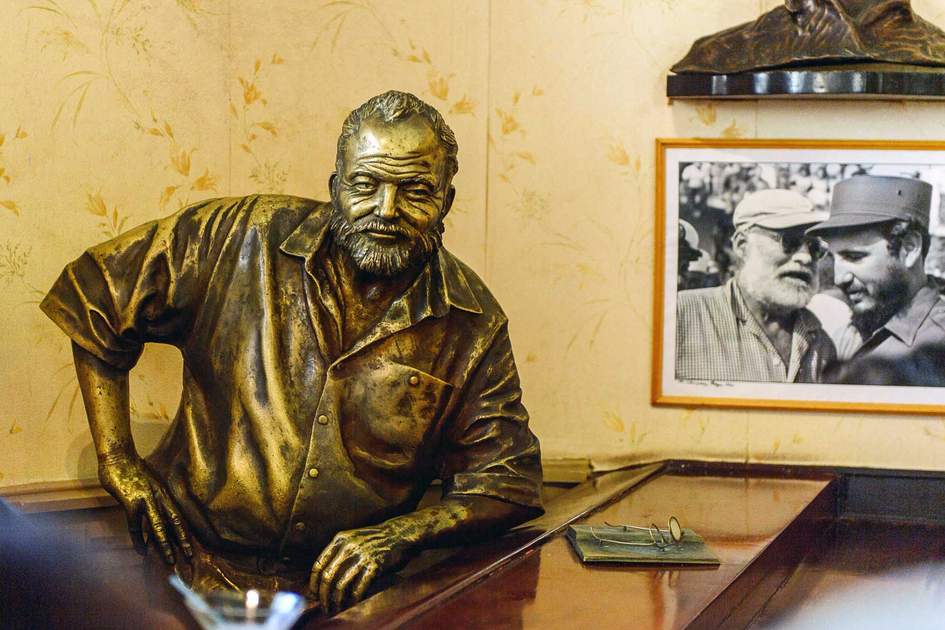 Ernest Hemingway was born on 21 July 1899 in Oak Park, Illinois. His childhood holidays, spent in the family cabin on Lake Walloon in northern Michigan, would nurture his life-long love of hunting, fishing and the great outdoors. Hemingway worked on his school newspaper; after he graduated, he took up employment as a journalist in Kansas City. His background in journalism influenced the direct and straightforward writing style that he is famous for.

After several failed attempts to enlist for the military (he was refused because of a problem with his eye), the teenage Hemingway was sent to Italy as an ambulance driver during World War I. His experiences there – including being injured, hospitalised and falling in love with a Red Cross nurse named Agnes von Kurowsky, who left him for another man – would provide inspiration for Hemingway’s second novel, A Farewell to Arms (1929), which received high praise. The theme of war is notable in many of Hemingway’s books, later influenced by his work as a newspaper war correspondent during the Spanish Civil War and World War II.

Following World War I, Hemingway moved to Paris, where he was welcomed into a circle of extraordinary literary minds, including F. Scott Fitzgerald, Gertrude Stein, T. S. Elliot, and James Joyce. He got to know the city, had time to write, and, when he was 25, published The Sun Also Rises (1926). The book was immensely successful, and Hemingway’s popularity and fame grew in Paris and further afield.

Hemingway’s love of adventure and the outdoors would stay with him, although accidents and injuries did affect his health. He  enjoyed big-game hunting in Africa, deep-sea fishing in Florida and Cuba, watching the bullfights in Spain, and even survived multiple plane crashes. Hemingway’s personal life was fraught and complex. He married four times, frequently leaving his wives for his mistresses, who he proceeded to marry and then repeat the cycle. It was with his third wife, Martha Gellhorn, that Hemingway purchased his house in Cuba – Finca Vigía – in 1940, where he remained for most of his life.

In his later years, Hemingway struggled with depression, anxiety and alcoholism. Mental-health issues were common in the family and Hemingway’s father Clarence shot himself in 1928; Ernest Hemingway declared shortly afterwards, ‘I’ll probably go the same way’. It was with tragic irony that on 2 July 1961, plagued by his demons and having lost the discipline and productivity needed to write, Ernest Hemingway himself put a shotgun to his head and pulled the trigger. 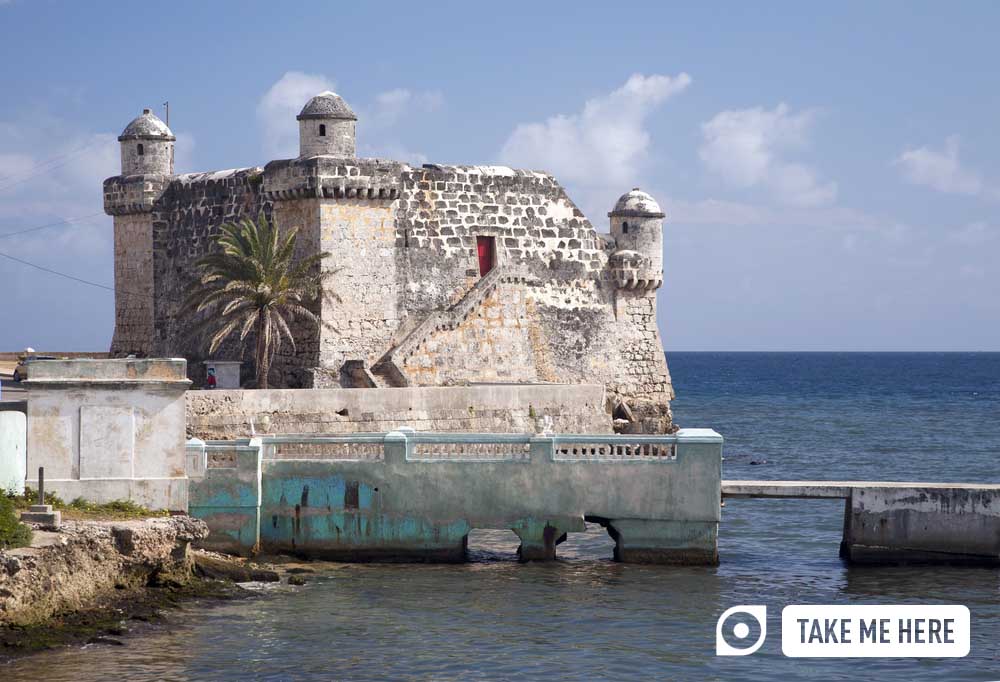 The Spanish fort, Torreon de Cojimar, in Cohimar, Cuba, which was an inspiration for Ernest Hemingway's famous novel The Old Man and the Sea. Photo: Shutterstock

Cuba’s combination of unlimited sensual pleasures, lawlessness and corruption ­– along with the frisson of danger – exerted an almost irresistible fascination for the many writers and artists who passed through Havana. From the 1920s to the 1950s, Havana was a playground for wealthy Americans seeking guilt-free sex, alcohol and gambling. The mafia and corrupt Cuban politicians joined forces to preside over this hedonistic era.

Ernest Hemingway visited Cuba throughout the 1930s for marlin fishing, and then moved to the Caribbean island permanently. Although he regularly drank himself into a stupor and could become aggressive, Hemingway’s streak of Midwestern puritanism was strong enough for him to remain largely innocent of the seedier side of Havana life at the time. It was here that Hemingway wrote seven books, including The Old Man and the Sea (1951), Islands in the Stream (1970, published posthumously) and A Moveable Feast (1964, published posthumously).

Havana is one of the most exciting capital cities in the world, where five centuries of Cuban history coalesce with the merging of peoples from Europe, Africa, China and, of course, the Americas, a city saturated with romance, nostalgia and intrigue. Slightly dilapidated in parts, it’s all part of the charm. It is easy to see why Hemingway fell in love with this city – like he did Paris and Spain – a place brimming with life, soul and passion.

The former fishing village of Cojímar, 10 miles (16km) from Old Havana, is popular for its Hemingway connection, but has unfortunately seen better days. The seafront took a battering in the 2008 hurricane, and the wharf where Hemingway kept his boat, the Pilar, was smashed. Hemingway used the village as the setting for The Old Man and the Sea and celebrated his Nobel Prize here in 1954. There is a bust of the author made from boat propellers donated by local fishermen and housed in a gazebo by the cube-shaped Spanish fortress, now occupied by the military. 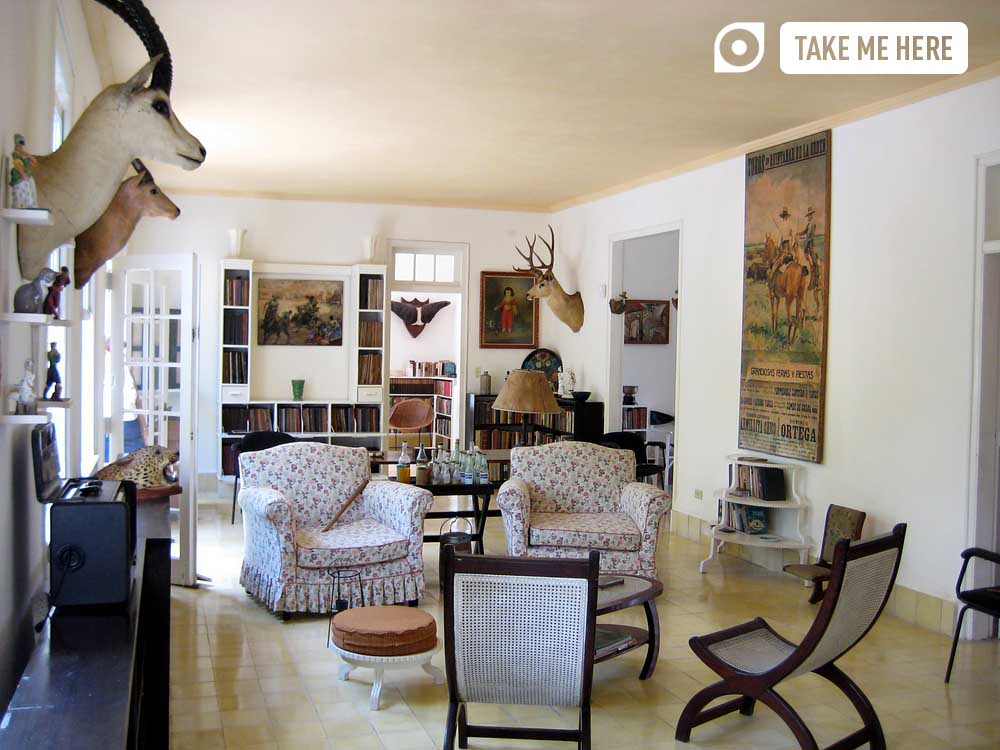 The interior of Ernest Hemingway's house, or Finca Vigia, at the city of Havana. Photo: Shutterstock

Journalist Martha Gellhorn, soon to be Hemingway’s third wife, was not content to live in a room at the Hotel Ambos Mundos. She found a house called Finca Vigía – a former cattle farm on the site of a Spanish fort. The couple bought it in 1940 for US$18,500, and, although Gellhorn later divorced him, Hemingway stayed on at the Finca for most of his life. The house lies at the end of a long, leafy driveway and is surrounded by lush gardens. The views over Havana are splendid.

The mansion looks much as he left it, but was meticulously renovated by a joint US–Cuban project to restore the house and preserve the author’s papers. Among the relics are 9,000 books, Hemingway’s original Royal typewriter and innumerable bull-fighting posters and animal heads – mementoes from Spain and Africa. Visitors can only look in through the open doors and windows, but you get an excellent view of the large, airy rooms and their contents.

El Floridita was made famous as Ernest Hemingway’s favourite haunt (it features in his novel Islands in the Stream). It is claimed that the Daiquirí cocktail was perfected here, though it was probably originally invented in Santiago province as an anti-malarial potion for miners. Certainly it was at El Floridita that the drink became famous, and Hemingway even invented his own version, the ‘Daiquirí special,’ which is still served. To discover Hemingway’s Havana for yourself, book onto Insight Guides’ Havana: History and Hemingway tour today.

Not much else is the same as in Hemingway’s day, when it was an informal, old-fashioned place, with ceiling fans and a three-piece band. Today it has been renovated and polished up into one of the most expensive restaurants in Cuba, with a life-size bronze statue of Hemingway near his favourite seat, on the far left of the original wooden bar. 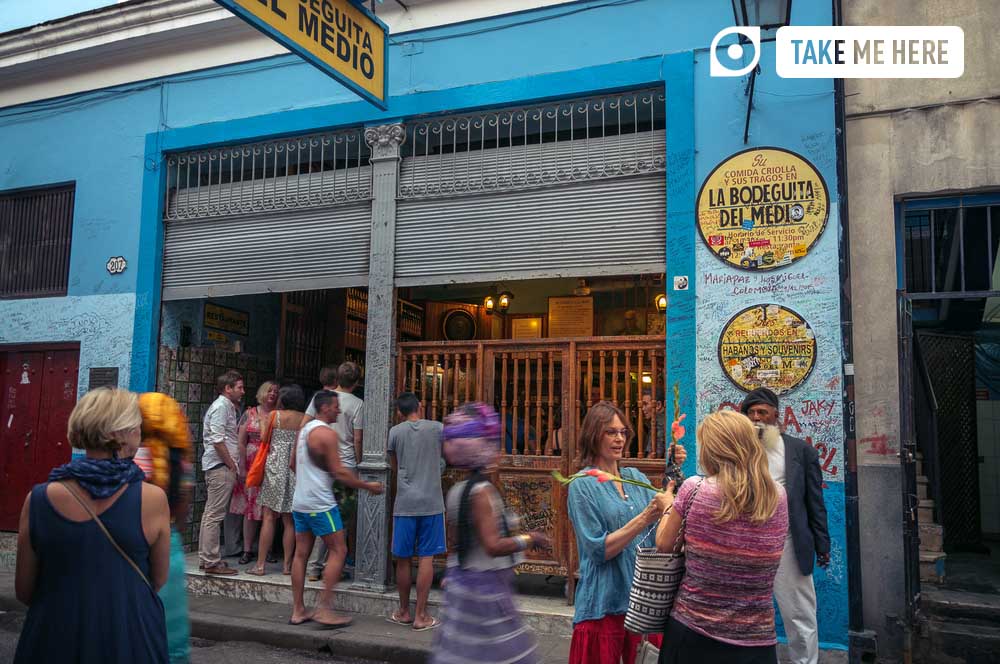 La Bodeguita del Medio is one of the most famous restaurants in Havana. Photo: Shutterstock

This bar and restaurant started life in 1942 as a grocer’s shop. The story is that poets and writers from a nearby print shop used to drop by to check their galleys here, so the owner first offered a few drinks, then lunch. Gradually, more and more tables were set up, until the place became frequented by talented writers such as Alejo Carpentier, Nicolás Guillén and Hemingway himself.

Today, La Bodeguita is still informal and atmospheric, although the only Cuban bohemians here are likely to be working as waiters. Photos and memorabilia from famous diners clutter the walls, which have been tattooed with so many signatures that they are almost black. A sign over the bottles in the front bar was supposedly written and signed by regular customer Ernest Hemingway: ‘My Mojito in La Bodeguita, My Daquirí in El Floridita.’

At the Hotel Ambos Mundos on Obispo you can visit room 511, where Hemingway wrote For Whom the Bell Tolls. The room is tidily kept, with an antique typewriter (though not Ernest’s) and several copies of 1930s US magazines. The rooftop bar is a regular stop on the tour-group trail. The public areas of the hotel have been extensively refurbished and there is a wonderful piano bar in the lobby.

If you are planning a trip to Cuba, Insight Guides can help with the planning, organising and booking of your trip. Simplycontact us with details of the length of your trip, budget and places you would like to visit and we will put you in touch with a local expert who will plan a personalised itinerary for you. Alternatively, browse our existing Cuba trips. Just remember that all these trips are fully customisable – you can add stops to one (or all!) of these beaches to all of our trips, all you need to do is ask!

Every day was another experience.